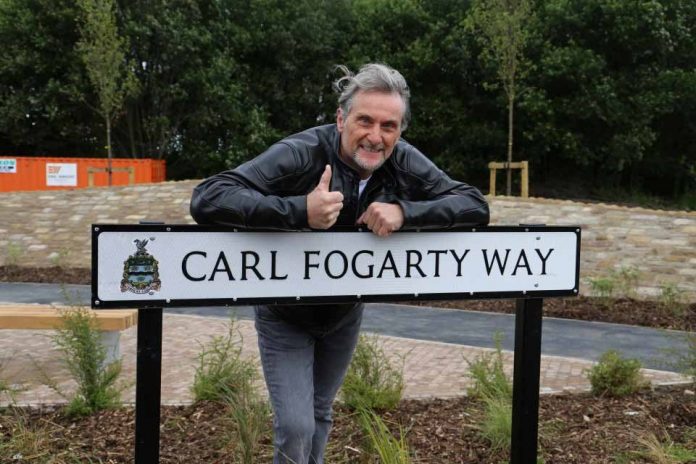 Four-time World Superbike Champion Carl “Foggy” Fogarty has a road named after him in his Blackburn hometown.

The road is named “Carl Fogarty Way.” To officiate the road, Fogarty wheelied past the ribbon, instead of the usual cutting with scissors.

Only one way to open #carlfogartyway ..and that’s on the back wheel..😈👍 #WheelieWednesday ⁦@CCMMotorcycle⁩ #Blackburn pic.twitter.com/fgh5liKg6R

His name is still famous among bikers, especially Ducati owners. It was Fogarty who dominated WorldSBK for a number of years, scoring 59 victories and ultimately four WorldSBK crowns.

He began racing for Honda in the Formula One World Championship for motorcycles and transitioned to the World Superbike series in 1988. He switched to the Ducati 888 in 1992 but inconsistency saw him finishing in ninth.

He continued with the Ducati 888 in 1993 and exhibited the kind of fiery determination that won him an army of Ducati fans. He would go on to win 11 races and stood on the podium 4 other times. This was when his intense rivalry with American racer Scott Russell began. However, Russell would prove to be more consistent and beat Fogarty to the title for Kawasaki’s first superbike crown.

Ducati released the game-changer for 1994, called the 916. Fogarty immediately found the bike suited his high mid-corner speed riding style and won 10 races and 4 podiums in a total of 22 races to snatch the title from Scott Russell and Kawasaki.

Fogarty would repeat his dominance in 1995. Out of 24 races, he only finished off the podium 3 times and retired twice. He won 13 races and no lower than 2nd in the other 6 times.

But a certain team, specifically Honda kept pounding on the point that the Ducati V-Twin had 166cc more displacement than their 750cc RC45 V-Four. There were also certain quarters and riders who charged that Fogarty had won the championships due to the superiority of the Ducati.

Seemingly to prove them wrong, Fogarty went back to Honda in 1996. He won four times on the RC45, three more than long time Honda rider Aaron Slight but again consistency did him in. He eventually finished fourth.

He returned to Ducati in 1997 and fought season long with ex-GP rider John Kocinski. He eventually finished second to Kockinski.

Year 2000 saw the undoing of his racing career as he hit privateer Ducati rider Robert Ulm. The crash caused Foggy multiple injuries including a shoulder injury that never really healed enough for him to race again.

But that didn’t keep him away from the racetrack. Foggy became the manager for the Foggy PETRONAS team, hence the creation of the PETRONAS FP1.

There are still more exploits of the plucky Englishman to list here, but we hope to still see him in the motorcycle industry.