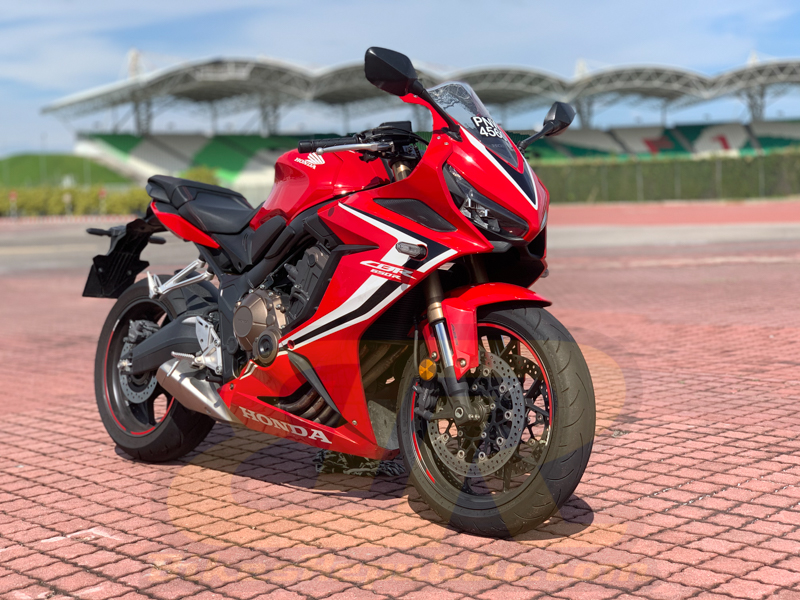 Gone is the “diamond” shaped headlight, replaced by a pair of super-bright LED headlamps and an upper cowl which gives the bike an unmistakable shape. In fact, even we thought we were looking at the 1000cc model when the CBR650R rolled toward us.

There are a number of updates, as well. The new bike now has upside down Showa Dual Bending Valve (SDBV) forks; revised rear suspension, an LCD screen which resembles the one from the CB1000R, new wheels, seats, taillight. The new bike is also 5 kg lighter than its predecessor. 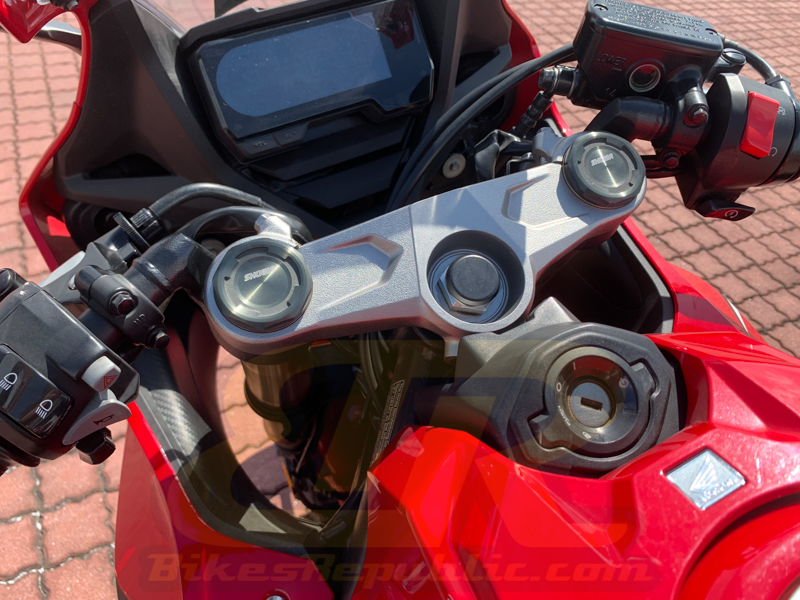 The engine was also reworked. The 650cc, DOHC, inline-Four has a new ECU and higher rev ceiling, among other things, bumping power up to 95 hp from 90 hp.

All that aside, the revised ergonomics was perhaps the best news. Honda moved the clip-ons forward by 30 mm and dropped them slightly. The rider’s footpegs were relocated by 3mm rearward and 6mm higher. Standard seat height was kept at an accessible 810 mm. 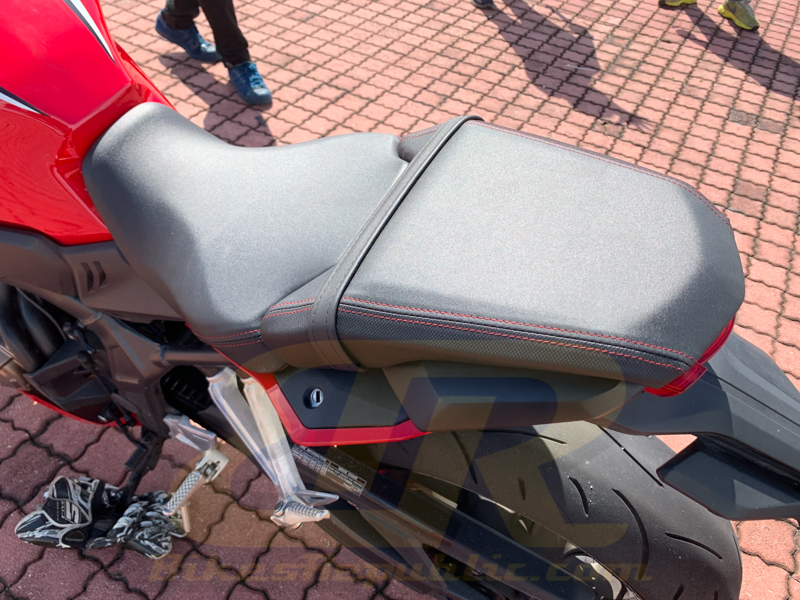 The new ergonomics was immediately apparent as soon as we got on. It gave us a riding position that had us “embracing” the bike rather than being perched on it. It felt a whole lot more “normal” than the weird position of the old bike. The old bike placed us low in the seat while the handlebars were somewhere between neither sporty nor comfortable. The new seating position is sportier but gave a more natural reach to the handlebars, so that your palms are not pressed onto them.

The new ECU kicks the engine into life with a deep VROOM. The engine was pretty silent without much mechanical noises, too. 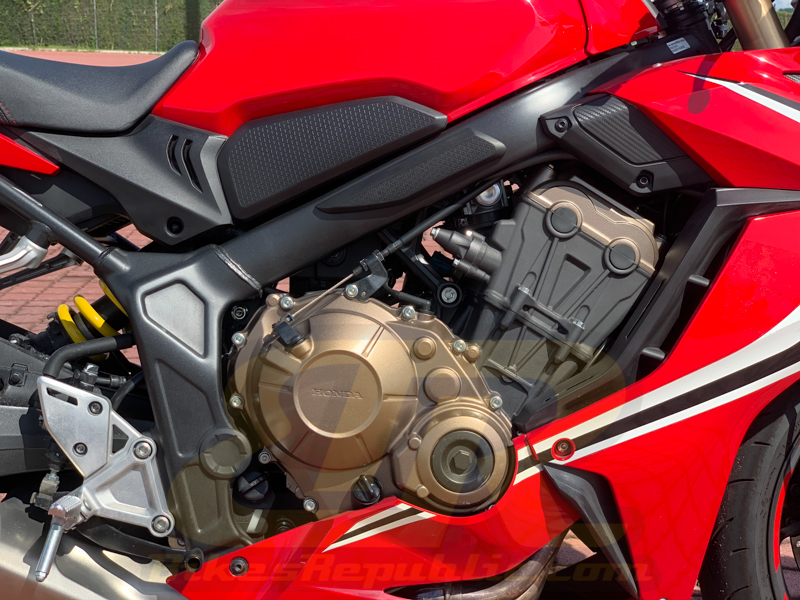 There is traction control albeit a basic type without different modes. ABS is standard.

The clutch needed some getting used to as it engages very near the end of the lever’s travel. Some adjustments later gave the lever plenty of freeplay, instead.

Let out the clutch, add some gas and the bike pulls away hard from idle and all the way through its rev range. The exhaust note starts with a roar rather than a howl. These aspects surprised us as they were the opposites of 600-650cc inline-Four bikes. In fact, the engine felt a whole more like a three-cylinder engine, given its urgent torque. The way it punched forward and that roar and subsequent howl from the exhaust made us think of the CBR1000RR. 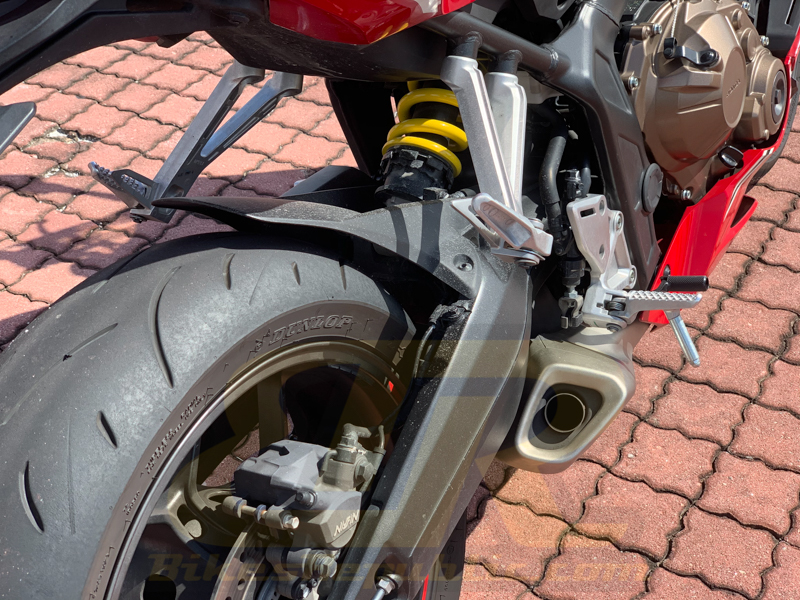 The 600cc inline-Fours we tested in the past needed to revved past 5,000 RPM for any meaningful acceleration. It’s this point that 600cc inline-Fours received a bad reputation in other countries as being gutless. That’s why other manufacturers such as Kawasaki and Yamaha went to the two-cylinder format, instead.

Not so the CBR650R. It had plenty of pulling power in its midrange, as well. As such, we found ourselves riding through heavy traffic in fourth or fifth gear, without needing to downshift often. Just crack the throttle open and the bike takes off. 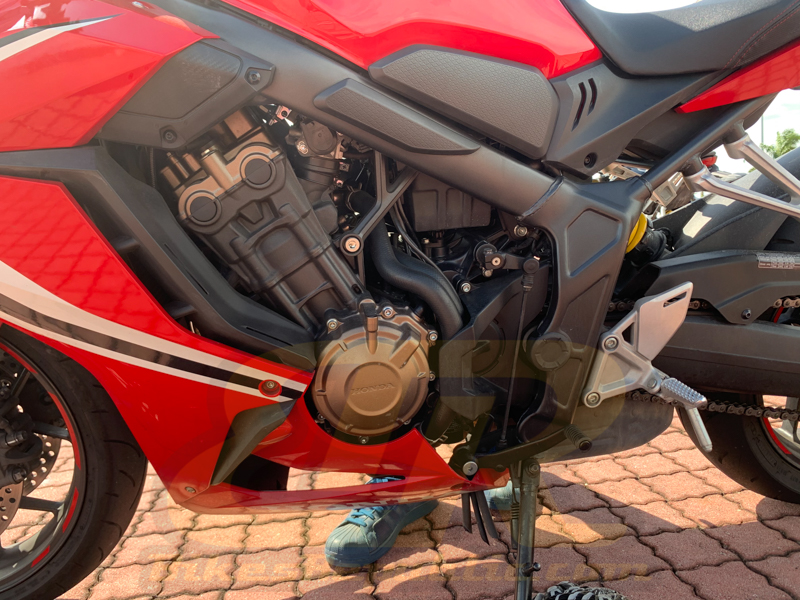 As for the handling, whereas the previous bike’s was “okay” the new bike’s would slay plenty of other bikes when maneuvering and cornering. The revised ergonomics makes the bike feel like a 250cc bike between the legs and arms, letting you chuck the bike around with abandon.

Coupled with its light weight, the bike absolutely flew through corners. 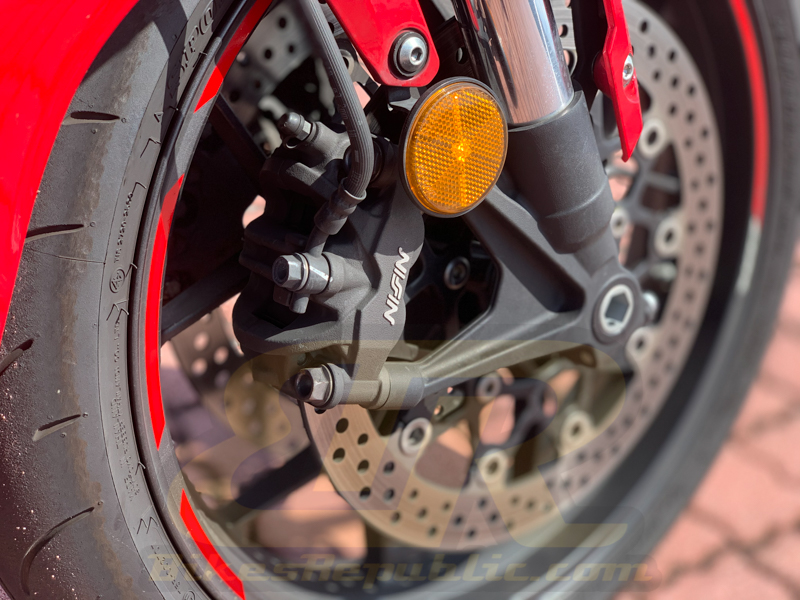 But! That was after we adjusted the rear suspension. Remember, the CBR650R may have a number of “R” but it isn’t an out-and-out sportbike like the CBR600RR. Instead, it’s a daily “sporty bike.” In its standard setting (or that some previous tester had adjusted it), the rear shock’s preload had the rear end of the bike squatting too much. In fact, it looked like the rear part of the belly pan was near the ground.

In this setting, too much weight was shifted to the rear and the handlebars wiggled as we neared maximum lean. Cranking up the preload (by 4 positions on the ramped adjuster collar) of the shifted some weight to the front, allowing the bike to steer much quicker and become more stable at deep lean angles. 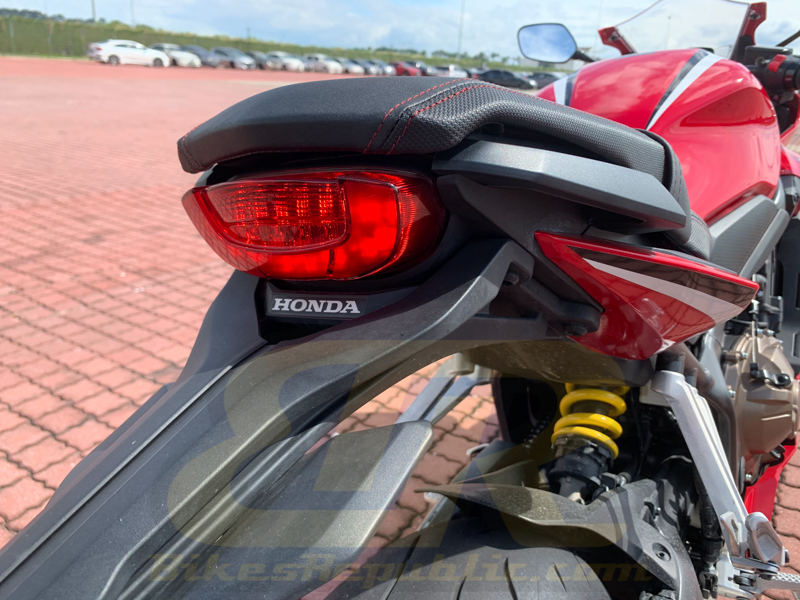 Again, being an everyday bike meant that the suspension was a little soft in terms of compression damping. Consequently, it felt harsh when contacting large bumps as there was too much rebound damping, instead.

The lack of compression damping in the forks made them dive like crazy during hard braking, which had the rear of the bike wriggling about. It’s exciting if you’re bred on MX or supermoto, but scary if you’re a new rider. 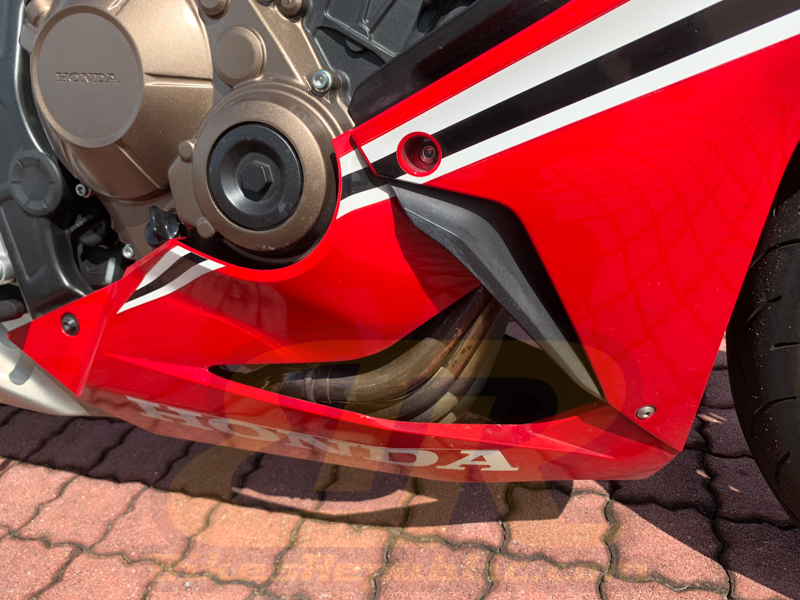 It may not be a big deal for prospective owners, but it needs to be reworked by a suspension specialist if you intend to ride it at the track. (This writer is considering to buy one for track use.)

One last note before we end this review. That engine is super frugal on petrol! 12 litres of RON 95 usually returned around 250 km despite our hamfisted riding i.e. hard acceleration and high running speeds (140 to 170 km/h) on a consistent basis. 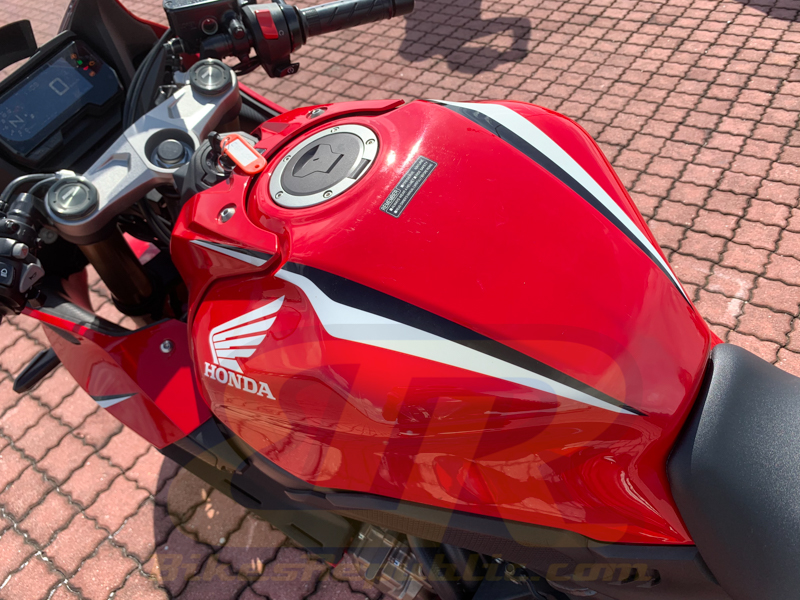 The 2019 Honda CBR650R is as good as it gets for a bike of this category and price point. Don’t compare it to the supersports bikes like the Kawasaki ZX-6R or Yamaha YZF-R6, or the upcoming Aprilia RS 660 as those are pure sportbikes. The CBR650R is an everyday bike, on the other hand.

As per the RM 45,000 sub-700cc category, it’s the best handling and powerful bike. It’s worth the money, hence why we call it the Baby Fireblade. 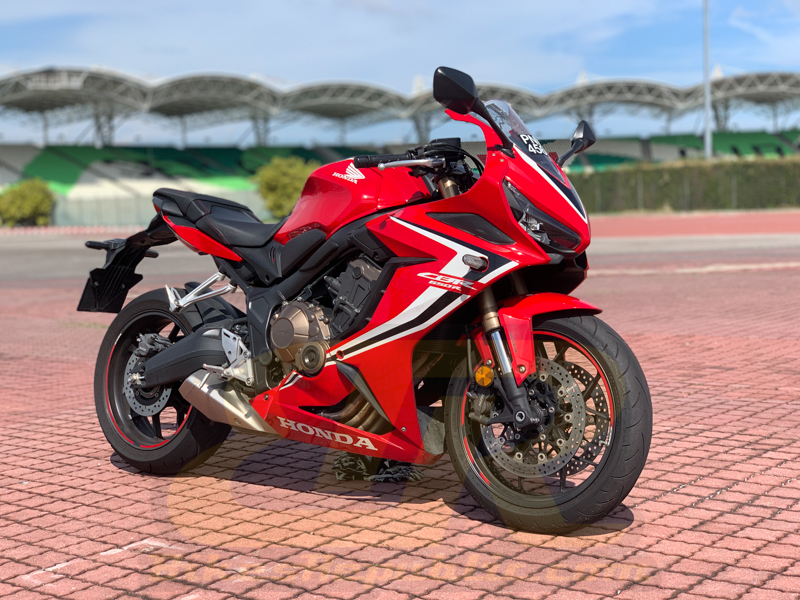