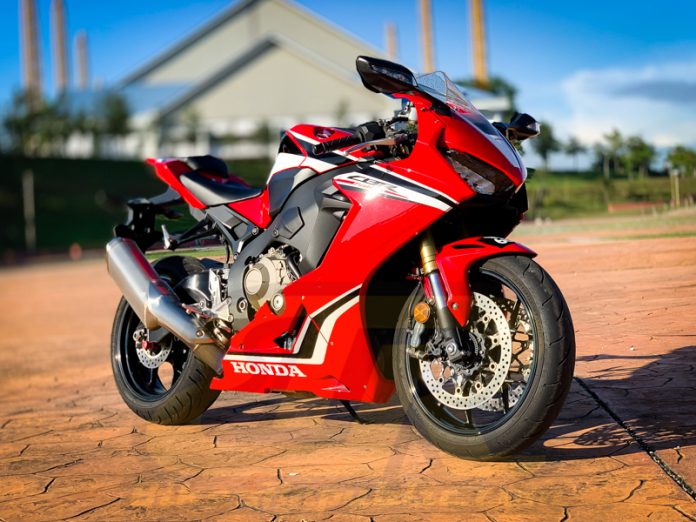 First and foremost, it’s the base model for the SP which we tested earlier. Of course, the SP was all spec’ed-out including Öhlins electronic suspension with OBTi user interface, Brembo monobloc calipers, Brembo brake discs, quickshifter and a single seat. The fuel tank was titanium, so was the exhaust system. The SP was cosmetically different, too, with gold wheels, polished aluminium frame spars and HRC tri-colour racing scheme.

On the other hand, this base model makes do with Showa Big Piston Forks and rear shock, Tokico monobloc front brake calipers, anodized black frame and wheels, dual seats. Electronics wise, it doesn’t have the OBTi suspension controls since the suspension is manual. Most tellingly, it doesn’t include a quickshifter. 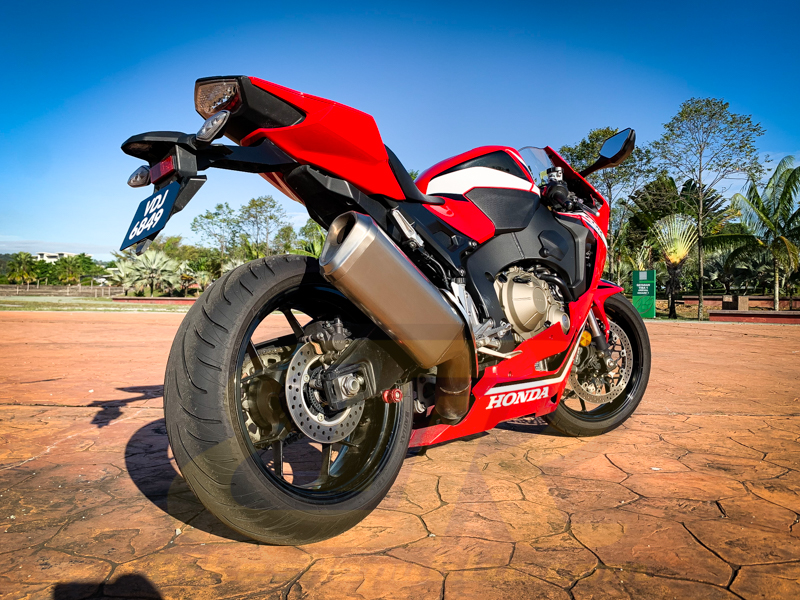 Does that make the bike less “better”?

Ergonomics is exactly the same, as with the engine power and performance.

Firing it up exuded that soul-stirring deep vroom from the exhaust, telling you that it’s ready to ride. Setting the electronics was easy-peasy, given three preset modes and two user-customizable modes. From left to right, there’s P for power (1 highest, 5 lowest); T for traction control (1 the least intervention, 8 the most); W for wheelie control (1 for highest intervention, 3 for the least); EB for engine braking (1 the least, 3 the highest). That’s it. One look and you know how the bike will respond. 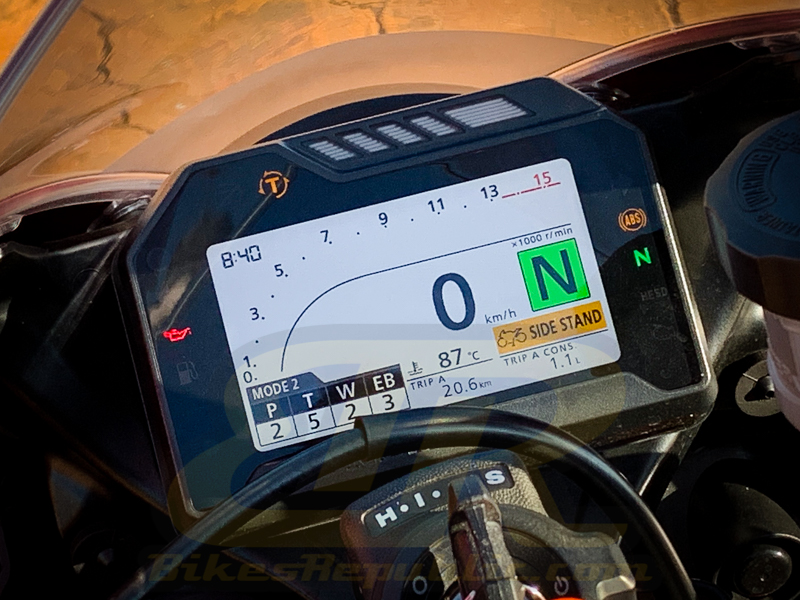 Each setting returns really perceptible changes. For example, the bike takes off as soon as the throttle was twisted in Level 1, whereas you need to turn the throttle more in Level 5. But if anything, engine braking (EB) showed the biggest change. In level 1, the bike almost freewheeled (great for attacking corners) while the bike slowed a lot off the throttle in level 3.

Although not electronic, the factory suspension settings were already in the ballpark. No, wait. They were superb. We found that we didn’t need to adjust anything at all. Only once did it get of shape as I had to brake hard when keeled way over in a corner, because a car cut into my lane. The forks dived hard, causing the bike to wobble. However, adding just two turns of compression and rebound damping solved the issue. 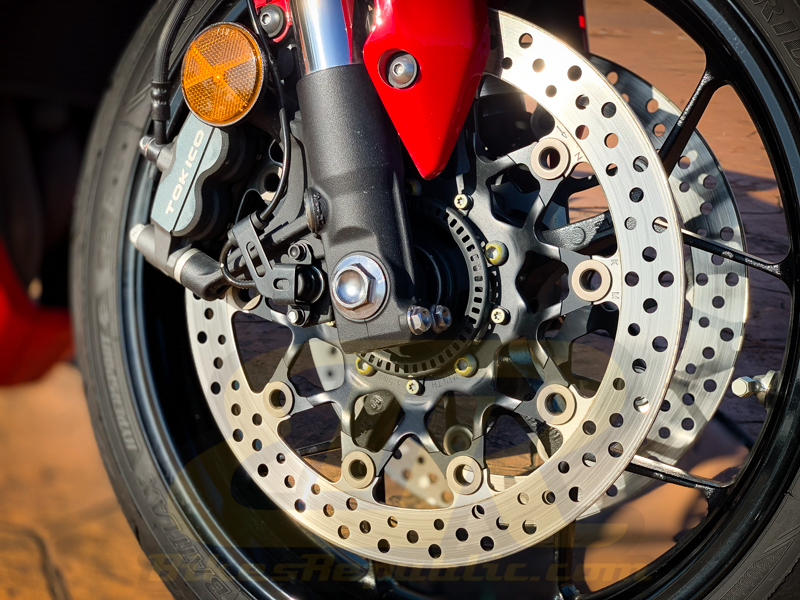 Compared to the electronic suspension, the biggest difference was that the manual suspension felt soft in its initial stroke but was stiffer when you hit larger bumps. It’s the true opposite for the electronic set up. Yet, the CBR1000RR’s suspension was the most compliant on the street as opposed to all other superbikes we’ve ridden.

The bike isn’t slow, not at all. It’ll own everything thrown against it because it’s so easy to ride on the street. While you need more effort on other bikes, the CBR took all steering efforts in its stride. Think it, turn in. 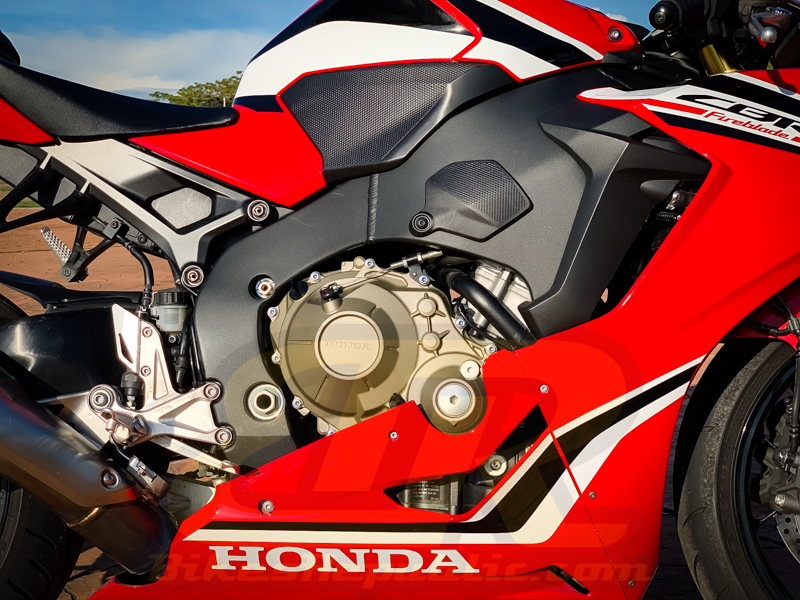 In corners, the softer suspension settings let the tyres bite into the road surface and hook up early just as you add balancing throttle. That confidence goads you into opening the gas sooner without the risk of pushing the bike wide. I found myself adding too little throttle many times during the initial two days of testing, but I was punching in plenty of throttle soon enough.

There’s a corner on MEX Highway which I’ve never ridden through faster than 160 km/h (on the KTM 1290 Super Duke GT). One day, I hammered the CBR through it to see how far I could lean the bike. I looked down and saw 188 km/h and the knee was still far away from the road! 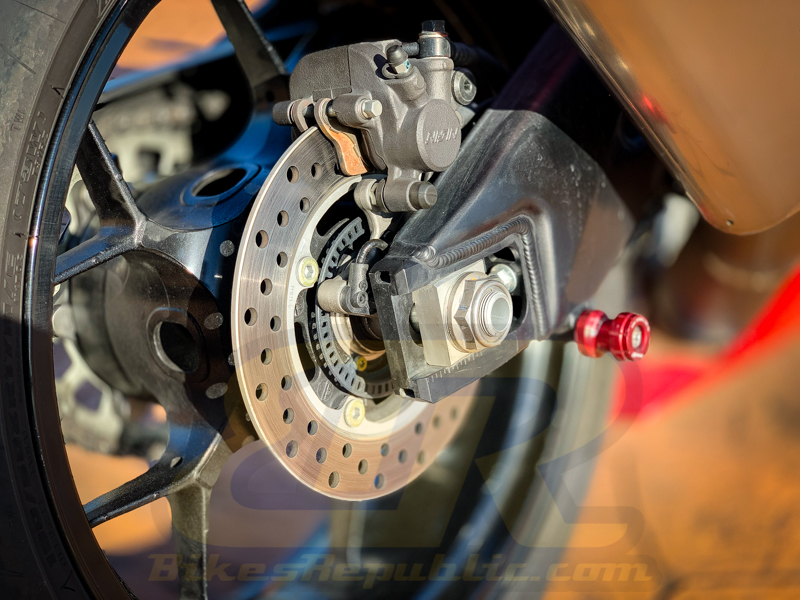 But it isn’t all about aggression. Feel the need to cruise? Just raise your body, switch to MODE 3 and putt along in sixth gear. The bike happily obliged even when we rode it at 80 km/h in sixth. Not only it didn’t stutter but it pulled hard as soon as I opened the throttle. From there it would blow through 100 km/h, 150 km/h, 200 km/h and all the way.

That inline-Four has gobs of low-down and midrange torque unlike its contemporaries. It punched hard from the standing start and acceleration only slowed down a little (just a little) past 8,000 RPM. Hard acceleration was accompanied by a mix of warble and whoosh from the intake with a howling and roaring exhaust, as if it was a small V-Four. The stock exhaust was loud enough – all the better for such a distinctive tone that’s totally different from all other inline-Four superbikes. 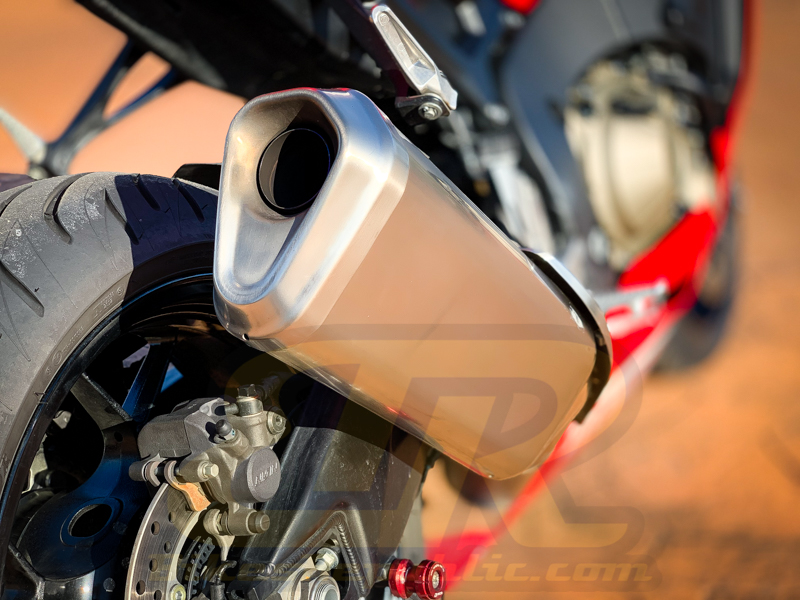 But it wasn’t all about aggression.

It’s so easy to ride in any circumstance, including in heavy traffic. Whereas I found it difficult to maneuver other sportbikes in really slow traffic, I could cilok (swerve around) on the CBR1000RR like a Honda CB250R. I’m not kidding! Even U-turns were easy because there was plenty of steering lock. Carrying a passenger wasn’t much of a bother, either.

That’s the central theme to the Honda CBR1000RR Fireblade. The CBR1000RR team wants to give the rider Total Control. Total control breeds confidence, and confidence turns to enjoyment. Total control also means that the bike is forgiving. 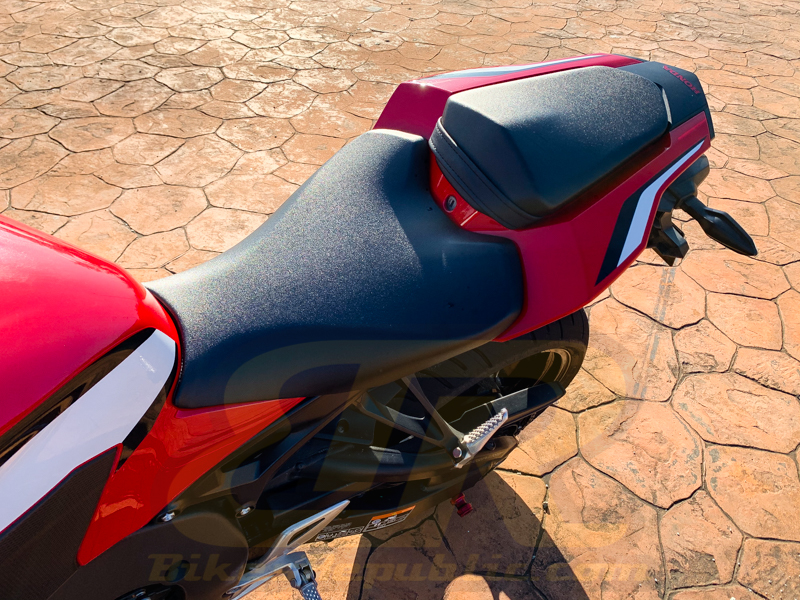 You’re always in control with those clip-ons positioned just right in relation to the seat. While other superbikes have their handlebars placed on the same level as the seat, the Fireblade’s are about 2.5 cm (1 inch) higher. In doing so, it gives the rider more leverage on the bars as well as better comfort, without sacrificing sportiness.

The more I rode the bike, the more I discovered that it’s Honda’s obsession with the little details. For example, like the previously mentioned abundance of steering lock and ergonomics. Going further, the design of the fuel tank made it easy to hook your upper arms and knees to it when you’re leaning into a corner. Apart from that, the seat height was at a comfortable level, yet the footrests didn’t touch down at all. 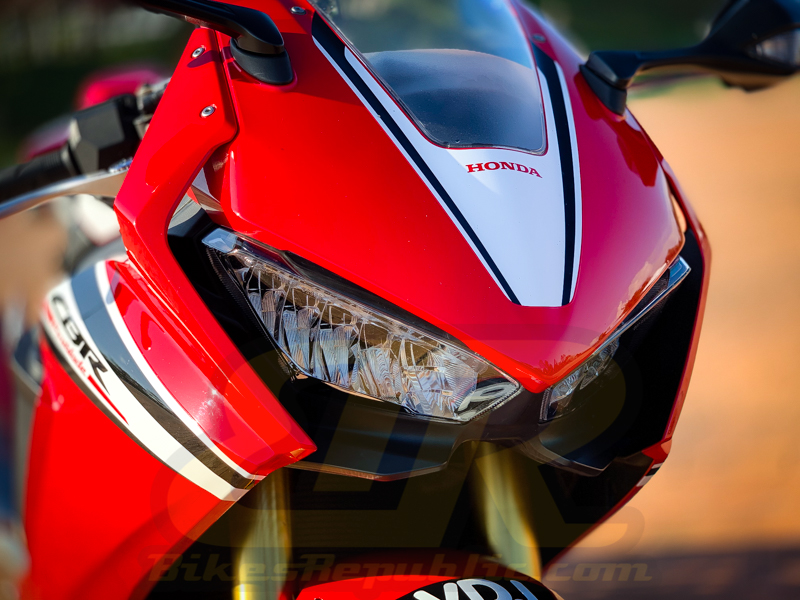 Honda also showed their obsession with quality and finish. Look down into the space between the TFT screen and handlebar and all you’d see is the clutch cable. No wayward cables and parts. Even the steering damper’s hidden away underneath the fuel tank’s cover.

Was there anything we didn’t like? Not really, but we know that detractors will bash the lack of a quickshifter. What? You’ve forgotten how to shift gears? Just joking. But trust us: You won’t miss it. The first two gears and downshifting may require the clutch lever but hooking up the next gears without the clutch was almost as good as using a quickshifter. It felt more rewarding too. The clutch pull was very light anyway, requiring on the middle finger to work it. 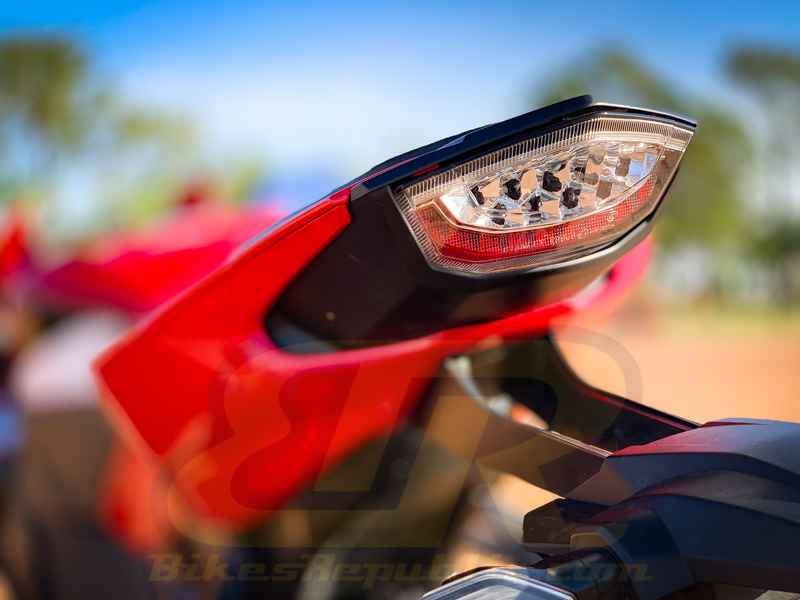 Another point excuse we always heard is the lack of top end power. The CBR1000RR has the lowest in the class at 189 hp. But unless you want to race the bike in MSBK or MSF, why does it bother you? What’s more important is the bike’s ability to accelerate faster from idle and while rolling compared to the others.

Let’s also not forget that the bike looks great from every angle. 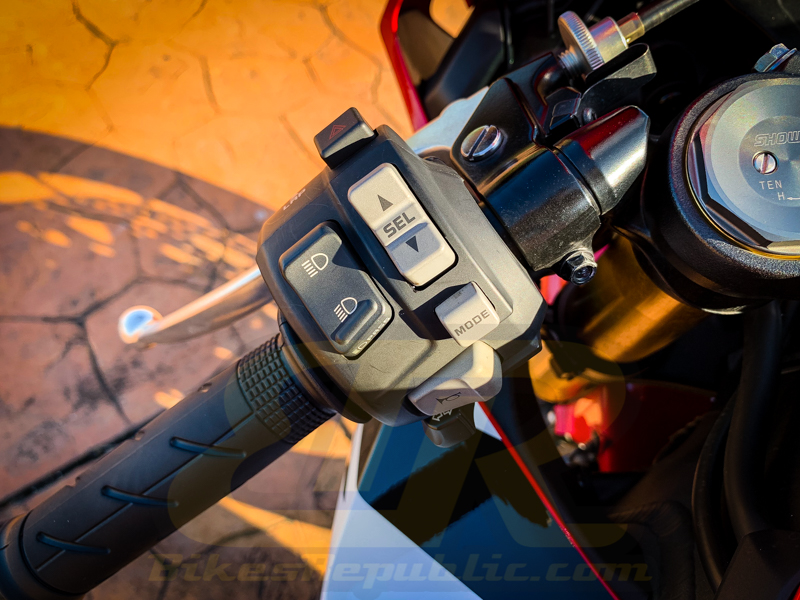 It’s apparent that the Honda CBR1000RR Fireblade was designed to do almost everything as a sportbike. By that we meant that you could ride it everyday while carrying a pillion, head into the mountains on weekends or convoy, and still be able to turn and burn at the track. 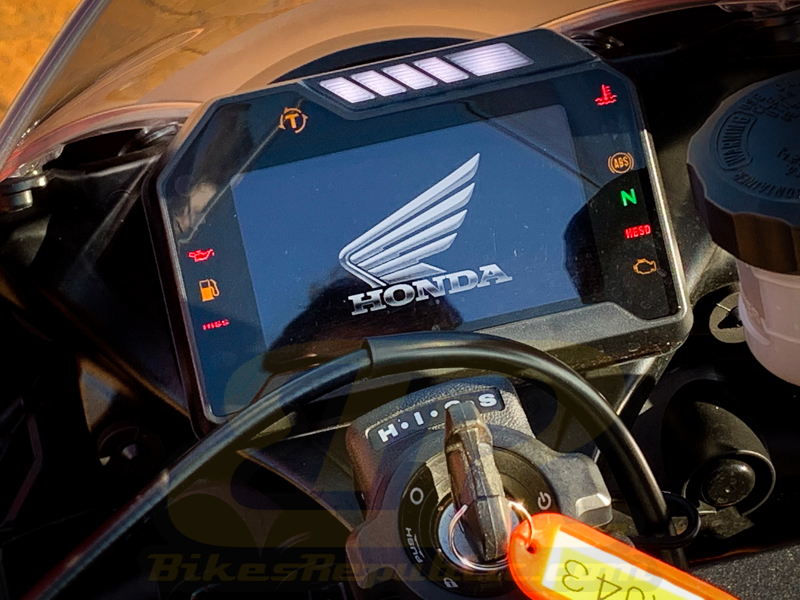 So, if you can only own one 1000cc sportbike that you have to use for everything, this is the bike.