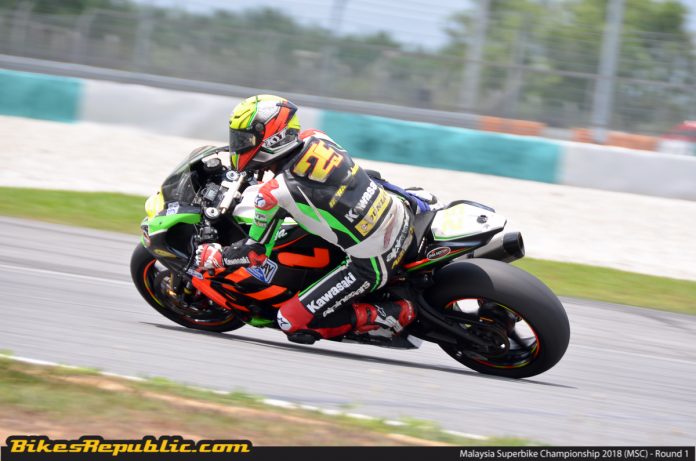 It had been a start of sorts for Chia Motor PJ but what mattered at the end was the win they had expected in Round 1 of the 2018 Pirelli Malaysia Superbike Championship (MSBK).

The team’s new rider, Azlan Shah Kamarulzaman, who also races in the Asia Road Racing Championship (ARRC) and previously Moto2, had dominated practice and qualifying before the start of today’s proceedings. 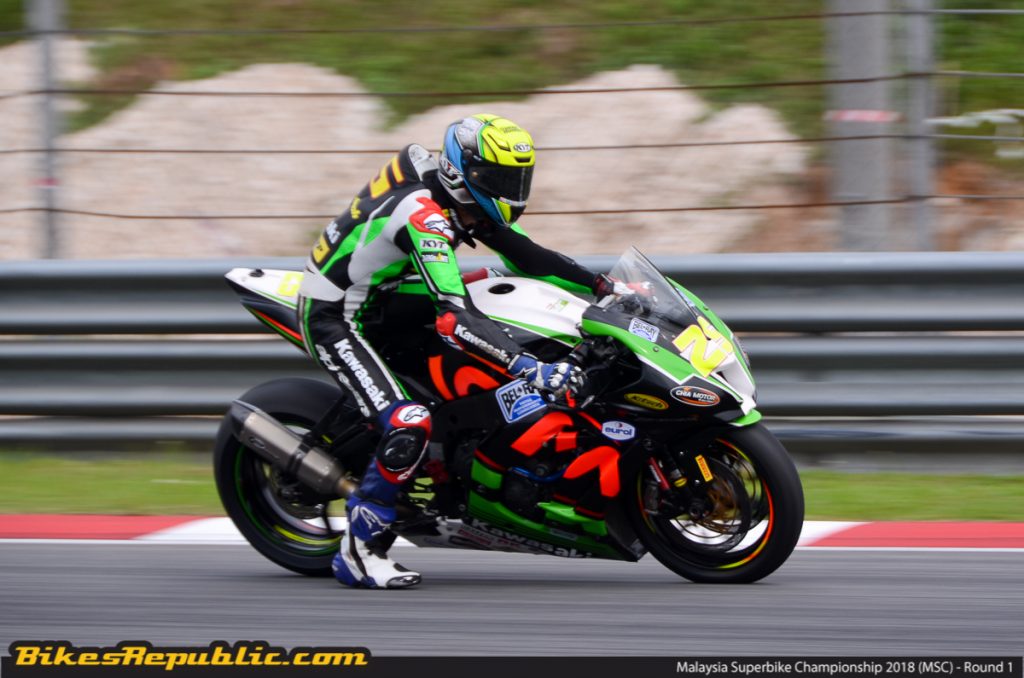 But a heavy downpour in the morning prior to the start of Race 1 of the Superbike category made the going around the Sepang International Circuit tricky. As anyone who had ridden at SIC before could attest, while the rain had stopped when the pitlane opened, the track was still wet with many unseen wet patches. One corner may be dry but charging into the next one could have you highsided into space.

The race was declared a WET RACE and pit crews hurriedly mounted full wet Pirellis onto their motorcycles. 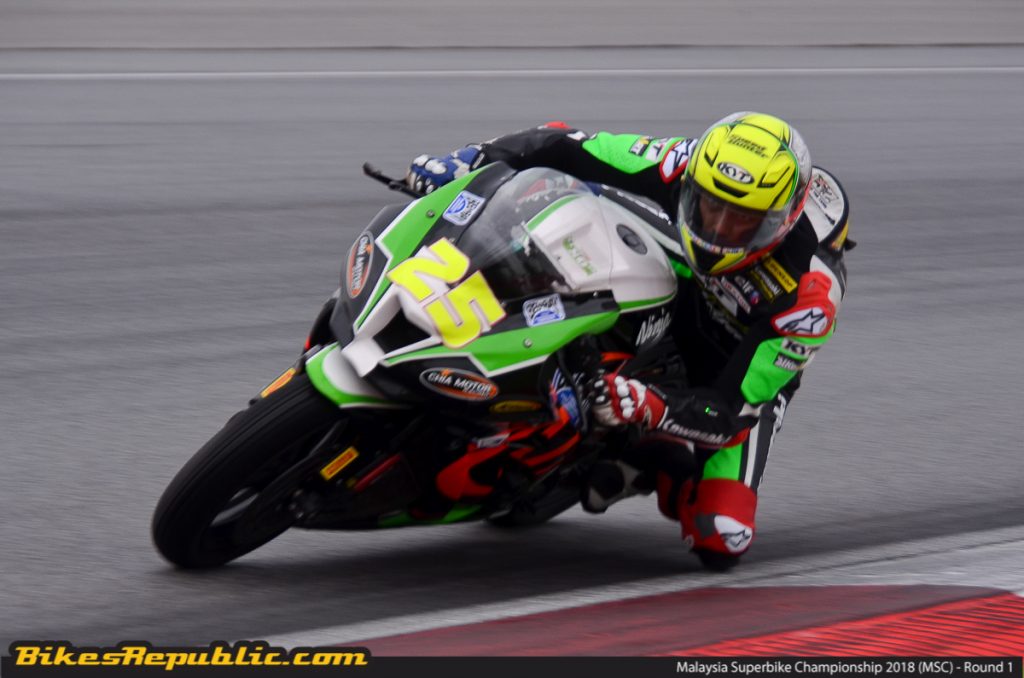 As the crew took to the starting grid, there were cautious smiles, if you could call it that, since this was Azlan’s first ride for the team. Each rider has a peculiar riding style, hence settings to the next guy and it takes time to develop a trust: for team, the rider, the bike, the equipment. 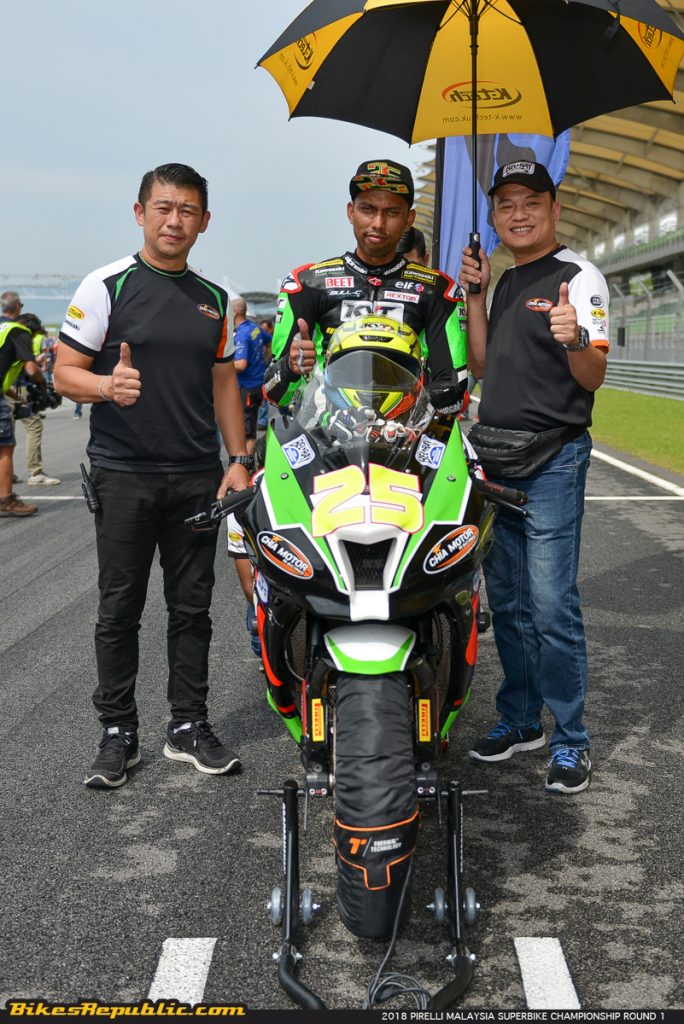 As soon as the lights turned to green, Azlan’s rear tyre was clearly spinning away and fishtailing. It was also apparent that his bike was squirming around under braking. There was even speculation that Azlan had gone out on slicks.

The affable rider was forced to slow down.

In the pits, worried faces crowded around a TV monitor as MSBK ex-champion and ex-Chia Motor PJ rider, Rajini Krishnan overtook Azlan and pulled a healthy lead. Even the ever-smiling Team Boss, Keith Chia (better known as “Ah Kit”) was glum. The entire team was quiet – dropping a spanner now would sound like an IED going off, despite the howls of bikes passing at high speeds. 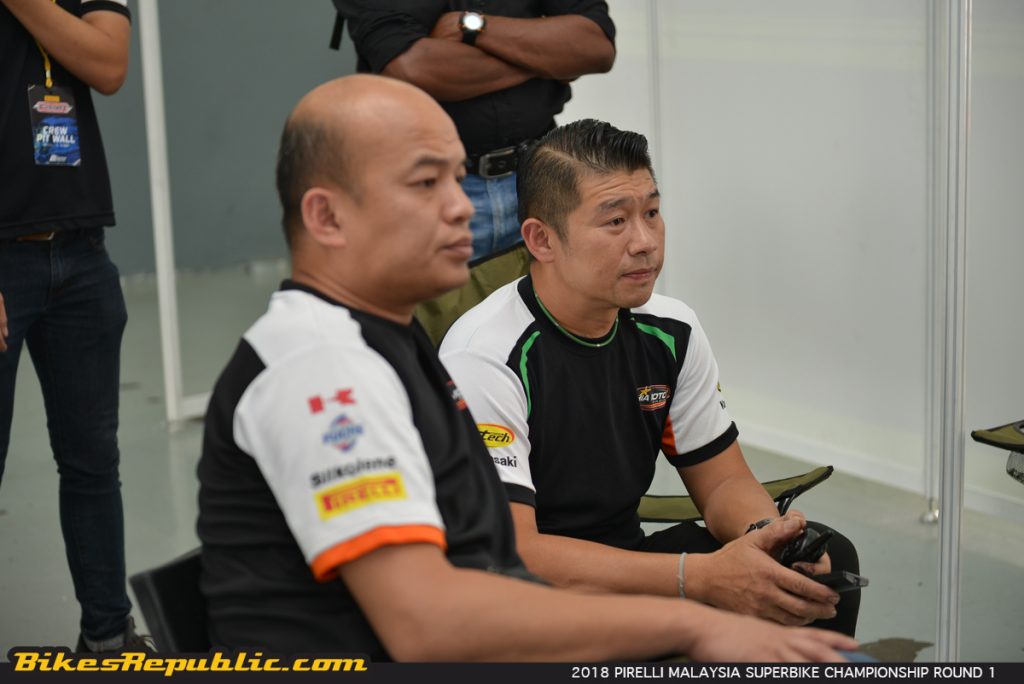 Azlan was soon on the verge of falling into the grasp of the fourth-placed runner, but managed held on.

At the checkered flag, it was Rajini first, Ramdan second and Azlan third. 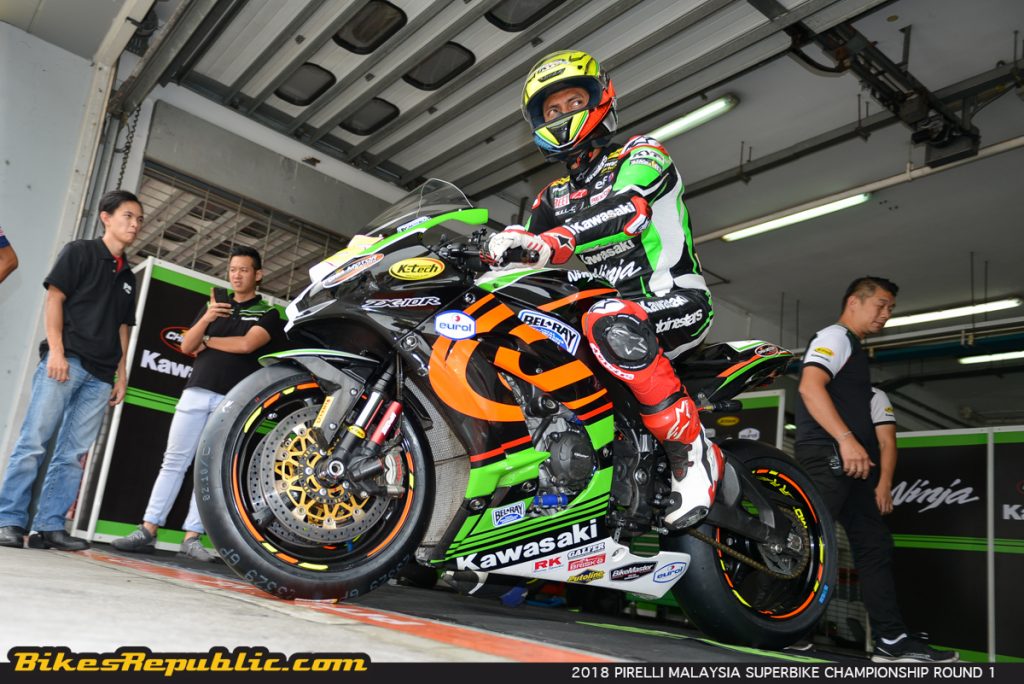 “We couldn’t get the proper level of traction control dialed in for the first race. The Kawasaki ZX-10R is a really powerful bike and the rear tyre started to slide around as soon as Azlan touched the throttle,” said Keith after the race. “It’s better to finish and earn some points,” he continued.

That’s right, to win you have to first finish the race. 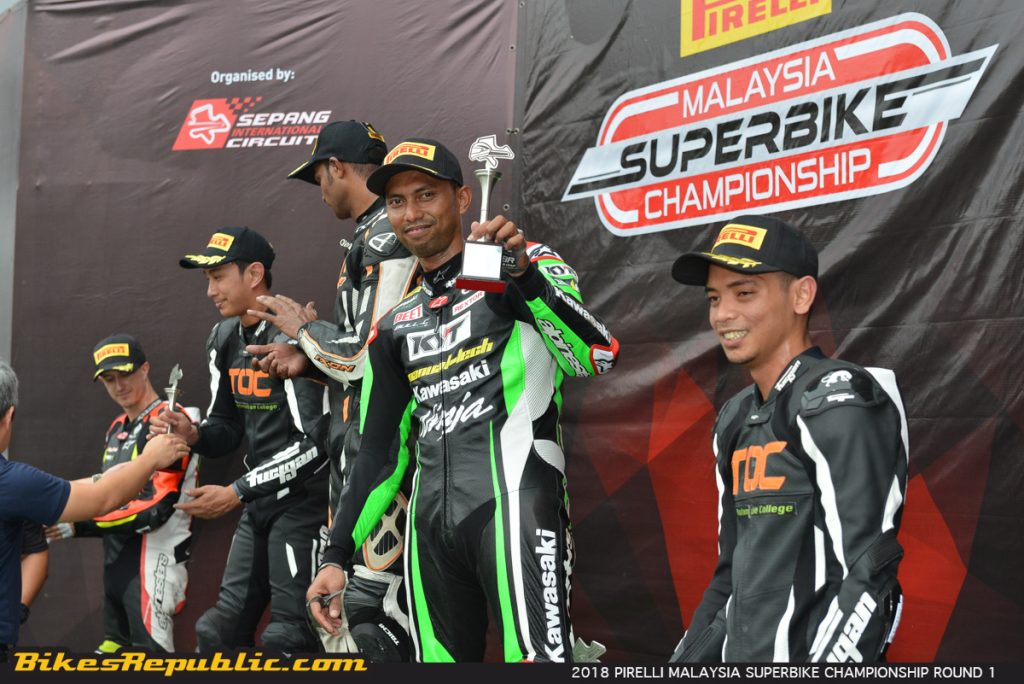 Later in the afternoon, all eyes in the Chia Motor PJ pits were again glued to the TV monitor in the pits during the SuperSport race, which preceded Superbike Race 2. The did so to observe the track’s condition and behavior of the bikes currently racing, in order to base their last-minute set up and tyre choice for Race 2.

Some sunshine filtered through the clouds halfway through SuperSport Race 1, sending the Superbike teams into another frenzy of activity to replace the wets with dry tyres. 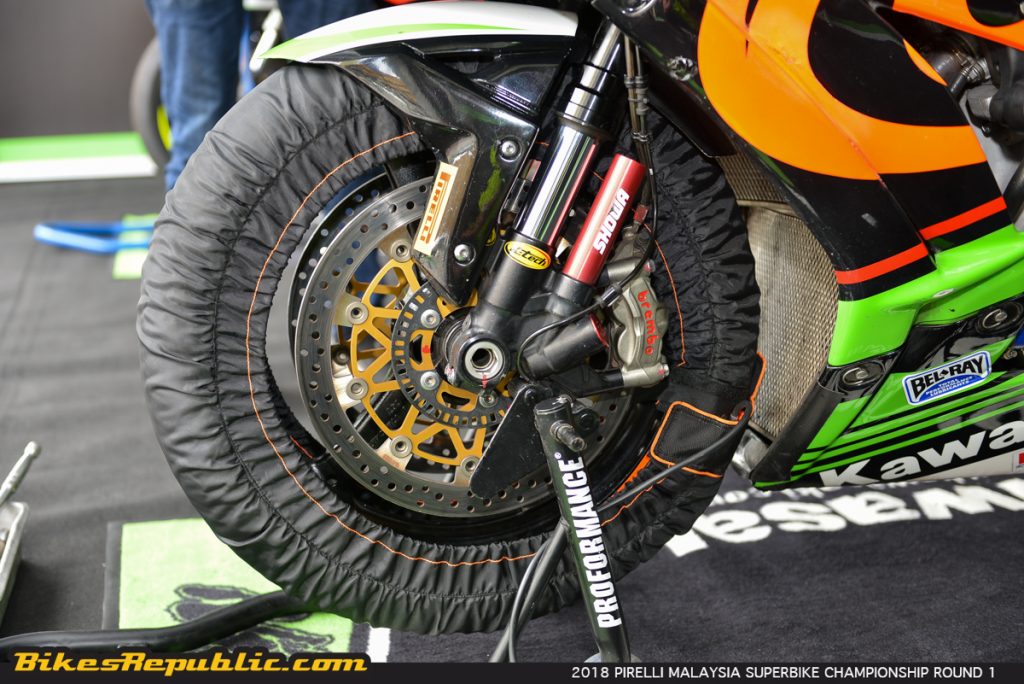 Azlan, Ramdan and Rajini aced their starts and pulled away from the rest of the field almost immediately. Azlan led past the line to start Lap 2, but suddenly Rajini was missing and the camera picked him up in the gravel trap at Turn 1.

Ramdan tried to give chase at that point but the combination of Azlan’s riding skill and the Kawasaki prepared by Chia Motor PJ proved too much – Azlan went 2 seconds faster per lap to claim the checkered flag. 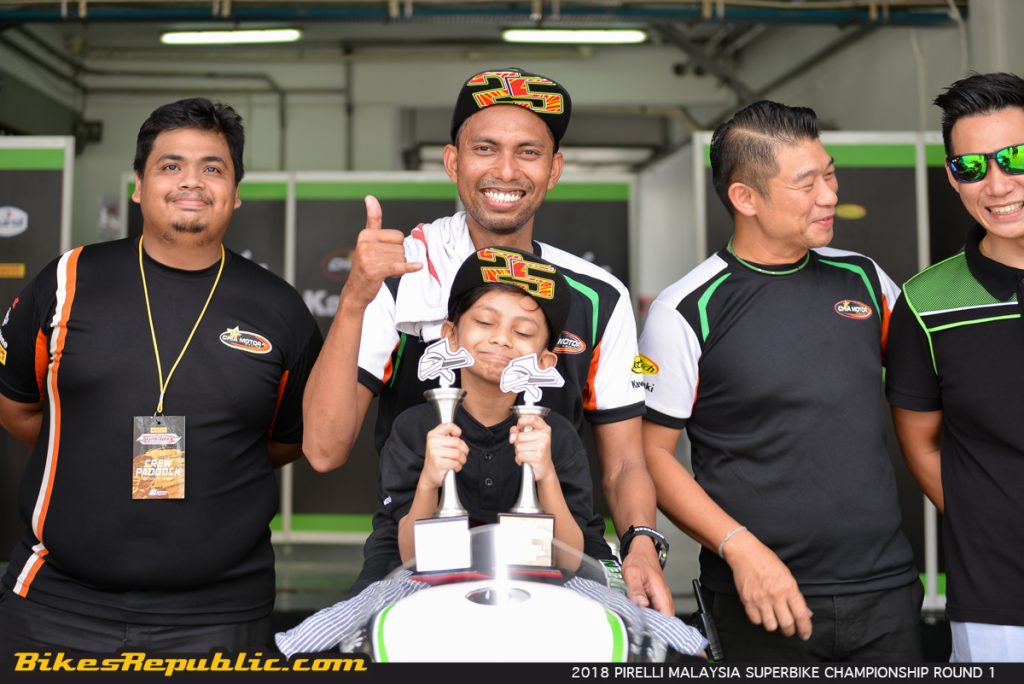 Chia Motor PJ was elated at the results and Azlan stands in second place in the championship as the Malaysia Superbike Championship breaks for Ramadhan and Hari Raya Puasa. 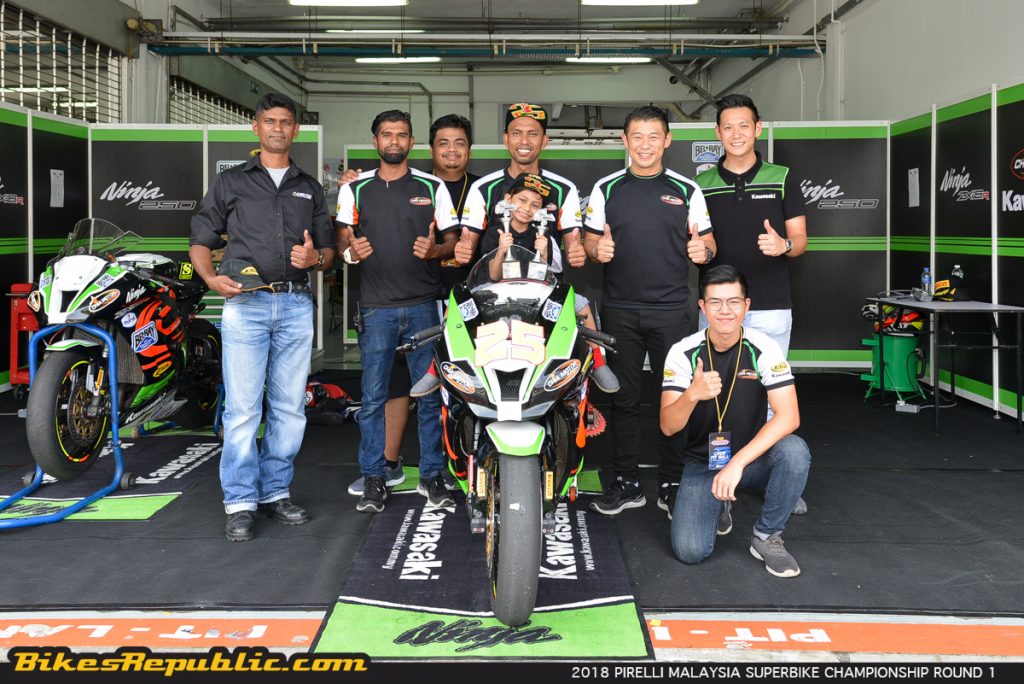