Why is MotoGP so important, anyhow? MotoGP and its 500cc GP forebear are the apex of prototype motorcycle racing, where manufacturers explored different ideas and technologies to trump their competition. In growing markets, MotoGP is a very important outlet for branding in order to sell more bikes on Monday. 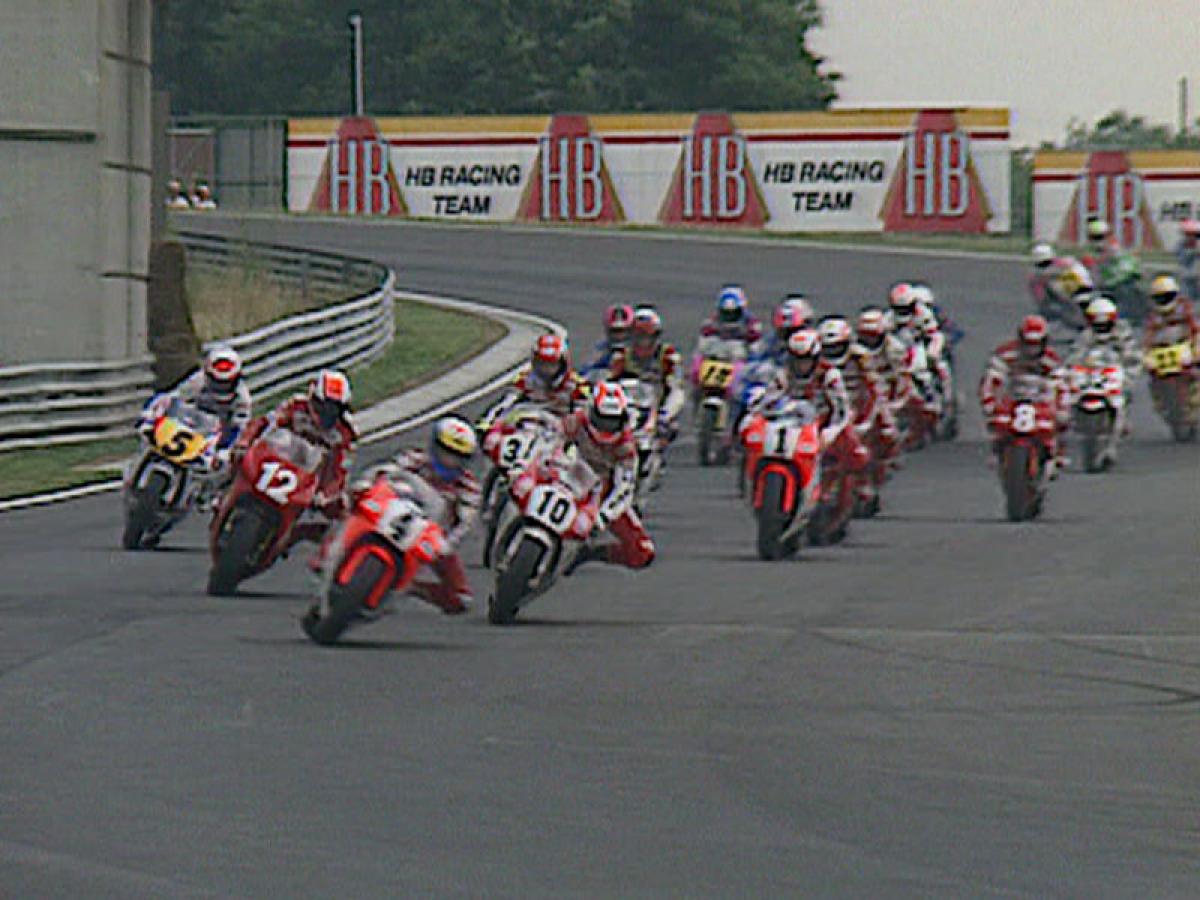 And since MotoGP is the platform where new technologies are tested, some of those will trickle down to consumer bikes sooner or later. In fact, technologies such as ride-by-wire, traction control, fuel injection, suspension, tyres, chassis, bodywork and aerodynamics; right down to lubricants, fuel, coolant, brake fluid, were all derived from lessons learned in MotoGP at one point or another. 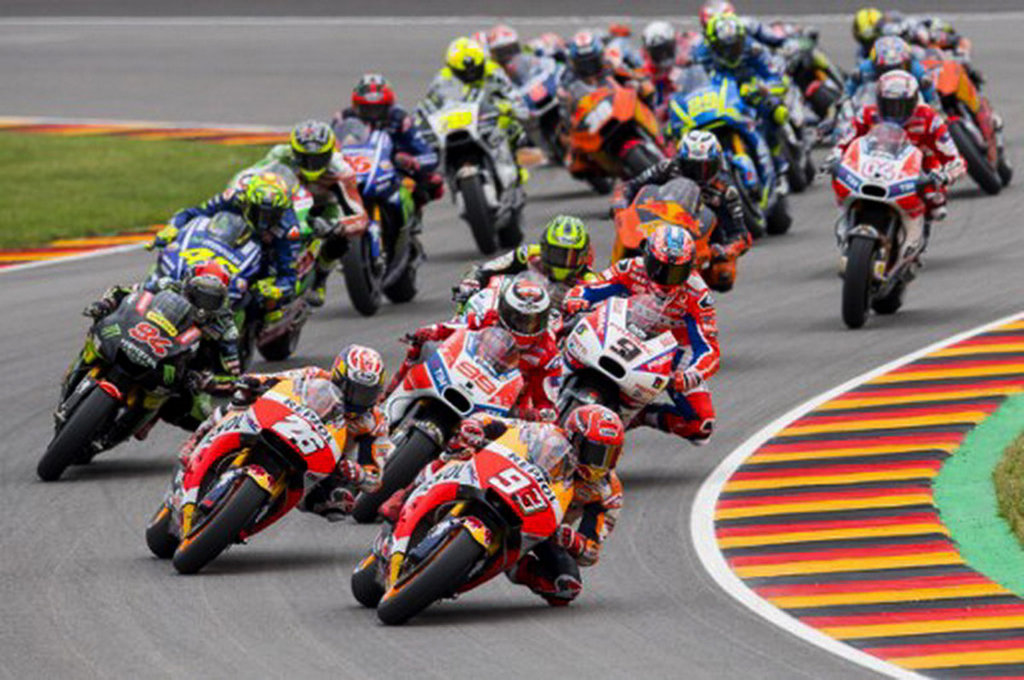 Here are ten GP motorcycles that went against the grain and we regarded as being “different,” so as to speak.

Honda has always been the purveyor of new ideas in GP racing. They had wanted their return to 500cc GP racing with a bang. As the regulations limited machines to a 500cc ceiling, regardless if two-stroke or four-stroke, other manufacturers had chosen the two-stroke route for higher specific power output. Honda, on the other hand, had always preferred four-strokes.

In order to compete toe-to-toe with the two-stroke beasts, Honda devised the NR500 four-stroke V4 with oval pistons, eight valves per cylinder and two conrods per piston; in order to mimic a V8. The engine revved to a manic 20,000 RPM. It didn’t end there as the frame was a monocoque where the lower fairing panels we actually structural mounts for side radiators.

The bike was over-complex and didn’t do well despite valiant efforts by Freddie Spencer. Honda resorted to the two-stroke format in 1984. The oval piston technology went on to power the NR road bike (click here for our article on the Honda NR).

The Ducati Panigale’s frameless technology, called the monocoque, wasn’t the first bike to utilize the technology. The concept had begun years before in 1980 with Kawasaki KR500. The steering head and swingarm pivot structures were welded directly to the aluminium fuel tank which was effectively the bike’s main structure. The idea continued into 1981 before Kawasaki settled on a massive aluminium backbone and conventional fuel tank from 1982.

So, you could probably say that the monocoque idea couldn’t work for GP and MotoGP bikes. A hard lesson learned by Ducati 20-odd years on.

The revered “NSR500” name may have won a great number of races and championships, but it didn’t have an easy start. The first NSR500 in 1984 had its fuel tank mounted under the engine and the exhausts were routed over the top.

Honda wanted the bike to have a lower centre of gravity and that the bike’s handling remained linear as the tank emptied. Factory rider, Freddie Spencer had to wrestle with the bike, although he did win the bike’s second race. He returned to the previous year’s 3-cylinder NS500 for the rest of the 1984 season.

Fans of 500cc GP in the 80’s would surely remember a black bike with the word “Elf” emblazoned on it, between 1984 to 1988. However, it wasn’t the logo that was most attractive, it was because the bikes had no conventional forks for the front end.

Instead, each of the Elf-Hondas had a hub-centre steering swingarm at the front. The project was born to explore the technology in place of hydraulic forks. The most notable iteration was the 1987 Elf-4 which Ron Haslam rode to fourth place in the championship.

The small Noale-based manufacturer, Aprilia, had much success in the 125cc and 250cc two-stroke GPs, it was inevitable that they stepped up to the 500cc GP class in 1994.

Aprilia saw that the qualifying times of 250cc bikes were often faster than those of the 500cc bikes, and the company figured that they could be competitive if they ran a 410cc V-Twin racer, called the RSW2. Being less than 500cc meant that the RSW2 would qualify for a minimum weight of 105kg, compared to 130kg for the 500cc bikes.

It seemed like a great idea, but the RSW2 riders soon found themselves outgunned down the straights by the fierce 500s, before being blocked at corner entries.

Aprilia responded by increasing the capacity to 430cc, then 460cc and finally 498cc but they could never challenge the outright grunt of the four-cylinder 500cc bikes.

Having dropped out of 500cc GP after 2000, Aprilia decided to try again in MotoGP with the advent of four-strokes in 2002.

Honda had gone the V5 route with their RC211V in 2002, while the other manufacturers stayed the course on inline-Fours. Aprilia, being the “rebel” jumped in with a 990cc, inline-Triple which was developed by Cosworth.

Cosworth is a tuning house that’s developed some very powerful and famous engines for the car racing fraternity, including Formula One. Hence, The Aprilia’s engine featured technologies derived from the top class of car racing. They included the then new developments for motorcycles such as ride-by-wire throttle, traction control and pneumatic valves.

The RC211V four-stroke carried on what the NSR500 two-stroke had done earlier: Winning.

When Honda showed off the V5, no one outside the factory had any idea how or if it would work. Honda has never revealed the secrets of the V5 until this very day, including how they overcame crank balance problems.

Apart from the engine, it was the RC211V which started the “mass centralization” revolution that we see on virtually every sportbike nowadays. The first road bike to claim direct lineage to the RC211V was the Honda CBR1000RR, popularly known as the “Rabbit” in Malaysia. Compare the CBR’s frame and how mass is centralized to the RC211V, and you’ll see the picture.

Kenny Roberts’ team held on to the KR3 500cc two-stroke triple for 2002 and scored some astonishing top 10 finishes against the new more powerful 990cc four-strokes. But the dominance of Honda RC211V prompted Roberts to develop his own four-stroke V5 engine for his 2003 bikes called the KR5.

The venture turned out to be a vertical curve and the KR5 didn’t even match the KR3’s results. Roberts turned to a KTM V4 engine to no avail, until they were supplied the real Honda V5 engines in 2006. The KR5 went on to score two podiums, but that was the last year of the 990cc machines, as MotoGP resorted to 800cc machines in 2007.

When four-stroke GP bikes were made their debut in 2002, the regulations were a little more “lenient” compared to how they are now.

In view of this, the Czech manufacturer, Blata, better known as a mini-moto maker, worked on a V6 MotoGP engine for the WCM team. Unfortunately, the project was beset with difficulties and numerous delays. The project was deep-sixed eventually, forcing WCM to compete on old Yamaha-derived 1000cc inline-Four engines.

2005 was also WCM’s last season in the championship.

Casey Stoner may have won the 2007 MotoGP championship on the GP7, but it was the GP17 which truly turned the Italian manufacturer’s fortune around after a decade-long drought.

Ducati had developed “winglets” for the 2016 Desmosedici GP16 to combat front wheel lift (the wheelie) when exiting corners. A “wheelieing” bike loses forward momentum causing the bike’s traction control to cut power, especially at corner exits. But the idea hit a brick wall when other manufacturers protested.

So, Ducati went back to the drawing board and created the “aero body” for the GP17. Andrea Dovizioso guided the GP17 to six race wins and was the title contender right down to the last race of the season.