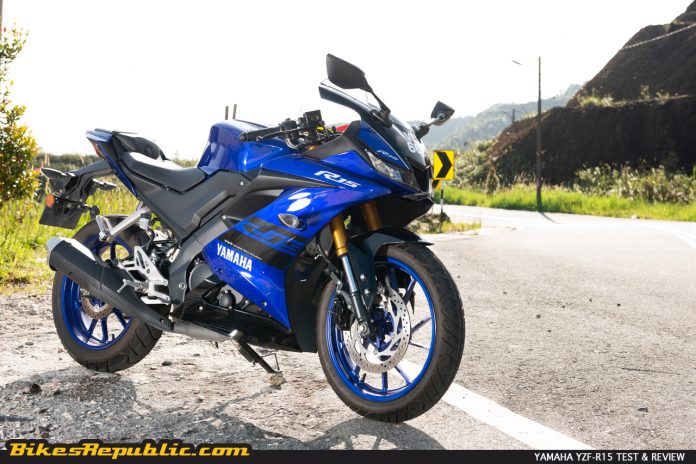 The cliché “Good things come in small packages” certainly applies to motorcycles too. We found it true after riding this Yamaha YZF-R15 for one week. 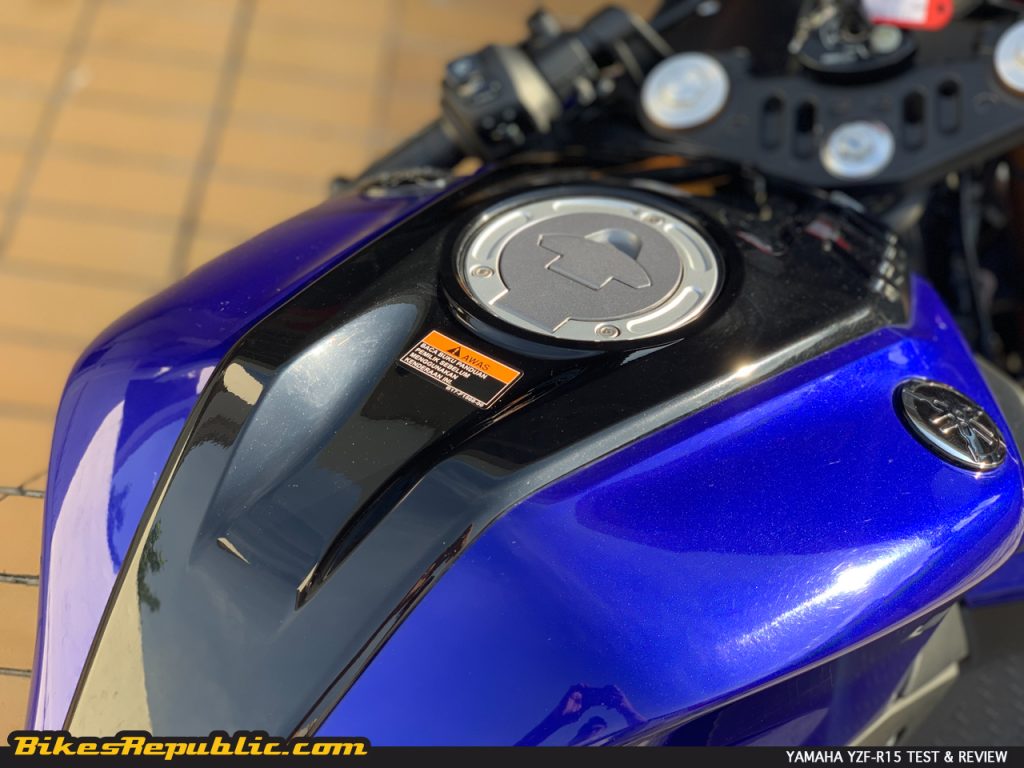 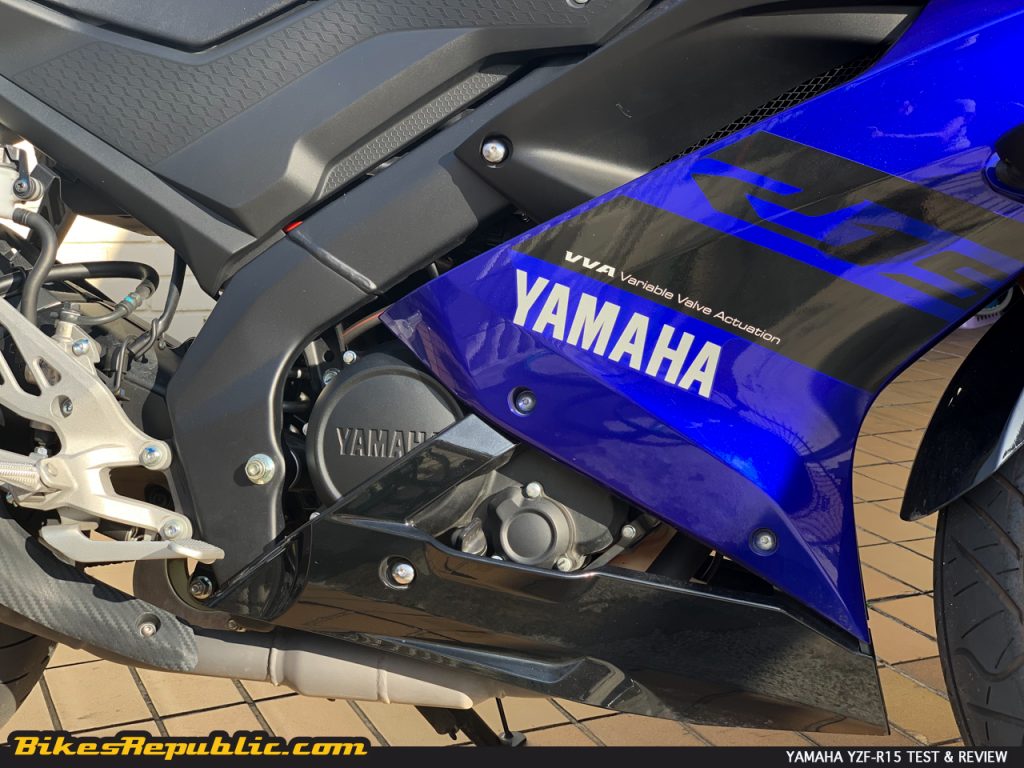 The engine’s power is fed through an Assist and Slip (A&S) clutch on its way to the 6-speed gearbox.

Its suspension consists of gold-coloured upside-down forks up front and a monoshock at the back. The forks and monoshock are non-adjustable. However, we noted that the shock acts through a set of rising rate linkages instead of being mounted directly to the swingarm. The frame is an updated Deltabox.

It features LED lighting and turn signals. The twin headlights flank a large (fake) air scoop. The windshield is as large as the R25’s. Apart from that, the instrument display is fully LCD. 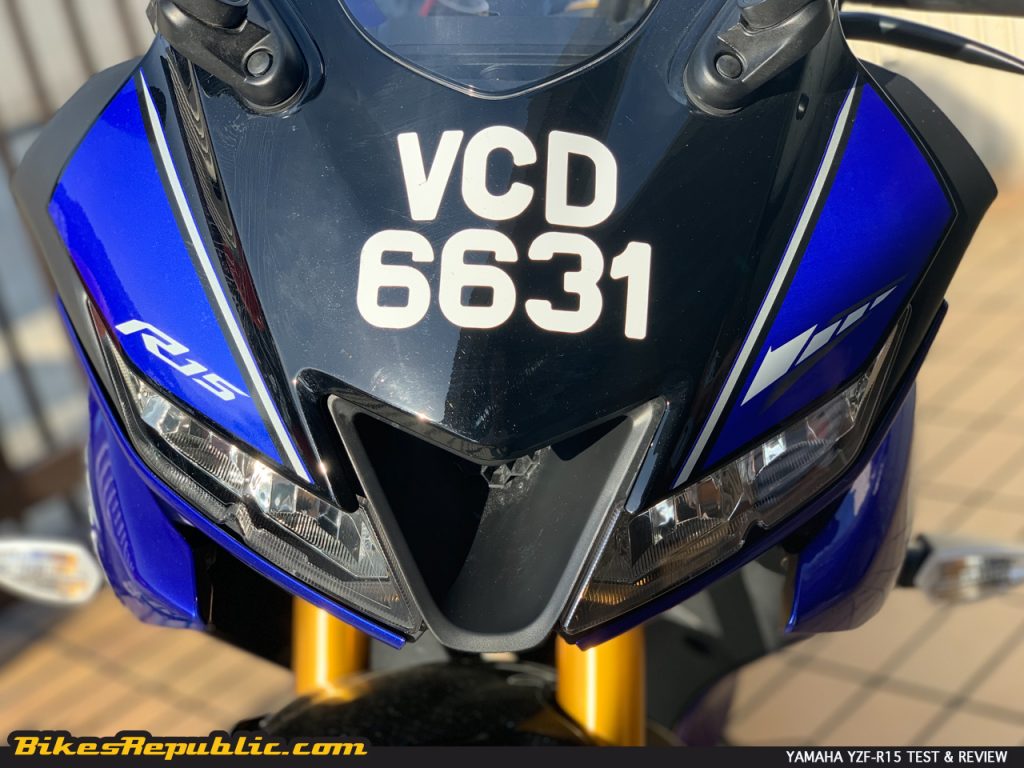 The R15 felt front heavy at first, but it’s because we didn’t lower our upper body, causing us to push down onto the handlebars. During that moment, it felt like a steering damper that’s adjusted too tight. However, it disappeared as soon as we lowered our torso and relaxed our arms. Now the bike was very, very agile.

However, the bike became very stable at speeds above 90 km/h on the highway. It didn’t weave about even when hit by strong sidewinds. Credit goes to the well-designed aerodynamics. 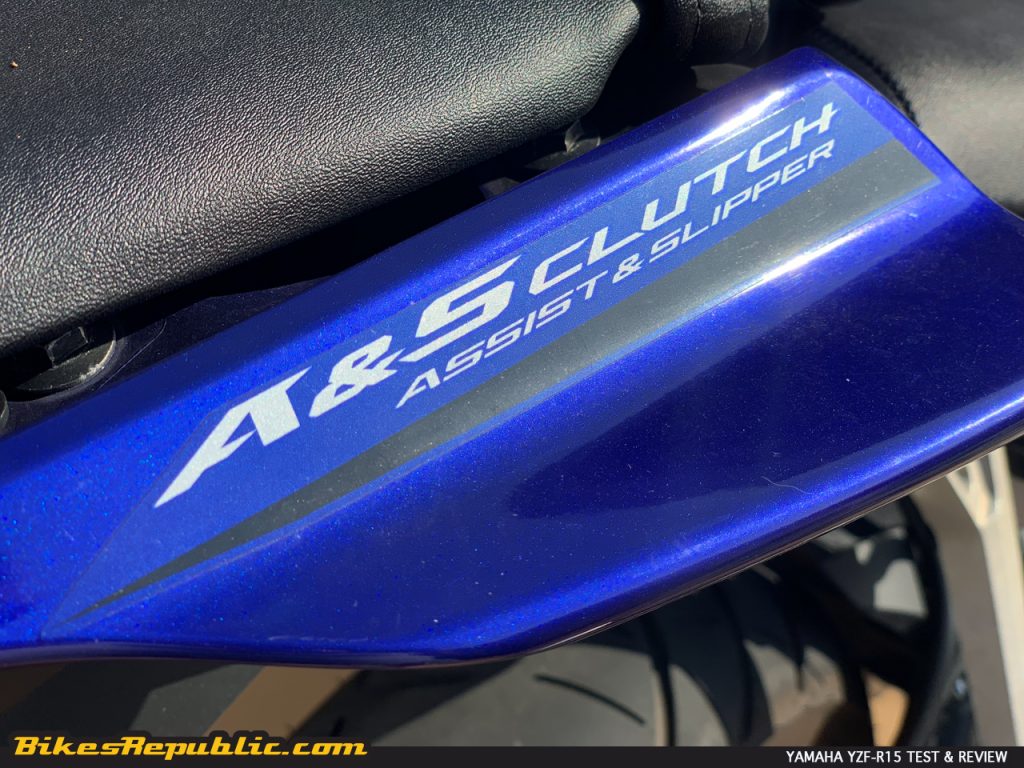 The engine revved a little slowly under 5,000 RPM. You need to keep the engine RPM up to 2,000 RPM before dumping the clutch to charge off the line. However, the bike charges ahead when the VVA activates at 7,500 RPM (there’s an indicator in the instrument cluster). The engine smoothens out from 8,000 RPM, too.

The real fun of the R15 is in the corners since it’s lightweight, besides having a slipper clutch and sporty riding position.

The slipper clutch means you carry much more rolling speed into corners, even when you go off the throttle. Conversely, having too much back torque will slow you down mid-corner. On the R15, you charge into corners a gear higher than you normally do.

The lower handlebars allow you to hang off comfortably when you charge through corners. Just move your body to the inside and let the fuel tank support your out upper arm.

In fact, we kept flying through corners from 30 to 40 km/h faster than we would normally do. The R15 inspires lots of confidence when you chuck the bike in due to its low weight and quick-turning character. It holds the chosen line while you’re able to modify your line even while you’re sparking the footpegs.

Helping to realize this kind of riding is the suspension. We’ve tested all of Yamaha’s road bikes (apart from the R1 and R6) but it’s the R15’s suspension that’s the best calibrated. You may take big hits while riding slowly, because the bike is light, but the suspension becomes very well damped the faster you go. There’s no bobbing or wallowing at speed. 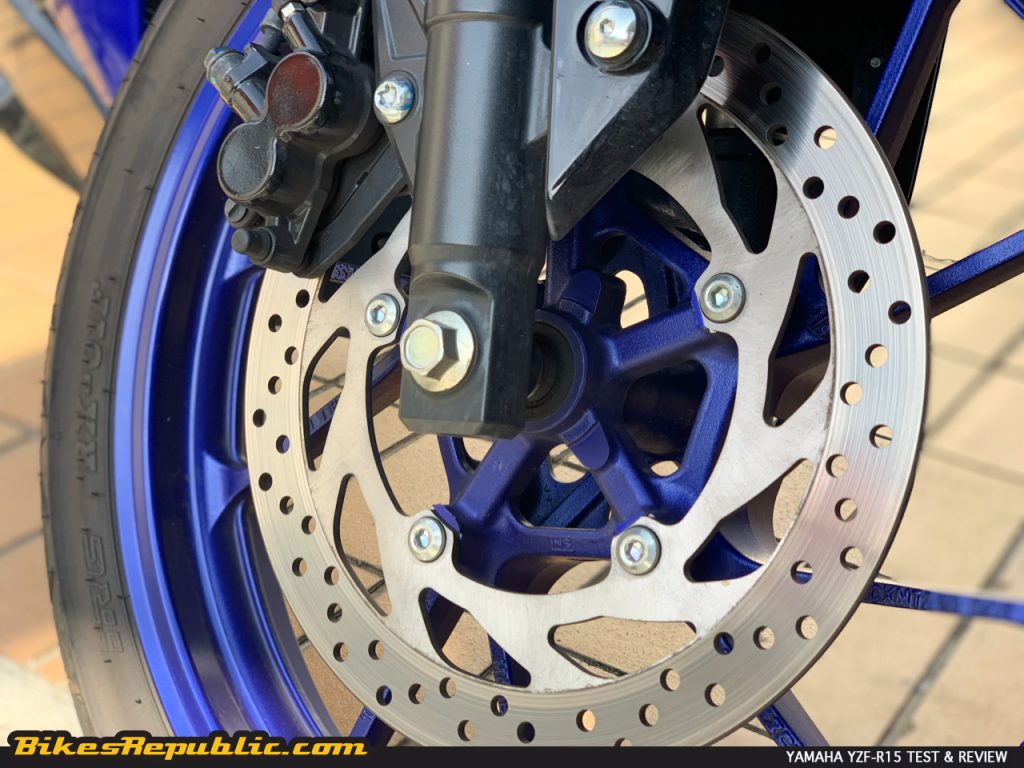 Another measure of the suspension was when the bike ran through wet patches and standing water while leaning inside corners. The stock tyres felt a little slippery on other bikes, but they felt perfect on the R15. We could only imagine how well the bike will perform on better tyres.

Yes, we know naysayers say the Yamaha YZF-R15’s riding position is uncomfortable, but that’s just because you need to know the correct technique. We’re not criticizing, just that it’s something riders have to learn. 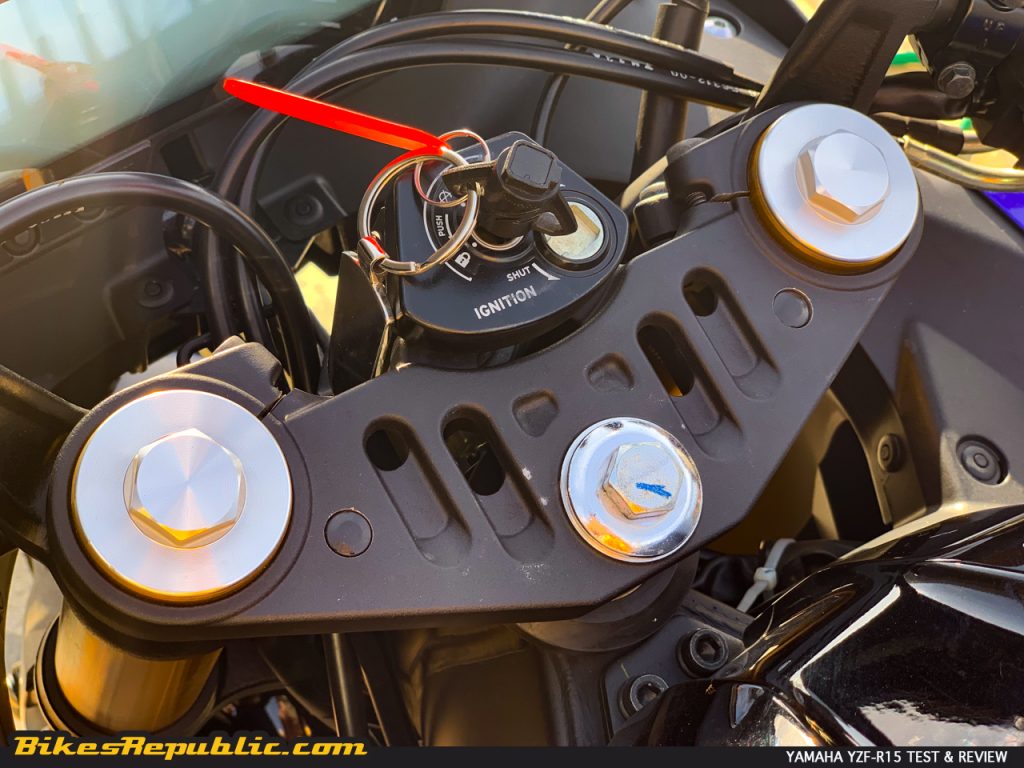 And no, there wasn’t any stock Y15ZR that could keep up on the straight line and in the corners.

Finally, the engine was remarkably fuel efficient despite us riding at 110 to 130 km/h all the time, after charging full throttle from idle. We averaged 310 km per 11 litres, and we only refueled the bike once in the one week! The computer showed 2.6l/100km, which equates to 38.5 km/l.

By the way, we tried really, really hard to find something negative but found none… 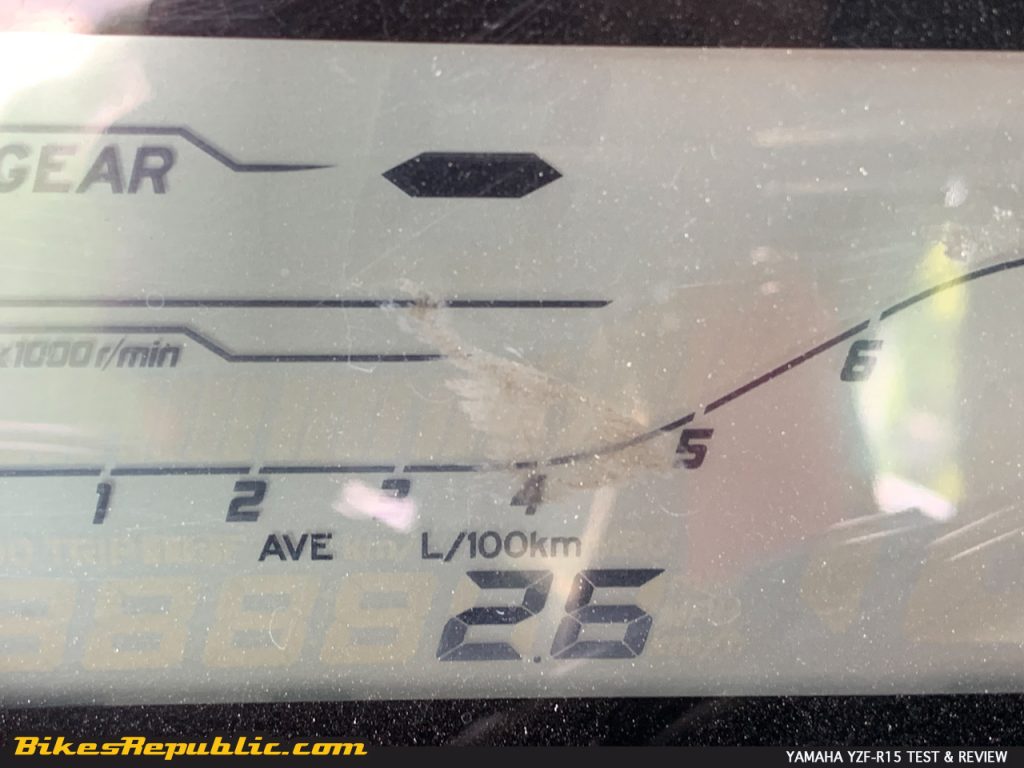 The Yamaha YZF-R15 really surprised us to no end, because it demonstrated just how capable it is. This is definitely the best 150cc sportbike in the market.

It is priced from RM 11,988 (basic selling price), and offered in Blue, Yellow and Black. 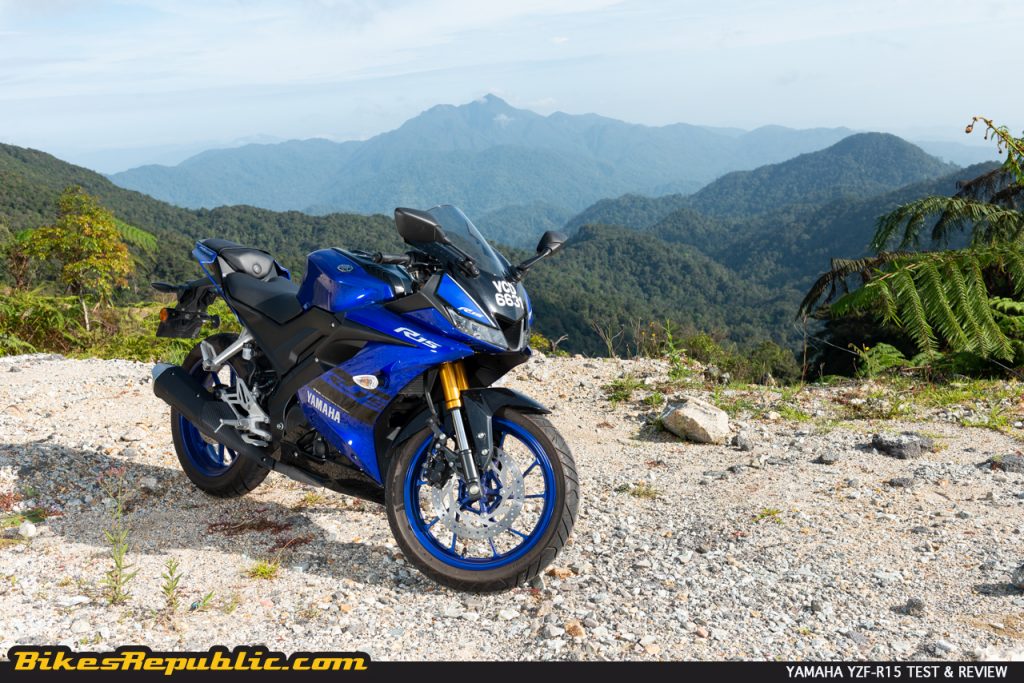