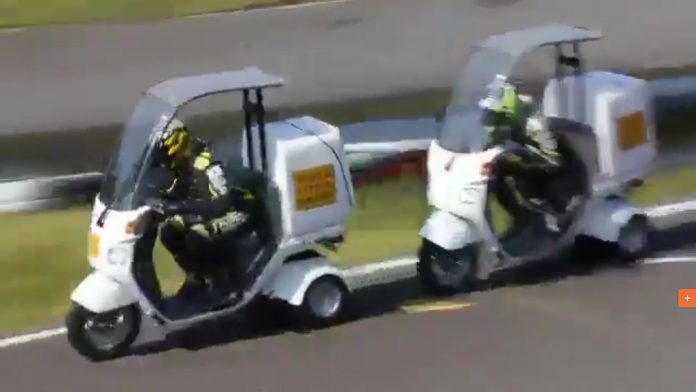 Japanese pizza delivery scooter racing is actually a thing in where else but Japan where riders race against each other on three-wheeled scooters that Japanese use to deliver pizzas.

In the video, you can see two Honda Gyros go head to head with riders in full racing gears and a lot of knee dragging action.

Small capacity scooters like the Honda Gyro are used in Japan to delivers pizzas due to their great mileage and tax deducting properties.

Yes, you read that right. There is actually a motorsport in Japan (where else, of course) that takes the idea of fast pizza pie delivery into a super competitive, adrenaline-filled, petrol-powered extravaganza (not like the Pizza Hut pie). This is the Japanese Pizza Delivery Scooter Racing.

Here in Malaysia, the transport of choice to deliver your freshly baked pizzas to your doorsteps is the mighty moped or ‘kapcai’, small capacity motorcycles that can zoom in and out of traffic to get that piping hot pizza to you in 30 minutes or less. In other countries, they’ve adopted the humble scooter for similar reasons.

In Japan, they prefer super small 50cc three-wheelers like the Honda Gyro, a humble tilting scooter that not only offers great mileage (around 2.8 litres/100km) but also great levels of entertainment where racers dressed like how they would in superbike races but getting their knees down on this leaning three-wheelers.

In the video below posted on Twitter by @c0rnbread, two racers going at it in a mini circuit probably owned or sponsored by Dunlop showed a lot of knee down goodness. PURE GOLD. Come to think of it, this does have the potential to breed a lot of good riders considering the fact that the pizza delivery guys literally have to fight the clock while swerving in and out of traffic.

Could the next Rossi be someone who delivers pizza pies for a living? Not much else can be said about this super entertaining spectacle except for “Only in Japan”.