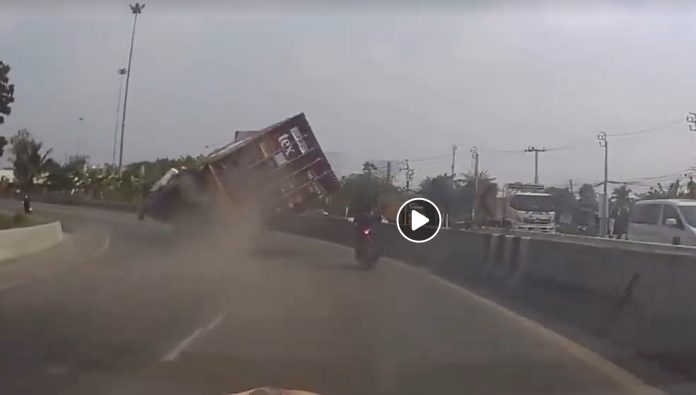 This happened in Thailand and watch as the motorcyclist brakes just in time for the truck’s container to tip over!=

The motorcyclist in the video was alert of his surrounds hence he applied the brakes as soon as he saw the truck going off-balance. He missed it with mere metres to go. Additionally, he looked around for other traffic and rode off to stop further down the road, instead of sitting pretty behind it and risk being rear-ended. Yes, he did all these despite the adrenaline pulsing through his veins.

We have often seen riders carrying on with their daydreams, possibly of dating Neelofah or Scarlet Johansson, and being completely oblivious of their surroundings. That’s how the suddenly find themselves right in the middle of the overtaking lane, being tailgated by a heavy vehicle.

Being inattentive also leads to prolonged reaction times. Needless to say, the outcome is usually not pretty.

So, be attentive and smart like this rider. It could be a matter of life or being pancaked into the road.