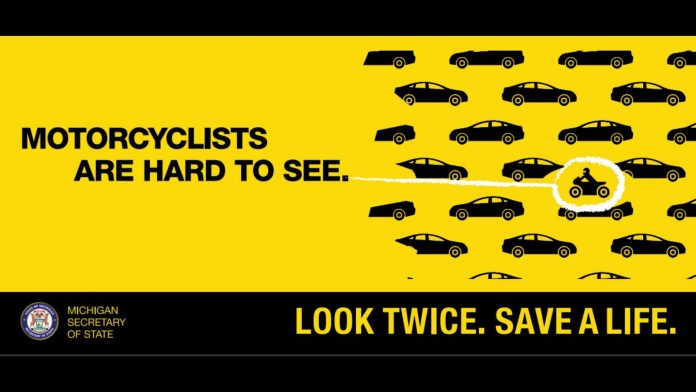 The state of Michigan, USA is teaching motorists how to spot motorcycles in traffic.

How many times have we been cut off (colloquial: pangkah) by other vehicles on the road? In a flash of anger, we think these motorists are either blind or doing it on purpose. Truth is, no one wants any trouble. It’s usually because motorcycles are difficult to spot given the bike’s small cross section coupled with the abundance of blind spots in other vehicles.

A small cross section makes it hard to estimate the bike’s closing speed. A driver who glanced once at bigger vehicles can pretty much process its closing speed but not a motorcycle’s.

That’s why the campaign is called “Look Twice. Save a Life.”

The campaign features videos being circulated at gas stations, billboards and “tip cards” throughout the state. Michigan is also one of only 17 states in the US which has anti-distraction laws.

We wonder why such a campaign can’t be carried out here in Malaysia. Yes, there’s a public service announcement ad about the perils of using the phone while riding but there’s no concerted approach in teaching motorists on looking out for motorcycles.

Instead, the Transport Ministry, Public Works Department and MIROS are intent on listening to advice from a group who has no experience about motorcycles but has plenty of self-vested interests. As a result, motorcyclists may be punished instead by being relegated to the left lane.

Heck, even the motorcycle lanes along the Federal Highway have not been completed.