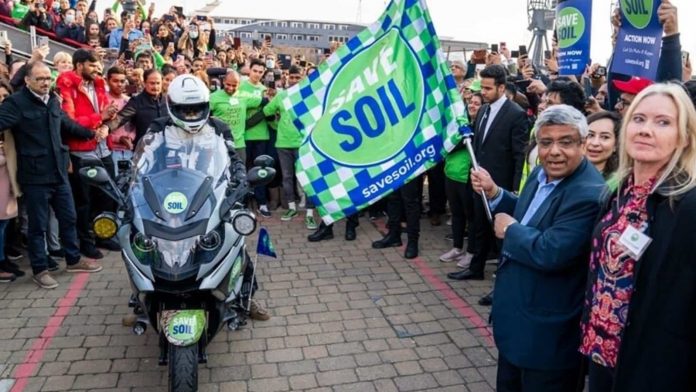 Famous environmentalist, Sadhguru has set off on a 30,000-kilometre journey from London to India to raise awareness on his Save Soil campaign.

The campaign will see him ride his BMW K 1600 GT motorcycle across Europe and the Middle East en route to India just in time for the Summer Solstice on June 21, 2022.

The first course of the week will witness the ‘yogic guru’ riding through Amsterdam, Berlin and Prague before aiming to arrive in New Delhi in 75 days in honour of India’s 75th year of independence.

According to Sadhguru, soil depletion is a worrying rate, and he hopes that the campaign will have a significant impact on raising awareness.

“It’s extremely important that we act now. I’ve been talking about this for over 24 years, but solution can only happen when there is positive policy in every nation.

“It is still snowing in many parts of Europe and we’ll be going through that on a two-wheeler,” he said.

Although riding has been his passion, Sadhguru admits that he wants to use it to bring a positive change to the world.

The 64-year-old previously toured all of India on a Yamaha RD 350 and was also spotted cruising on a customised Honda VFR X for his ‘Save Cauvery River’ campaign.

“At this age, it’s not a joy ride. So why am I doing this? Because over 300,000 farmers have committed suicide in the last 20 years. Not just in India, across the world this is happening..one of the main concerns is soil depletion,” he added.

Sadhguru’s campaign aims at inspiring at least 3.5 billion from the world’s population to support long-term government policies to revitalise soil and reverse depletion.