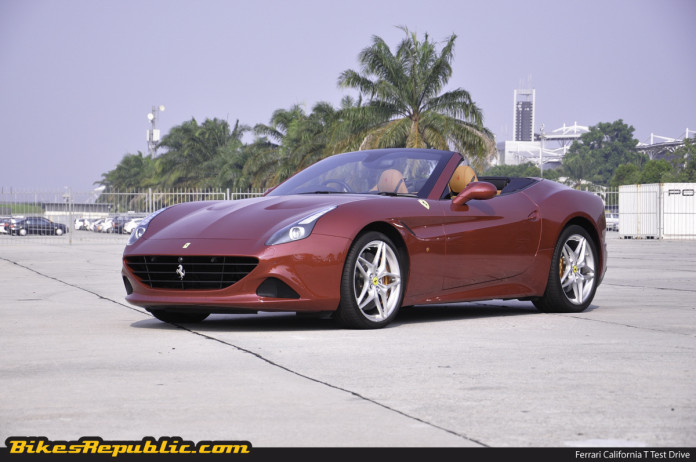 Maranello’s famed prancing horse badge is perhaps one of the most celebrated sports car marques in history. Though fames for making some of the planet’s most coveted race-bred performance sports cars, Ferrari has indeed produced some of the greatest grand touring cars of all time too, with the brand’s new California T fast becoming one of the latter in recent times. 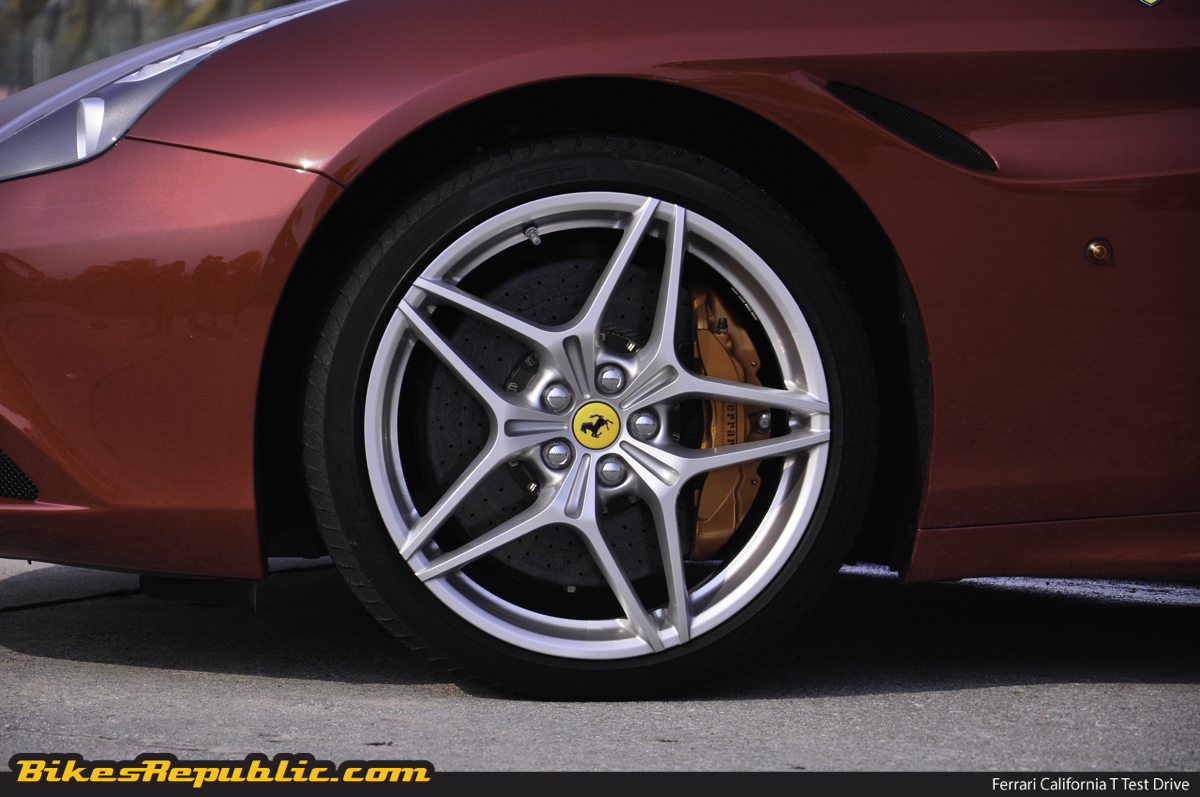 Introduced back in 2014 at the Geneva Motor Show, the California T became the first turbocharged roadcar conceived by Ferrari since its iconic F40 of the 1980s. The ‘T’ in California T symbolises that fact, with Ferrari also granted it with a host of enhancements over the naturally aspirated California model it succeeds. 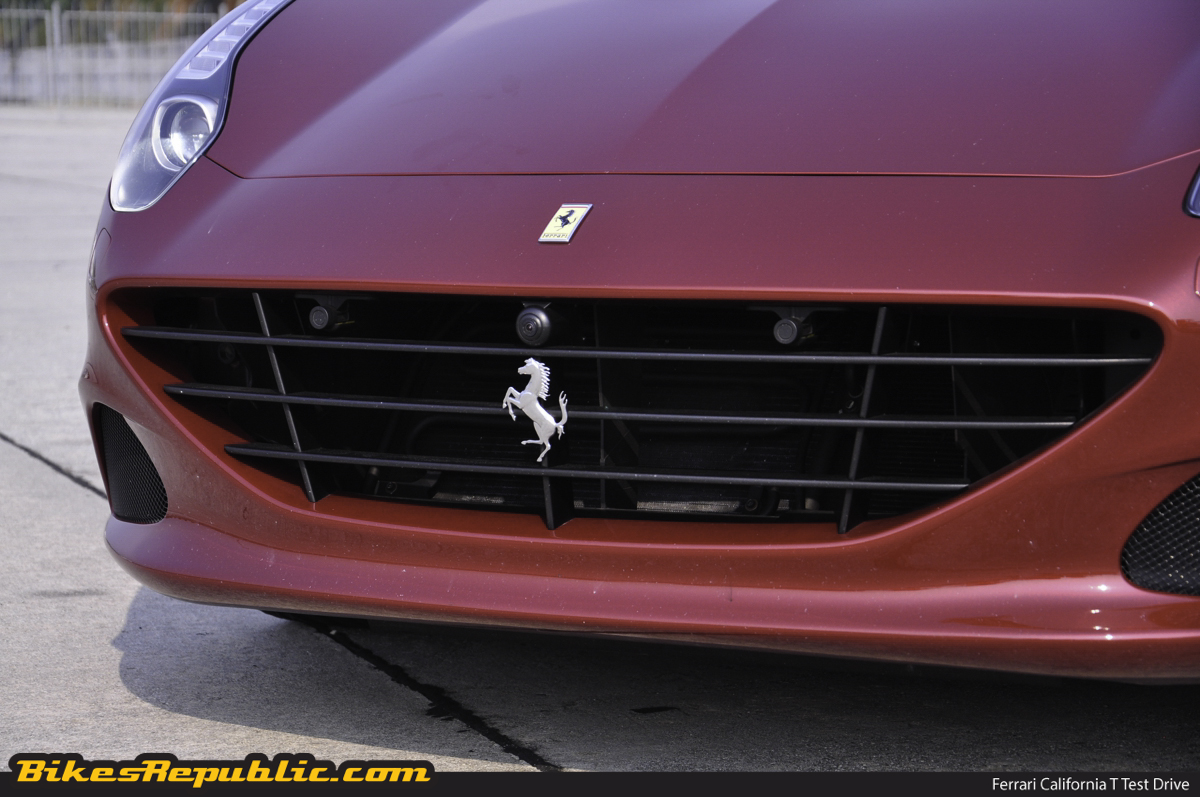 Unlike the mid-engined 458 Italia and manic F12berlinetta, the California model was conceived as a 2+2 grand touring cabriolet for the jet-set that offered a milder performance level as oppose to Ferrari’s other race-bred creations. Fuelling that fact further is the California’s offer of a retractable hard-top (RHT) roof, which allows you to enjoy that coveted wind-in-your-hair driving thrills, with the system taking just 14 seconds to fully retract and deploy. In other words, if ever you wanted a stylish Ferrari that wasn’t seriously focused on conquering the track, you’d want the California. 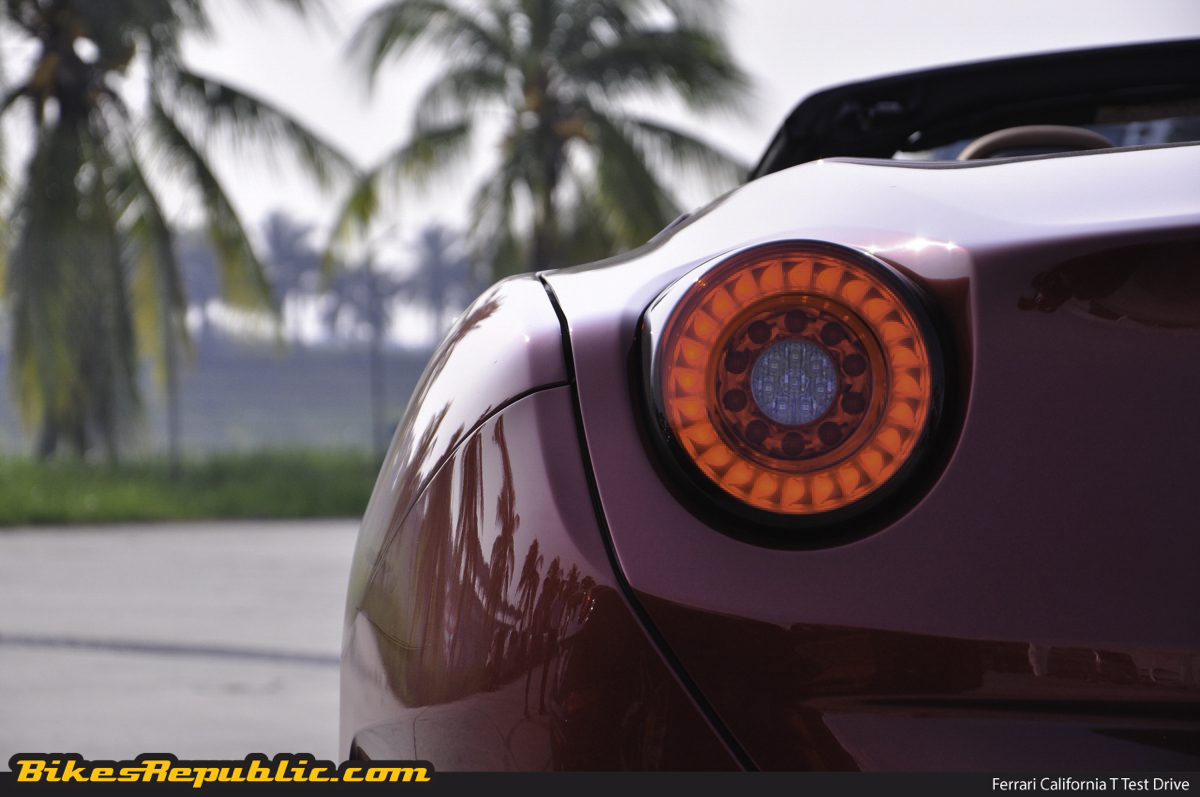 Whilst the original California that debut in 2008 did indeed win hearts in terms of styling, many of its intended buyers perceived it to be ‘too soft’, resulting in it being dismissed rather quickly in favour of rivals such as the Bentley Continental GTC and the pricier Aston Martin DBS Volante. Realizing, this Ferrari promptly gave the California an extensive mid-life makeover, resulting in the California T.

Whilst the exterior styling did not win as many hearts as its predecessor did, it is still quite a looker in our eyes. We love the traditional yet sleek styling penned by Pininfarina,  and it still looks fit for a cruise down the scenic coastlines roads of Italy or Southern France. 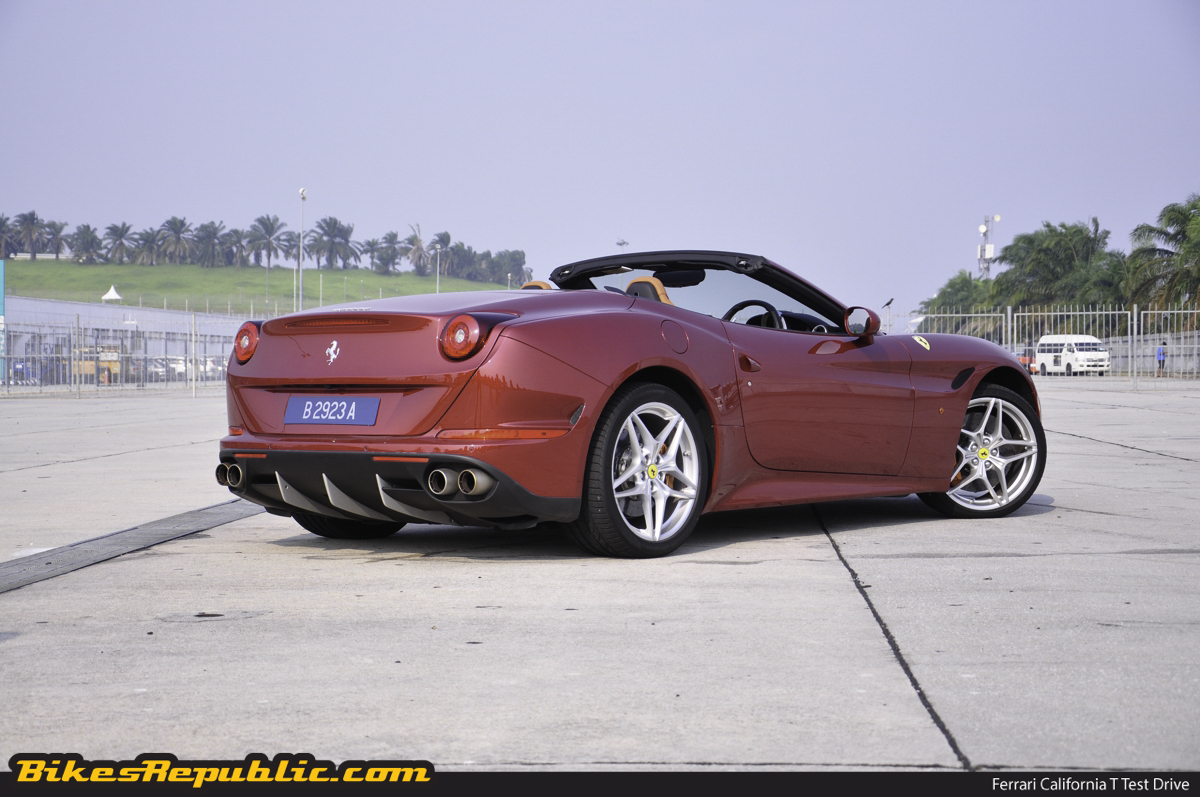 Climb aboard and things inside the cabin look just as stylish with a lot of flair as the exterior. Depending on how you’d like to spec it, you can have the California T’s cabin lined with a vast selection of bright-coloured and plush leather trims just like the red-coloured test unit featured here, or you could opt for a more darker and racier outlooks with aluminium, Alcantara and carbon fibre trim options. 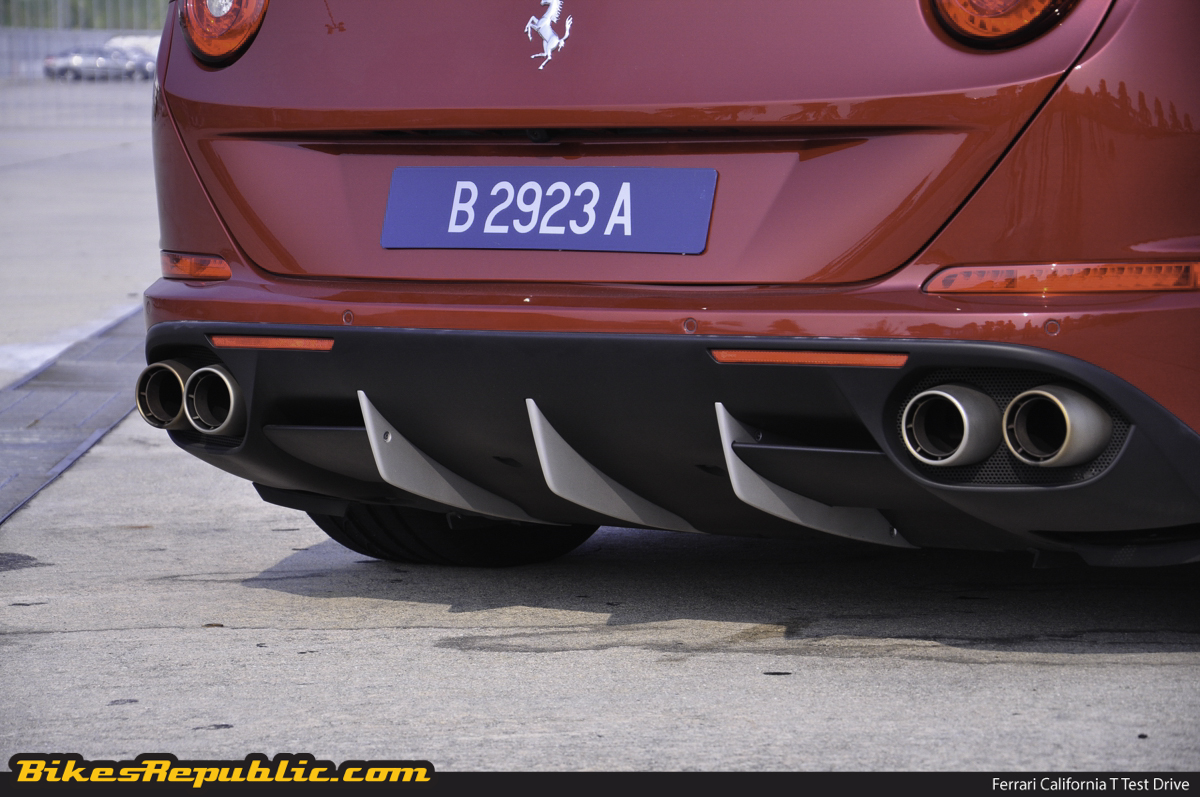 Either way, the feeling is just about the same, and that being the note of having something special yet purposeful thanks to things like the large central rev-counter dominating the instrument panel, and the absence of a traditional gear level in favour of buttons and paddle-shifter actions. What really felt sublime was having that mild racy traits combined with the plushness of the premium cow hide covering the dash, steering wheel and seats. 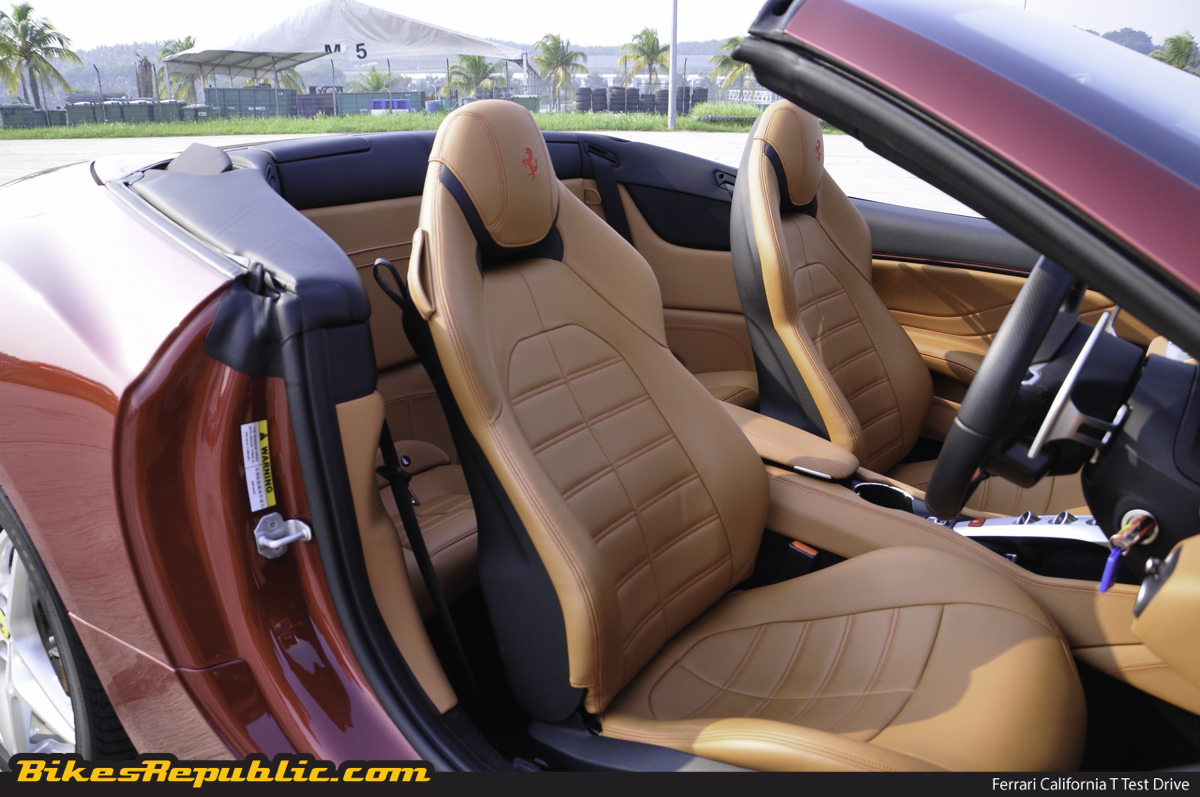 Of course, this being a Ferrari, the real fun begins the moment you hit the engine start button to fire up this California T’s front-mid-mounted heart. Underneath the stylishly crafted Italian metal sits a brand new 3.9-litre twin-turbocharged V8 engine christened as the F154 by Ferrari. It replaces the previous California’s naturally-aspirated 4.3-litre V8, offering 552hp at 7,500rpm and a whopping 755Nm of torque at 4,750rpm when its two turbochargers are at spooling at full.

Ferrari opted to go down the turbocharged route as a means of adapting to strict emissions restrictions in Europe, with the trend these days favouring lower displacement with force induction. Though it has shrunk in size slightly, the new mill is indeed more powerful than the one replaces, but more importantly, it is much greener as well thanks to the presence of automatic idling stop-start and an intelligent transmission as well. 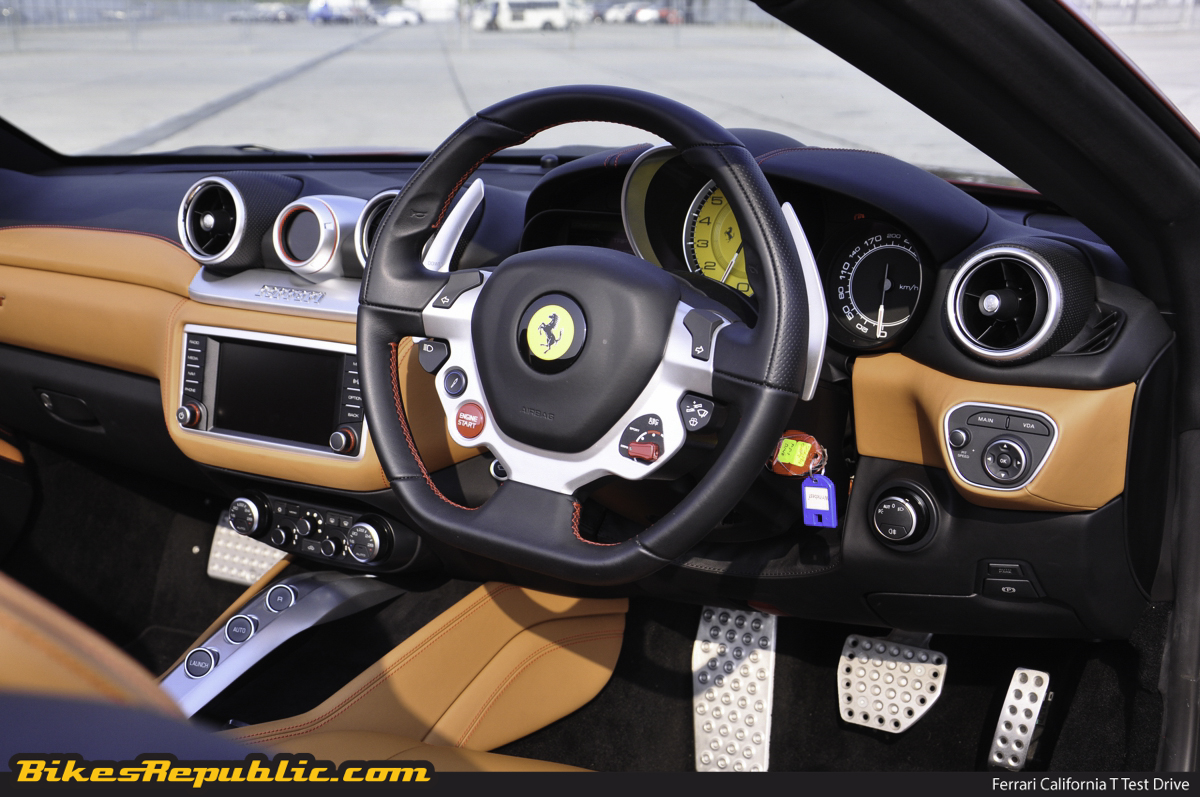 On the move, what surprised us was the way this mill acted, having almost no noticeable lag with a very precise and direct delivery much akin to a naturally aspirated mill. The dead giveaway of its forced-induction nature only comes when you let off the throttle at the higher rev-band, where the unmistakable wastegate whistle and hiss comes into fruition, albeit at very mild volume level indeed. Ferrari have worked hard at making this mill not feel and sound like a turbocharged one, and the result is pretty impressive to say the least.

All power generated my the twin-turbo V8 is sent to the rear wheels via a revised version of Ferrari’s seven-speed dual-clutch transmission (DCT), which is paired with Ferrari’s CST and F1 TRAC stability and traction control suites. The powertrain grants the California T with an impressive century sprint time of 3.6 seconds, whilst the claimed top speed stands at 315km/h. 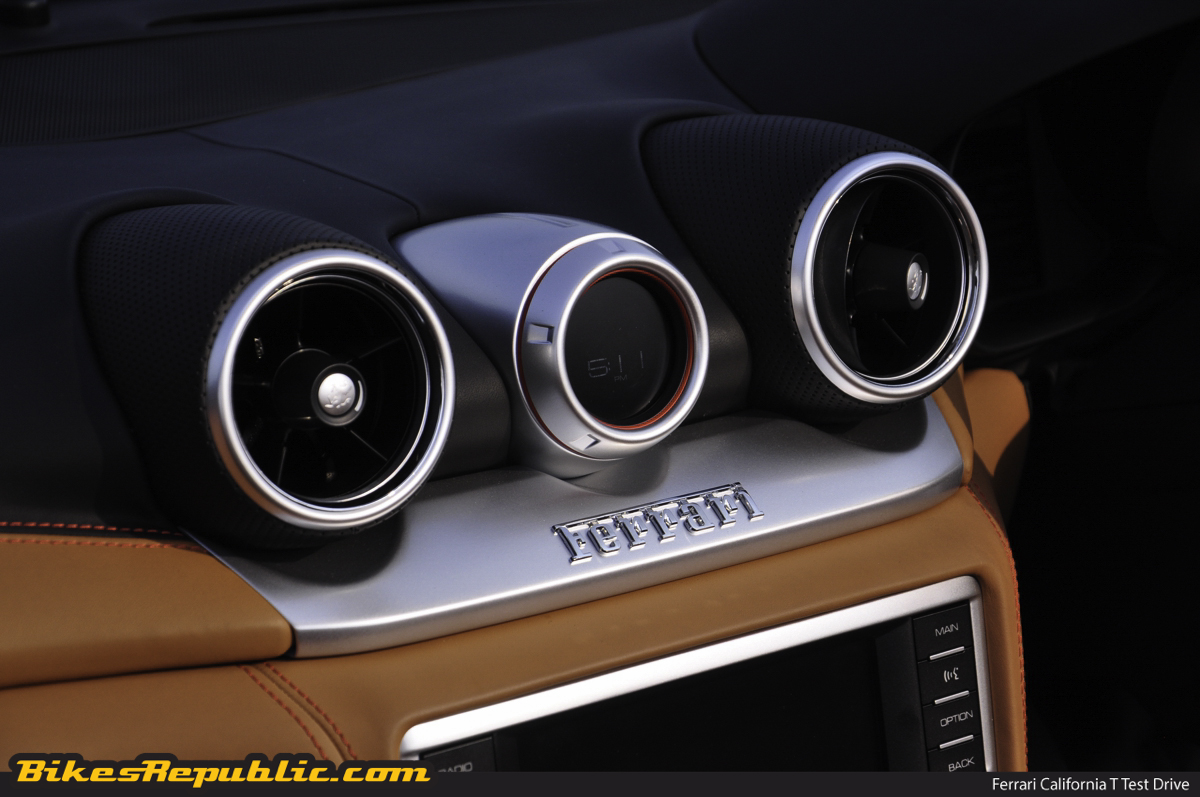 What we loved here besides the engine was the smooth action of the 7-speed DCT both at speeds and in an urban cruise. What was an event on its own as well as the way this transmission automatically downshifts whilst under braking for corners and what not, with the on-board electronics blipping the throttle and engaging the gears precisely in just milliseconds. This is perhaps a testament to the prancing horse badge’s intimate knowledge garnered from a century of racing.

What complemented this in full was the California T’s highly engaging driving dynamics and chassis. Amongst the many electronic wizardries primed on board the California T, the most crucial contributors to its dynamic feel are the Manettino driving mode selector tailored for Ferrari by Magnetti Marelli, followed by the Magnaride adaptive suspension suite as well. 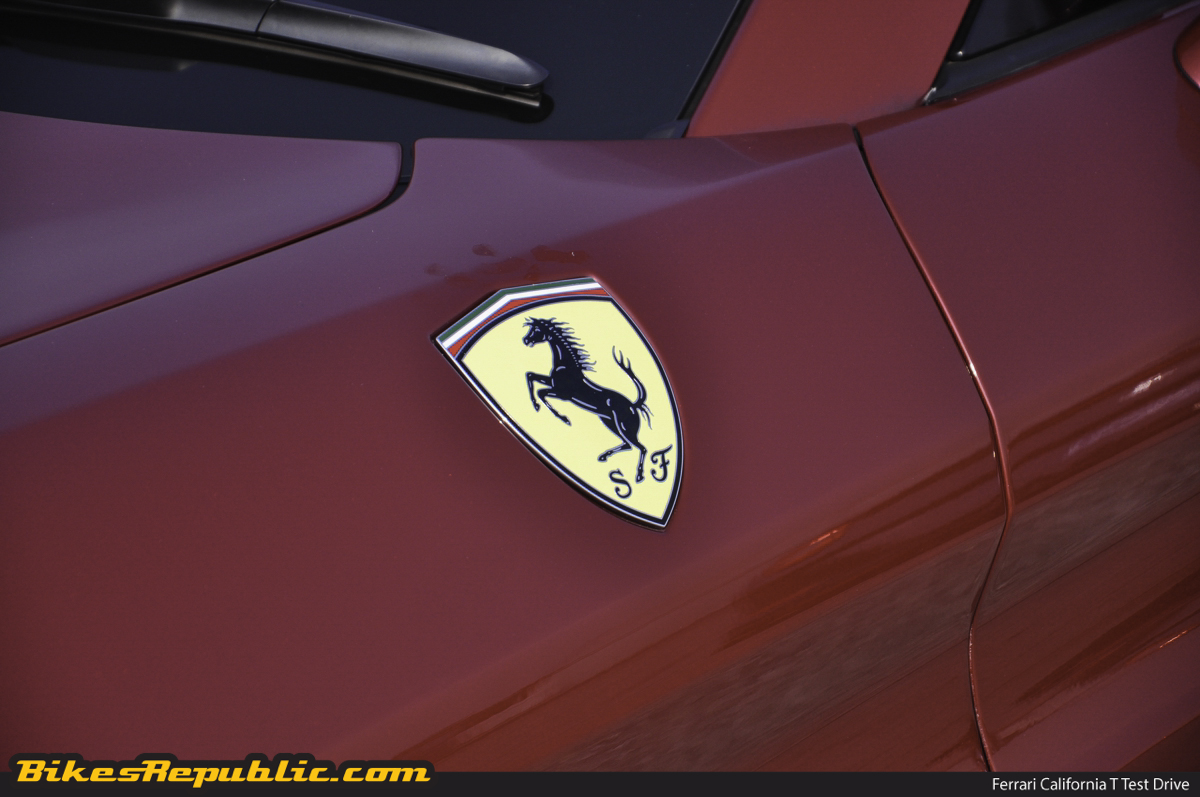 With the ‘Comfort’ mode engaged, the California T felt rather docile and compliant, even when charting down a slightly bumpy and twisty set of roads as we did in our test drive in and around the roads surrounding roads of the Sepang International Circuit. Also altered here are the DCT’s shift points, followed by the reduced throttle sensitivity, and the lightened steering weight.

With this mode, the magnetic adaptive suspension works overtime in granting the most comfortable ride possible, with the system actively adjusting the suspension travel rate and dampers in milliseconds. This is the mode you want engaged when enjoying a drive down a scenic coastal road.

However, things quickly change once you flick the Manettino into ‘Sport’ mode. Here, the throttle sensitivity is sharpened, the DCT’s shift points re-optimised, followed by the increased weight in the steering wheel.

This mode also sees the active suspension and dampers firming itself up, where it almost eliminates the noticeable body roll in ‘Comfort’ mode, offering a much stiffer ride as well. In this mode, the California T is fully re-optimised for you to conquer a stretch of twisty and windy B-roads, inspiring lots of driving confidence here as well. 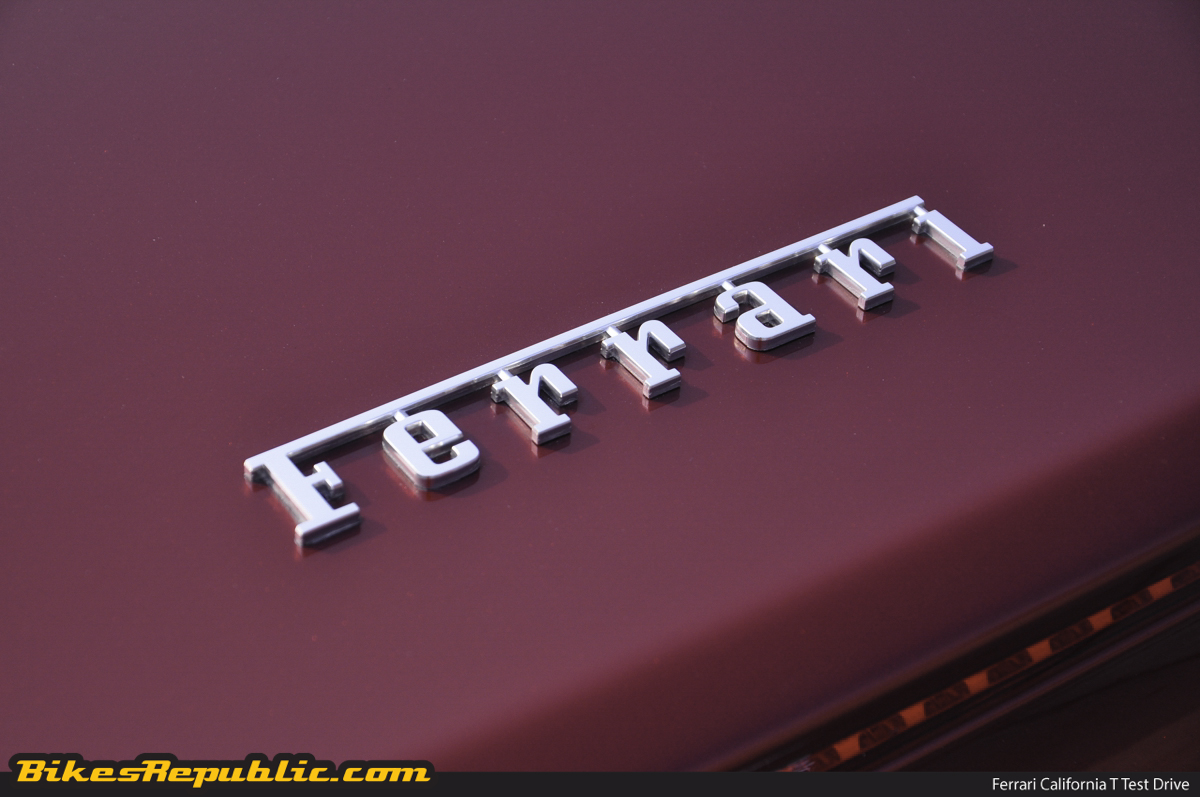 What deserved praising here as well were the large and powerful CCM3 carbon ceramic brake (CCB) rotors with equally large brake pads hiding behind the stylish alloy wheels at all four corners. They do need warming up initially, but once they’re at optimal operating temperatures, the bite and stopping power is just as phenomenal as the way it gets up to speed, not to mention the highly responsive ABS suite as well. This is one reassuring bit of kit indeed, especially in a car as potent as the Ferrari California T.

Our only gripe with the handling and driving dynamics was, naturally, the artificial feel of the electric steering system. Whilst it takes the fun out of driving to a certain extent, especially in a high performance car as such, one easily forgives it simply because it makes driving the Ferrari California T much easier when one isn’t in the right mood for an adrenaline rush.

Overall, the Ferrari California T does what it was designed to do brilliantly, and that being the offer of a luxurious and stylish open-top grand tourer with an exceptional level of performance for the road.

If you really wanted a proper rush and a test of your driving skills, then you are better off with the mid-engined 458 Italia or its new and turbocharged 488 GTB successor. However, you wanted a stylish grand tourer that is still capable of keeping up with said mid-engined sports coupes, the Ferrari California T sate this need brilliantly. 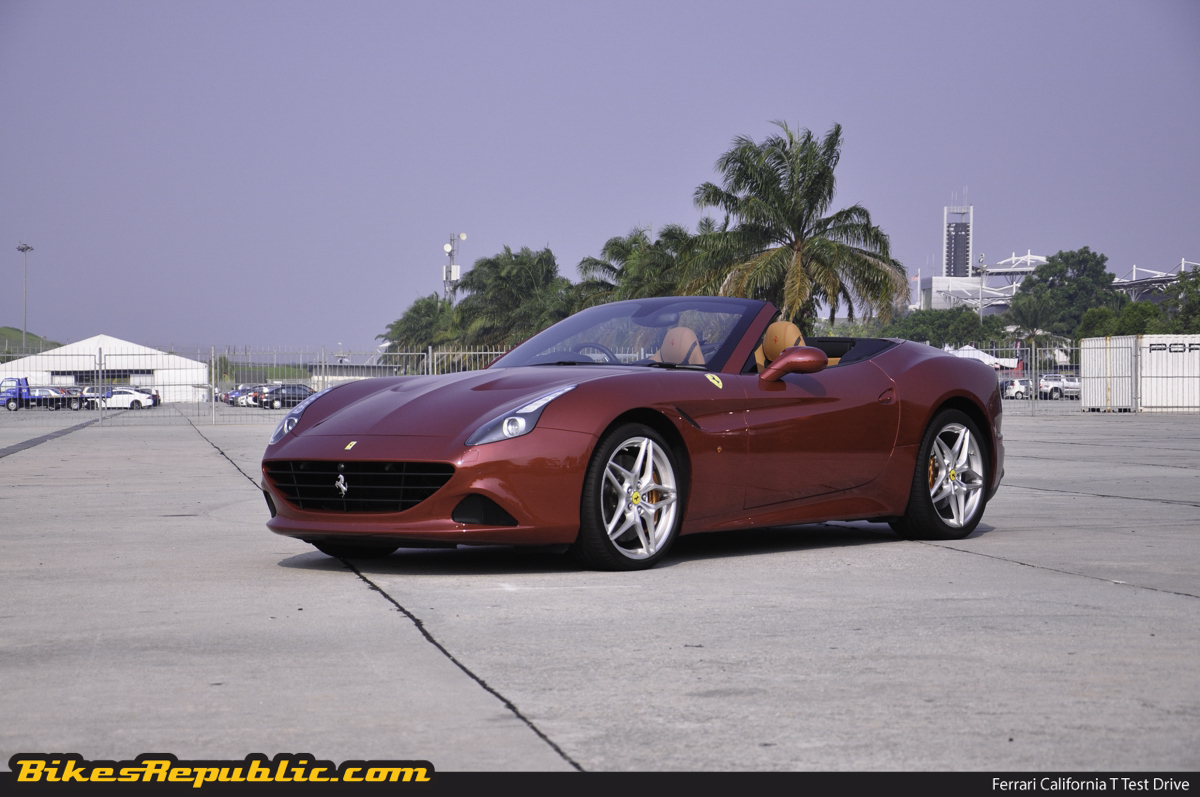 Of course, as the old saying goes, if you had to ask how much one would cost you, you can’t afford it. But to sate your curiosity, Malaysian importer and distributors Naza Italia Sdn Bhd have priced the Ferrari California T at RM888,800 sans taxes, duties, options, and the necessary registration and insurance costs. Realistically, you’d probably need at least RM1.4 million (our best estimate) to drive one out of the showroom.

All of a sudden, the all new Mazda MX-5 roadster launched here not too long ago much more do-able at its RM226,376.82 price tag. Still, no bargain-priced alternative comes close to an Italian thoroughbred such as the Ferrari California T, and we end with the same wishful dream of owning one as much as you are.