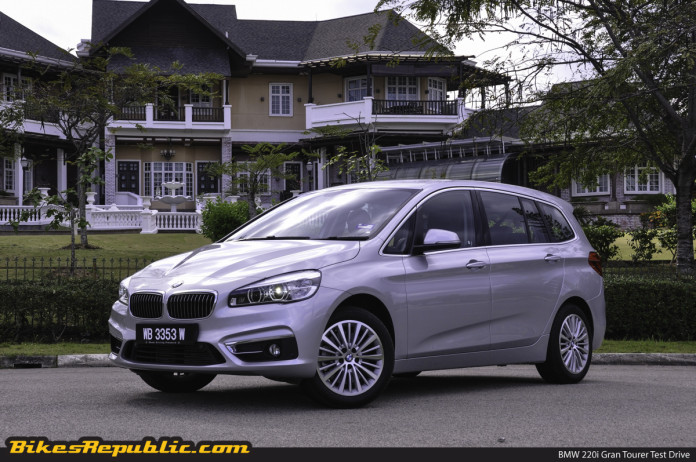 FOR many purist BMW fans, the 2 Series Active Tourer and Gran Tourer MPV models are a little difficult to comprehend at first. The same feeling was felt when BMW first ventured into the premium SUV segment with its X Series. Success eventually came for the X Series as its capabilities proved itself over time, and BMW have now taken on a bigger challenge when both its new 2 Series MPV models. 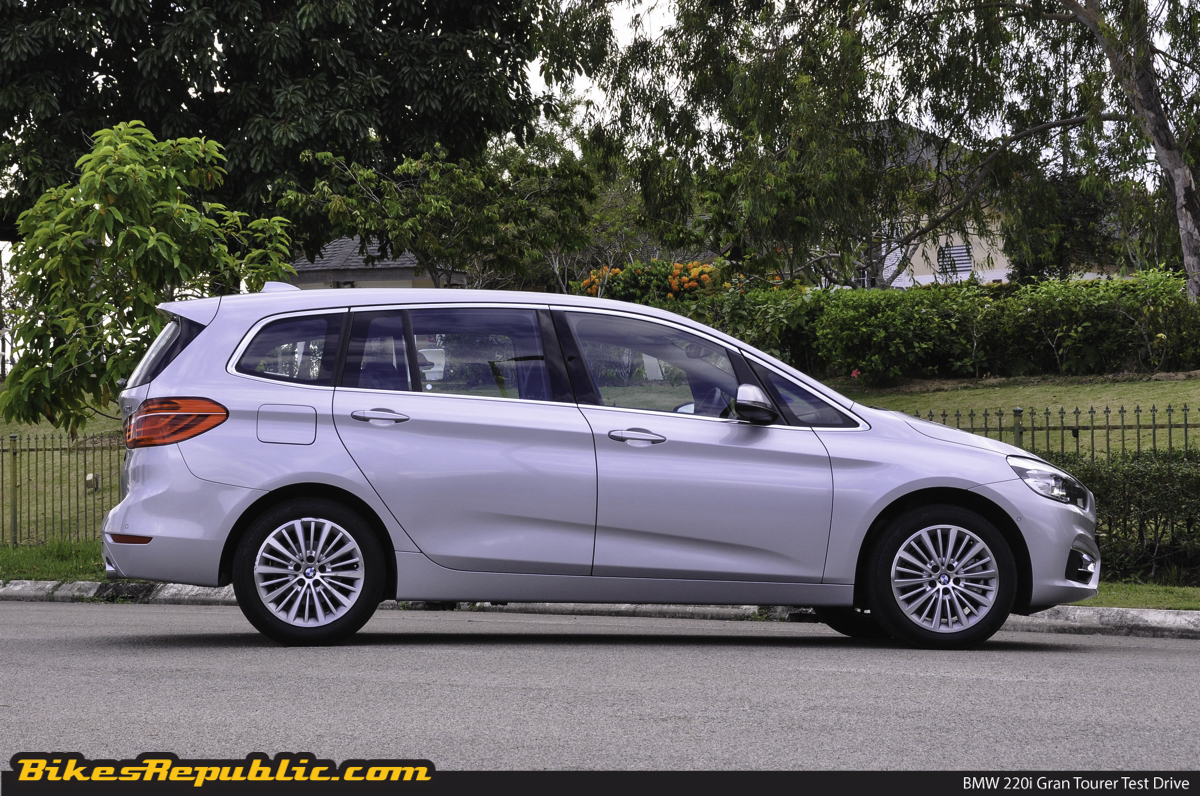 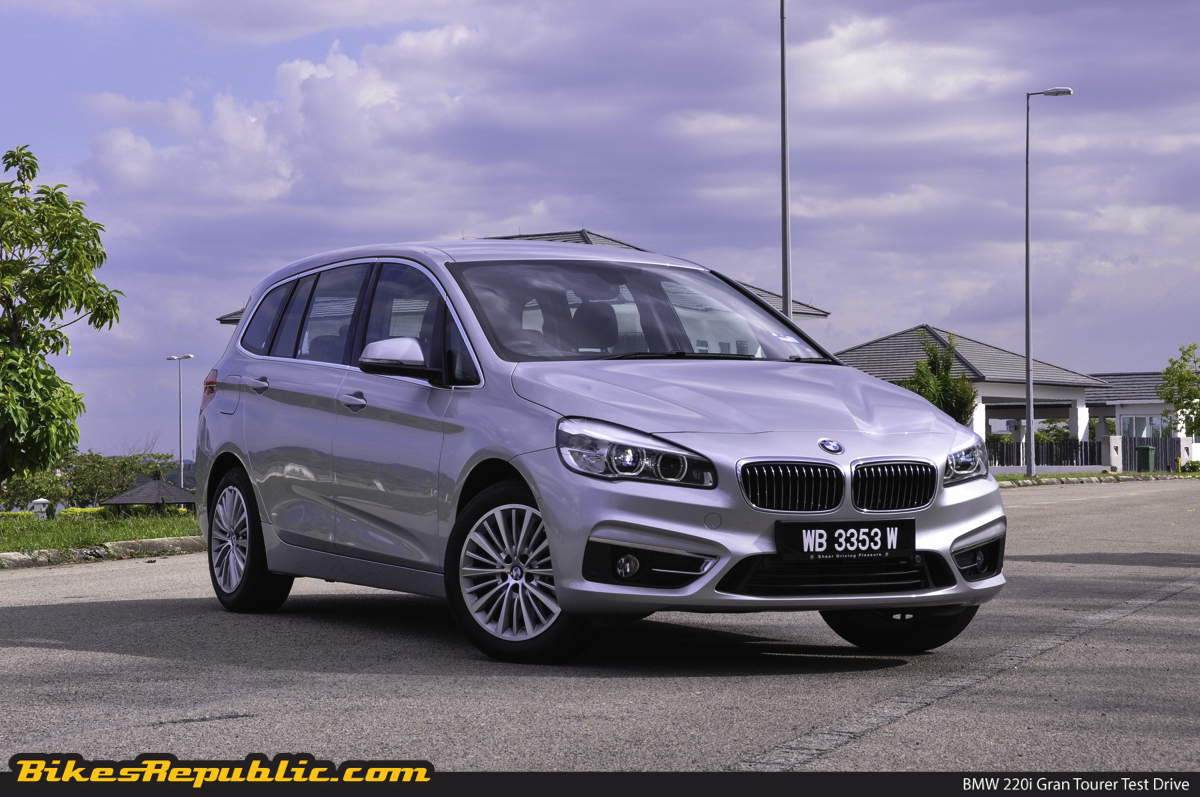 Climb aboard and things start to get familiar yet again. BMW hasn’t strayed away from its signature driver-focused cockpit design in the 220i GT, and it has not lost its touch in making plush and premium cabins either. There is plenty high-end and soft-touch materials lining key areas of the cabin such as the steering wheel and dashboard, and it is finished off nicely with leather seat covers plus a novel cabin mood lighting system. Besides the run-flat tyres’ typically noticeable noise levels at higher speeds, the cabin’s overall noise suppression levels are great, feeling just as good as any other BMW model here as well. 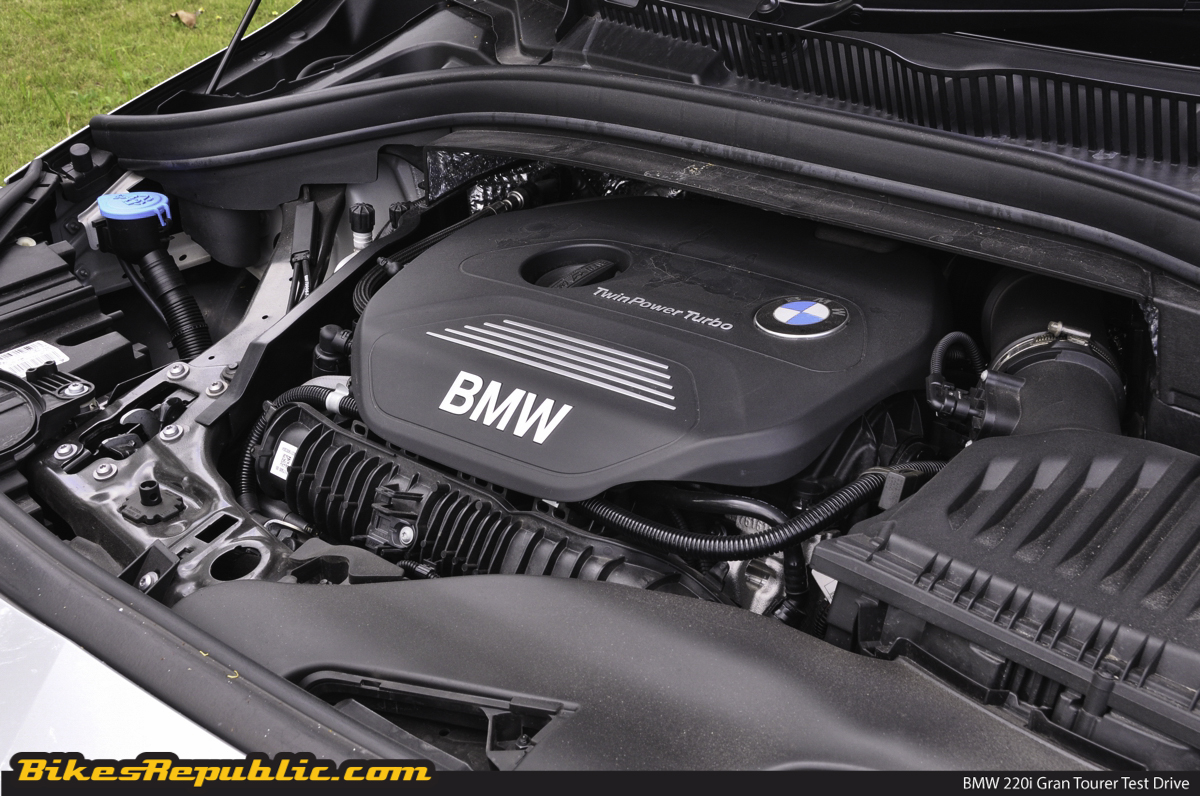 On board, space is abundant with this MPV offering generous headroom all-round, as is legroom in the second row seats. Complementing that are BMW’s array of premium creature comforts such as dual-zone automatic air conditioning with second row vents, followed by its acclaimed iDrive infotainment suite. Paired with a neat 6.5-inch display and a crisp-sounding seven-speaker hi-fi system, both the intuitive rotary knob and steering-mounted controls make it very easy for anyone to master it, with the system further offering seamless smart device integration, navigation functions and voice command ability as well.

This being the range-topping 220i Gran Tourer variant, it gains further with a pair of foldable third row seats and an extended wheelbase. The extra seats means this MPV will ferry seven people on board, at the expense of cargo space of course, whilst the latter grants increased cargo space over its smaller 218i Active Tourer sibling.  Thanks to the recline-able and slide-able second row seats, space in the third row seat is surprisingly adequate. Legroom here is a tad bit scarce for most adults, but it will easily accommodate children, making the 220i GT a sound choice for mid-sized families. 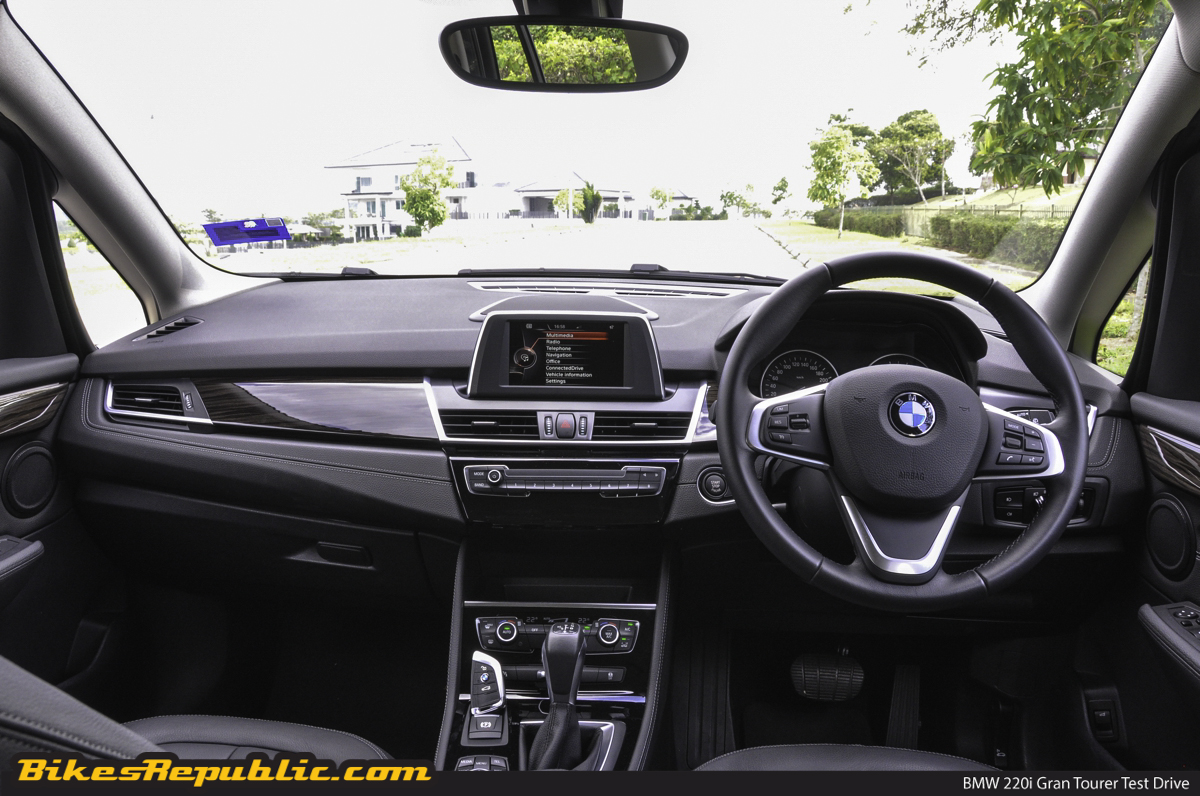 When not ferrying passengers, the 220i GT also doubles up as an excellent goods hauler. Ladies will find the powered tailgate with remote activation feature very convenient, but what we loved most here were the 40:20:40 split second row seats’ ability to fold flat down by just pressing two buttons in the boot. With both second and third row seats folded, the 220i GT’s whopping 1,905-litre maximum boot space will no doubt make those annual trips to IKEA much easier. Even with the second row seats up, and depending on how far you slide them forward, the boot still offers a decent amount of space between 645 litres to 805 litres, making it one of the most practical models BMW has ever made.

Adding further to this MPV’s overall practicality is the presence of strategically placed 12-volt sockets, which can be found in the dash, just below the second row air vents and in the boot. Needless to say, powering a multitude of devices is an easy task, making long trips less mundane especially if you have plenty of tech-savvy children. For us though, the most brilliant feature in the 220i GT’s convenience package comes from its semi-autonomous Parking Assistant feature that made side parking much easier, and we are sure this will be a hit amongst many ladies. 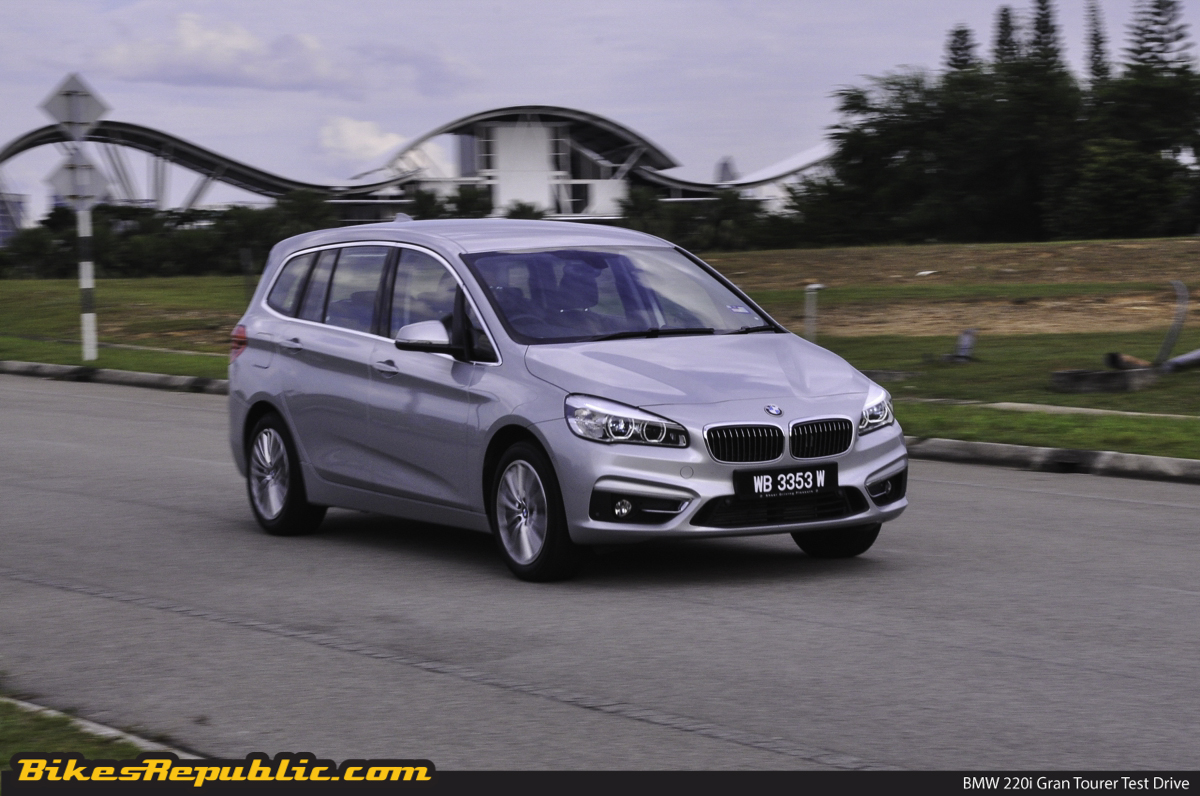 Again, purists BMW fans will find these ‘domesticated’ abilities awkward at first, but this quickly disappears once this BMW gets going. Power comes from BMW’s signature TwinPower Turbo four-cylinder petrol engine that offers 192hp and 280Nm of torque that powers the front wheels. This premium 220i GT also gains with an eight-speed automatic transmission instead of the six-speed unit found in its smaller 218i Active Tourer, offering a much smoother operation and greater efficiency as well.

Overall, the powertrain felt surprisingly perky as torque is abundant in the lower and mid rev-ranges, effortlessly hauling the 220i GT’s claimed unladen weight of 1,615kg up to speeds. As a result, the 220i GT boasts a very respectable century sprint time of 7.6 seconds as well. As far as power delivery is concerned, it feels typically German in this aspect, which is something that many of its targeted buyers will undoubtedly appreciate. 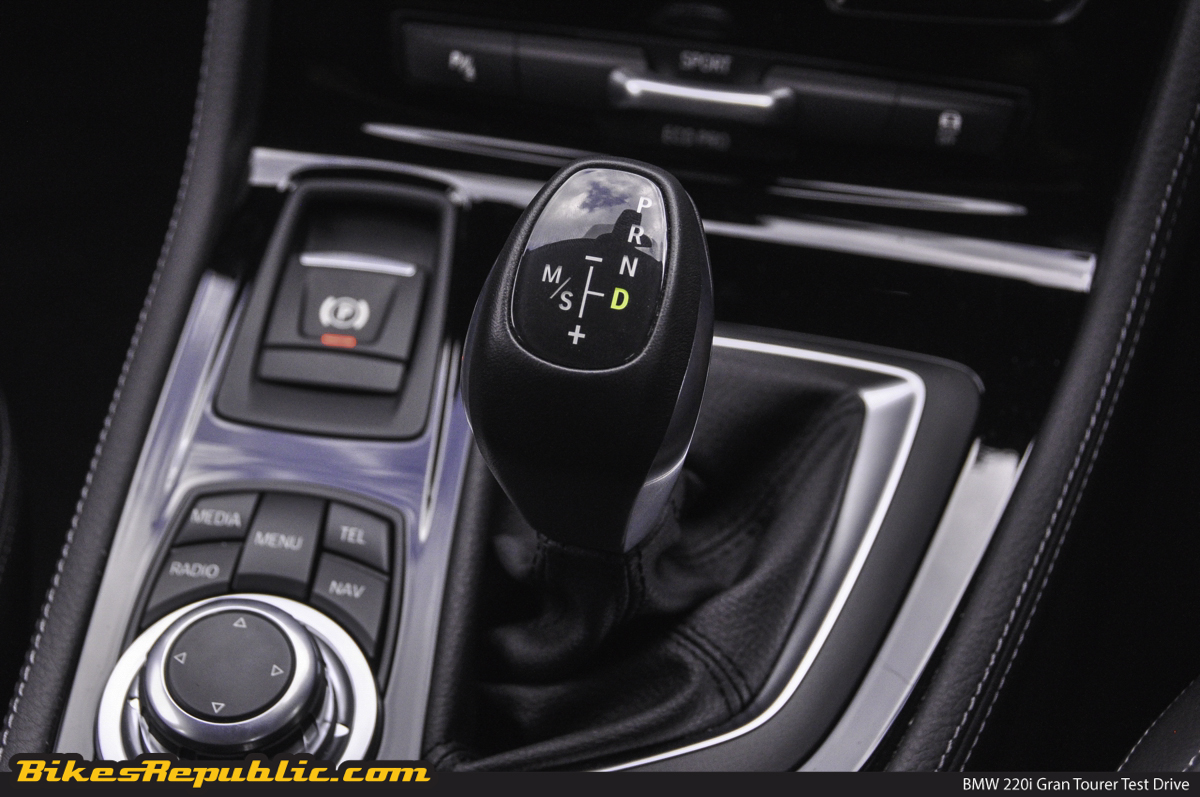 Crucially, this MPV also delivers the BMW badge’s promise of excellent drivability and handling, and it has both in abundance despite having a front-wheel-drive layout. Much of this magic comes from BMW’s experiences in developing its Mini sub-brand, resulting in this MPV’s surprisingly agile and taut handling abilities. Though the dampers offer decent levels of comfort, the 220i GT does lack some refinement in this area against its rivals, but it isn’t unbearable to say the least. There is little doubt that it will satisfy those seeking a dynamic feel to things, especially amongst folks switching up from something like a Mini Cooper or 3 Series.

The other typically German trait with the 220i GT lies in its standard array of safety features. Besides ABS brakes and electronic stability control (ESP), the 220i GT’s cabin is lined with six airbags plus two ISOFIX childseat anchors in the second row seats. It may not sound like much against some of its slightly larger rivals, but family-conscious buyers will find it very adequate, providing great peace of mind should it be tasked as a primary family mover. 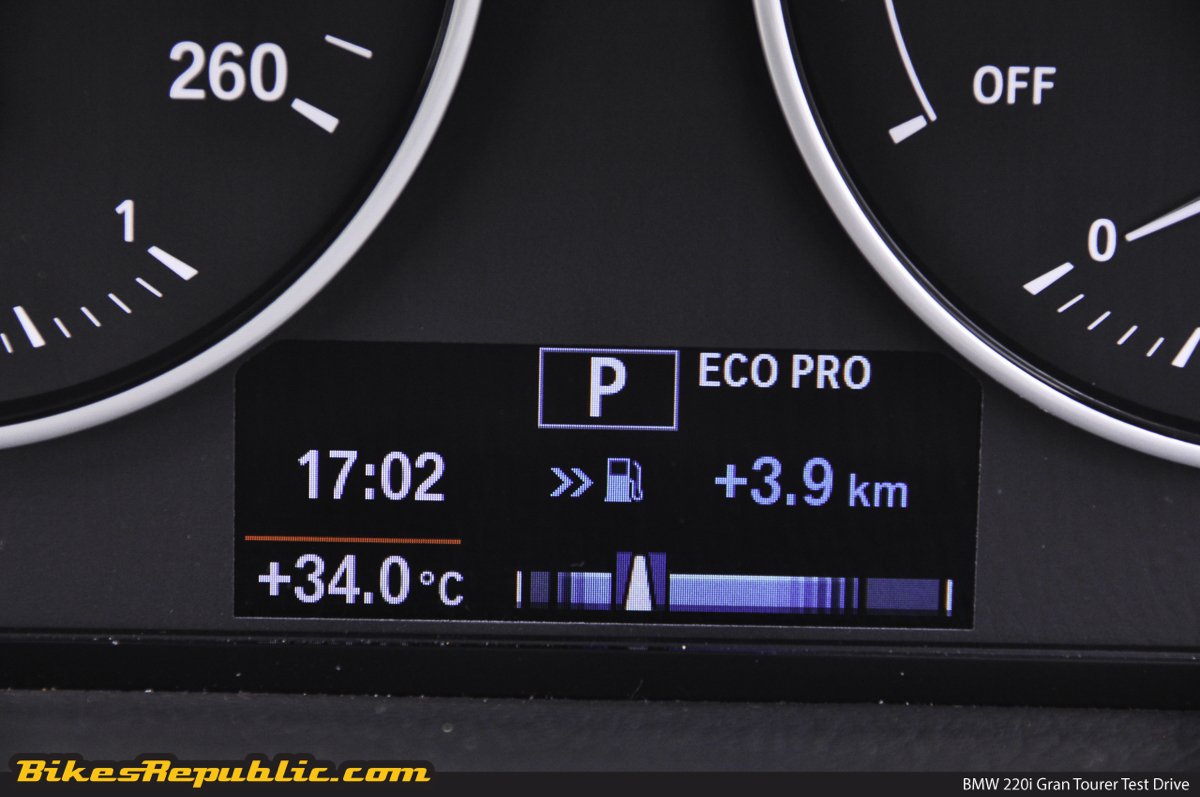 It may not be as capable as most of its segment rivals in certain aspects, but it is the only one amongst the lot that offers a high degree of plush amenities with the brand’s renowned dynamic drivability. More importantly, BMW’s first ever attempt in making an MPV sees it meeting and exceeding the expectations of many when it comes to practicality and versatility, with the famed premium badge now finally within reach in a this practical and family-oriented genre.

The only challenge left is the whether one is willing to meet the BMW 220i GT’s somewhat steep asking price of RM279,800 sans insurance costs. Thankfully, the inclusion of both a five-year, unlimited mileage warranty with a five-year or 100,000km free scheduled maintenance program in said price sees the 220i GT edge over its rivals greatly here. This is definitely the MPV that many soccer moms (and dads!) would want to have.