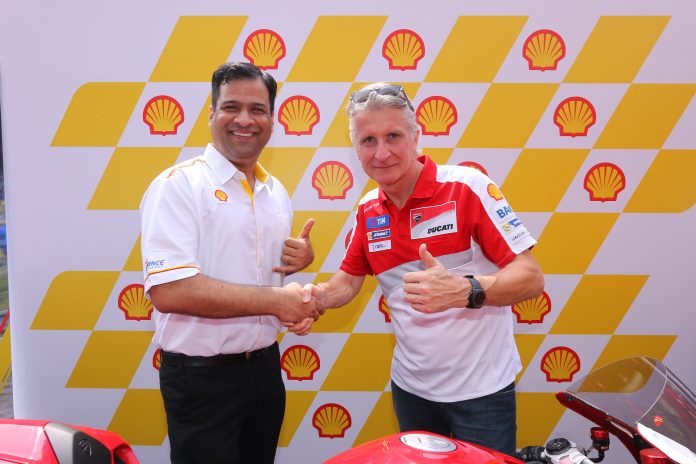 Releasing the news ahead of the latest instalment of the race in Sepang, it reaffirms Shell’s commitment to top-level motorsport and the Asian region, having been title sponsor of the event in seven of the past eight seasons since 2009.

As Shell celebrates 125 years in Malaysia, it makes SIC an especially fitting place for the company to strengthen its relationship with MotoGP, in which it also boasts a successful Technical Partnership with Ducati Corse.

Its association with the Italian manufacturer at the top of motorcycle racing dates back to 2003 and, in the past year, Shell has begun supplying the marque with Shell Advance Ultra with PurePlus Technology engine oil. Alongside Shell V-Power race fuel, these are both developed in the exacting world of motorsport for the benefit of customers around the world.

Shell’s Technical Partnership with Ducati Corse began in 1999 when Shell supported Ducati in the Superbike World Championship™. In 2003, the multiple title-winning collaboration began contesting the MotoGP World Championship together. The partnership has since gone on to become one of the strongest and most successful within the motorcycle-world, having collected six World Superbike Riders’ Titles and nine Manufacturers’ Titles, along with a clean sweep of the MotoGP Riders’, Teams’ and Constructors’ World Championship titles in 2007.

In 2013, Shell extended its Technical Partnership to include Pramac Racing. This followed the announcement that the Pramac squad would become an official Ducati factory-supported team.

Shell’s involvement in premier class motorcycle racing has helped develop the Shell Advance oil and Shell V-Power fuel for the road, so that bikers all over the world can benefit from the cutting-edge technology developed on the track. In fact, Ducati also chooses Shell Advance oils and Shell V-Power fuel as the first fill for every Ducati leaving the factory in Bologna, Italy.

This transfer of knowledge gained from the track to Shell’s products for the road, is central to the Technical Partnership with Ducati, as MotoGP provides the most extreme test bed for Shell’s products.

Scientists from Shell’s Technology Centre in Hamburg, Germany, regularly visit the Ducati factory in Bologna and are closely engaged with Ducati engineers to ensure that the Shell Advance race oils and Shell V-Power race fuels are optimised to power and protect the Ducati engines in MotoGP. A rigorous testing programmed runs all year round, with samples from the races analysed back at the Shell laboratories to ensure constant development and performance. The fuels and oils developed must not only meet the sporting regulations, but match the exacting requirements of the Ducati MotoGP Team itself.

Ducati Corse and its Technical Partner, Shell, undertake extensive and rigorous testing of the bespoke Shell Advance formulations to gain a detailed understanding of the Desmosedici GP engine’s frictional characteristics and lubrication requirements. This enables the companies to develop the hardware and oil in order to achieve maximum benefit – unlocking valuable performance whilst maintaining durability.

Alongside the continued demands for greater power and performance, increased fuel economy has become a major requirement within MotoGP. Shell works with Ducati and employs a wide range of testing techniques to understand the fuelling demands and combustion characteristics of the Desmosedici engine and strives for the optimum balance between power and fuel economy.

Shell’s 18-year Technical Partnership with Ducati Corse has grown into one of the most successful collaborations in motorsport. Working shoulder-to-shoulder with the Ducati team in both MotoGP and World Superbike, what Shell learns from its extreme testing environment on the racetrack is used to provide bikers all over the world with high performing lubricants.

Shell and Ducati undertake extensive and rigorous testing of the Desmosedici GP16 engine’s frictional characteristics and lubrication requirements. This enables the companies to develop the hardware and lubricant in order to achieve maximum benefit – unlocking valuable performance whilst maintaining durability.

The eighth round of the 2015 MotoGP World Championship is Assen, Netherlands (27 June) marked a moment in history – the competitive debut of Shell Advance formulation with PurePlus Technology by the Ducati Team in MotoGP.

Shell Advance Ultra with PurePlus Technology is the first-ever motorcycle oil made from natural gas using Shell proprietary gas-to-liquid (GTL) technology. Shell PurePlus Technology converts natural gas into crystal-clear base oil with virtually none of the impurities found in crude oil. This ultra-pure base oil is a key element of the lubricant used by the Ducati Team in MotoGP, a product that epitomes the ever-evolving Technical Partnership between Shell and Ducati and the continuous quest for superior performance.

Shell Technical Partnership with Ducati Corse has grown into one of the most successful collaborations in motorsport, winning nine Superbike World Championship titles and the 2007 MotoGP Riders’, Manufacturers’ and Teams’ championships. Working shoulder-to-shoulder with the Ducati Team, what Shell learns from the extreme testing environment on the racetrack, is used to provide bikers all over the world with high performing products such as Shell V-Power Gasoline.

This commitment to innovation through motorsport in an integral part of Shell’s extensive Research & Development programme that is key to making better fuels for its customers. The Technical Partnership with Ducati provides Shell with an ideal environment to test Shell V-Power Gasoline fuels under extreme conditions, providing our scientists with a better understanding of what will deliver improved power and performance. Shell V-Power Gasoline is designed to give more responsiveness by removing and preventing the build-up of power-robbing engine deposits.

Shell products have consistently delivered throughout the partnership, with Shell’s continued goal to provide Ducati with reliability whilst optimising power output for the bike. At the core of this relationship lies a common passion for technology: Ducati develop its legendary race and road bikes, while Shell works to design high-performing fuel and lubricants for the benefit of customers worldwide.