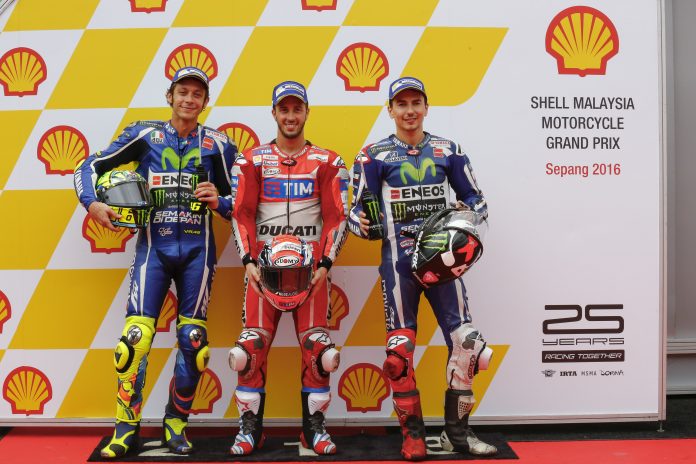 Andrea Dovizioso of the Ducati Team ran a strong qualifying session with a gap of more than half a second to secure the pole position for tomorrow’s race at the Sepang International Circuit (SIC) Valentino Rossi of the Movistar Yamaha MotoGP took the second spot on the starting grid where as his team mate, Jorge Lorenzo, completed the front row securing the third position. 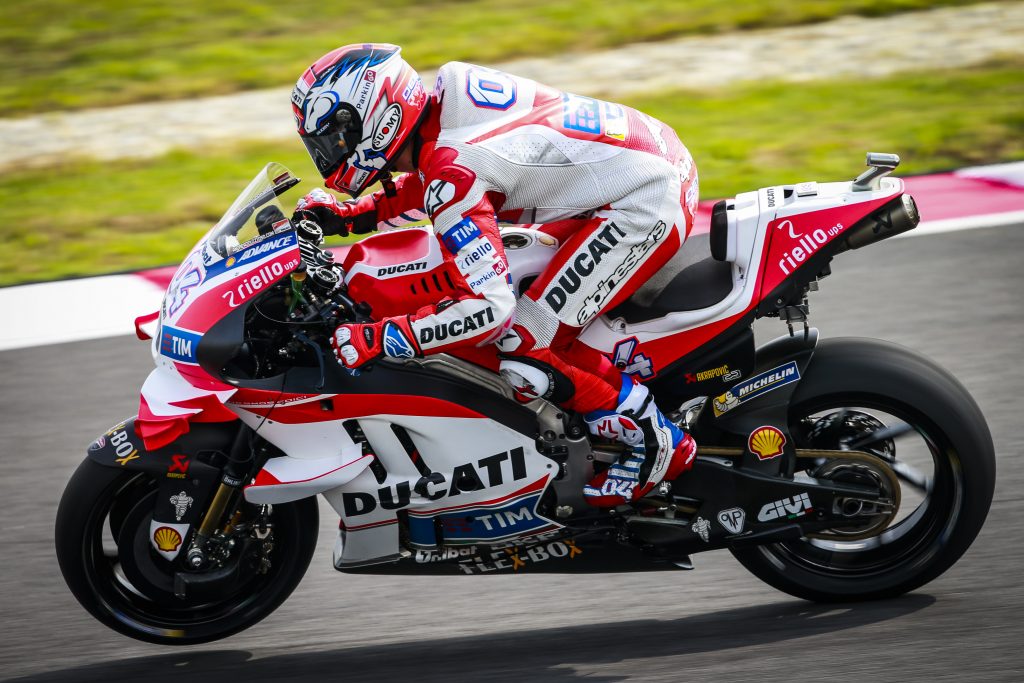 Apart from the front row, Cal Crutchclow of the LCR Honda team ran a quick pace in the Q1 session together win Loriz Baz of the Avintia Racing team, which led them to join the Q2 session right after. Even in the wet conditions, Crutchclow made it to fifth position, right in the middle of Marc Marquez of the Repsol Honda who secured the fourth spot and Andrea Iannone of Ducati in sixth. 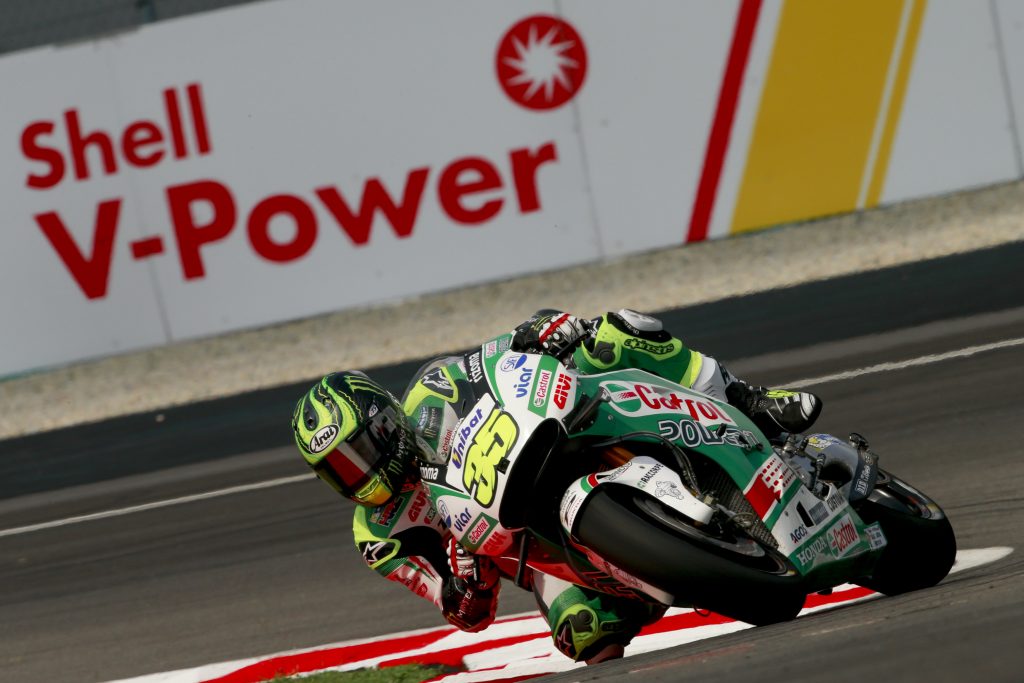 Lorenzo on the other hand proved to everyone that he too can be competitive in the wet with the Michelin tyres. Feeling comfortable with the grip and the track, Lorenzo fought for the the front row position with the other riders and comfortably qualified third. 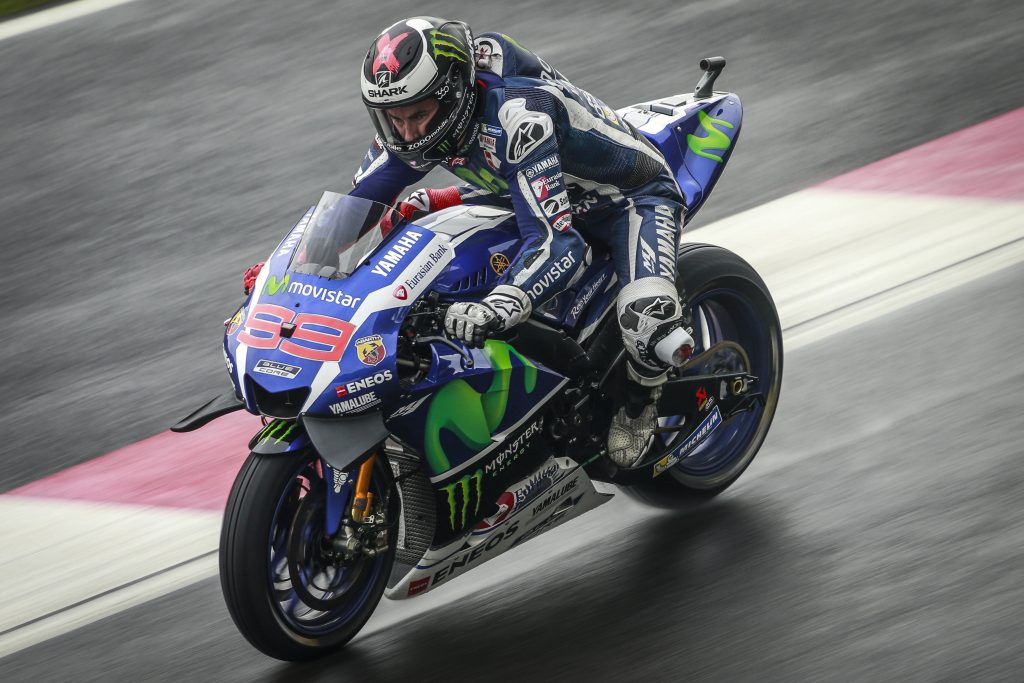 The 2016 MotoGP World Champion, Marc Marquez impressively secured 4th position even when struggling with poor health that has been affecting his performance throughout the free practice and qualifying sessions.

The Suzuki duo, Aleix Espargaro and Maverick Vinales managed to secure seventh and eighth positions together with Alvaro Bautista of the Aprilia Racing Team Gresini to complete the third row of the grid. 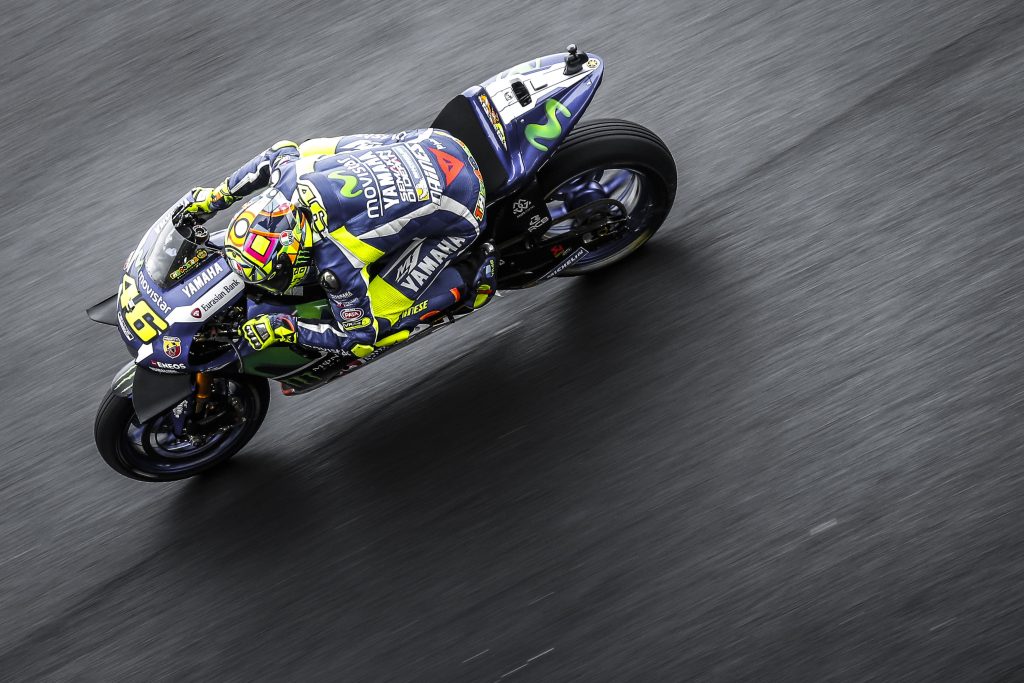 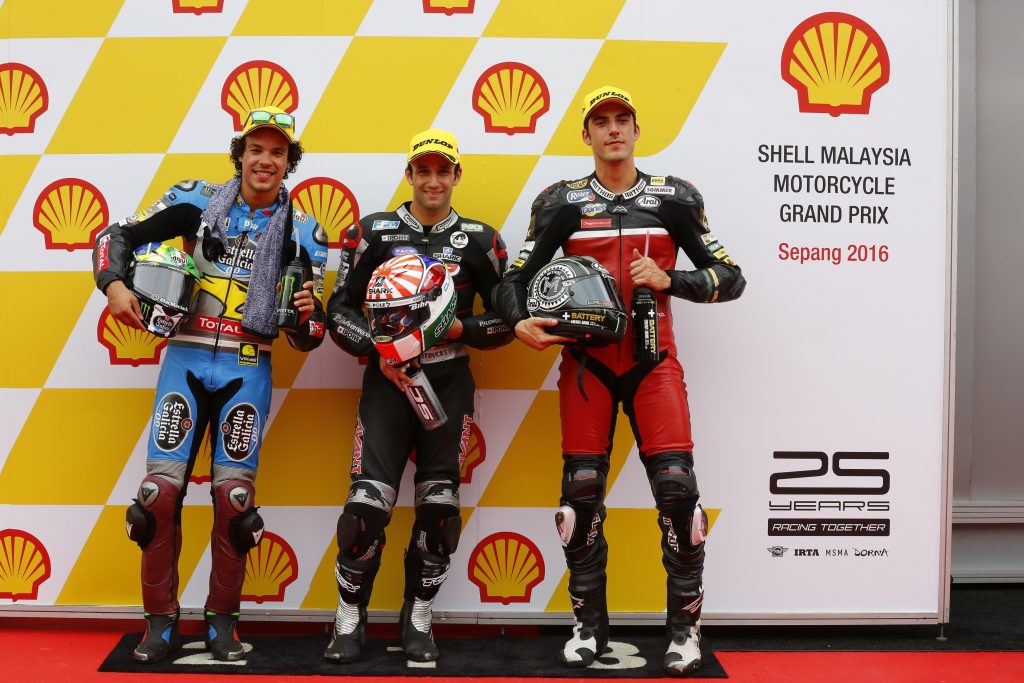 Johann Zarco of Ajo Motorsport ran an unbelievable pace with a gap of more than 2 seconds ahead of the second fastest Moto2 rider of the day, Franco Morbidelli of Estrella Galicia 0,0 Marc VDS. Axel Pons of AGR Team completes the front row at the very last minute but at the pace of almost 3 seconds behind the pace of the top qualifier, Zarco.

Morbidelli ran a strong pace thoughout the Qualifying session but Zarco increased his pace rapidly as the track started to dry. Axel Pons gambled with a rear slick and paid off as he secured the third position ahead of the master of wet conditions, Jonas Folger of the Dynavolt Intact GP team, who secured 4th spot. 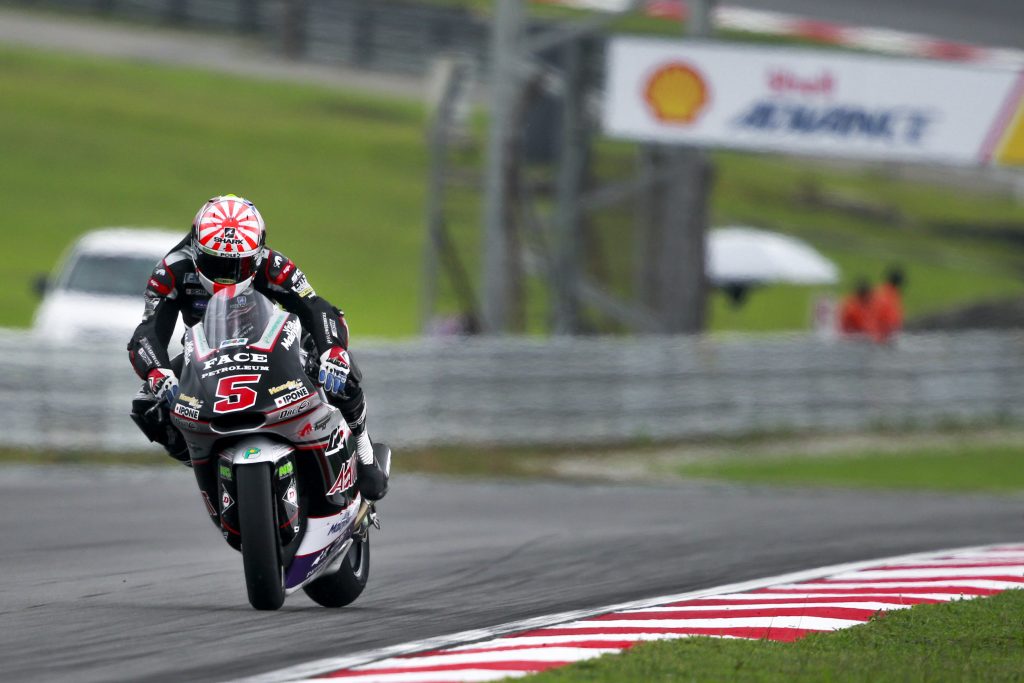 The closest contender for the 2016 Moto2 championship, Tom Lüthi of the Garage Plus Interwetten only managed to secure 5th in the middle of the second row as he was struggling with the difficult conditions of the Sepang International Circuit. Lorenzo Baldassarri of the Forward Team completes the second row in sixth position.

Our hometown hero and wildcard rider, Ramdan Rosli of the Petronas AHM Malaysia team, ran a solid run. He managed to get a good feel of the track in the changing conditions to secure the 12th position, completing the fourth row of the race.

Hafizh Syahrin of the Petronas Raceline Malaysia also did quite well in qualifying who is only two positions away from Ramdan Rosli. With the weather being uncertain for tomorrow’s race, our lads will give it their all and by the end of the race, we might just find out who will be crowned as the Moto2 World Champion. 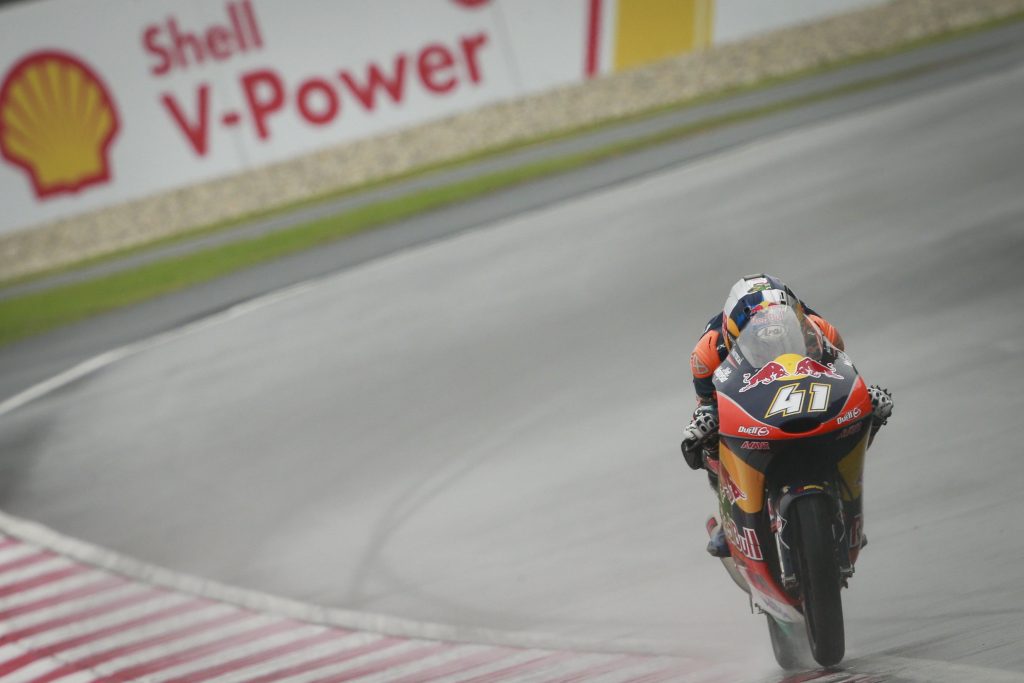 Brad Binder of the Red Bull KTM Ajo grabbed the top qualifying spot at the very last minute of the session, surprising everyone including the two riders who were constantly in battle throughout the qualifying session, Jorge Navarro of Estrella Galicia 0,0 and Francesco Bagnaia of Pull&Bear Aspar Mahindra.

The qualifying session was red flagged due to heavy rain and the riders quickly came back into the pits to make the necessary changes to run in the wet. With only 19 minutes on the clock, all of the riders quickly got out once the track reopened to set their lap times. 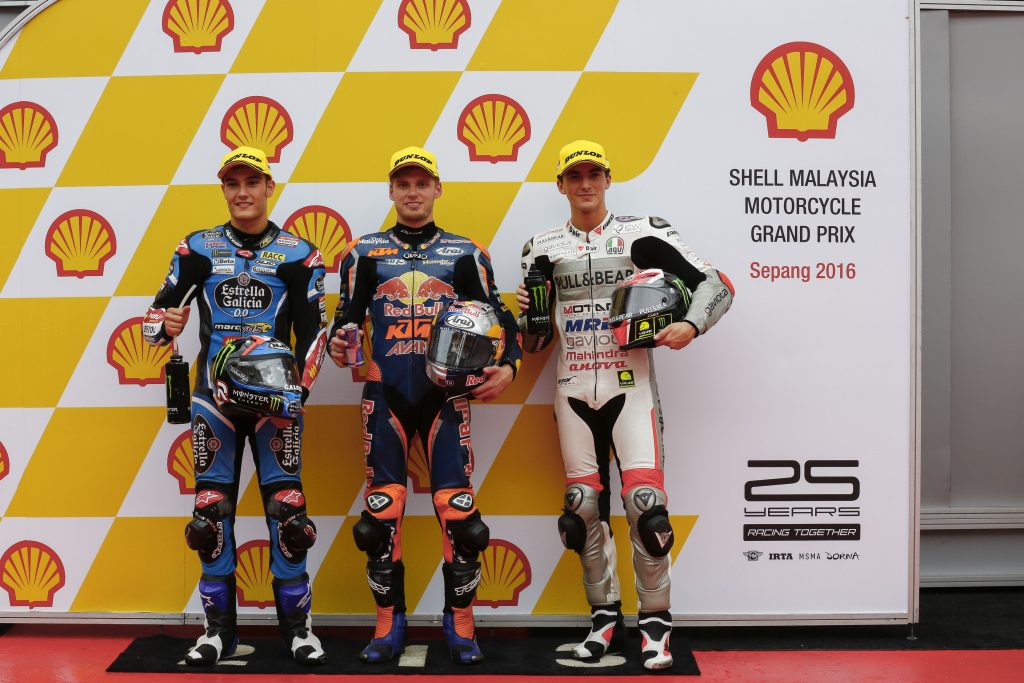 With the wet conditions, the fans had high hope for our Moto3 hero, Khairul Idham Pawi of Honda Team Asia to be battling for the top spot in qualifying. With poor setup of the bike giving Khairul Idham less than desirable feeling of the bike, he only managed to secure 20th spot on the grid.

Adam Norrodin of the Drive M7 SIC Racing Team did slightly better the Super KIB, where he placed 18th for tomorrow’s race. Adam was quite strong during the practice sessions but the ever changing conditions affected his performance at the end of the qualifying.

Our final Malaysian hero and wild card rider, Hafiq Azmi claimed the 22nd position of the grid after more than a year of the Moto3 bike. He will be racing for the Peugeot MC Saxoprint, replacing the injured John Mcphee. Considering the fact that he only had limited time to get familiar with the bike and team, 22nd position is considered as an impressive feat.

The condition of the race tomorrow is still uncertain but what we know is that it will be very interesting indeed.