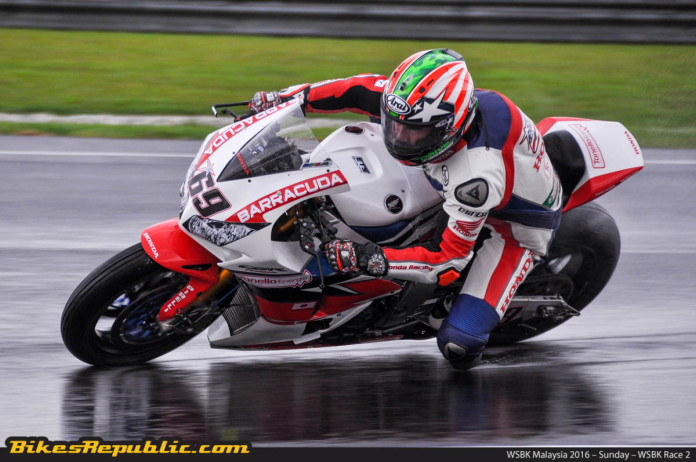 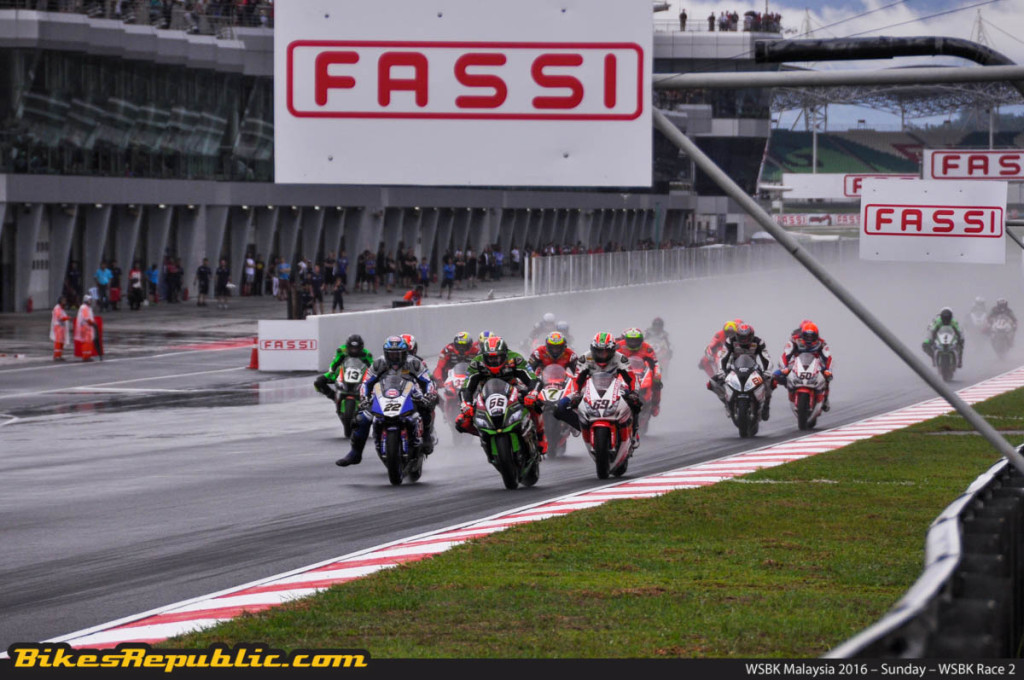 As a rain storm rolled in over the Sepang International Circuit (SIC) today, it not only delayed the day’s scheduled WSSP race, it wreaked havoc with the front runners in the second race of the World Superbike Championship (WSBK).

The wet conditions proved to be a challenge too huge for front-runners like the Kawasaki Racing Team duo of Tom Sykes and Jonathan Rea, winners of Race 1 held yesterday under dry conditions. The unlikely winner today came in the form of American rider Nicky Hayden. 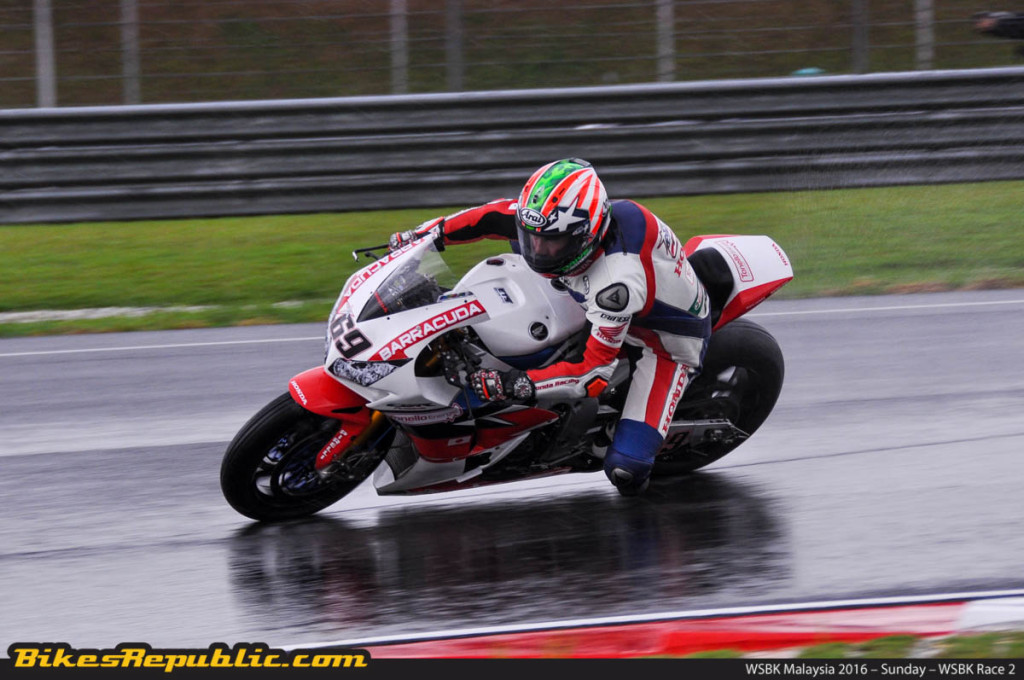 Astride the Honda World Superbike Team CBR1000RR, the race conditions favoured the former MotoGP rider perfectly as he stormed into the lead with his perfect start from fourth position on the grid. Hayden’s masterclass performance in wet weather riding saw him take his first WSBK race win with a comfortable gap of 1.254 seconds ahead of the field. 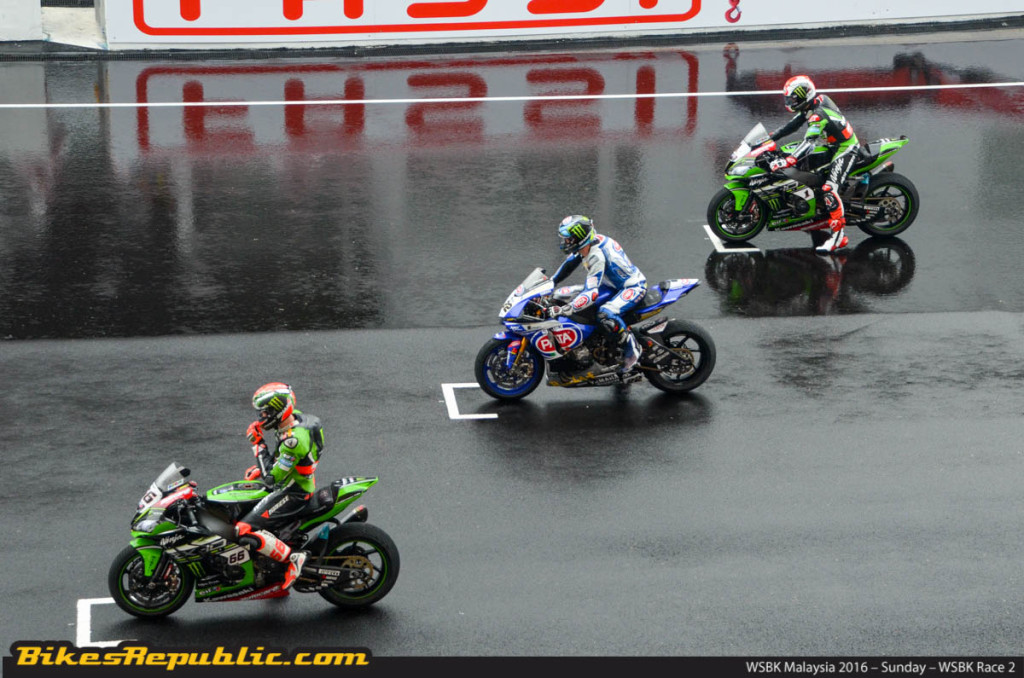 Faltering in the wet were Sykes, Rea and Alex Lowes. Starting from second on the grid astride the Pata Yamaha YZF-R1, Lowes was forced to retire from the 16-lap race with just 4 laps remaining, bringing an end to what was a seemingly perfect start to the weekend in Malaysia for him. 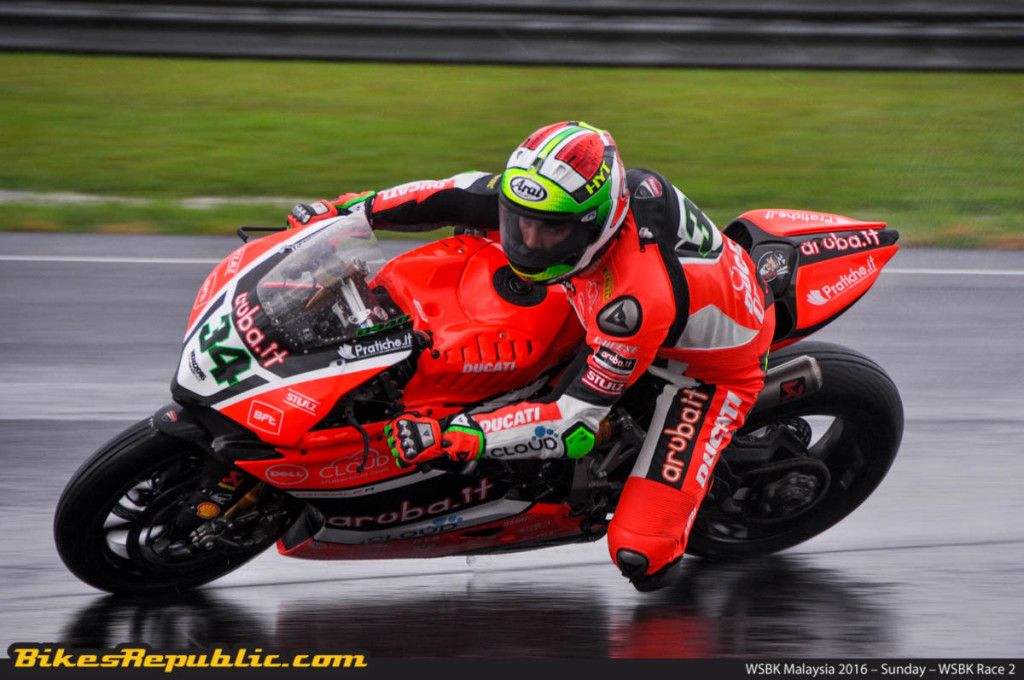 Coming in second was Aruba.it Racing – Ducati rider Davide Giugliano.  Starting from the third row of the grid in ninth, The Italian rider and teammate Chaz Davies, both astride the scarlet Ducati Panigale R superbikes, were hard at work in climbing up the order, with Giugliano’s pace culminating in his epic move at overtaking Davies midway through the race.

Tried as he might, Davies wasn’t able to fend off the resurgent Jonathan Rea who, despite having dropped down the order from his poor start out of third on the grid, was able to fight his way back up. 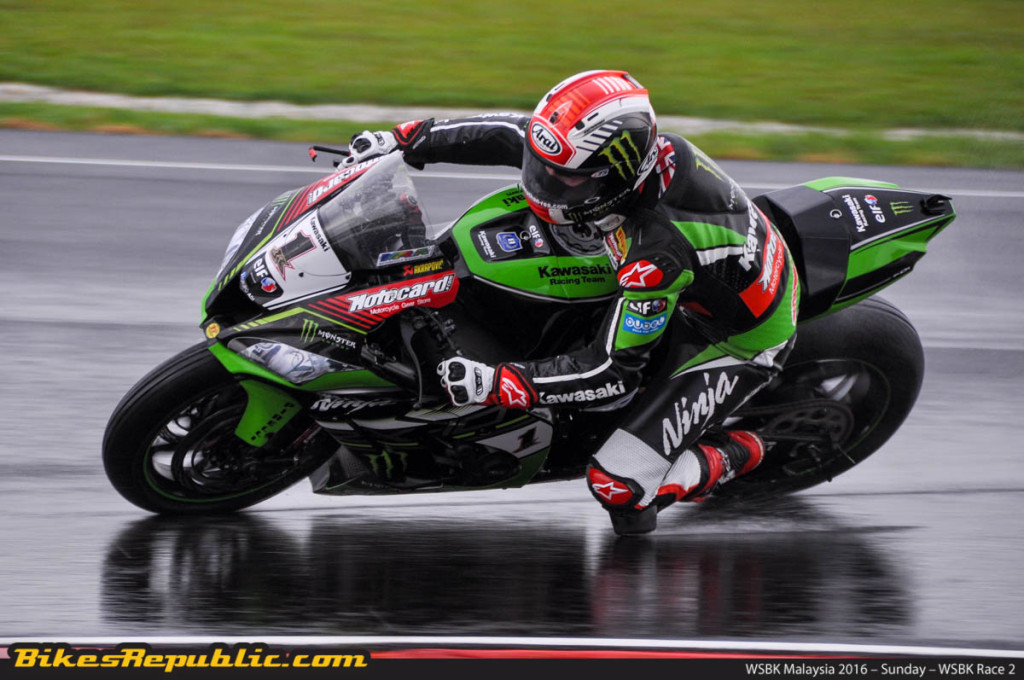 Though it didn’t come cheaply, the podium finish garnered today was what the Brit needed to retain his lead in the WSBK championship standings. Rea still leads the field here with 257 points and looks on course towards defending his title in 2016. 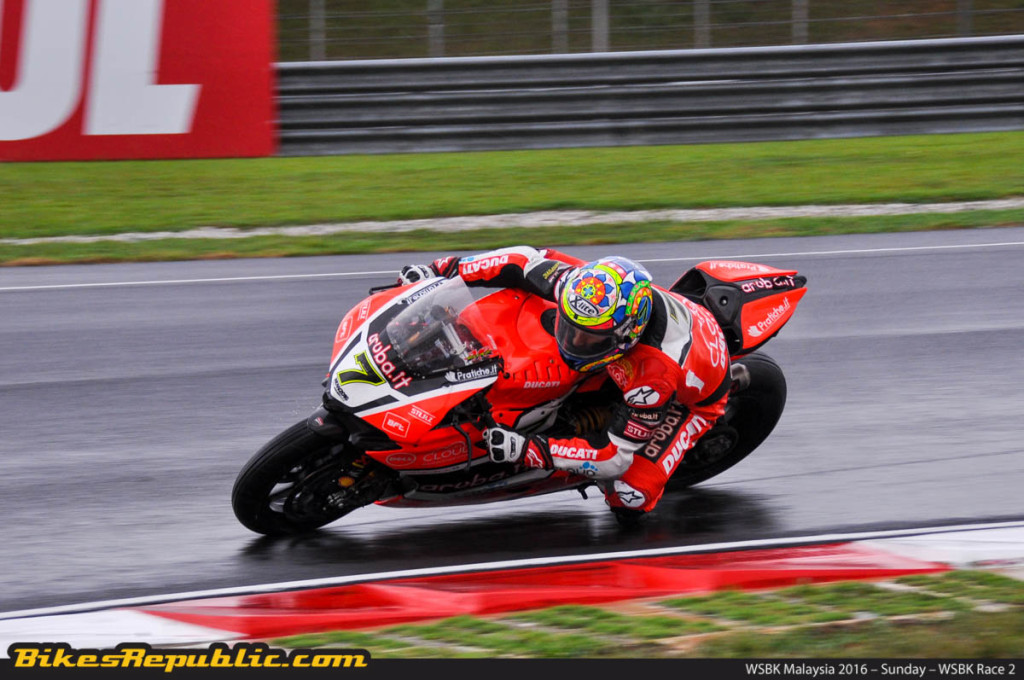 Ducati’s Chaz Davies remains second in the standings. His fourth place finish today sees him raising his total up to 215 points. Sykes, who managed to classify himself in eighth in today’s race, ranks in third still with 187 points. 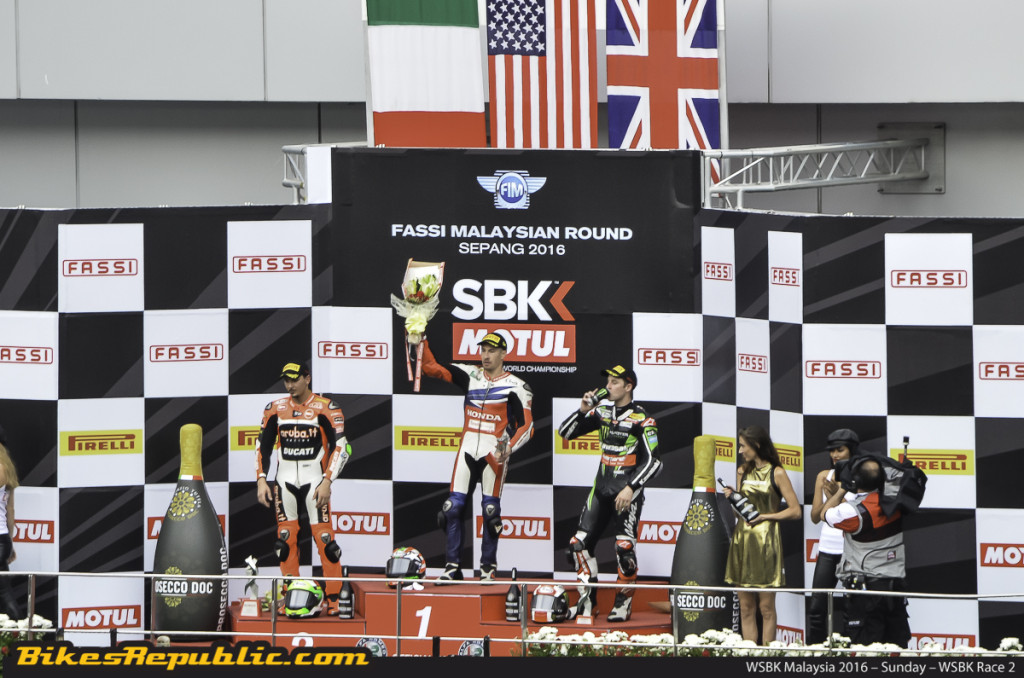 As the teams and riders in both WSBK and WSSP mark their exit out of Malaysia, all their attention is now focused on the upcoming sixth round scheduled to take place in just a fortnight’s time in the UK’s Donington Park. 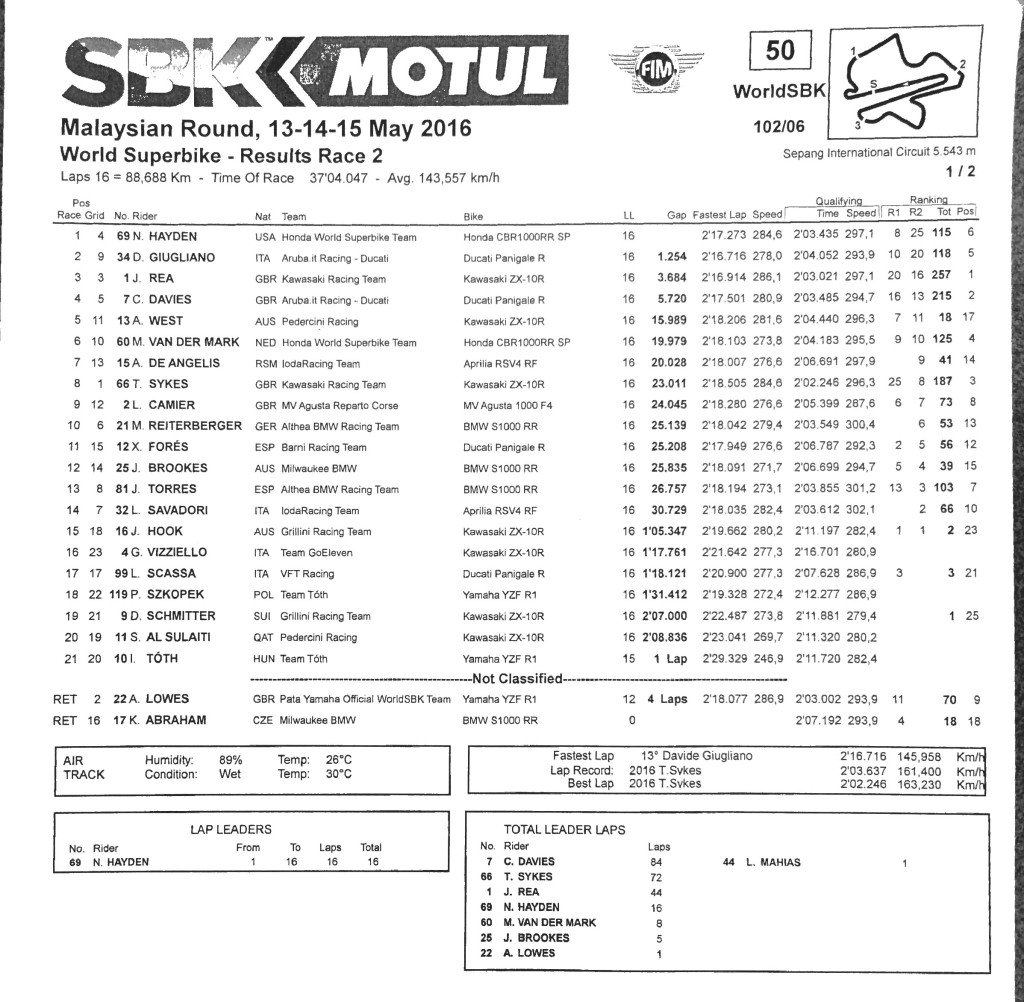