Watch one of the most bizarre drag bike race finishes ever recorded during the Australian 400 Thunder drag racing series.

This is perhaps one of the most bizarre, dramatic and epic race finished we’ve ever seen. The video starts off with two Australian drag bike competitors, Maurice Allen and Ryan Learmouth, getting to grips with their prized speed machines before undertaking their drag race contest.

Both Learmouth and Allen are competing in the Pro Bike category of the Australian 400 Thunder national championship. Each of them had AUS$150,000 machine designed to complete the quarter-mile (400 metre) sprint in less than five seconds at speeds exceeding 270km/h.

However, what unfolds as soon as the lights go green was bizarre to say the least. Whilst Ryan Learmouth apparently stalled his bike before setting, off, Allen managed to get his red-painted crotch rocket going, but the bike soon began loosing power and speed before eventually spluttering to a halt as well. 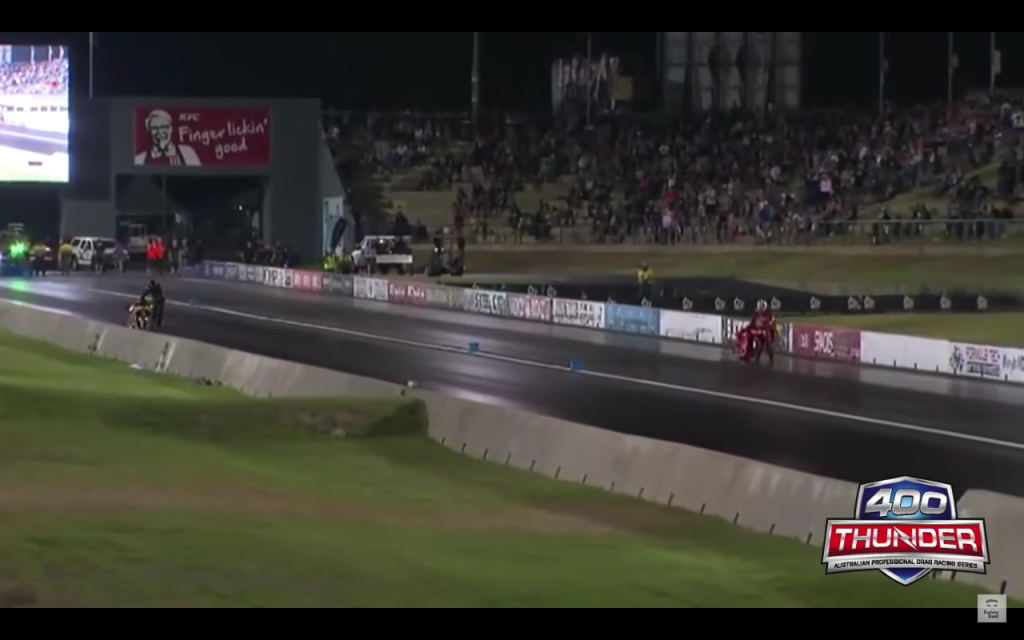 What happens next is a true display of determination in doing whatever it takes to win. As the reigning series champion, Maurice Allen soon hopped off his bike and began pushing it towards the finish line. It did not take long for Ryan Learmouth, who was still far behind at the starting line, to do the same and attempt to catch up with Allen.

With a significant lead, Allen eventually crossed the finish line first ahead of Learmouth who also completed the bike-pushing race not long after. As a result of using their footpower to replace the absence of horsepower, both riders appeared slightly winded when race officials greeted them at the finish line.

Check out the video posted above to relive that bizarre yet epic moment that can only happen in motorsports.