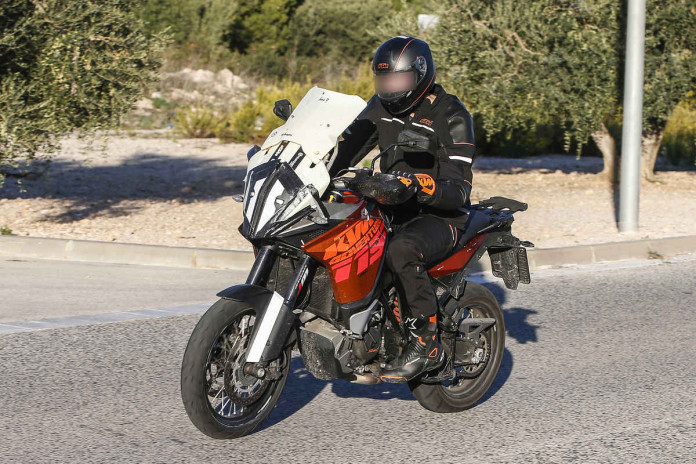 The second KTM prototype spotted undergoing tests recently is reportedly to be an updated version of the KTM 1190 Adventure.

Since its segment rivals (read Triumph Tiger Explorer and BMW R1200GS) have undergone extensive updates for 2015 and 2016, it was only a matter of time before the famed Austrian came up with an answer against them.

Based on this sole spyshot, the revised KTM 1190 Adventure will get a facelift. Supporting this is the prototype’s heavy camouflage on its forward area. Besides a larger new windscreen, the restyled front fairings also gained with two new small air vents just under the signal lights.

Furthermore, the heavy camouflage in the forward fascia likely suggests a new headlight design too.

The updated KTM 1190 Adventure’s arrival date remains uncertain for now, but since this is an updated model, we should likely see it debut as early as October during this year’s edition of INTERMOT show in Germany at least.

This updated KTM 1190 Adventure is the second new model spotted testing with a new KTM 890 Duke prototype. You can also check out our recent test-ride with the 1190 Adventure smaller sibling, the KTM 1050 Adventure.