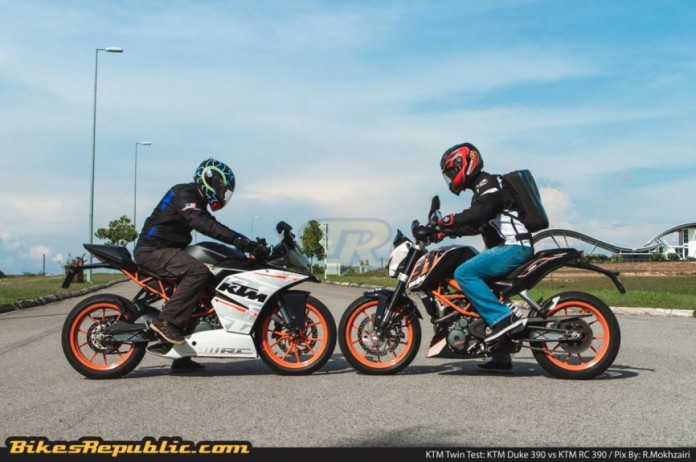 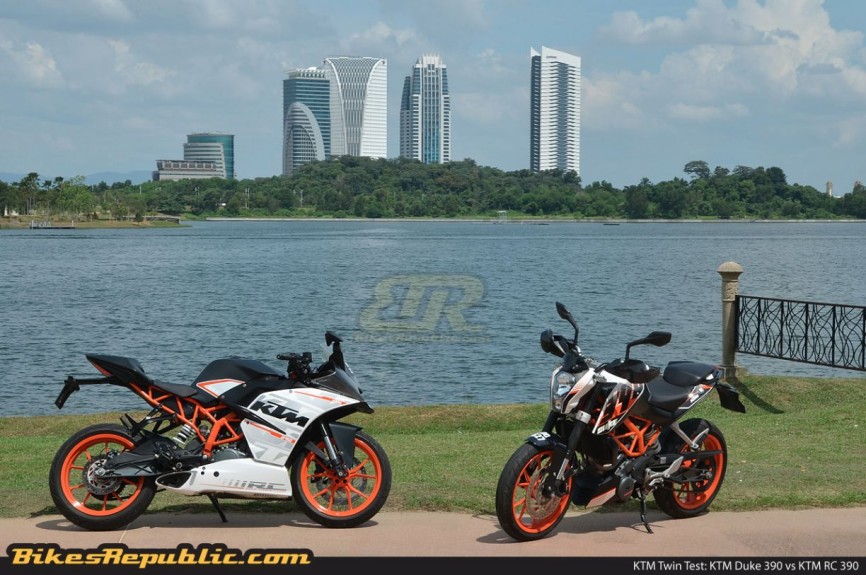 It is a known fact that KTM makes bikes that offer the most amount of fun for relatively little money. Fuelling this is the fact that some of its more popular models, like the Duke naked and RC sport bikes, are assembled locally in Jitra, Kedah, by its local assembly arm KTM Malaysia CKD.

Suffice to say, if you had just under RM30,000 to spend on a new bike, and you wanted a proper European flavour to it instead of a Japanese one, all you are left with is KTM’s 200-series and 390-series Duke and RC models. Obviously, if you seek better power and performance, the 390-series will likely fulfil this desire.

So, which of the two is best suited for you? Well, with a little help from our colleague in sister site MotoMalaya.net, we managed to secure ourselves a weekend with these two monstrous singles to find out just that. 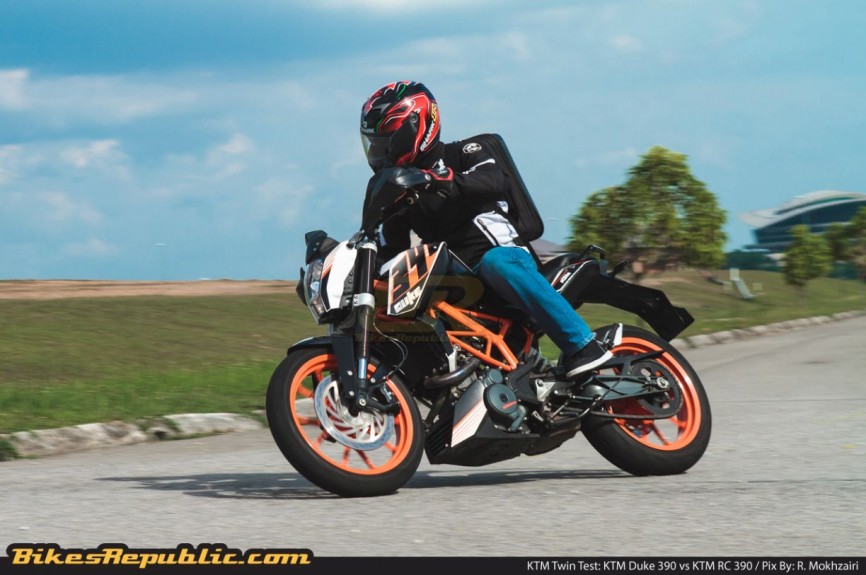 Duke 390
In more ways than one, the Duke 390 is a staple product from the Austrian brand. With this ABS-equipped model carrying a basic selling price of RM24,716.98 (excluding GST, Insurance, etc.), this affordable naked has got it all – style, power, and presence.

Marketed as a sporty naked or ‘roadster’, the Duke 390 is powered by KTM’s venerable fuel-injected 373.2cc liquid-cooled four-stroke single-cylinder mill that makes 43hp@9,500rpm and peak torque of 35Nm@7,250rpm. All that is sent to the rear using a six-speed chain-drive manual transmission, and effortlessly propels this Duke’s 139kg (unladen) weight up to speeds. 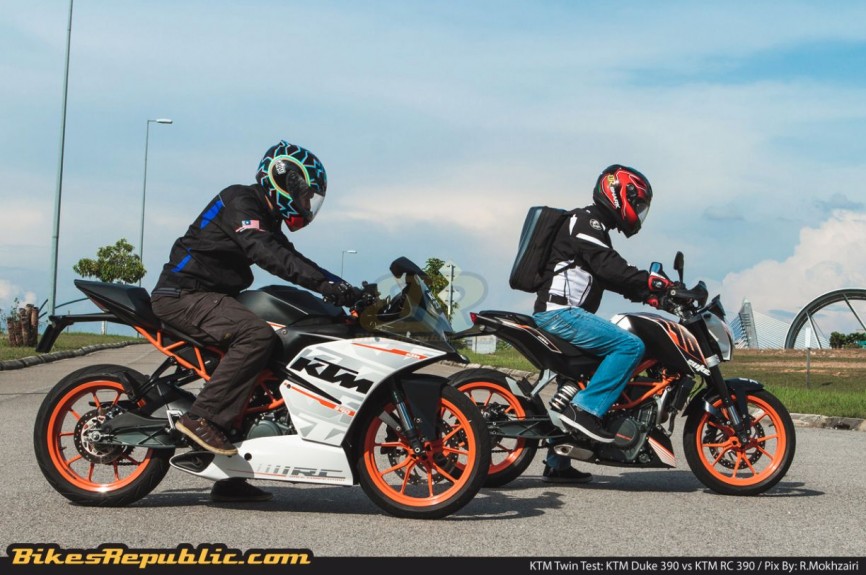 Being a standard naked, the Duke 390 dictates a more upright riding position, and this is supported by the high and wide handlebar position. That, plus the more relaxed position of the footpegs, makes riding the Duke 390 a fairly easy and comfortable affair, whilst the low 800mm seat height welcomes just about anyone to astride it.

The downsides to this naked are relatively few and predictable. These include the lack of wind protection, plus the excess engine vibration felt in the handlebars, footpegs, and seat. Let’s also not forget the embarrassing soundtrack of that stock under-swept silencer exhaust, and this single-cylinder mill’s relatively high amounts of heat getting into your legs sans fairings. 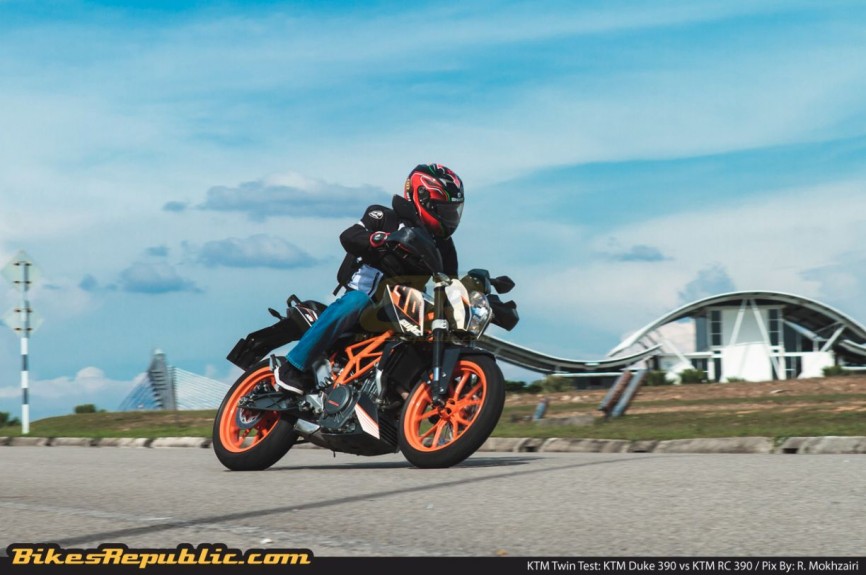 Besides that, this is one Learner-friendly bike after all, boasting a taut and compliant suspension setup for a decently comfortable ride. Newbies would be glad to know that it is fairly easy to modulate the Duke 390’s ABS-equipped single disc brakes front and aft. And, unlike the supersport-bodied RC390 twin, the Duke 390 is less of chore to ride should you adopt it as a daily commuter.

If the inaugural KTM 390 Duke Battle Malaysia held throughout last year has taught us anything, the Duke 390 is no slouch when in the right hands of a race rider. If anything, that combination of the seemingly neutral riding position, taut and compliant suspension, and that thumpy single-cylinder mill’s torque-rich nature of the Duke 390 is something many riders would appreciate as it stands as the perfect starter base to hone one’s riding skills further. 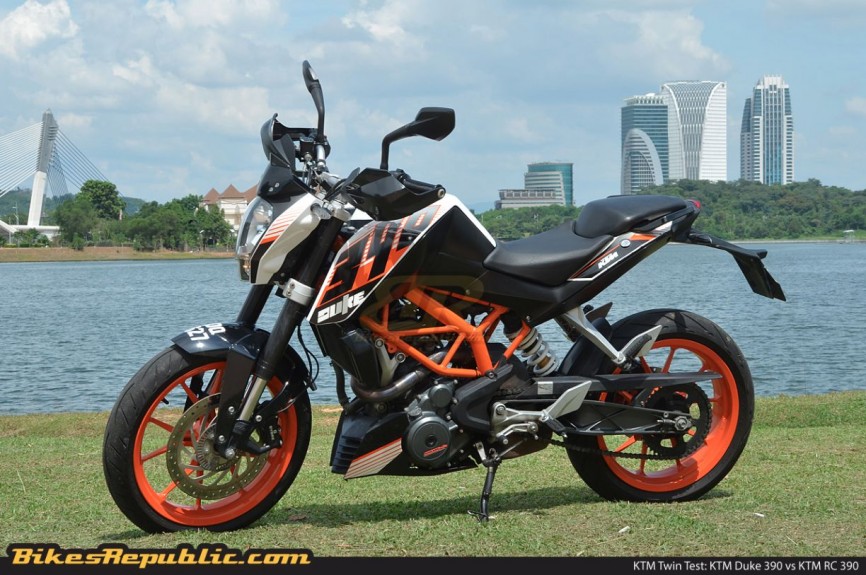 Overall, it isn’t a bad naked in its own right, sporting slightly better performance and abilities as compared to a similarly priced twin-cylinder 250cc Japanese-made naked rival. However, if you looking for all-out speed and performance, the Duke 390 naked simply won’t cut it. Literally. This is where the Duke’s sport-bodied twin, the RC 390, comes into its own prime. 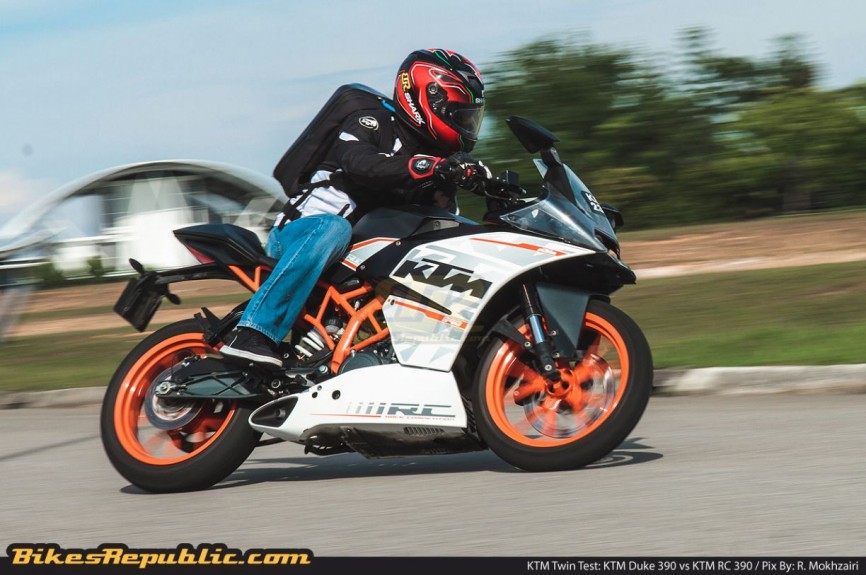 RC 390
The RC-series is relatively new to our market, having been launched sometime late last year. Like the Duke, it can be had in RC 200 or RC 390 forms, sporting the same 199.5cc and 373.2cc single-cylinder powertrains found in the Duke 200 and Duke 390 respectively. In this case, our RC 390 shares a similar powertrain package as the Duke 390 naked. 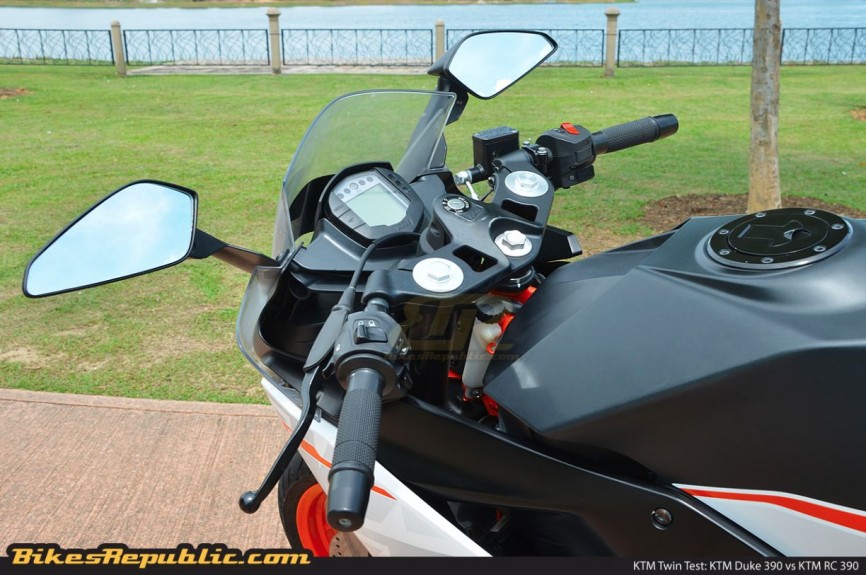 However, unlike the Duke 390, the sport-bodied RC 390 boasts a stylish fairing design, coupled with a pair of twin projector headlamps up front, plus LED daytime running lights and tail lamp. The difference between the 390-series Duke and RC are pretty stark, especially when you take note of the different front suspension’s angle, taller seat, slimmer profile, and the unmistakable sport-style handlebars and footpeg position. 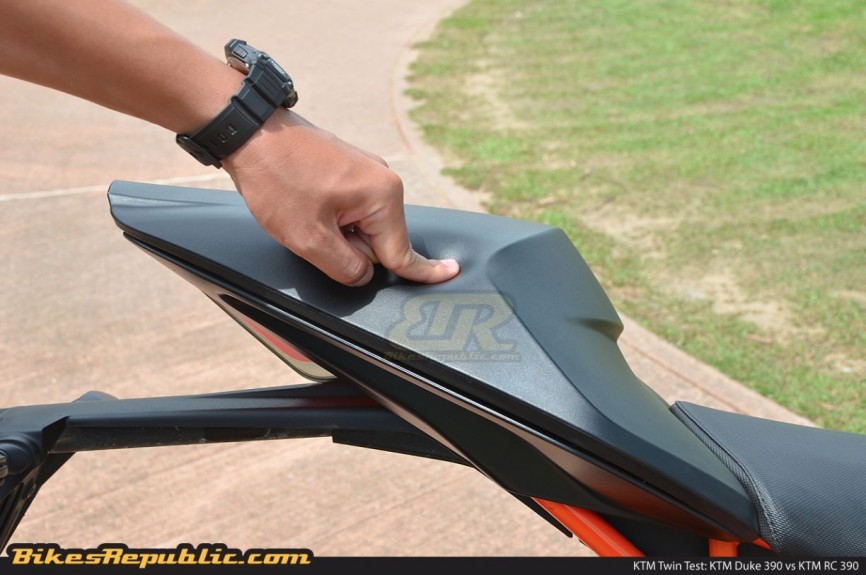 If you thought the Duke 390 was already quick to begin with, then the RC 390 takes things a few notches higher thanks to its faired body design being more slippery when cutting the air. The sport-style riding position does mean that one needs to beef up with upper body strength and support should you wish to commute daily with it.

Daily commute astride the RC 390 isn’t impossible really, but it is something we’d highly not recommend because of its raised seat height of 820mm, the harder spring and dampers, not to mention the apparent amount of vibration coming through the footpegs and seat. Instead, the RC 390 literally lives up to the Austrian brand’s “Ready To Race” motto, and comes into its prime when unleashed out on the open roads and twisty B-roads. 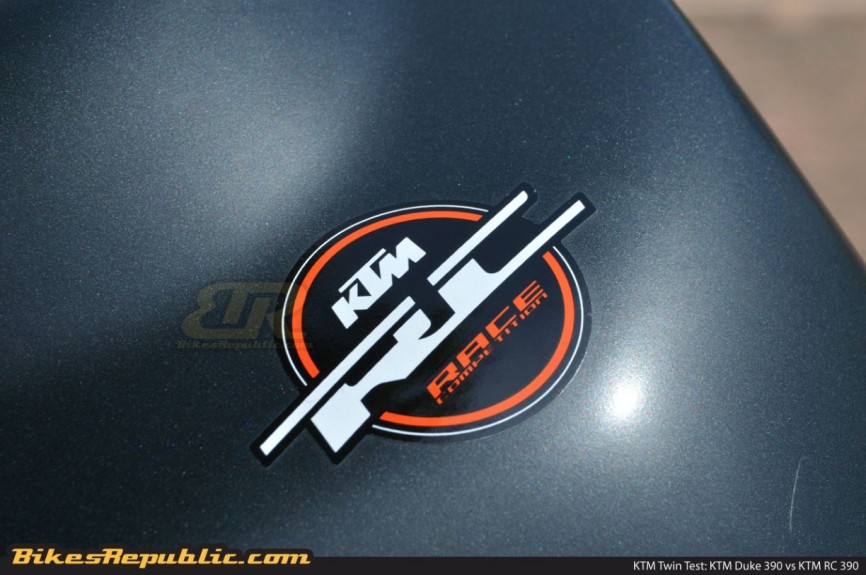 In a sense, the RC390 feels pretty much like a track-ready bike. In RC 390 form, the Duke 390’s qualities as an agile and nimble handling bike its sharpened further, with this RC 390 feeling a lot more chuck-able in the bends. In all honestly, this is one bike that begs you to clip each and every corner apex it meets with your knee ¬¬– it really is a lean, mean, orange cornering machine. If you’ve always wanted a starter track bike for the weekends, then this is it really. 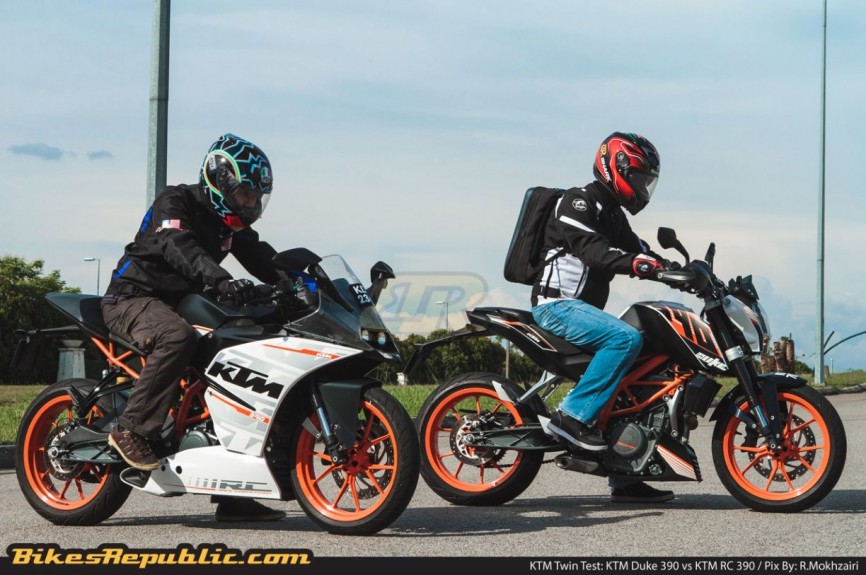 The only other issue to deal with here besides the less comfortable sport-style riding position is again that embarrassing soundtrack of the under-swept exhaust silencer.

Verdict
Both bikes meet their respective purposes brilliantly, making choosing between the two even harder really. But, if you preferred an easier ride for daily urban commutes without loosing out on power, then the Duke 390 naked is the one to have. But if you don’t mind the slight back pain every once in a while for something fast and extremely nimble in the bends, then the RC 390 will satisfy your needs to knee-down at every corner it meets. 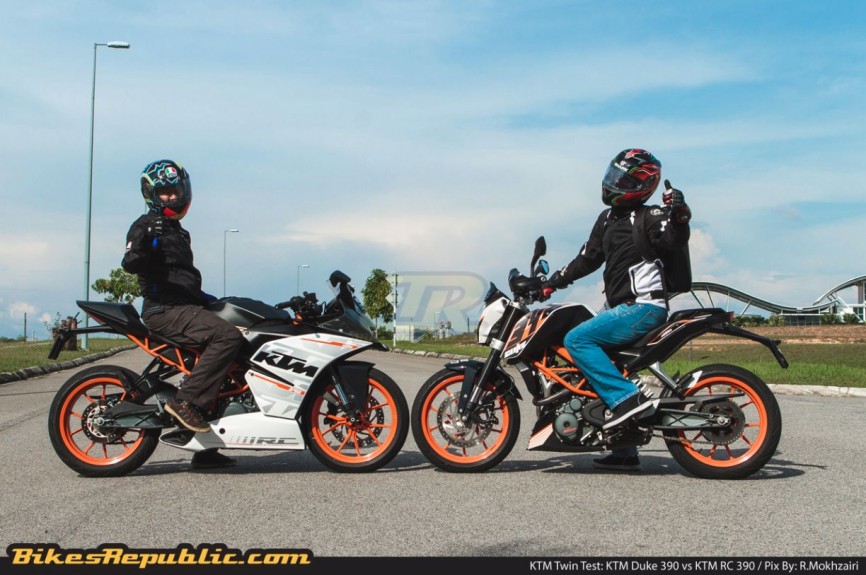 Check out our extensive gallery below, or visit the official BikesRepublic.com Facebook page to see more photos from out KTM Duke 390 vs KTM RC 390 twin test.

Also, don’t forget to check out what our colleague at MotoMalaya.net has to say about the RC 390. 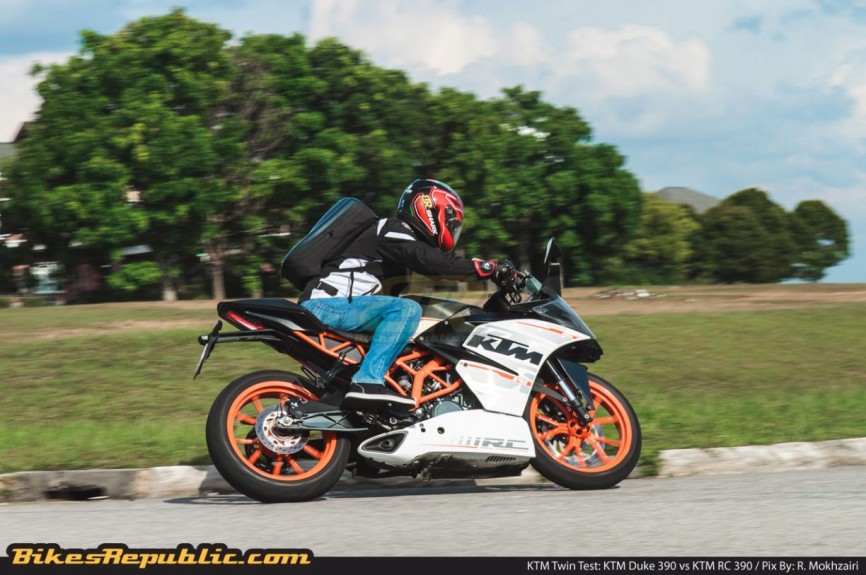 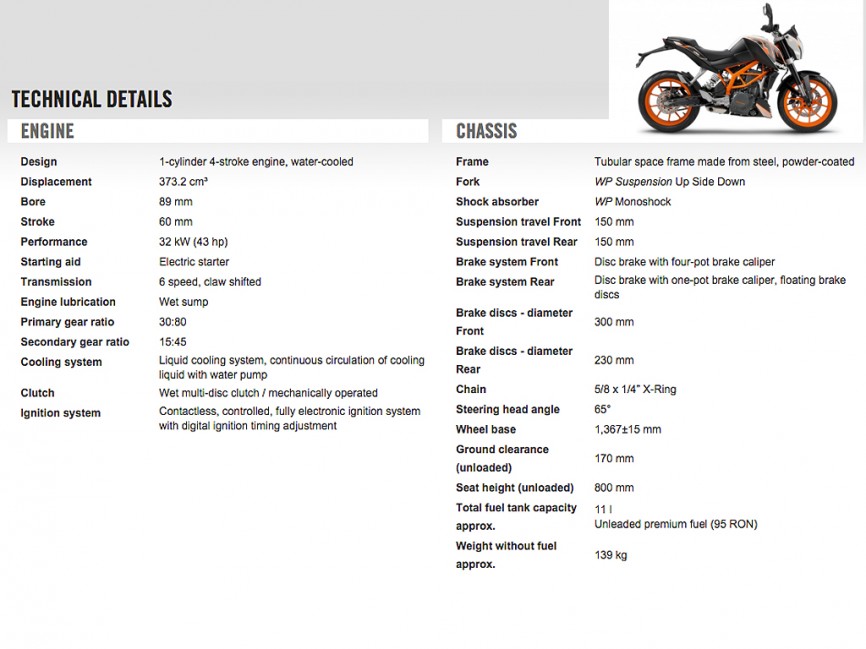