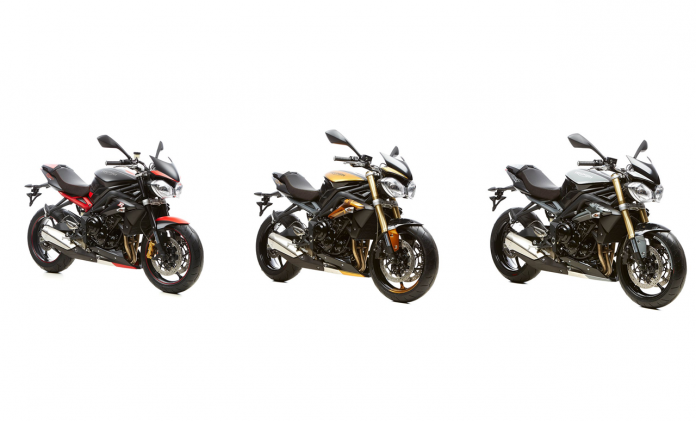 Like it sibling the Speed Triple, the Triumph Street Triple series has garnered quite the acclaim in just a few short years. This year, the cult favourite middleweight streetfighter celebrates its 10th anniversary and House Hinckley is celebrating it with three special variants.

As you can guess, the Triumph Speed Triple R Dark is based off the racy R version. Its special paint scheme is aligned with Triumph’s previous Dark specials while additional bits like the bellypan, flyscreen and cowl are standard fitments from the factory.

Both the Street Triple Gold and Grey versions, on the other hand, are based off the regular Street Triple instead. Their names are self-explanatory whereby the Gold features a gold-black two-tone scheme whilst the Grey comes dressed in a tastier grey-black dual-tone scheme.

Additionally, all three specials come brimmed with alcantara seats. Adding more zing to the Gold and Grey versions though is a set of colour-matched Union Jack graphics donned on the bikini fairings plus colour-matched wheels too.

Triumph will produce just 50 units of each livery special scheme, and all will feature its series number placed on the top of the fuel tank. Triumph plans to release the Triumph Street Triple R Dark special in the UK starting 1st Oct whilst the Gold and Grey will come later in mid-October.

To refresh your memory, the Triumph Street Triple first debuted towards the end of 2007. It was slotted below the manic Speed Triple model and featured a segment defining and Triumph signature 675cc triple-cylinder powerplant that offers 105hp and 69.1Nm of torque in its current form.