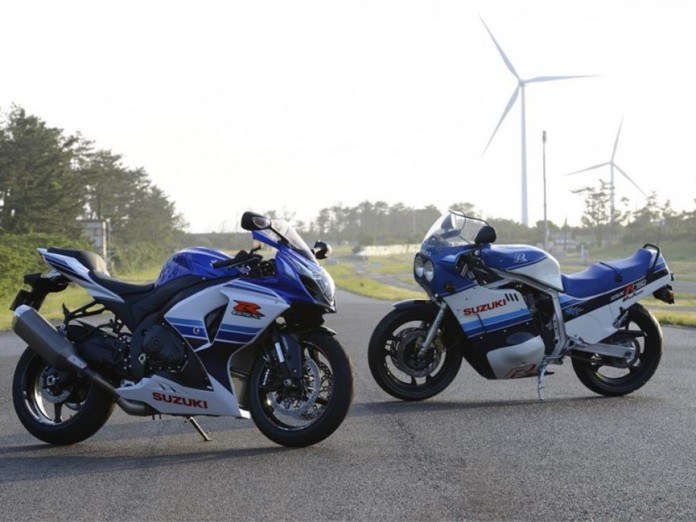 2015 is a very special year for Suzuki as one of its most popular models – the GSX-R range, celebrates its 30th anniversary. Unveiled in 1975, the GSX-R was very successful in the racing scene, thanks to riders like the legendary Kevin Schwantz.

Thanks to all the success and fame in the MotoGP scene, the GSX-R gained a massive following worldwide. It is said that there are more than a million GSX-R owners at the moment in the world.

So, in order to celebrate this milestone event, Suzuki unveiled a 30th Anniversary edition of the GSX-R1000 superbike at the German MotoGP event last week. The main highlight about the special edition model is that it features the same paint scheme as the original 1985 750cc model.

The blue and white paintjob was also run in the weekend’s German MotoGP race on the factory racing bikes of Aleix Espargarò and Maverick Viñales. There are no mechanical changes to the bike but the new colours are a tribute to the original GSX-R750 machine that kick-started the now famous GSX-R name.

According to Suzuki, the bike will be a full production machine and will go on sale globally from November.

The Suzuki GS series was Suzuki Motor Corporation’s first full range of 4-stroke road bikes, launched in 1976 in 750cc guise; which then expanded to include smaller GS550, GS1000, GS125 and GS1200SS models over the years. However, it was the 750 and 1000cc models that drove development on the race track and led-to the development of a new breed of motorcycle; the GSX-R.