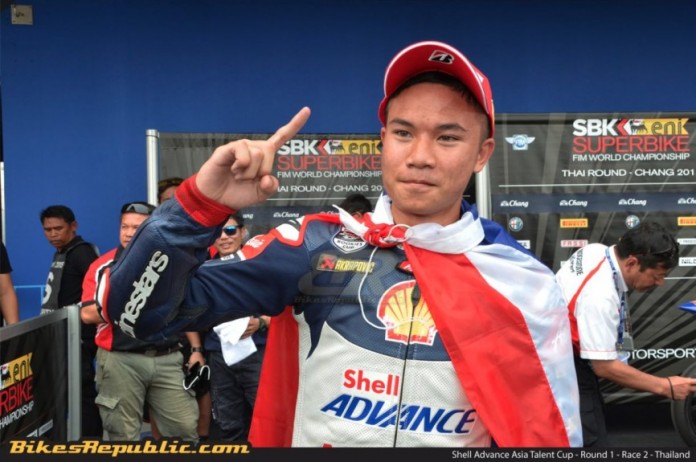 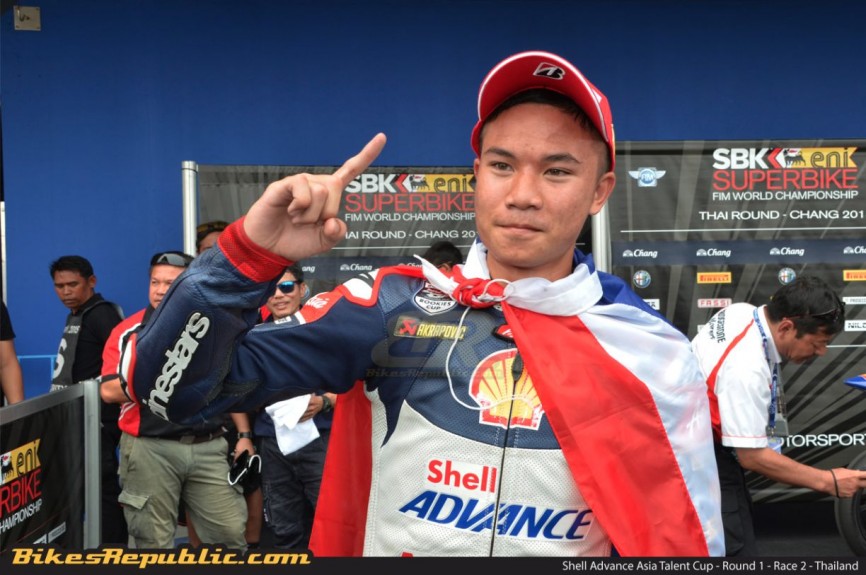 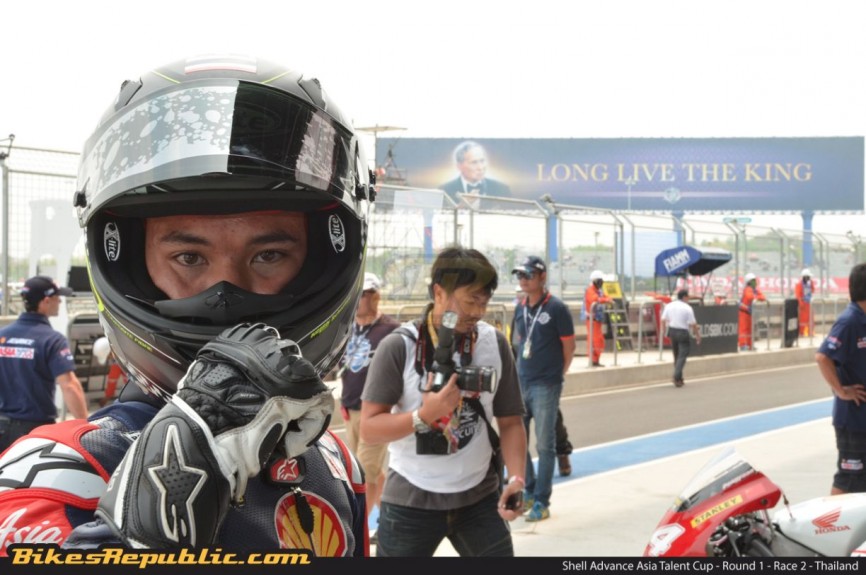 Once again, local Thai riders led by Nakarin ‘Chip’ Atiratphuvapat seized the home ground initiative today in Race 2 of the Shell Advance Asia Talent Cup 2015’s season opening race weekend. The 16-lap race saw yet another six-way battle for the race win from start to finish, much to the delight of fans in attendance here in the Chang International Circuit, Buriram, Thailand. 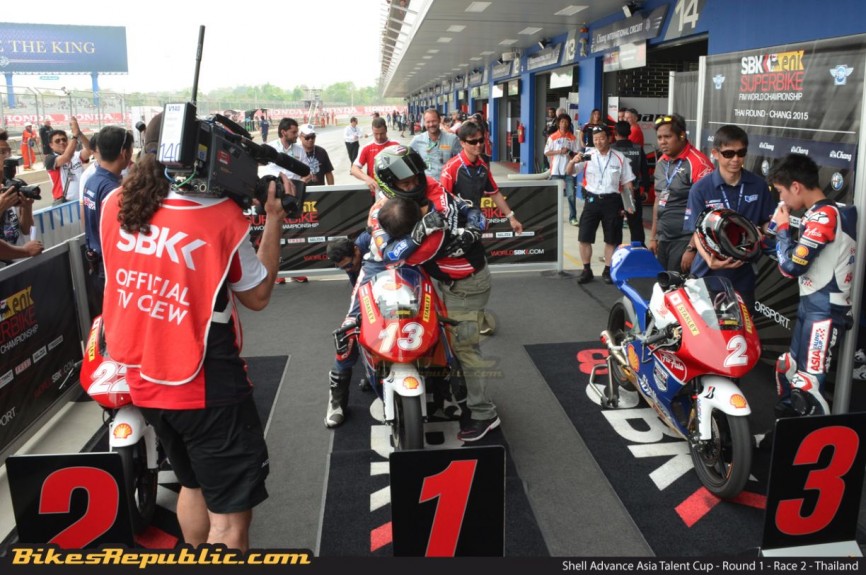 Vindication came for Nakarin ‘Chip’ today following his missed opportunity in Race 1 yesterday. The Thai youngster had a tough battle on his hands as he had to fend off the relentless charges from the top three Japanese riders – Ayumu Sasaki, Kazuki Masaki, and Takuma Kunimine – and the top two Malaysians that included Adam Norrodin and pole-sitter Helmi Azman. Also in the mix here were the two Indonesians Andi Izdihar and Gerry Salim. 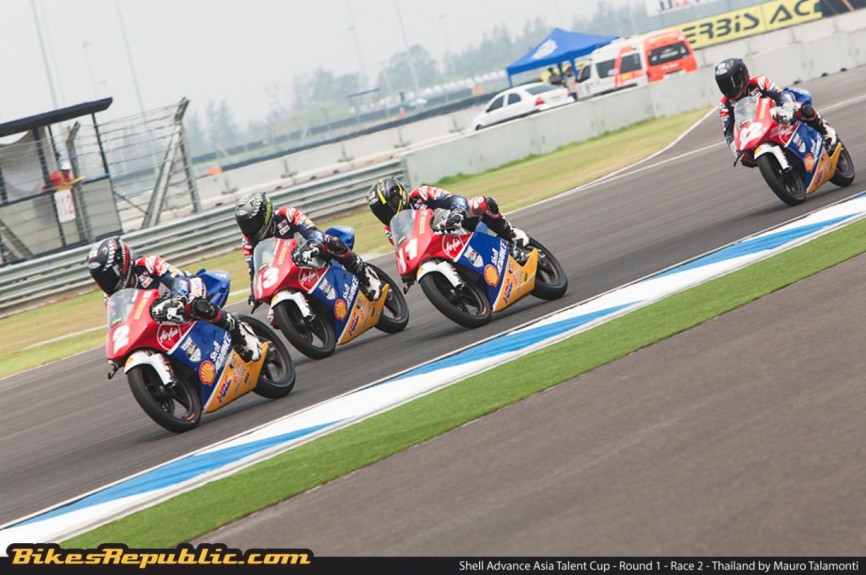 Drama ensued on Lap 12 when Adam Norrodin and local Race 1 winner Somkiat Chantra collided, resulting with the latter Thai rider’s dramatic high-side and subsequent retirement. As a result, Adam had to be content with his point-scoring finish in fourteenth place – a real shame as both he and Helmi fought hard in the lead pack’s nine-way battle for the lead. 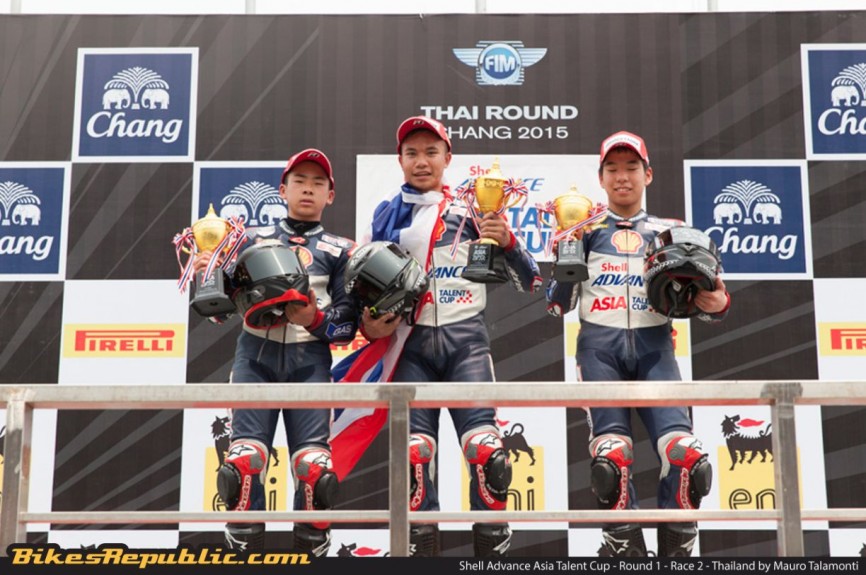 Somkiat and Adam’s late-stage collision inadvertently created a gap, allowing Nakarin ‘Chip’ and Ayumu Sasaki to pull away from the pack, creating a dramatic battle that lasted right down to the last corner on the last lap. Nakarin ‘Chip’ eventually triumphed, with Sasaki coming in a very close second place with a gap of just 0.117 seconds. The series’ rookie Masaki, who was just 0.702 seconds behind Nakarin ‘Chip’, again proved his worth and talent after claiming the final podium spot. 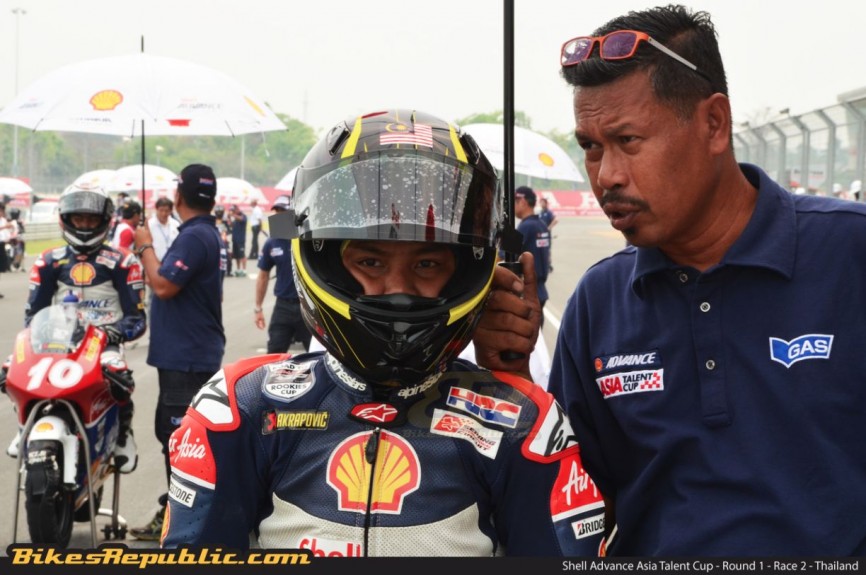 Unfortunately, pole-sitting Malaysian rider Helmi Azman was on the losing end of the aforementioned gap, forcing him to settle with his sixth place finish after battling with fourth-placed Indonesian Andi Izdihar, fifth-placed Takuma Kunimine, and seventh-placed Indonesian Gerry Salim. Nevertheless, Helmi’s pace all weekend is exceptional to say the least, a vast improvement over his performance last season. 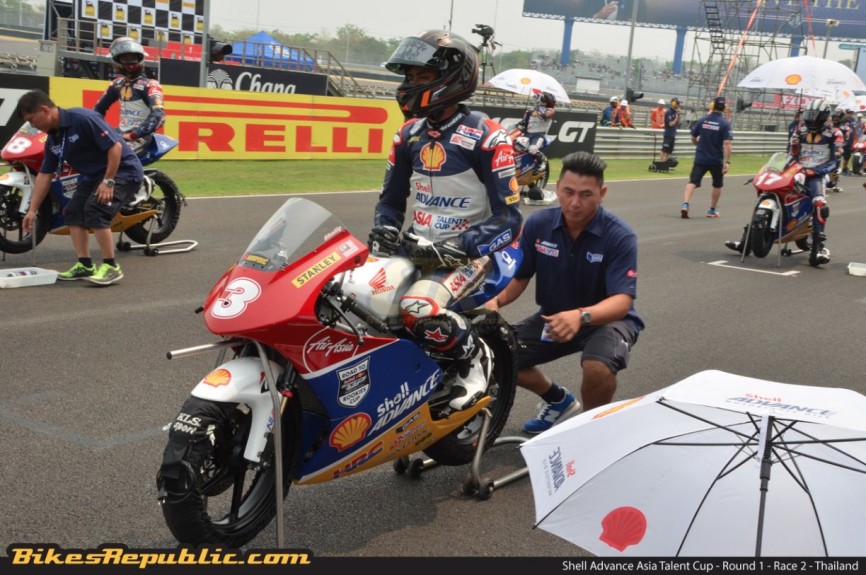 Further down the order comes Shafiq Rasol. As previously reported, the Malacca native has been struggling for pace all weekend here in Thailand, but yet another strong point-scoring finish in eighth place keeps his hopes for the championship alive. Just behind him in ninth was the towering Fakhrusy Rostam, with the Pasir Gudang native scoring some crucial points today, vindicating his DNF from yesterday’s Race 1. 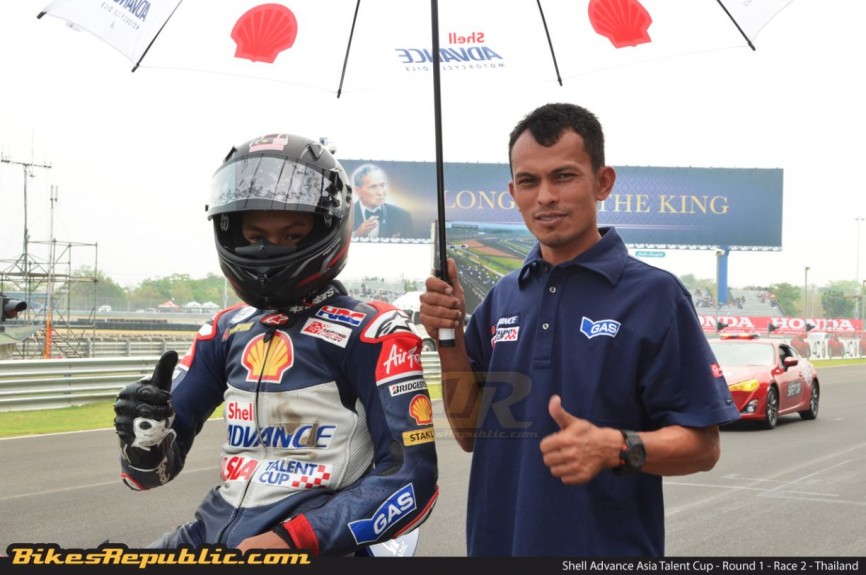 For Malaysian series rookie Azroy Anuar, the Kajang native once again finished the race, this time in a higher position of twelfth. Not a bad feat despite having to start from the tail-end of the grid following his crash in Qualifying, with the rookie gaining important experience and mileage in the hot seat of the Shell Advance Asia Talent Cup’s Honda NSF250R Moto3 race machine. 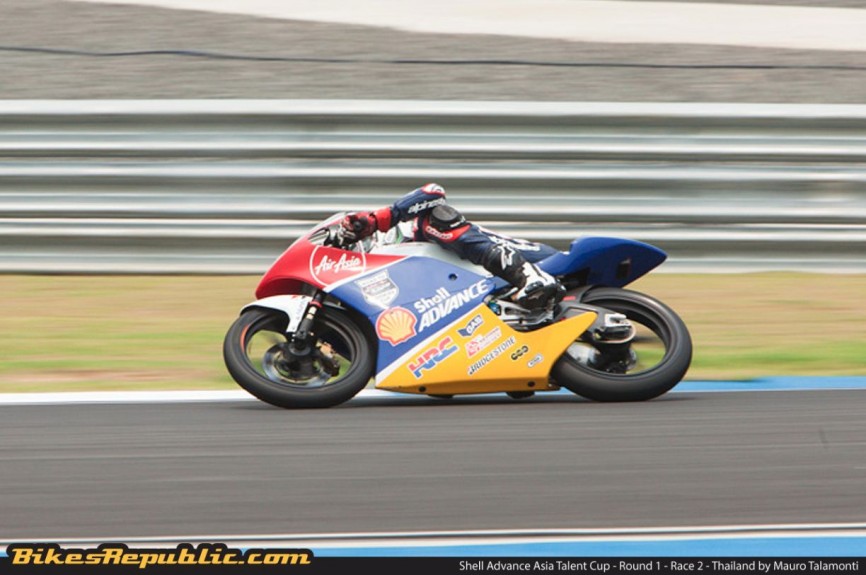 This also means that Team Malaysia may have a huge challenge ahead this season as compared to the previous season. A quick investigation on the ground revealed that the Thai and Indonesian riders have invested a lot of effort and resources for their riders including track time, competition experiences abroad, and the acquisition of the Honda NSF250R Moto3 machines for domestic competitions and training. This is perhaps an area that needs some attention in the Malaysian encampment. 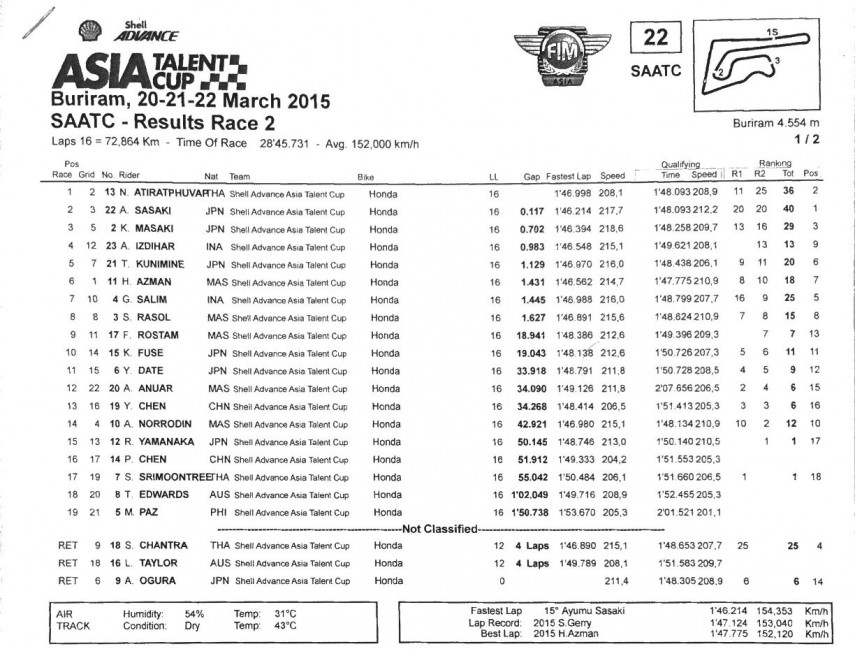 The weekend concludes here in Thailand, with clear indication that series riders hailing from the ASEAN nations – specifically Thailand, Indonesia, and Malaysia – showing equal pace and competitiveness as their revered Japanese counterparts. Round 2 of the Shell Advance Asia Talent Cup 2015 is scheduled to take place in less than a week’s time in Losail, Qatar, where it will be held as the support event to the season-opening MotoGP 2015. 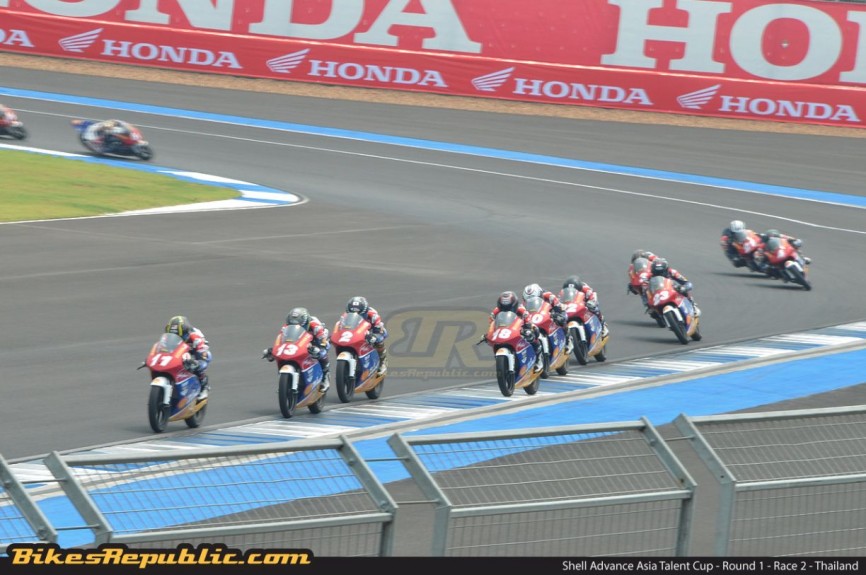 In the meantime, check out our extensive photo gallery below and on our official Facebook page for more exclusive images as well. (Additional trackside photos courtesy of Mauro Talamonti / Crunch Communication PR for Shell Advance Asia Talent Cup) 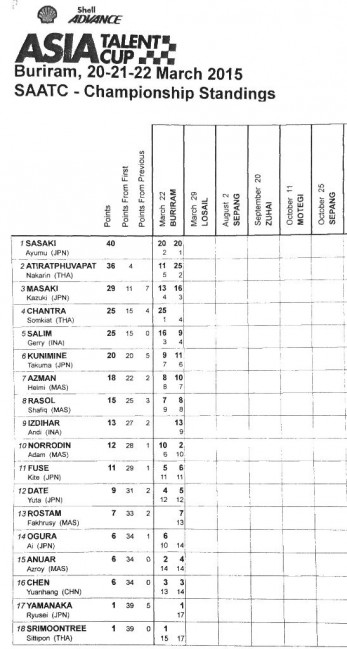