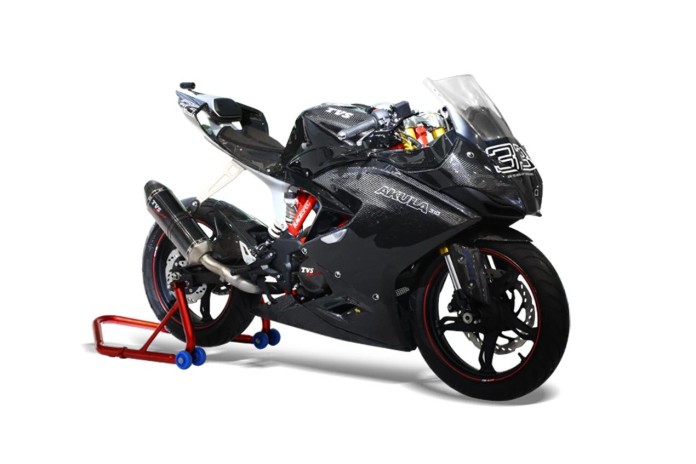 Rumour finally became a reality during the recent Auto Expo in New Delhi, India when the TVS Akula 310 concept bike was revealed. This is essentially the sport-bodied sibling of the new BMW G310R naked built by Indian manufacturer TVS – the German brand’s India-based partner.

This racing concept was displayed during the annual show boasting a race bike stance complete with paddock stands holding it up. It wears a full carbon fibre body that’s unpainted to complement the bike’s stylish overall design. In case you were wondering, ‘Akula’ translates as ‘shark’ in the Russian language. We won’t argue that the design matches the name indeed.

Details are scarce, but reliable sources have confirmed that this concept was developed based off the BMW G310R naked (pictured above). The TVS Akula 310 does however benefit with a redesigned chassis subframe, but the rest including the suspension and brakes appear unchanged from the naked bike it underpins.

Both the German bike and its not-so-distant Indian cousin do share the same 313cc single-cylinder heart, but the Indian marque is claiming that the concept’s tuned mill thumps out more power. TVS declined to reveal exact figures but as a reminder, the G310R boasts output figures of 34hp and 27.9Nm of peak torque.

Also lifted from the BMW G310R is the TVS 310 Akula’s exhaust system. TVS have only added a newly designed silencer unit to match up with the Akula’s sharp and sporty looks as a fully faired sport bike.

Bolstering this concept race bike are several race-derived components such as a force-red air box, aerodynamic fairing fins, as well as an inbuilt gyro camera. Besides the carbon fibre body, weight is reduced further with the presence of several lightweight parts, but TVS hasn’t shed any light on which just yet.

Citing India-based sources, reports online also indicate that the TVS Akula 310 will head for production in India sometime later this year. What remains unanswered though is the question whether TVS’ German partners would use the concept as a basis to develop own rendition of a sport-bodied G310R.