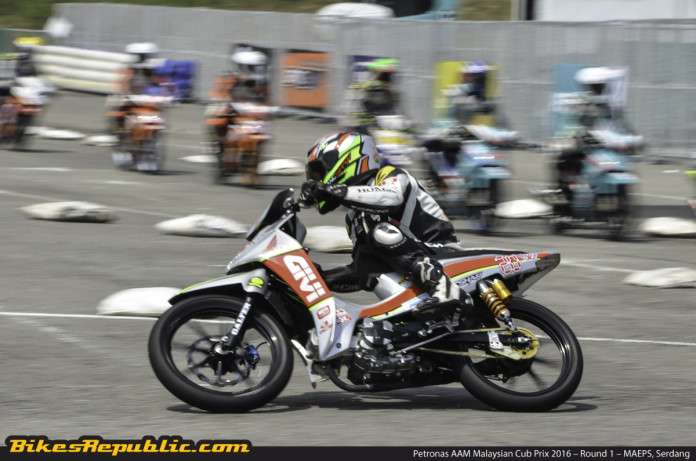 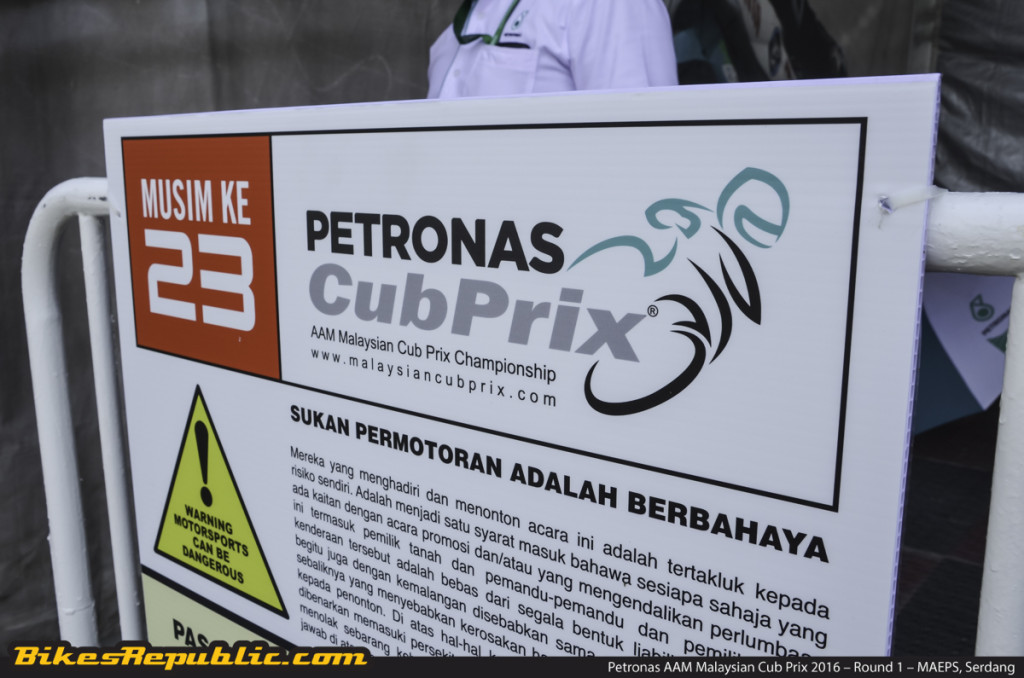 The two-day soiree of speed kick-started with Free Practice and Timed Practice sessions held on Saturday, followed by Sunday’s volley of Qualifying shootouts and the Final sprint races. Besides the three main categories – Wira, CP115 and CP130 – fans were also treated with more close racing action from the supporting classes too that included the Petronas Sprinta Pro-Am challenge, followed by the Honda Wave Alpha Challenge and Yamaha Petronas Super Series one-make series. 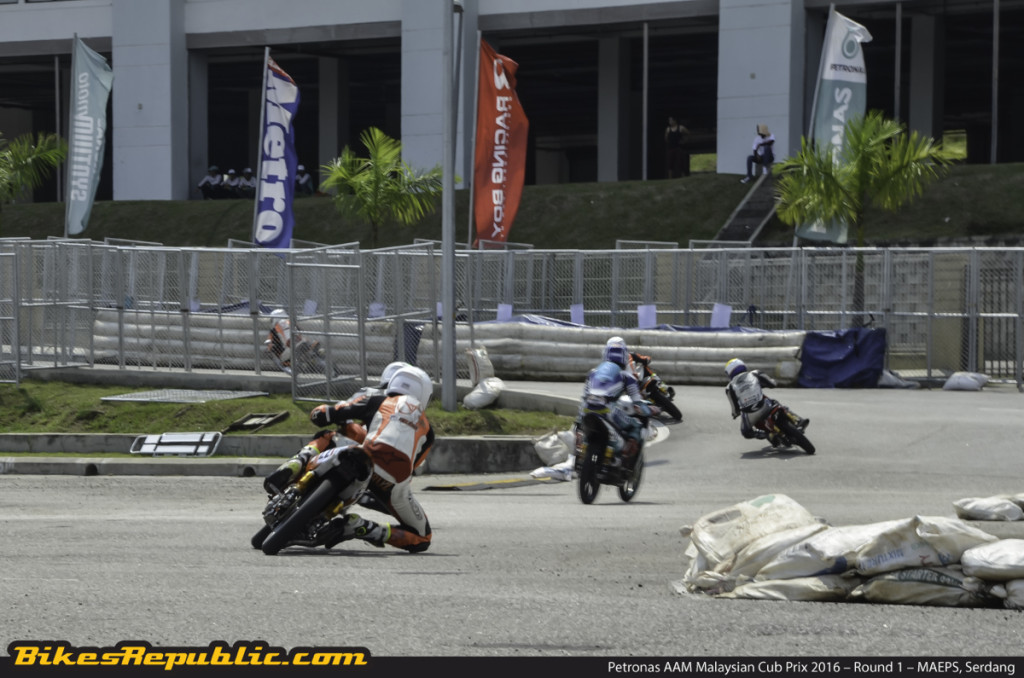 The second half of Sunday saw a total of six races being held for all six categories being contested. Suffice to say, fans were treated with plenty of thrills, spills and close racing action as riders fought for glory around the specially constructed street course of MAEPS. Here’s our round up from Round 1 of the 2016 Petronas AAM Malaysian Cub Prix Championship. 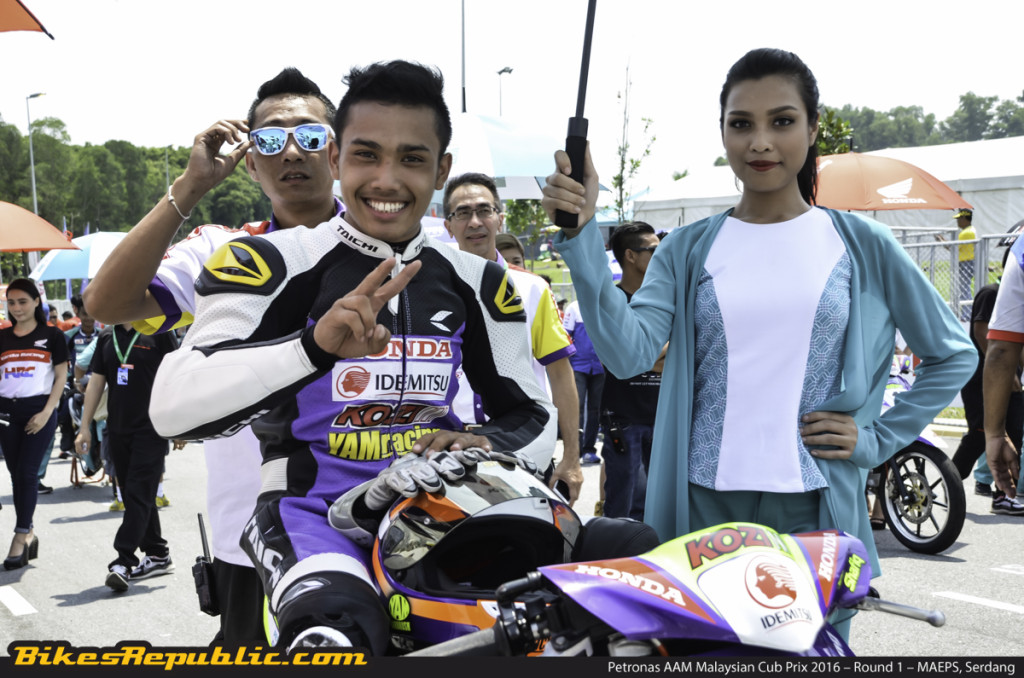 The first major contest of the day, the Wira category, lasted for 12 laps just after the scheduled break. Winning the race was one familiar face for us, that being former Asia Talent Cup rider Shafiq Ezzariq.

Having secured his pole position from the Qualifying shootout earlier, Shafiq was able to put on a masterclass display of his race craft, leading the 12-lap race from start to finish to clinch his first victory of the season. 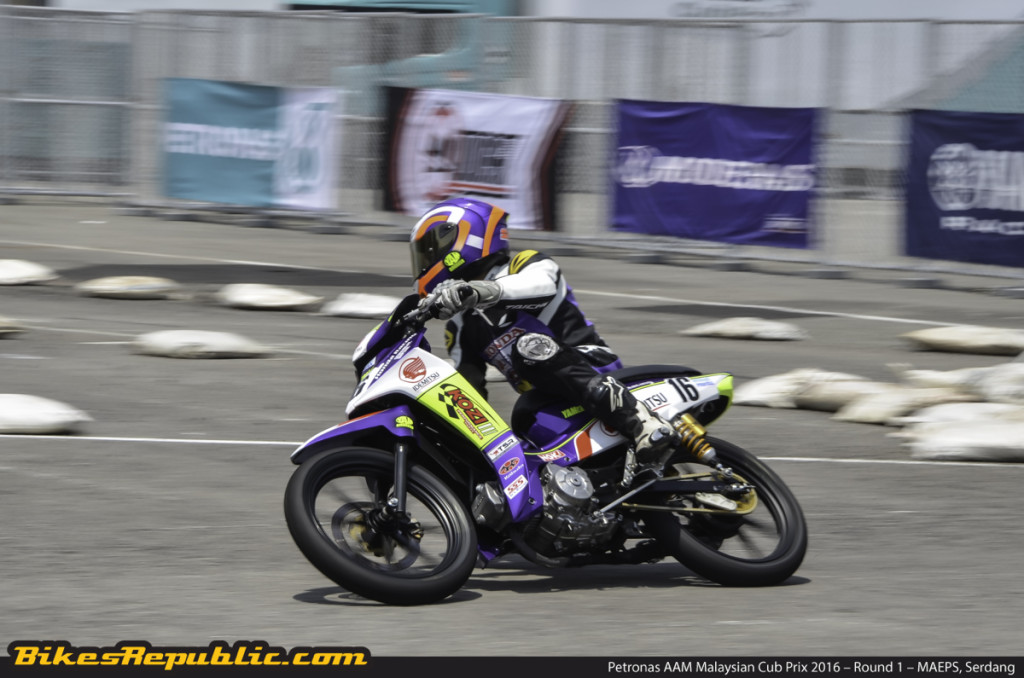 With his race win, Shafiq also kicked off the season in strongly for the Idemitsu Kozi Yam Honda Racing team as well. Joining him on the podium was second place finisher Md Qhuwarismi Md Nasir from the Weststar Motorsport team, followed by privateer rider S. Alif Nazirul S. Ismail who finished third. 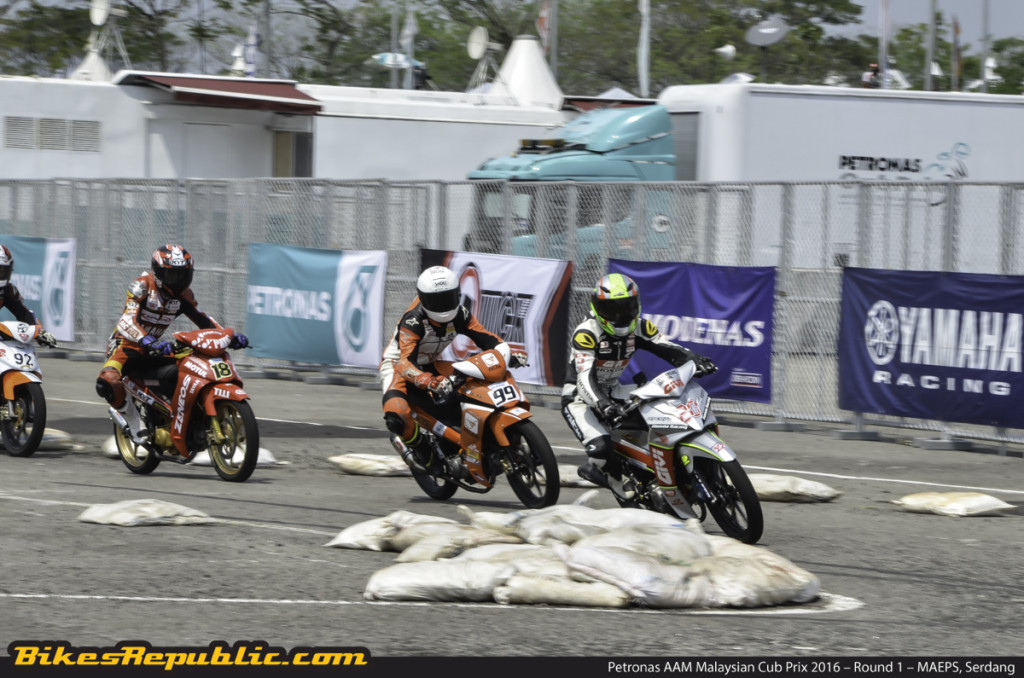 Next up came the second premier class race, the CP115 category. Upset came early in the opening stages as pole sitter Azroy Anuar from the Givi Honda Yuzy Racing fell whilst being pressured by the other front-row starters. Azroy, who is also a former Asia Talent Cup Moto3 rider, could only watch in dismay as Tengku Amirul Haffirudin astride the Motul Zeneos Yamaha YY Pang stormed ahead to claim the race win.

Nevertheless, Tengku Amirul’s race win didn’t come cheap either as he had to fend off the charges from the Felda PB Racing Team and its rider Md Fareez Afeez. The battle between the two was something that kept fans on the edge of their seats for several laps. 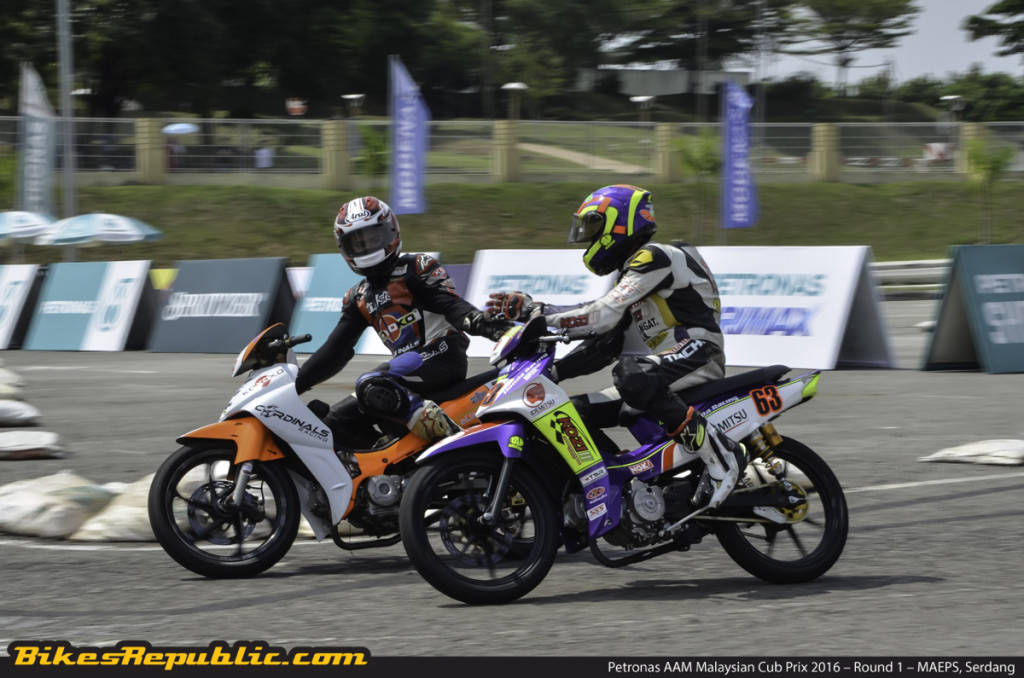 Tengku Amirul eventually won the 15-lap sprint race, which no doubt saw him collecting another race trophy for the legendary YY Pang-led outfit. Fareez, on the other hand, could only settle for second whilst Md Harith Farhan Baharin from the Idemitsu Kozi Yam Honda Racing claimed the final podium spot. 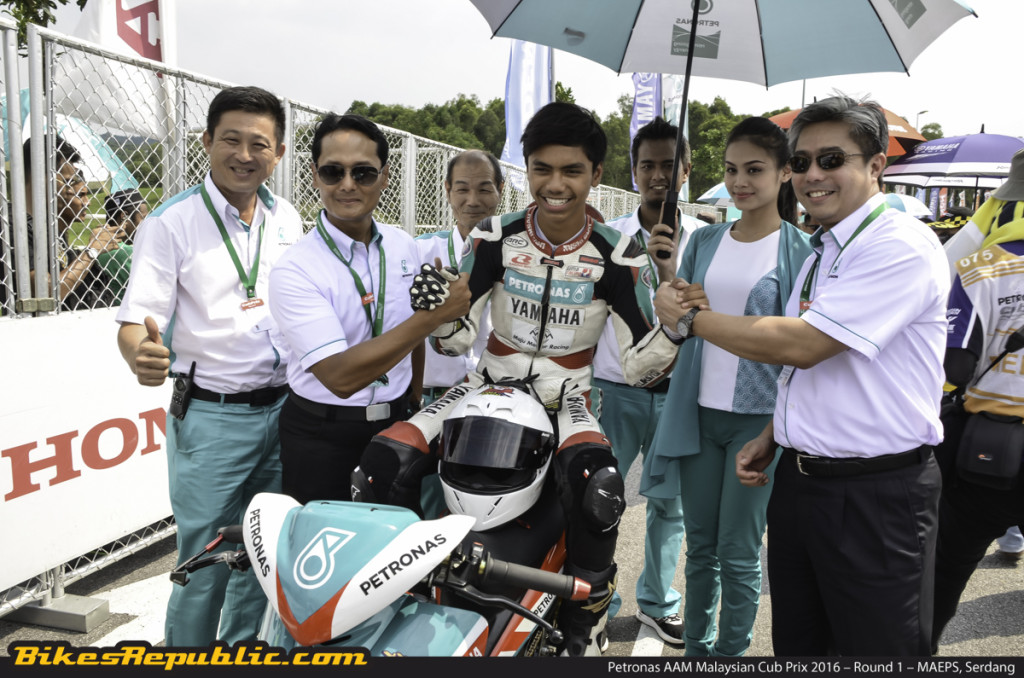 In the premier CP130 category, it was a fairy tale ending for youngster and crowd favourite Kasma Daniel Kasmayudin. The Petronas Yamaha Maju Motor rider was a hot pick to take the season by storm, and he did just that during the season-opener in MAEPS. 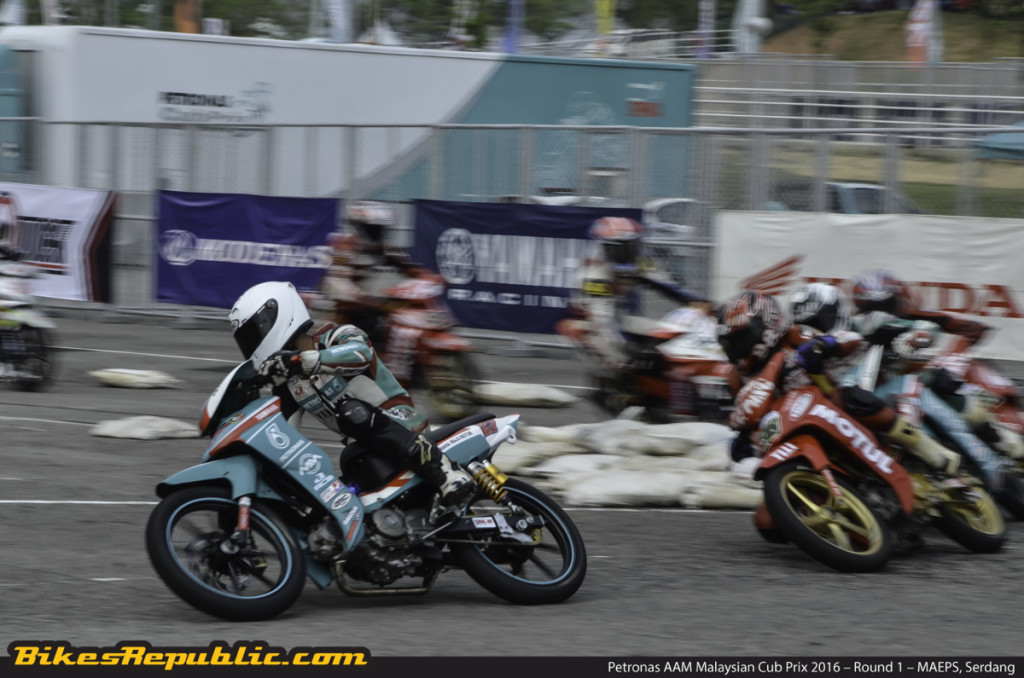 Kasma Daniel’s Sunday began well after he scored pole position from the Superpole qualifying shootout held earlier. Eager to defend his title, Kasma Daniel showed that his talent was a force to be reckon with, despite his tender age of just 16 years old. Kasma also put on a masterclass of his racecraft by converting his pole position start with a race win.

By the time the chequered flag was waved at the end of the 18-lap race, Kasma had already set a huge gap away from the other two podium finishers. With the way things look here, Kasma look’s set to enjoy another runaway success this season with the Petronas Yamaha Maju Motor team.

Joining Kasma on the podium was his Petronas Yamaha Maju teammate Ahmad Fazli Sham in second, followed by Givi Honda Yuzy Racing rider Zaqhwan Zaidi who scored a well deserved third place finish. Zaqhwan’s performance was phenomenal to say the least as he bounced back from a poor starting position. 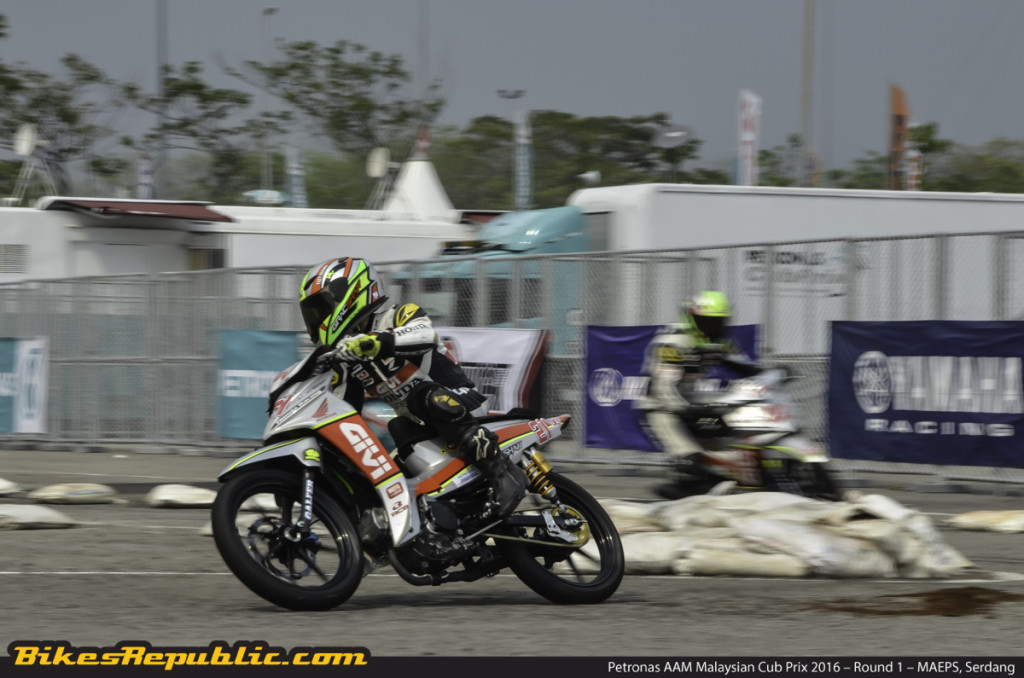