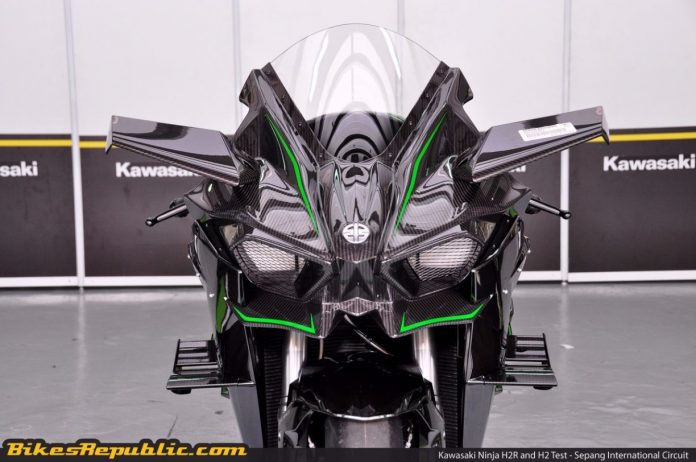 We list down nine of the fastest Kawasaki bikes ever made since 1973. 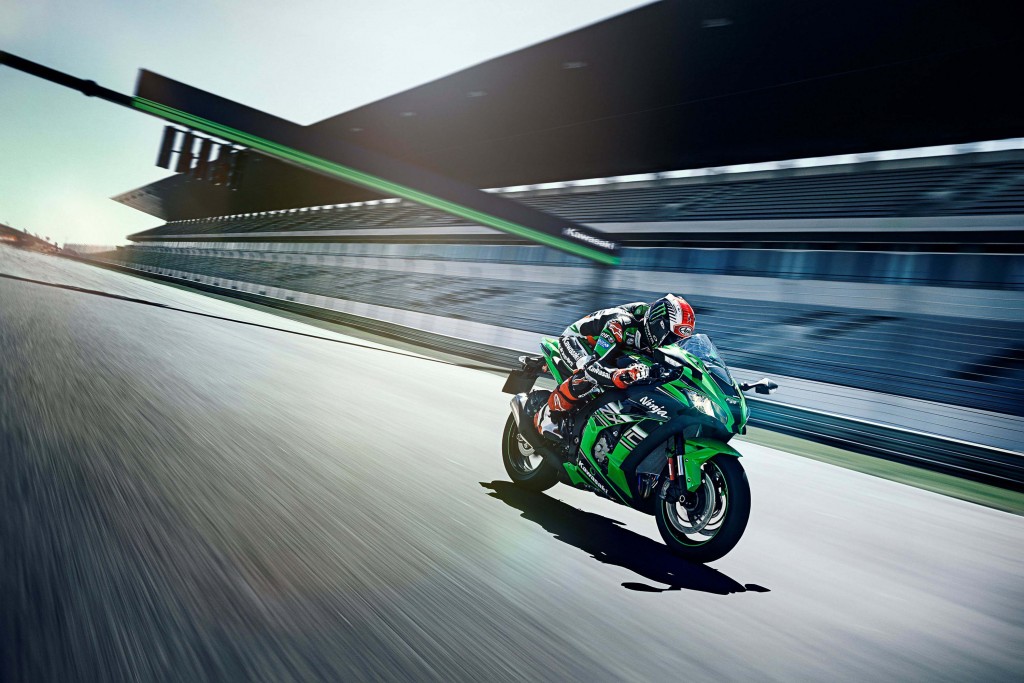 For as long as it has existed, Japanese bike maker Kawasaki has given the world some of the fastest bikes ever.

This week, we take a look back at Team Green’s history in churning out the world’s fastest bikes leading up to its two supercharged flagship beasts of today – the Ninja H2 and Ninja H2R.

With that, here are nine of fastest Kawasaki bikes of all time.

We start our list with the first bike to garner Kawasaki a speed title, the Z1. This particular bike started the Kawasaki Z-series of naked and street bikes in fact. It also helped popularise the Universal Japanese Motorcycle (UJM) genre alongside the rivalling Honda CB750.

The Kawasaki Z1 arrived with an air-cooled DOHC 903cc in-line four-cylinder engine encased in a full duplex cradle chassis, generating 81hp and 73.5Nm of torque. Those numbers may not seem much but when coupled with a claimed 246kg laden weight figure, it allowed the Z1 to hit a claimed top speed of 212km/h.

The Z1 was indeed quick for its time, but the bike will forever be remembered as the genesis of the Kawasaki Z-series instead of the first properly fast Kawasaki. It would take Team Green more than a decade before it reclaimed the fastest production bike title again.

Kawasaki reclaimed its speed mantle in the mid-1980s and it began with this, the Kawasaki GPZ900R. Also known as the ZX900A or Ninja 900 depending on market, it is thought to be one of the earliest models that formed the brand’s Ninja family of sport-bodied bikes.

The GPZ900R featured a liquid-cooled DOHC 908cc in-line four-cylinder engine that had varied outputs depending on market. The most powerful of which boasted 115hp and 85.4Nm of peak torque that easily propelled its claimed laden weight of 248kg up to a top speed between 243km/h to 254km/h. The GPZ900R stood as Kawasaki’s fastest road bike until its successor, the Tomcat ZX-10, arrived later in 1988.

Furthermore, the bike also attained cultural significance and fame when it was featured in the action flick Top Gun. The film’s lead character Maverick, played by then rising star Tom Cruise, favoured the hot seat of a GPZ900R when not flying at Mach 2 in an F-14 Tomcat fighter jet.

Having already established itself as a maker of fast bikes with the GPZ900R, Kawasaki then rolled out the successor to that in 1988 called the Tomcat ZX-10. Also part of the Ninja family, it featured Kawasaki’s first perimeter aluminium frame chassis that has since become a key feature in most of its bikes.

More importantly though, Kawasaki improved on the GPZ900R’s engine further with new semi-downdraft CV carburettors, lighter pistons, bigger valves and an altered compression ratio. The result was a liquid-cooled DOHC 997cc in-line four-cylinder that developed 135hp and 102Nm of torque.

Besides its new chassis and a more powerful engine, Kawasaki also spent a great deal of effort at developing the Tomcat ZX-10’s aerodynamic fairing design. The result was a bike that hit a top speed of 266km/h, and one that claimed the title as the world’s fastest production bike in 1988.

Throughout the 1990s, a speed war erupted amongst the leading Japanese bike makers until a gentlemen’s agreement with European rivals took affect in 1999 and ended this. At the start of this fight for Kawasaki was the Ninja ZX-11 sport-tourer, which was also known as the ZZR1100.

As the successor to the Tomcat ZX-10, the Ninja ZX-11 took things a few steps higher in the 1990s. Power came from a liquid-cooled DOHC 1,052cc in-line four-cylinder powerplant that offered a claimed output of 145hp and 108.5Nm of torque whilst the bike had a claimed weight of 274kg.

The Ninja ZX-11 was capable of reaching a top speed of 283km/h when it was launched, standing as the fastest production bike of its time. Though it was beaten by the rivalling Honda CBR1100RR Super Blackbird in 1996 and later by the Suzuki GSX1300R Hayabusa in 1999, the Ninja ZX-11 remains very special as it took first blood for Kawasaki in the early stages of this speed war.

With a clear mission to beat rivals Honda and Suzuki, Kawasaki unveiled its Ninja ZX-12R model in 2000. Succeeding the previous Ninja ZX-11, the Ninja ZX-12R packed a bigger and more powerful engine to do the job at hand.

Power came from a 1,199cc in-line four-cylinder that featured a ram-air intake. It generated a whopping 178.5hp and 137Nm of torque to propel the bike’s claimed laden weight of 247kg. When it came out of the factory, Kawasaki claimed that the Ninja ZX-12R was capable of reaching a top speed of 300.9km/h.

A number of mild updates throughout its life kept the Ninja ZX-12R hot on the heels of the rivalling Suzuki GSX1300R Hayabusa until the Ninja ZX-14R replaced it in 2006. Crucially, much of what was pioneered in the ZX-12R would later be improved and reapplied in the succeeding ZX-14R model.

Unfortunately, the bike came out of the factory with an electronic speed limiter that capped things at 299km/h. Nevertheless, there are plenty of way to remove this limiter (i.e. after market ECUs and what not) and theoretically, the Ninja ZX-14R could hit speeds above 330km/h.

Moving away from heavyweight speed record missiles, Kawasaki is also known for making one of the planet’s fastest litre-class track weapons of all time with its Ninja ZX-10R model. 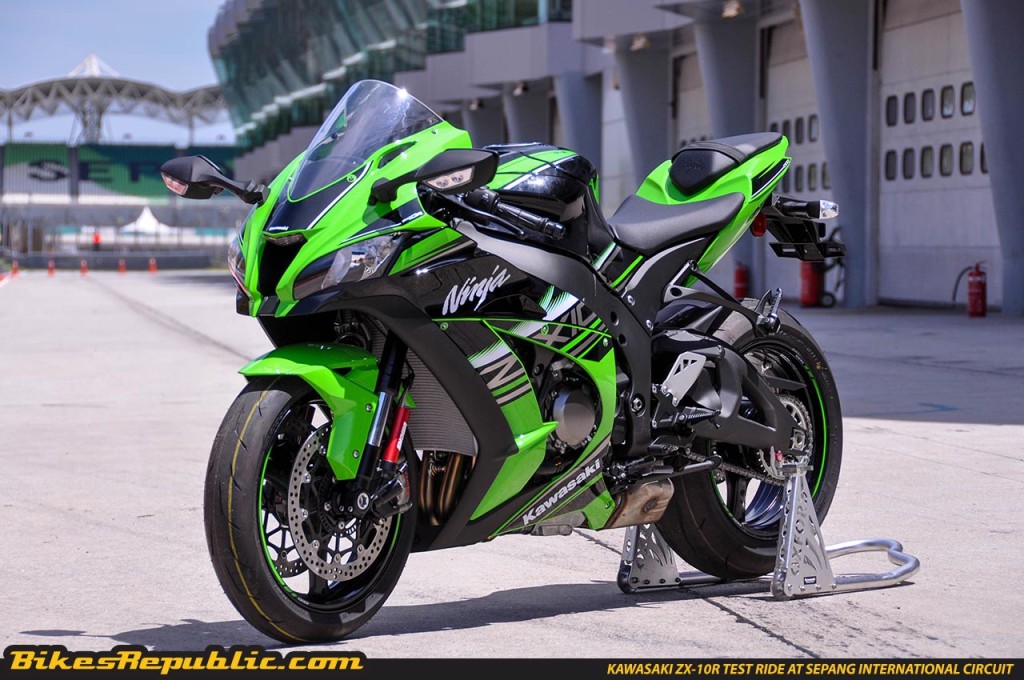 Since 2004, the Ninja ZX-10R has been a staple favourite for both trackday warriors and professional racers alike. Just like what we’ve said before, you can bet that each and every national-level racing worldwide will have a few Kawasaki ZX-10Rs competing in it.

The Ninja ZX-10R recently underwent a major update for 2016 where it was built and developed solely for the Kawasaki WSBK team and riders. The most crucial improvement here was its lightened crankshaft, allowing this 998cc in-line four-cylinder screamer to produce 197hp and 113.5Nm of torque. 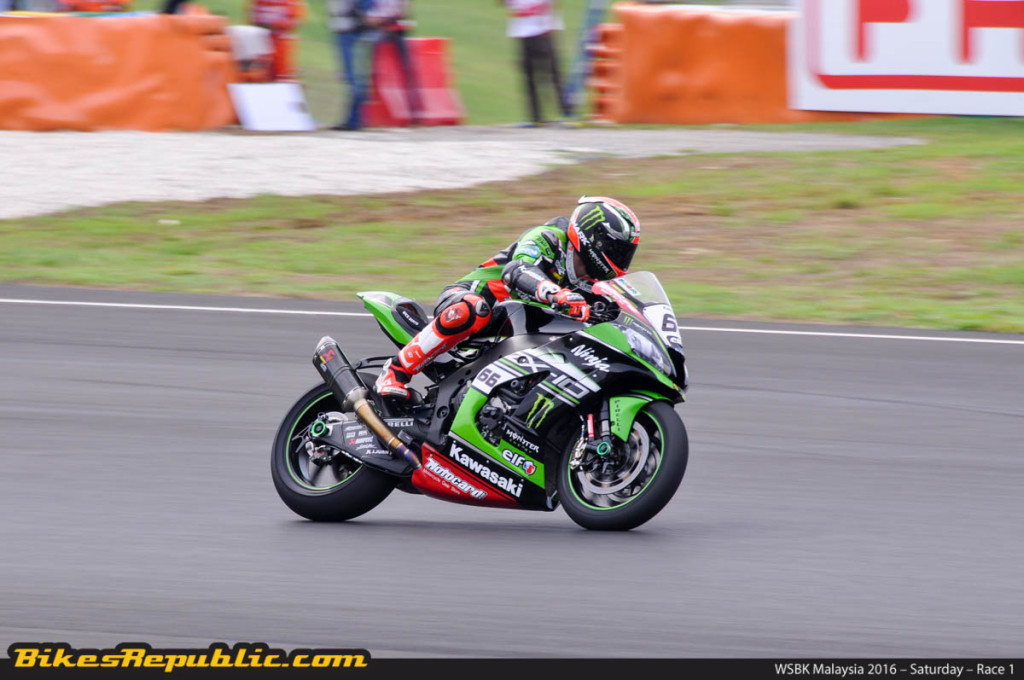 As far as litre-class track weapons go, the Kawasaki Ninja ZX-10R sits high up in the list alongside staunch rivals like the new Yamaha YZF-R1, Honda CBR1000RR Fireblade, as well as the Suzuki GSX-R1000. 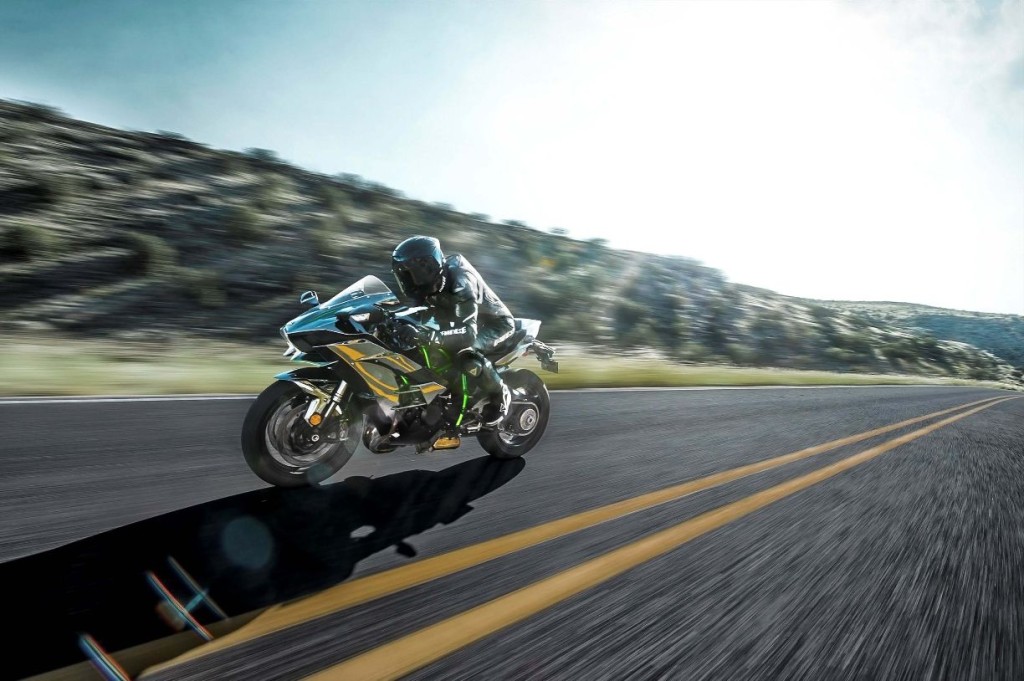 The next bike on our list is one of two flagship bikes that Kawasaki built purely for speed and nothing else – the Ninja H2. Unleashed in 2015, the Ninja H2 sees Kawasaki adopting its supercharging method, squeezing out every ounce of power from a DOHC 998cc in-line four-screamer based off the ZX-10R’s unit. 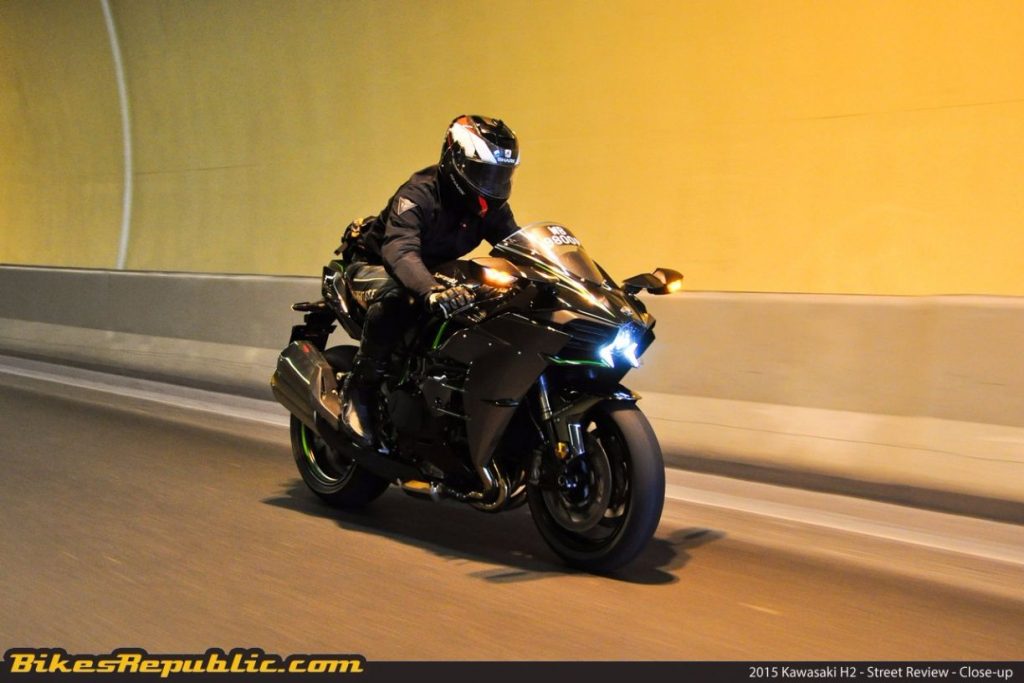 The street-legal Kawasaki Ninja H2 variant boasts 210hp with ram-air effect and 133.5Nm of torque. This, along with the H2’s claimed 238kg weight figure, means that the Ninja H2’s theoretical top speed is rated well over 332km/h.

This is perhaps the fastest thing on two-wheels that’s actually street-legal with lights and plates on. 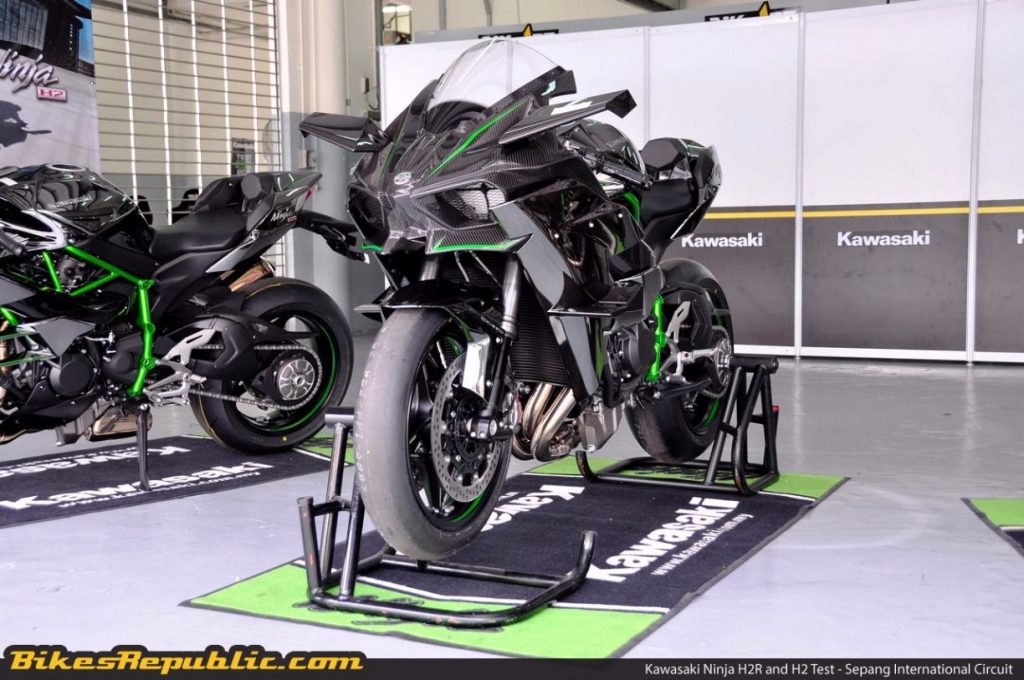 We saved the best for last and it is none other than the Ninja H2’s manic sibling the Ninja H2R. Released alongside the Ninja H2, the R version was created specifically for track use, explaining its radical aerodynamics and lack of street-legal ancillaries such as lights and plates. 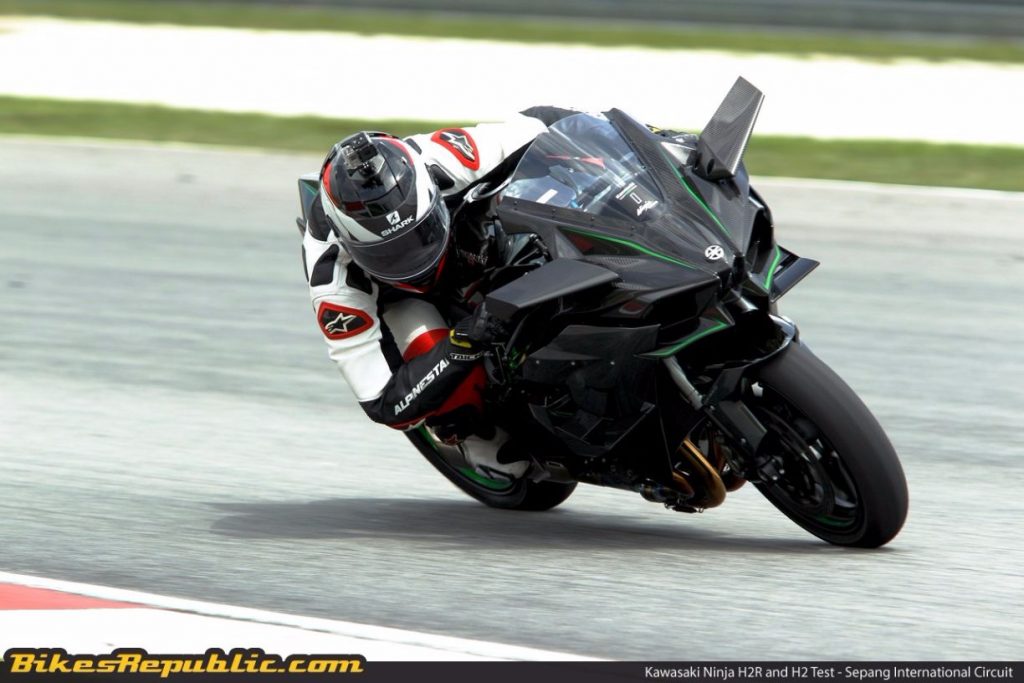 Kawasaki went to town at harnessing power from the H2R’s 998cc four-pot screamer. Besides cranking up the supercharger, the engine also used a vast array of lightweight and exotic materials, allowing it to develop a whopping 310hp with ram-air effect and peak torque of 156Nm.

For the longest time, many debated whether the Ninja H2R could actually hit its theoretical top speed of 400km/h. Previous attempts came close to it, but it took Turkish WSSP ace Kenan Sofuoglu and a 50km-long bridge empty of traffic to reach the magical 400km/h mark. 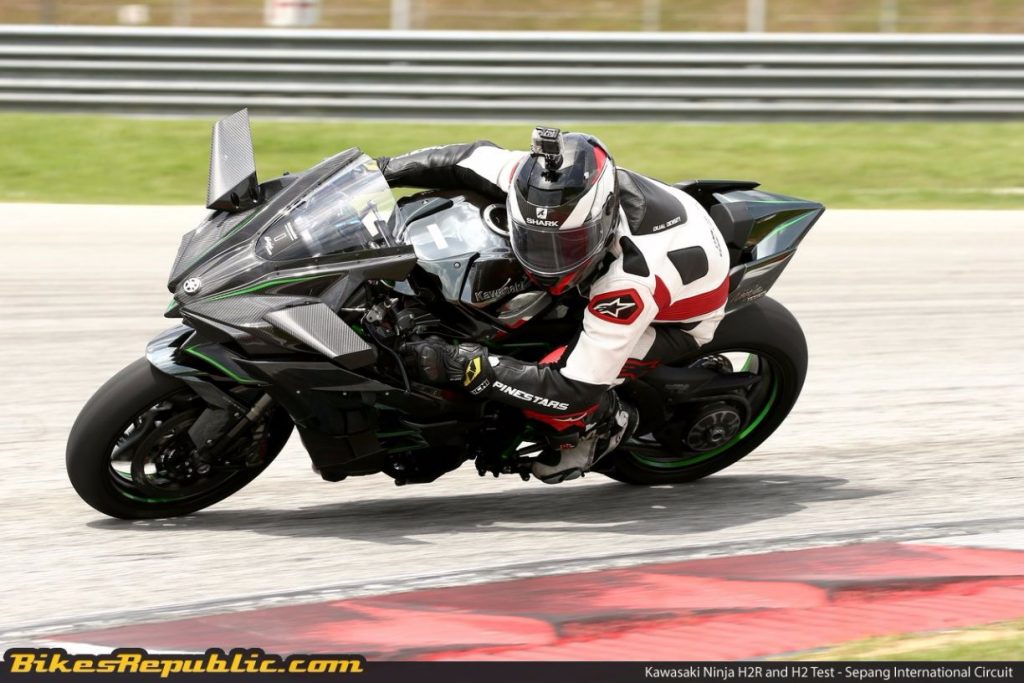 As far as production-based bikes go, nothing else comes close at eclipsing the Ninja H2R’s 400km/h top speed figure.