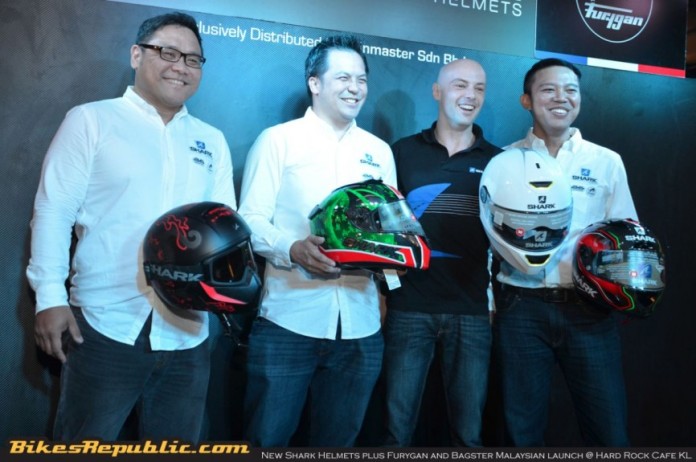 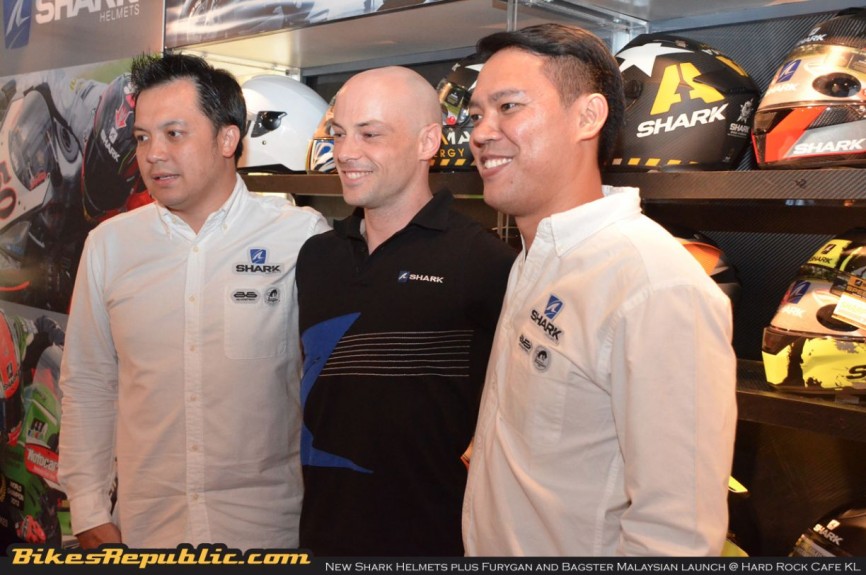 Earlier this evening, Malaysian distributor of Shark Helmets Winmaster Sdn Bhd held a special press launch and presentation at the Hard Rock Café Kuala Lumpur. Presented were the new 2015 range of Shark helmets, plus the introduction the Furygan and Bagster brands.

Present during the presentation were Winmaster Sdn Bhd’s General Manager Ron Tan, as well as Shark’s export manager François Berni. François gave a detailed presentation for both the Shark and Bagster brands for the invited press members present. Amongst other guests included selected dealers and personalities from the local two-wheeled scene. 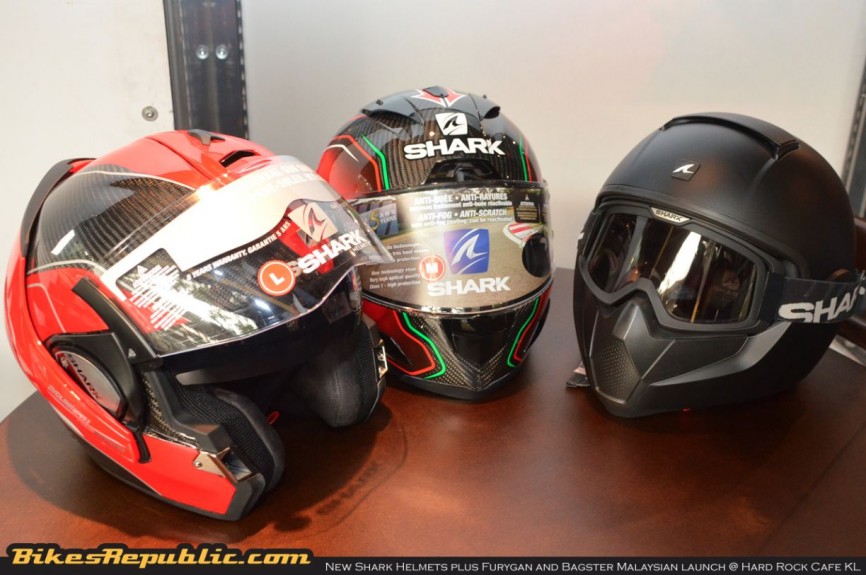 Winmaster Sdn Bhd were gracious enough to set up a special display booth, giving press members and guests present a closer first-hand look at the Shark brand’s new range of helmets for 2015. Though comprised of most of Shark’s current product line up with updated liveries and colours, there were several new additions as well. 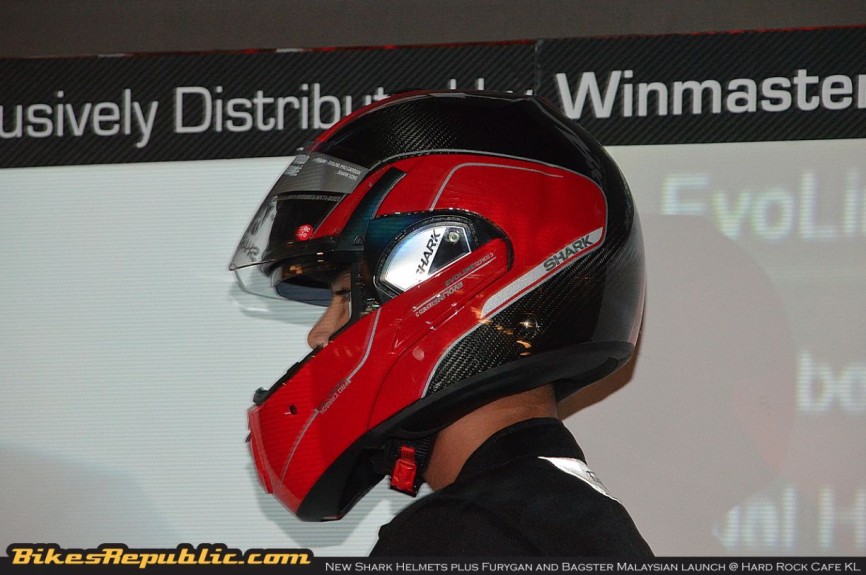 The first of which is the French brand’s EvoLine Pro Carbon modular series. Unlike most other modular helmets, the Shark EvoLine Pro Carbon’s lower protection assembly can be flipped fully to the back, essentially converting from a full-face into a half-face easily. 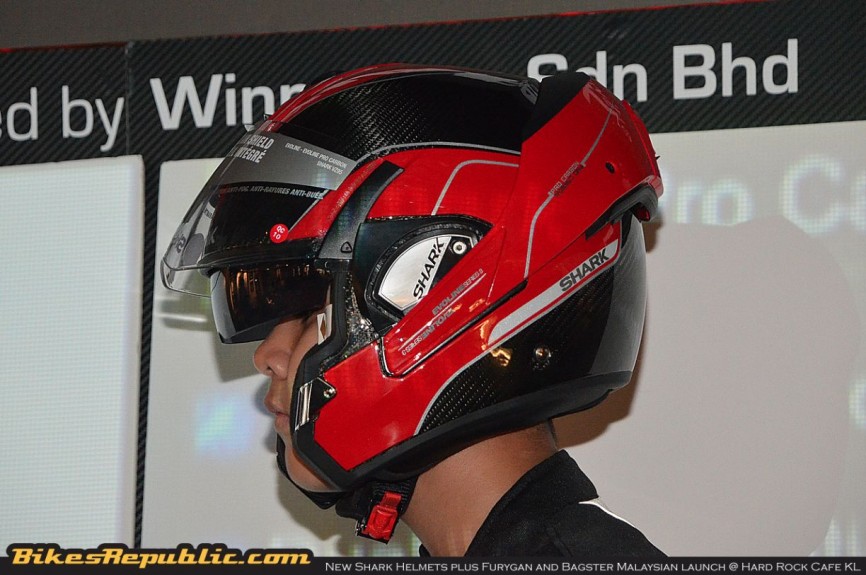 According to Fraçois, the EvoLine Pro Carbon was specially designed to have said feature. Even with the lower front sub-assembly fully flipped back, the helmet’s special design allows it to keep its overall optimal aerodynamic efficiency, and maintain the French brand’s renowned qualities for little air resistance. Furthermore, the new EvoLine Pro Carbon boasts a light weight of just 1,610 grams, and adopts a new interior lining made using Shark’s unique bamboo-based materials. 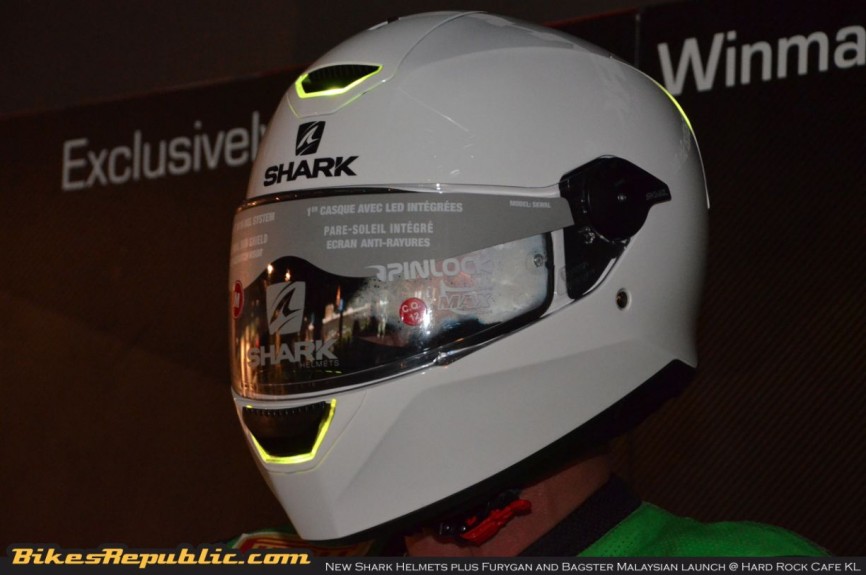 However, the highlight of the range, literally, was the brand’s new Skwal series. The Skwal’s most innovative feature has to be its integrated green LEDs adorned on the front fascia’s upper and lower air scoops, as well as the rear fascia’s air scoop exit nacelles. The integrated LED system was meant to increase a rider’s visibility further to other motorists. Also, François explained further that the colour green was chosen for its effectiveness for the human visual sensory to identify it. 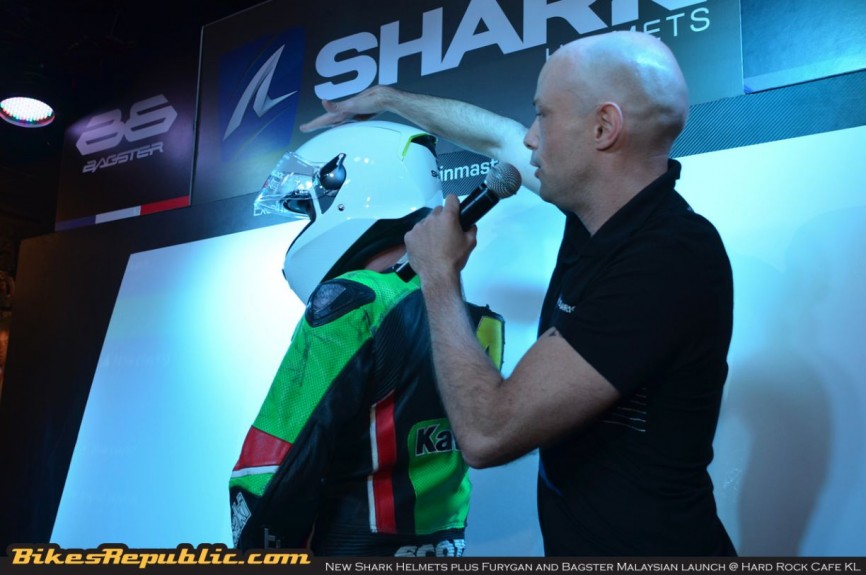 The unit presented by François happens to be one of only five known prototypes made by Shark. This should explain why it dons a plain white paint scheme as Shark is still finalising the Skwal range’s liveries and colour schemes. Though not available in the market just yet, the Skwal is scheduled for market introduction in the first or second quarter of next year. 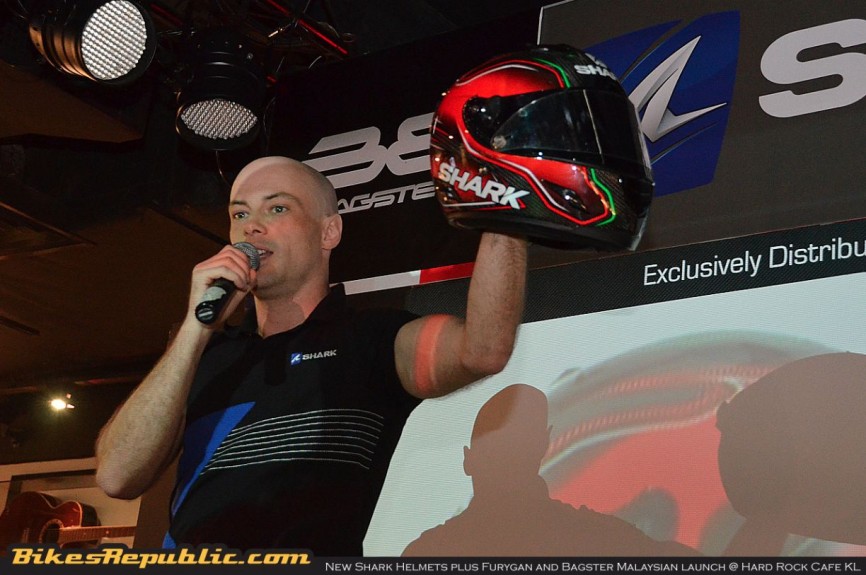 Also new for 2015 is the Shark Speed-R series2 range. Available in Carbon form as well, the full face is updated substantially for 2015, boasting optimised aerodynamics especially for naked bikes. The Speed-R series2 also boasts a lightened weight, with the regular version tipping the scales at just 1,450 grams whilst the Carbon version weighs in at just 1,370 grams. 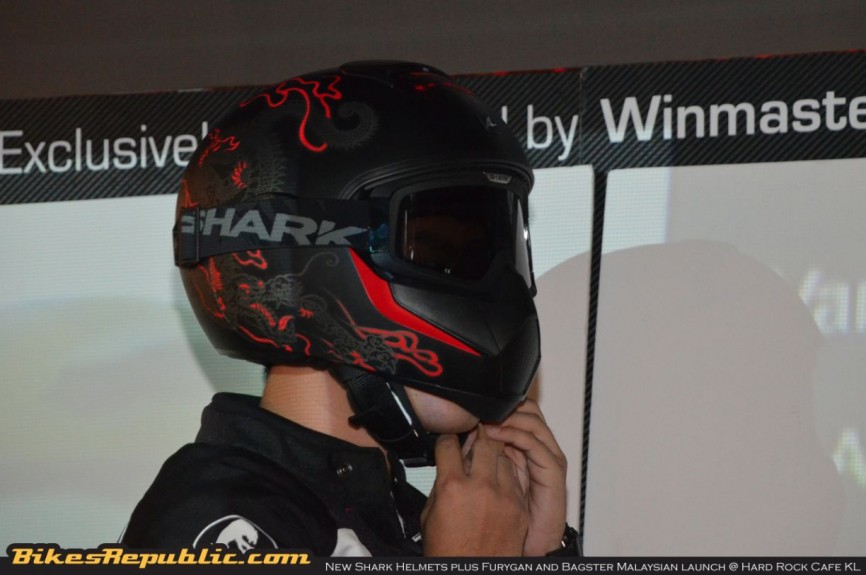 Finally came the brand’s new and updated Vancore series. Not only refreshed with new colours and liveries, the helmet shell itself received several upgrades with its aerodynamics. It also boasts Shark’s new bamboo-based fabrics lining its interior.

Despite its cool retro looks from the use of goggles, and apparent light weight of just 1,250 grams, the helmet does not compromise on its integrity and crash protection. Arguably, this is one of Shark’s most distinct and finest creations thus far, sporting good looks with unrivalled protection and comforts.

Except for the Skwal, most of the new 2015 range of Shark helmets presented earlier this evening are available for purchase with Winmaster Sdn Bhd and its partnering dealers nationwide. All Shark helmets will come with an unrivalled five-year warranty plan as well.

You can check out the full 2015 range of Shark helmets by visiting its official site: www.shark-helmets.com

Bagster is a brand that specialises itself in three areas, mainly creating a wide range of bike luggage accessories, custom seats, as well as aprons and muffs. Whilst our weather negates the need for aprons and muffs, it is a necessity for many urban bikers in cold climates such as Europe.

Bagster’s range of luggage components, on the other hand, is equally as rich and wide as its custom seats. The range includes items such as traditional and magnetic tank bags, soft saddle bags, as well as specially-designed backpacks for riders.

You can view Bagster’s full range of products by clicking over to its official site:
www.bagster.com/en/ 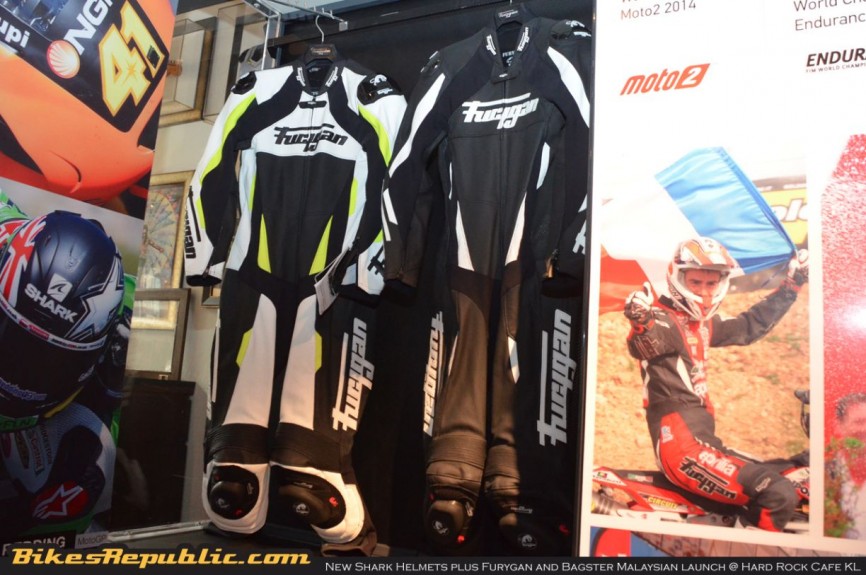 Whilst new to most in Asia, the Furygan name is in fact four-decades old. The French bikes apparels brand serves for both track and road riders with various types of protective gears. For the casual rider, the range includes jackets, riding pants, as well as full suits. Furygan also offers a specific range of products meant for race riders, which was presented during the event earlier this evening. 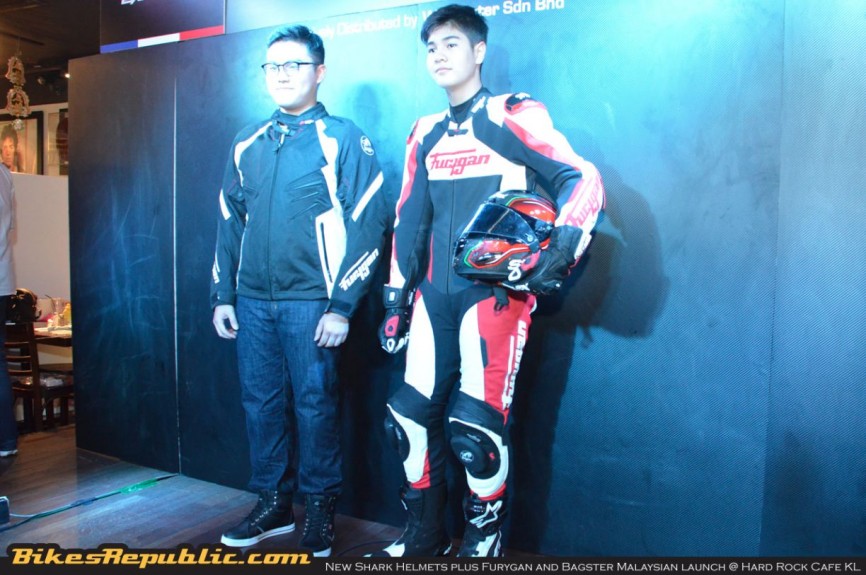 Winmaster Sdn Bhd will be carrying both the Bagster and Furygan brands in Malaysia alongside Shark helmets. Expect to see these two French brands’ range of product’s arriving on shelves nationwide very soon.

In the meantime, you can check out Furygan’s full range on its website as well:
www.furygan.com