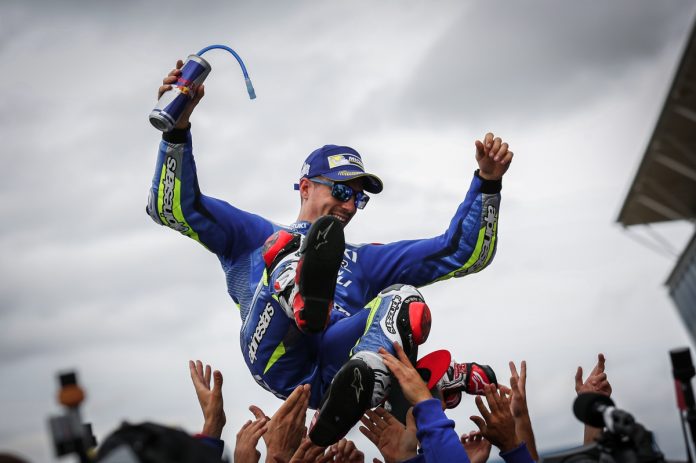 The action-packed Octo British GP got underway last weekend and bored more surprising results for the 2016 MotoGP season. Here’s what transpired in all three classes at the historic Silverstone circuit. 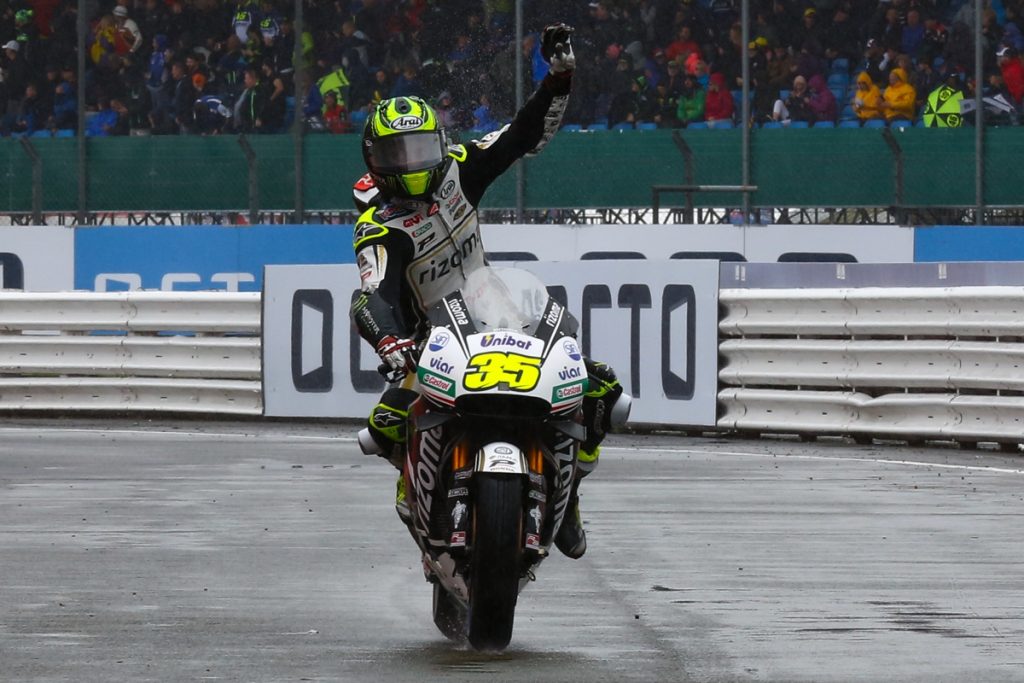 Though it was local hero Cal Crutchlow astride a satellite Honda that ruled Saturday’s wet Qualifying session, it was fellow front runner Maverick Viñales astride the factory-backed Team Ecstar Suzuki that was in a class of his own. 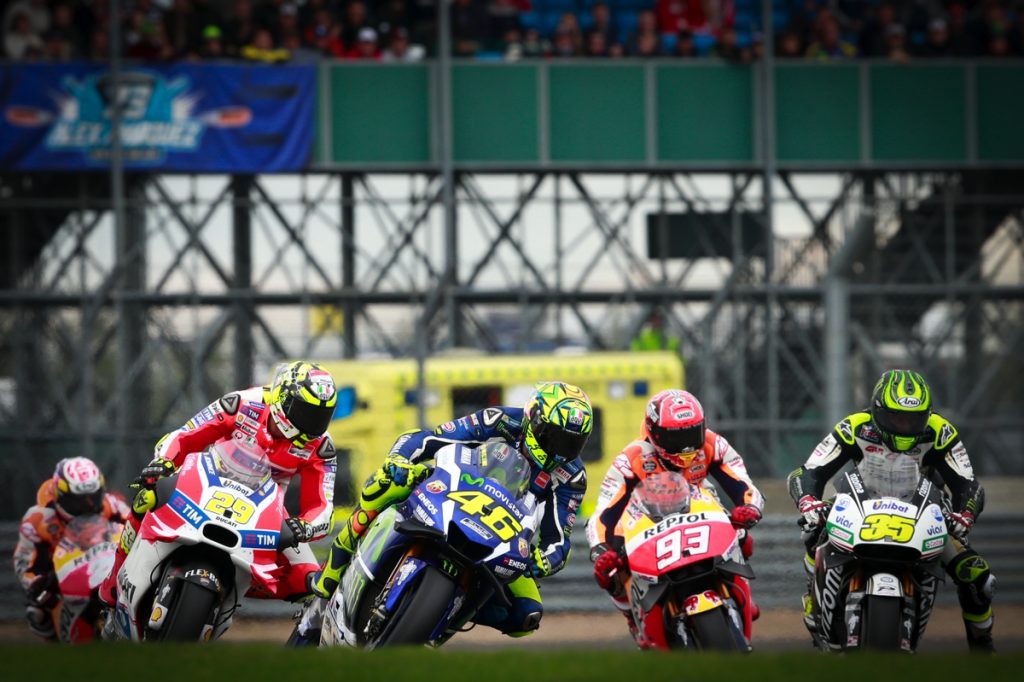 Even in the restarted race, the superior dvantage Viñales held with his factory Suzuki machine was unmatched. The young Spaniard only took a few laps to pip Crutchlow and Rossi for the lead and stormed away at the head. 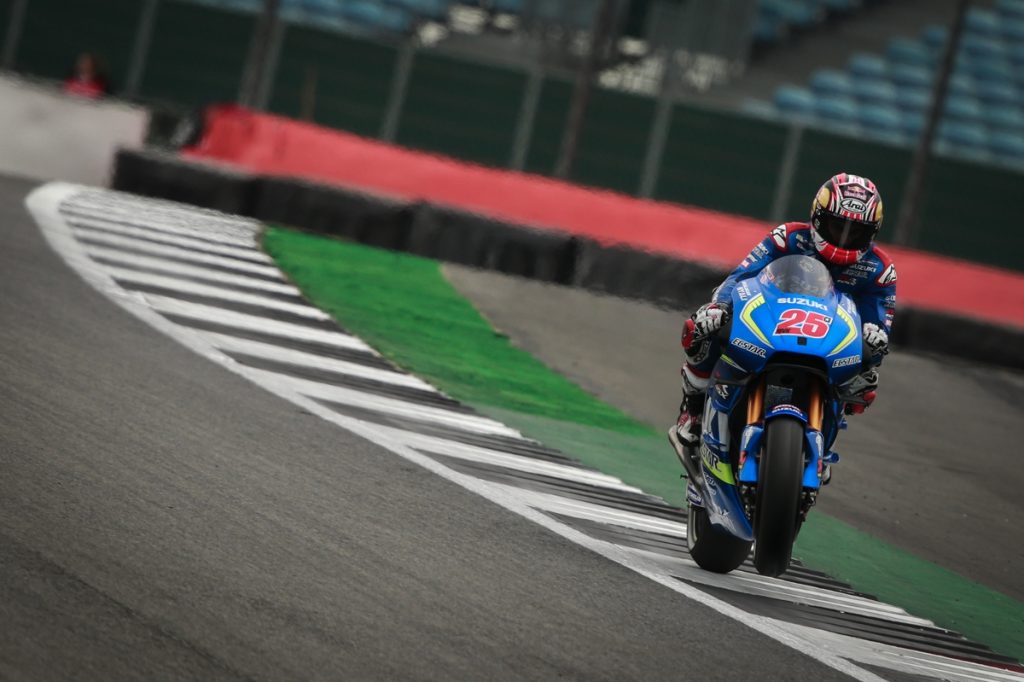 Whilst Viñales rocketed away astride his blue Suzuki missile, a five-way battle raged on behind between Crutchlow, Rossi, Repsol Honda’s Marc Marquez and Ducati’s Andrea Iannone. Whilst the latter Italian crashed out as a result of pushing too hard, championship leader Marquez battled against Crutchlow and Rossi for the remaining two podium spots.

Alas, a mistake by Marquez in the last few laps saw him run wide and drop down the order, but the factory Honda rider eventually settled for fourth ahead of teammate Dani Pedrosa in fifth. 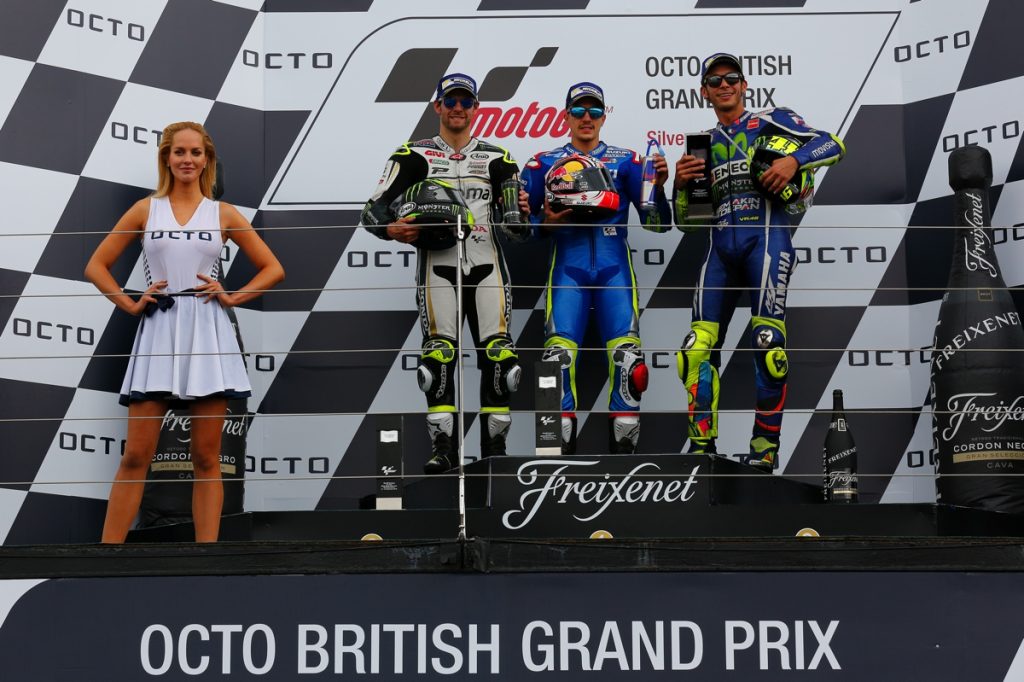 Suzuki’s Viñales would cruise to an easy victory as he finished 3.480 seconds ahead of Crutchlow in second. The latter Brit also stood as the best performing independent team rider astride the satellite LCR Honda machine whilst Rossi settled for the final podium spot in third. 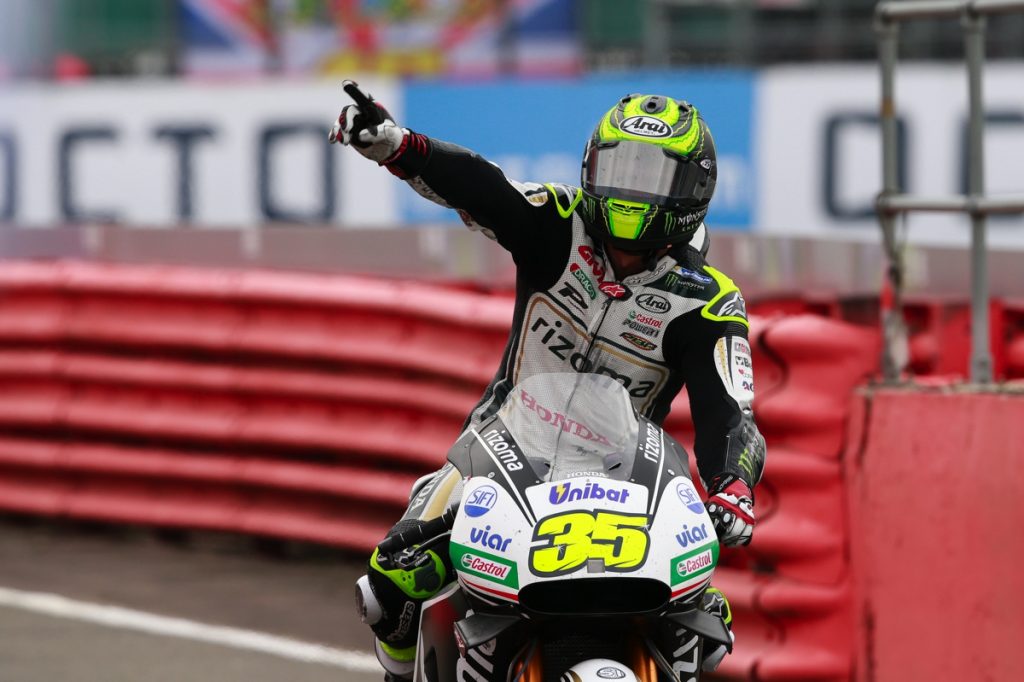 Viñales has scored a historic maiden not just for himself, but also the factory Suzuki squad’s first since its return. For local hero Crutchlow, he becomes the first British rider to score a GP podium on home soil since Barry Sheene as well. 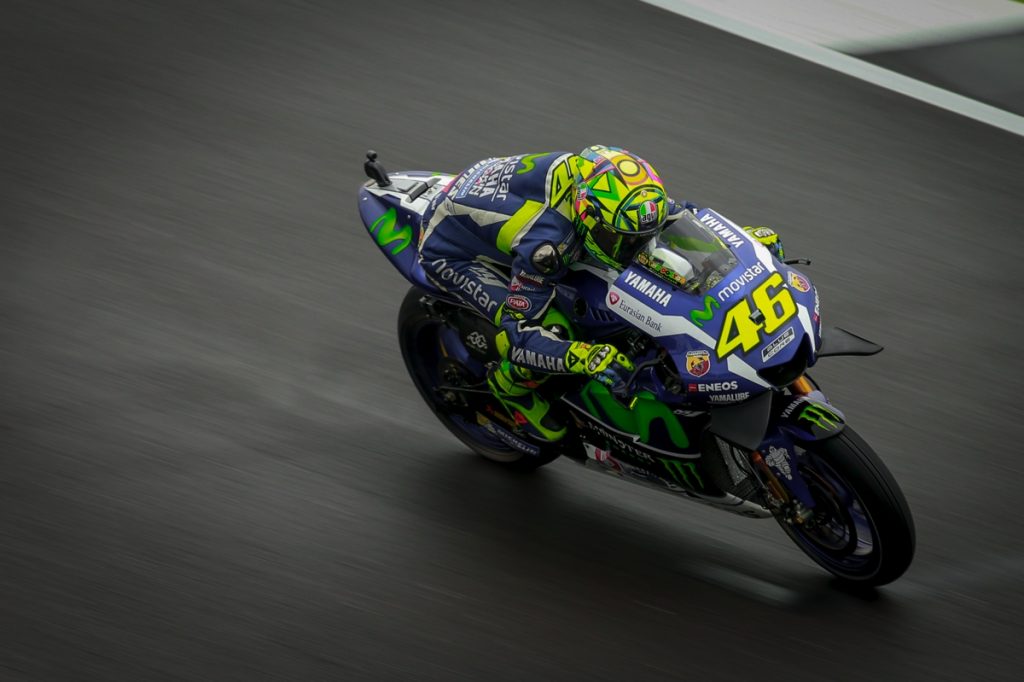 Despite missing out on the podium, Marquez still holds a firm 50-point lead in the standings with 210 points. Rossi is second with 160 points whilst defending world champion Jorge Lorenzo sits a distant third with 146 points scored so far. Lorenzo’s chances of retaining his title appears bleak at this moment, and we may be in for a Marquez vs Rossi title fight from here on. 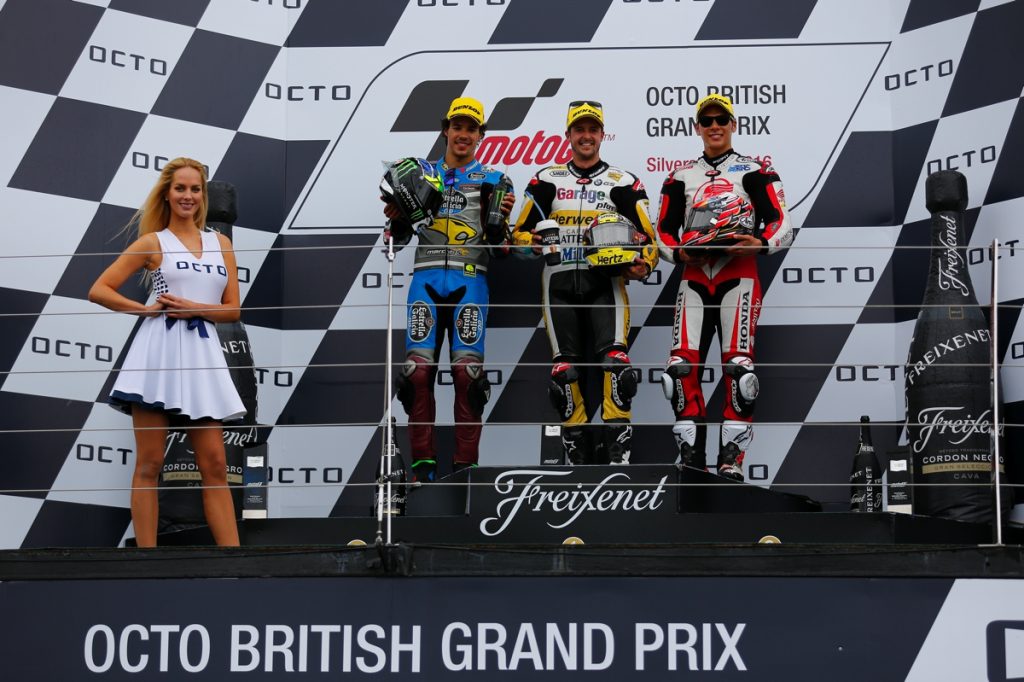 Alas, a collision with defending class champion Johann Zarco in the final laps of the race cost both riders dearly, with the latter Frenchmen hit with a sanction by officials as well. Victory instead went to Swiss rider Thomas Luthi astride the Garage Plus Interwetten Kalex machine.

Italian rider Franco Morbedelli who rode the Marc VDS Kalex bike to second joined Luthi on the podium. Takaaki Nakagami claimed third astride the Idemitsu Honda Team Asia Kalex machine ahead of Malaysian rider Hafizh Syahrin in fourth astride his Petronas Raceline Malaysia Kalex – the latter Malaysian scoring one of his best results of the season and his career too. 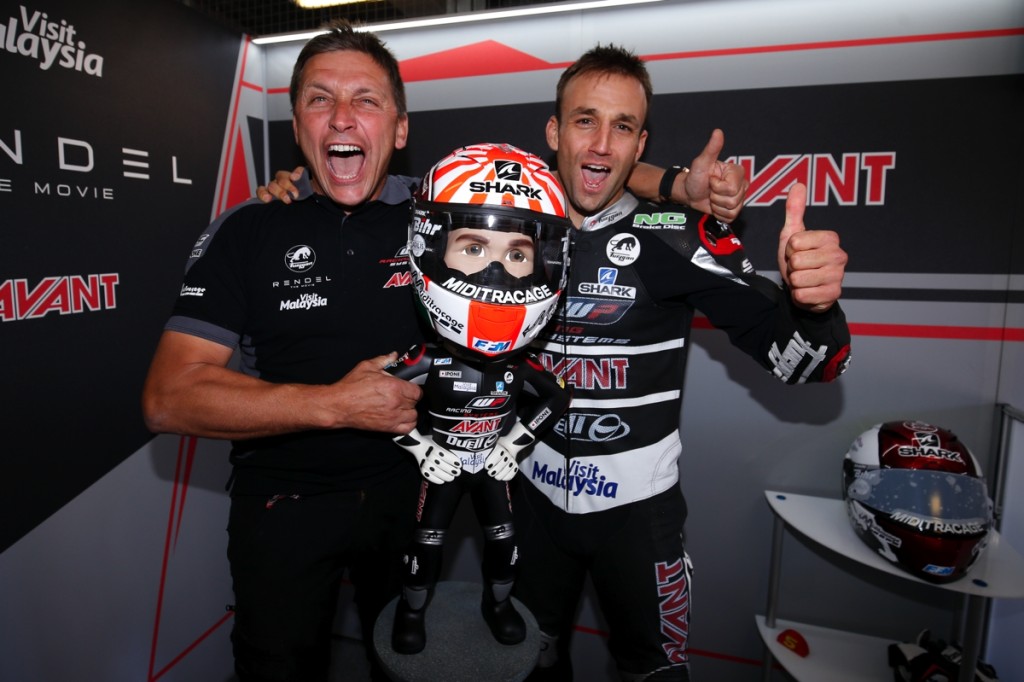 Despite the dismal outcome, Frenchman Zarco still holds the lead in the Moto2 standings with 181 points. However, the Ajo Motorsports Kalex rider is only 10 points ahead of Alex Rins in second with 171 points whilst Sam is a distant third with 137 points. Rest assure that Zarco, who’s bound for MotoGP next season, will need to beef up his efforts if he wants to be Moto2’s first repeat champion.

Moto3
Last but not the least came yet another thrilling battle in the lightweight and highly competitive Moto3 class. Winning here was championship leader Brad Binder who, together with his Red Bull KTM Ajo teammtes Bo Bendsnyeder, secured the team a double podium finish with the latter Dutch rider scoring his maiden podium by finishing third. 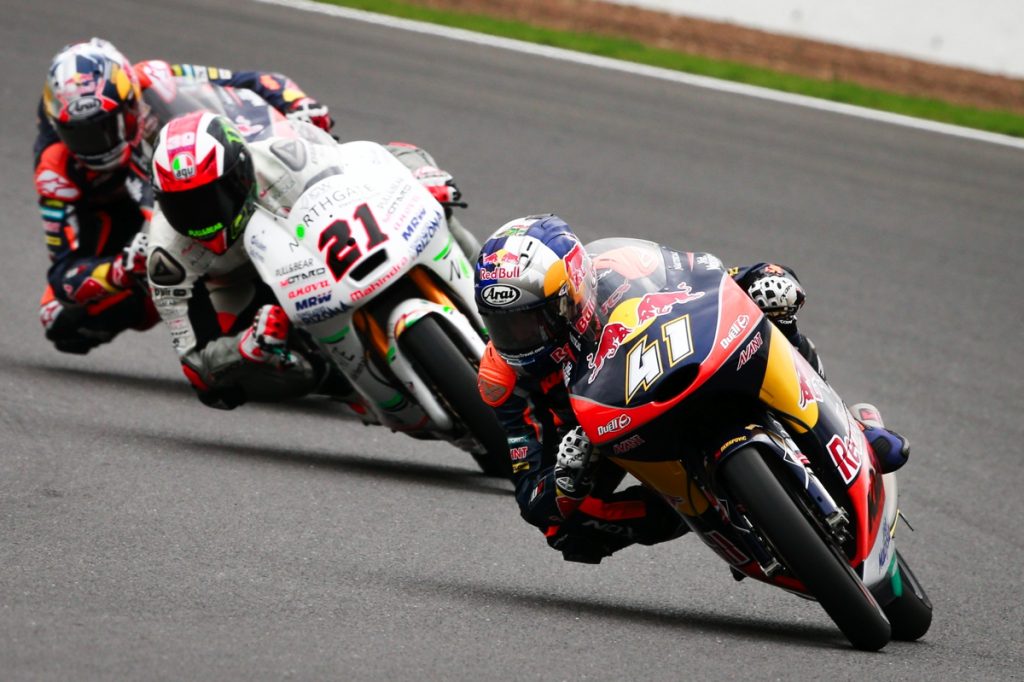 South African rider Binder’s win didn’t come cheap as he had to fend off the charges of at least five other riders including Italian wildcard rider Stefano Manzi astride a Mahindra. Coming in second was leading Mahindra rider Francessco ‘Pecco’ Bagnaia who split the two KTM riders on the podium. 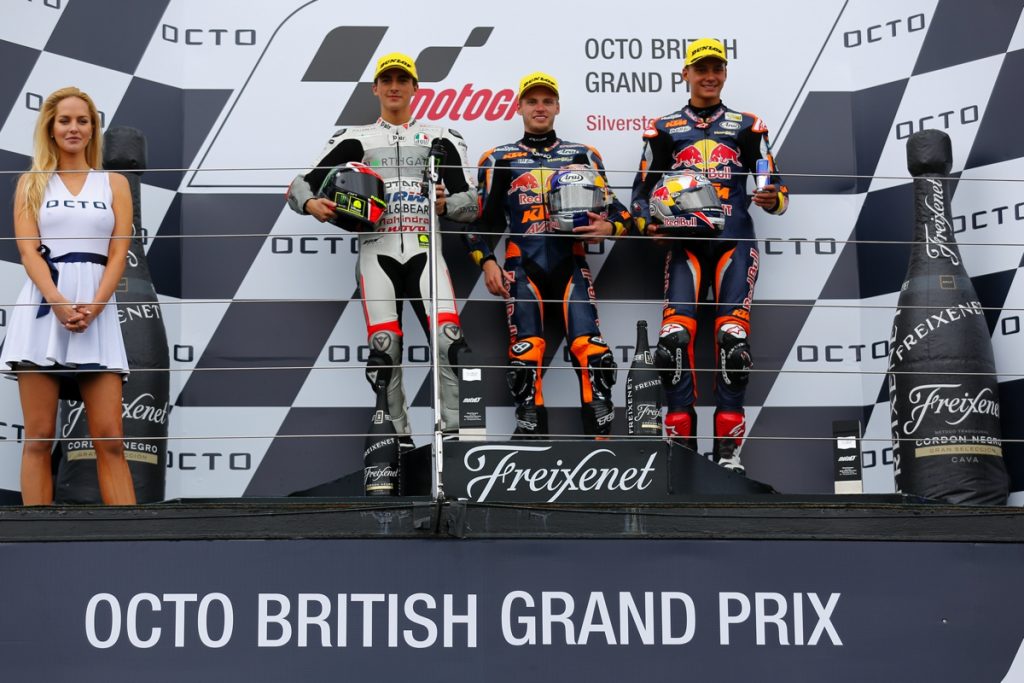 In the standings, Binder still holds a commanding lead with 204 points whilst Jorge Navarro remains in a distant second with 118 points. The latter Spaniard’s retirement from Sunday’s race has basically ruined his chances to chase Binder in the title fight following the South African’s high point-scoring consistency.

Round 13 – Misano
With 12 rounds now completed, MotoGP heads for the Misano World Circuit Marco Simoncelli in less than a week’s time for Round 13 – the TIM San Marino Grand Prix.

The weekend in Misano lasts from 9 Sept to 11 Sept. Sunday’s broadcasts begins with Moto3 at 5pm, Moto2 at 6:20pm and the premier MotoGP class at 8pm (local Malaysian times stated).