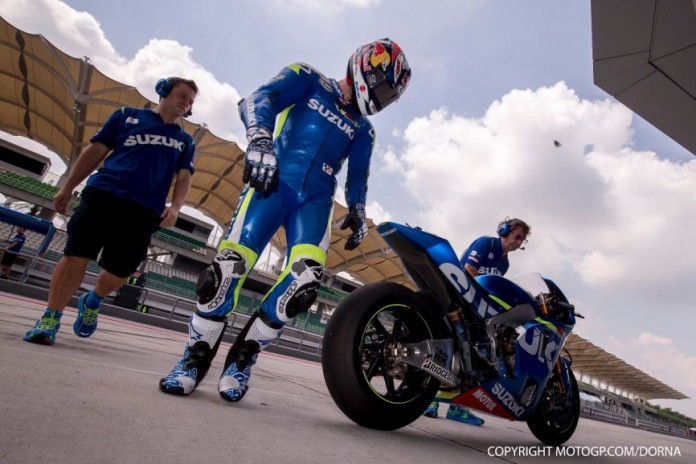 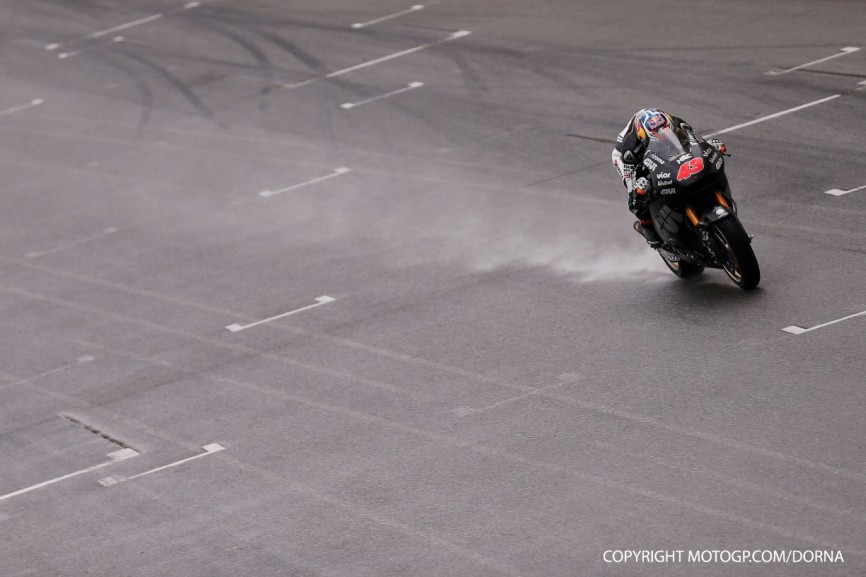 Once again, the MotoGP fraternity made their return to the Sepang International Circuit (SIC) recently for yet another three-day sting of official pre-season tests. The Sepang Test 2 saw plenty of new hardware being trialled and tested, with some outfits showing clear signs of improvements ahead of the 2015 season. Here’s our re-cap of the three-day soiree in detail.

Day 1 – The Doctor’s way
The Movistar Yamaha team had high hopes riding on its new seamless gearbox, and to the delight of many of Yamaha’s factory engineers, the component shows sign of great performance. Topping the day’s time sheets was none other than Valentino Rossi. 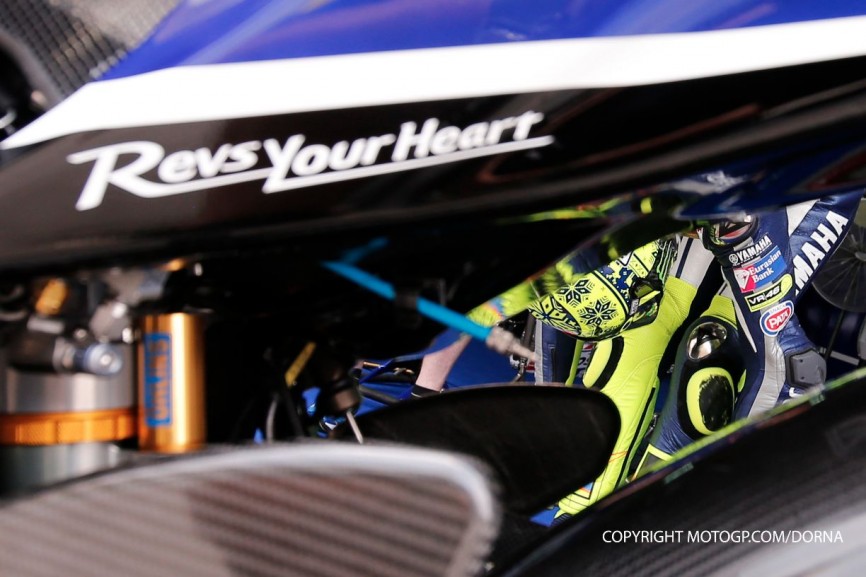 The Doctor managed to take his YZR-M1 machine with the new transmission to clock in an impressive time of 2:00.414 in the early parts of the day. Rossi’s closest rival for the day was Repsol Honda rider Dani Pedrosa who surprisingly managed to outperform his teammate and reigning world champion Marc Márquez with the day’s second fastest time of 2:00.543.

Márquez could only settle for 6th following the extreme heat early on in the day and the subsequent thunderstorm that came in the latter part of the session. The storm, complete with lightning, was severe enough for officials to red-flag the session, hampering most other riders from putting in quicker times. 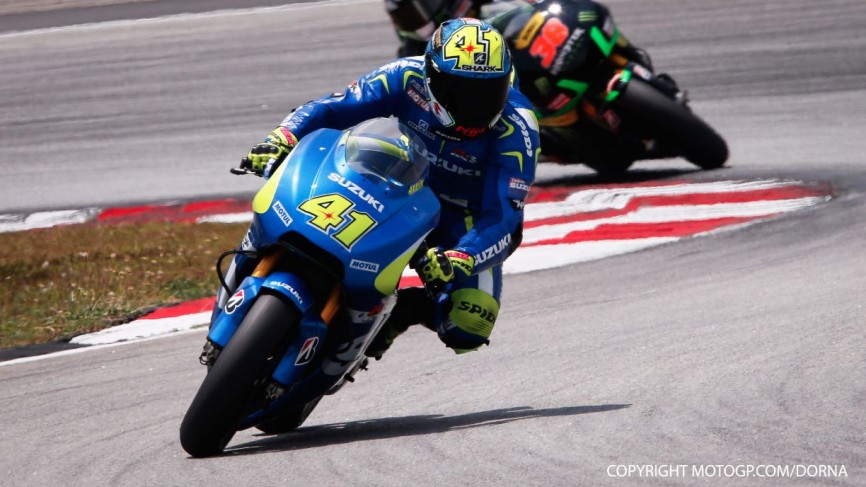 Besides Rossi’s form, the day’s other best performer has to be Aleix Espargaro who took the new Suzuki GSX-RR machine to rank as the day’s fourth fastest, not to mention rookie teammate Maverick Viñales’ equally spectacular feat at being the 9th fastest. Clearly, things are looking well for the returning Japanese S-brand with its two Spanish riders.

The Italian factory teams, on the other hand, did not look so good here. Just works team rider Andrea Dovizioso making it in the top 10, but only just. The feat proved Dovizioso as the better half at getting to grips with Ducati’s new GP15 bike as oppose to teammate Andrea Iannone who ranked 15th. However, it is worth noting that both Dovizioso and Iannone spent the day riding both the out-going GP14.3 and brand new GP15 bikes back-to-back.

For Aprilia, the day was fairly dismal. Development of their RS-GP machine continued, with the Aprilia Racing Team Gresini bringing down an ‘evolution’ of the bike used in the first test a fortnight ago. While it allowed Alvaro Bautista to finish the day in 12th, star rider Marco Melandri was clearly struggling still after finishing the day at the bottom in 27th. 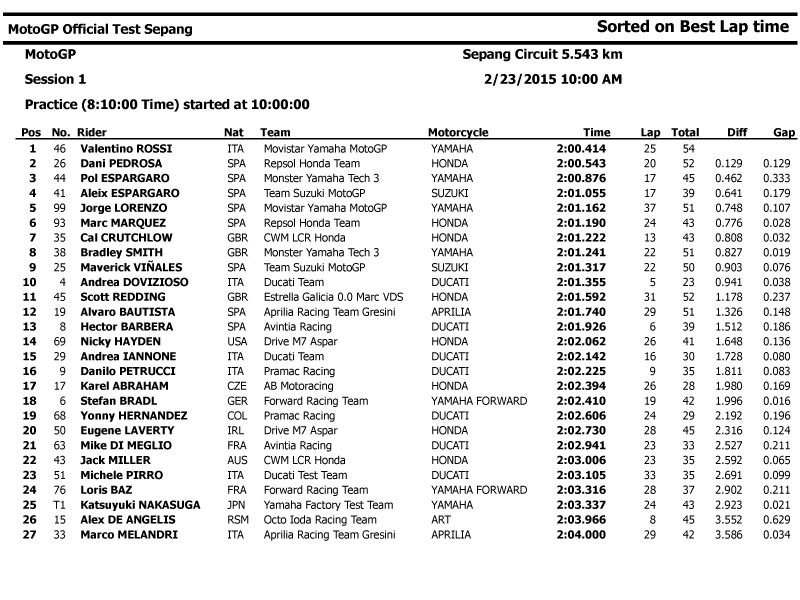 Day 2 – Making his ‘Marc’
Under better weather conditions compared to the previous day, reigning world champion Marc Márquez came back in top form, snatching the day’s fastest time with an impressive timing of 1:59.844. With the feat, Márquez evidently overcame the gremlins he suffered the day before, specifically in the area of braking performance. 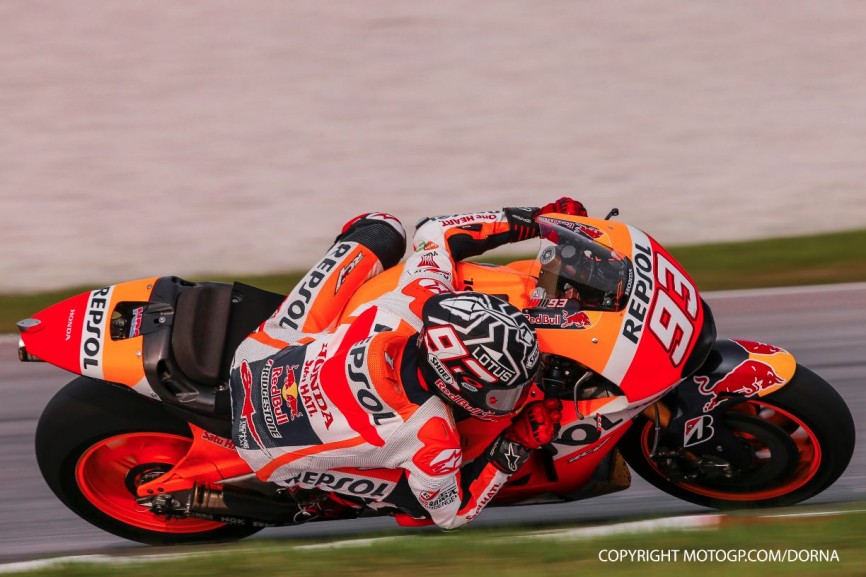 Jorge Lorenzo’s ranking as the day’s second fastest also brought another sigh of relief for Yamaha factory engineers. His fastest time of 1:59.902 once again proved that the Japanese works team has got things right with its new seamless gearbox, with Lorenzo lapping just +0.058 off of Márquez pace. Only Márquez and Lorenzo broke the 2 minute-mark in the timing sheet. 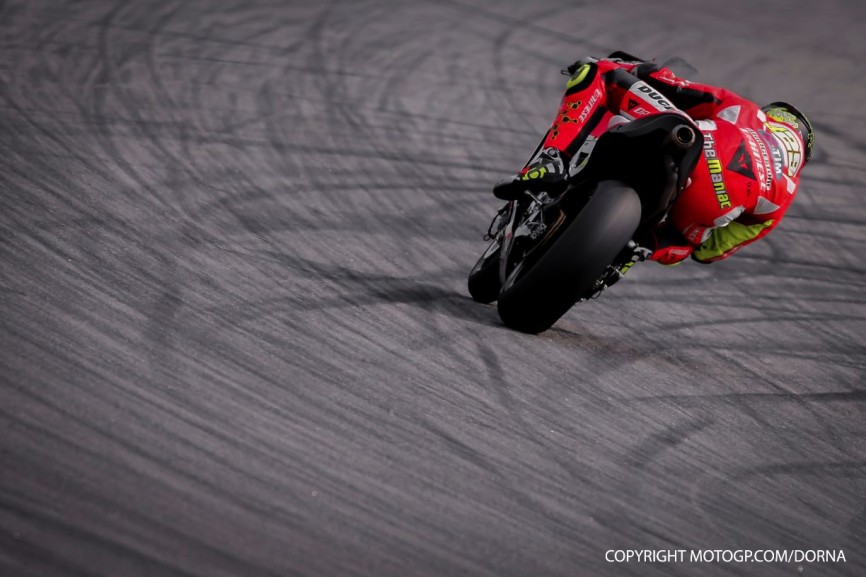 The works Ducati outfit made their biggest improvement here following a dismal outing in Day 1. Andrea Iannone’s late charge in the new Ducati GP15 machine saw him ranked as the day’s third fastest with his 2:00.098 flying lap. Teammate Andrea Dovizioso wasn’t far behind as his fastest time of 2:00.250 ranked him fourth fastest. 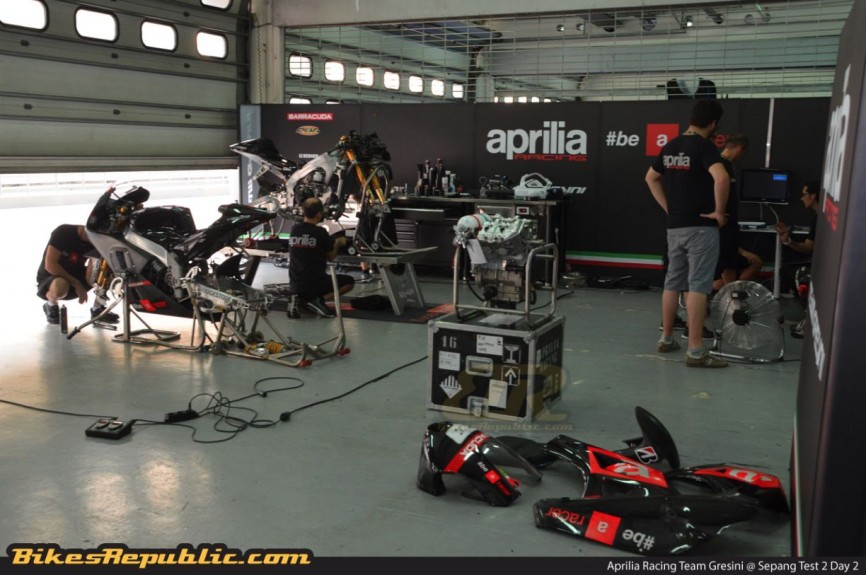 However, for the Aprilia outfit, the struggle continues. both Alvaro Bautista and Marco Melandri finished the day with times slower than those logged in Day 1, with Bautista only managing a best lap time of 2:02.221, and Melandri still at the bottom of the time sheet. Read our exclusive insight with the Aprilia Racing Team Gresini at the end of Day 2 here (LINK). 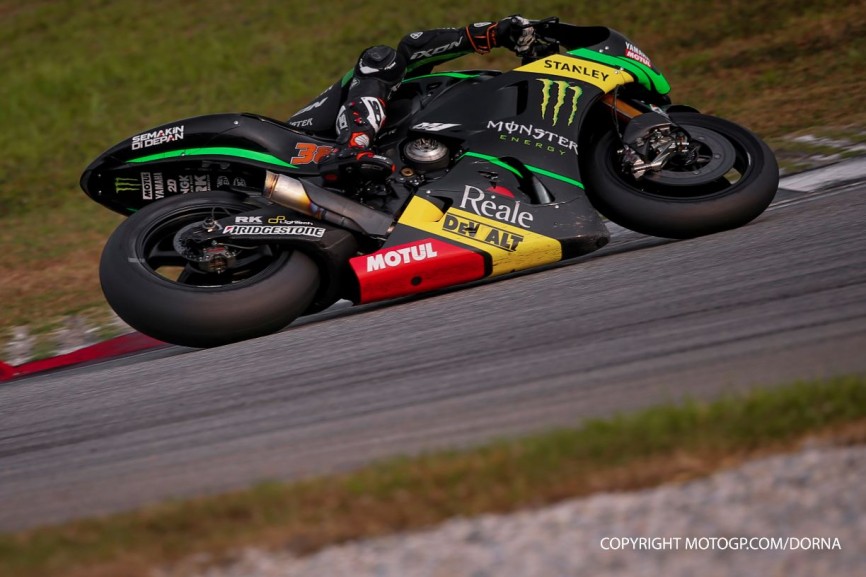 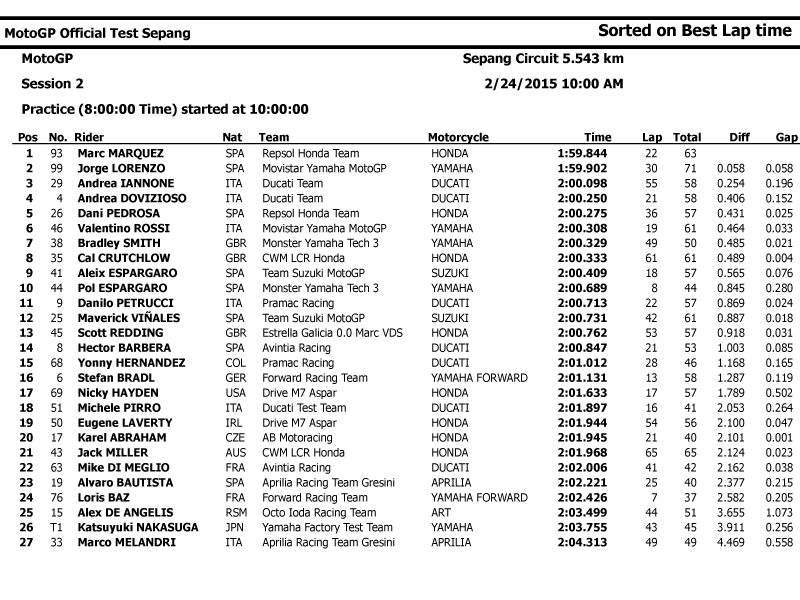 Day 3 – Hot hot heat!
Unlike the last test, the final day of the Sepang Test 2 saw no magic moments as sweltering heat and humidity did not offer the best levels of grip. Most opted to conduct race simulations in the afternoon, with only brief flying laps early on in the day. 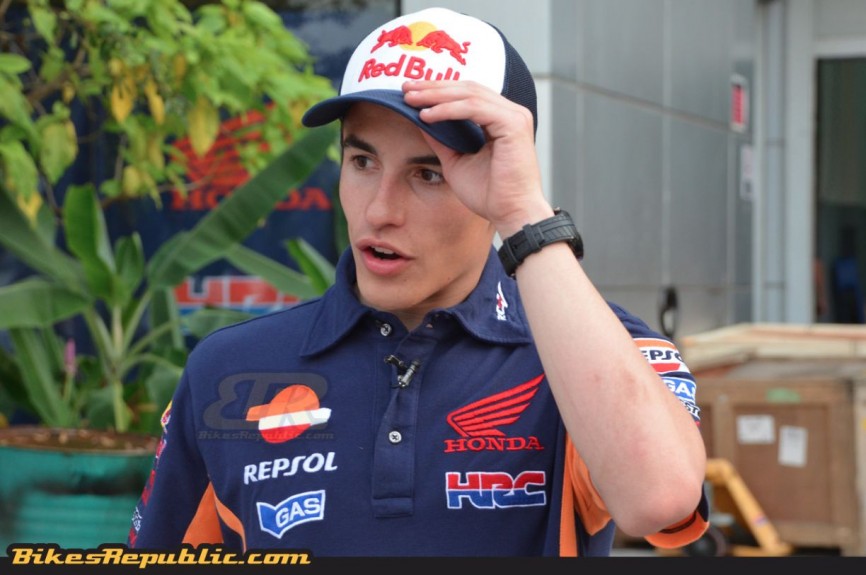 Topping the time sheet was none other than Repsol Honda’s Marc Márquez with his fastest time of 1:59.115. Márquez, along with Lorenzo in second, Crutchlow in third, Iannone in fourth, Rossi in fifth, Bradley Smith in sixth, as well as Dani Pedrosa in seventh broke the 2-minute mark. This signalled a much quicker pace from all riders compared to the previous day. 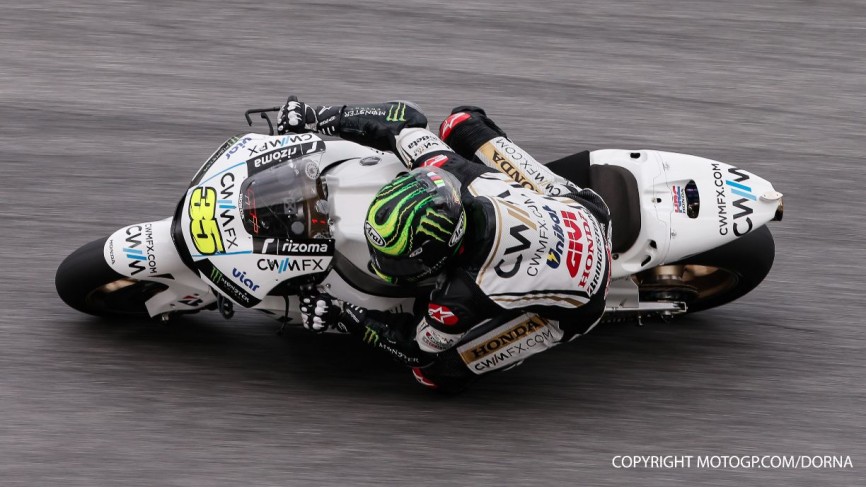 The biggest surprise here was Cal Crtuchlow’s third fastest time of 1:59.658 astride the satellite LCR Honda machine. Jorge Lorenzo again outperformed his teammate Rossi after charting a laptime of 1:59.437 with the Yamaha YZR-M1 machine to rank him as the day’ 2nd fastest.

Suzuki again ended the test day on a positive note. Experienced rider Aleix Espargaro managed a time of 2:00.275, placing him ninth in the time sheet. His rookie team-mate Maverick Vinales, on the other hand, finished the day only three-tenths of a second slower at 2:00.604, ranking him 14th. So far, the Suzuki machines and its Spanish riders looks set to become strong midfielders once racing begins next month.

Aprilia continues to struggle in the final day of testing. Alvaro Bautista saw little success over teammate Marco Melandri who struggled still, despite hoping on what we believe is the very latest form of Aprilia RS-GP machine. Melandri still ended the day at the bottom of the time sheet whilst Bautista could only improve by 0.4 seconds over his times in the previous day. 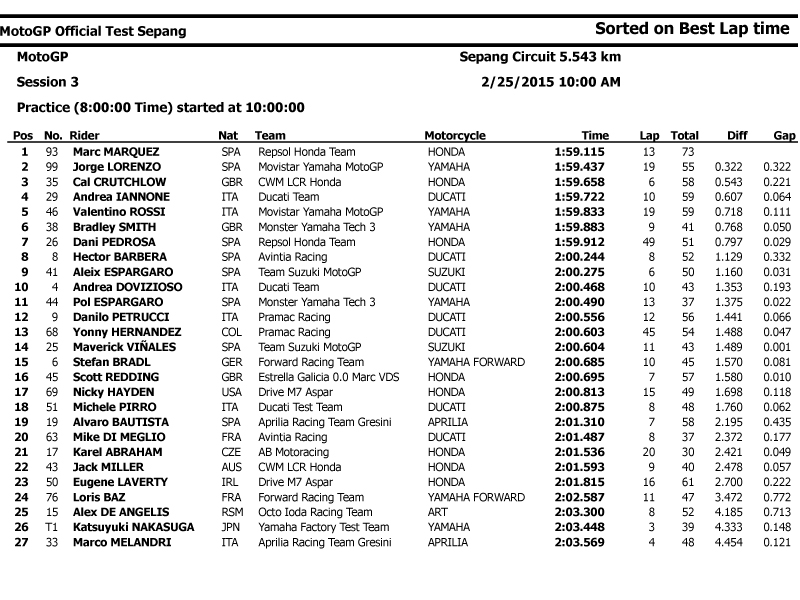 With the test in Malaysia officially concluded, several riders and outfits are staying back a little longer for a schedule private test with Michelin. The next official test will take place from March 14 to March 16 in the Losail Circuit, Qatar, shortly before the 2015 season kicks off.