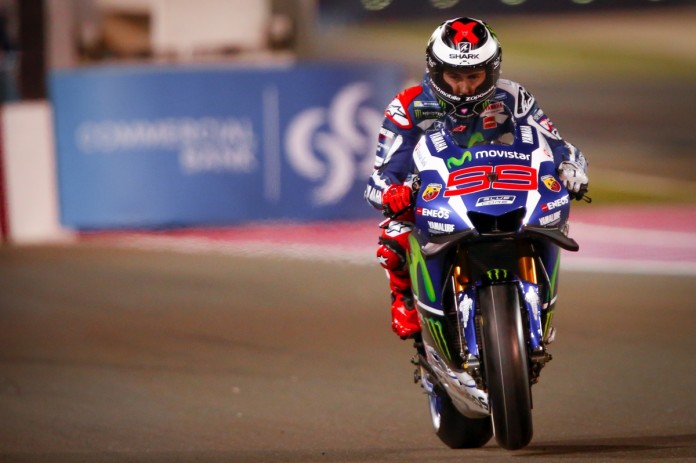 MOTOGP
The season-opening races of the 2016 MotoGP world championships got underway under the desert heat and floodlights of the Losail International Circuit, Qatar. Though many had casted doubts over the premier MotoGP class’ new unified of ‘spec’ electronics suite and the performance of the new Michelin tyre supply, all that quickly went out the window as the chequered flag rolled out with reigning world champion Jorge Lorenzo taking victory. 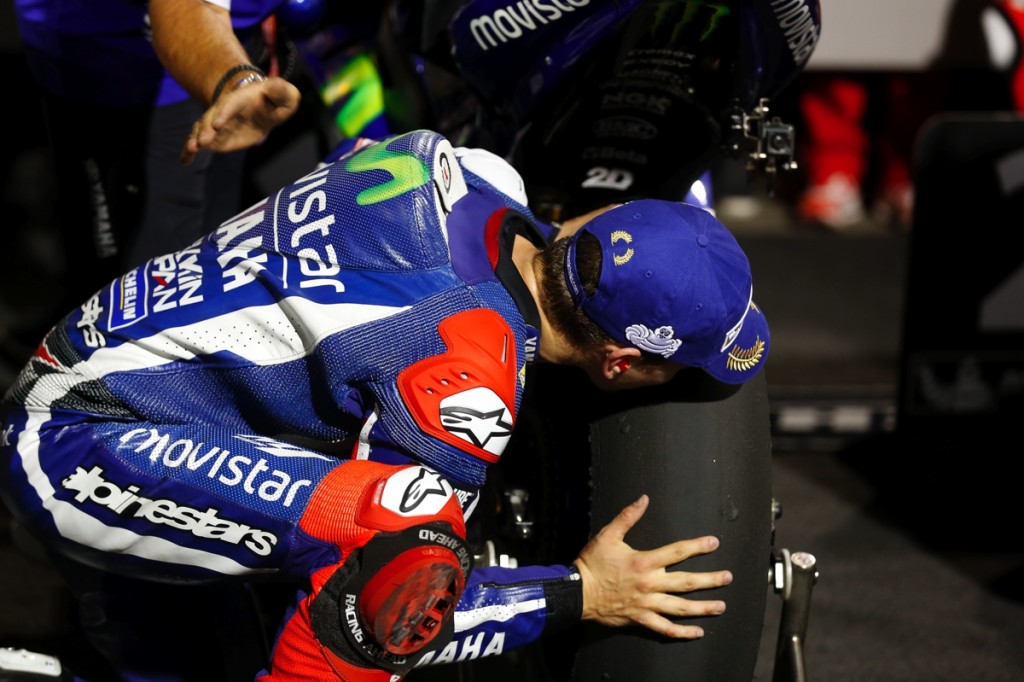 Lorenzo’s weekend began on a high note having shown strong pace throughout the weekend’s practice sessions. Astride the updated Movistar Yamaha Factory Racing team’s Yamaha YZR-M1 machine, the Spaniard claimed pole position on Saturday after clocking in his fastest time of 1:54.543. 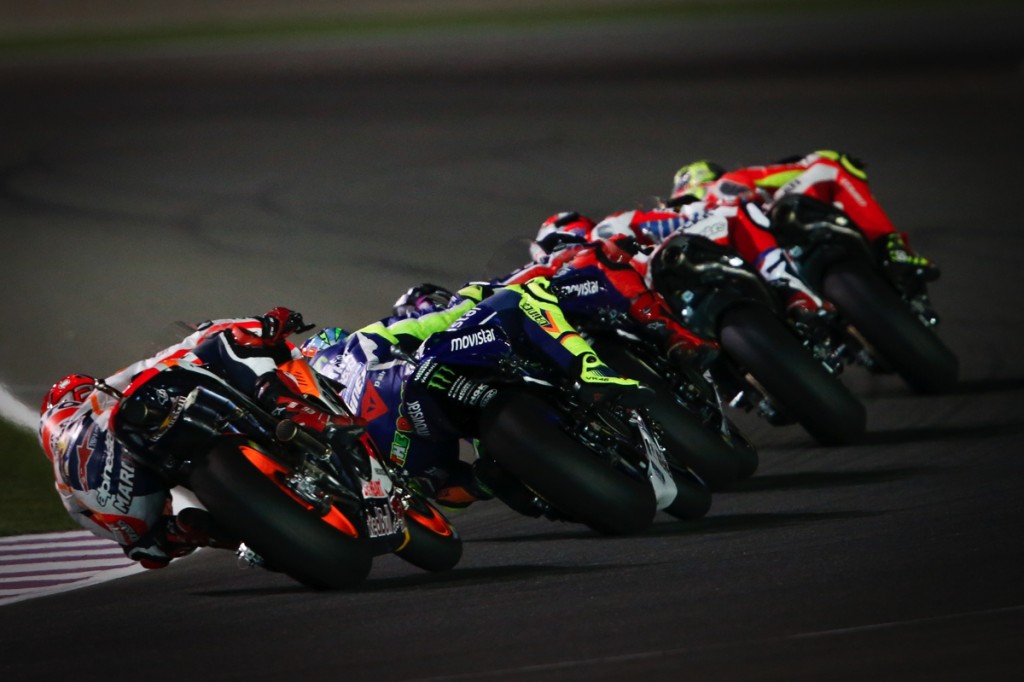 A last minute rear tyre switch from the medium to the soft compound option proved to be a worthy gamble for Lorenzo come Sunday. Despite losing out on pace during the start against the immensely powerful Ducati machines. Andrea Iannone would eventually push too hard and crashed out early in the midst of battling for the lead against teammate Andrea Dovizioso, but Lorenzo was able to pass Dovisiozo as soon as his tyres were in their prime temperatures. By the time the chequered flag waved for Lorenzo, he had already built up a significant gap of 2.019 seconds ahead of Andrea Dovizioso in second. 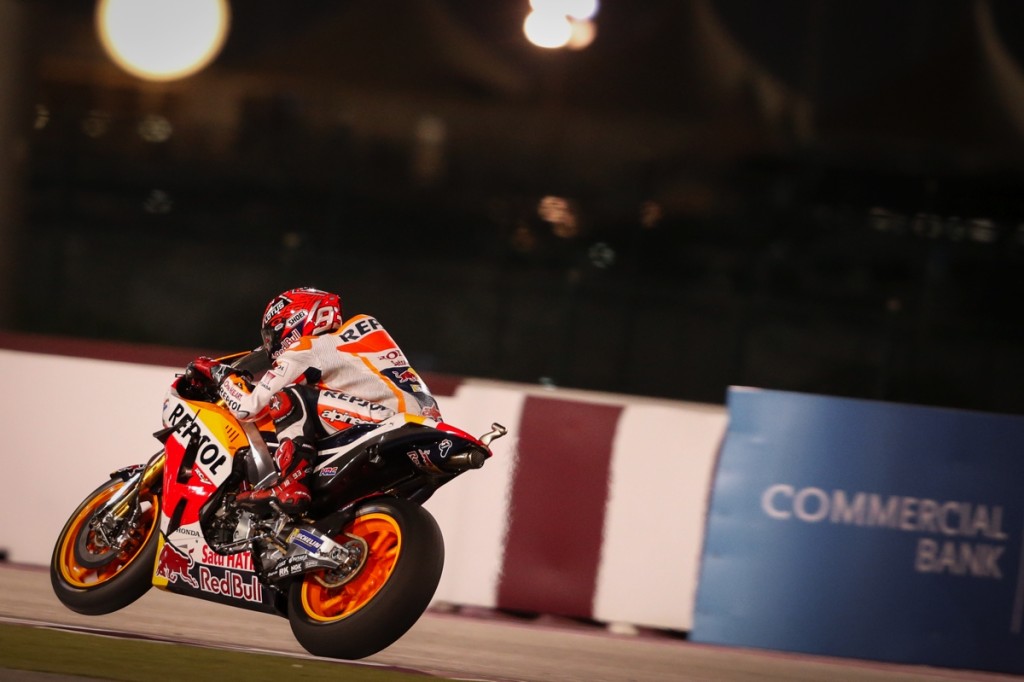 Despite the poor pace of the updated factory-spec Honda RC213V machine, former world champion Marc Marquez again performed sensationally. The young Spaniard started from second on the grid astride the Repsol Honda machine, giving viewers around the world a nail-biting spectacle as he battled against the two Ducatis early on, culminating with his third place finish not far off behind Dovizioso in second. 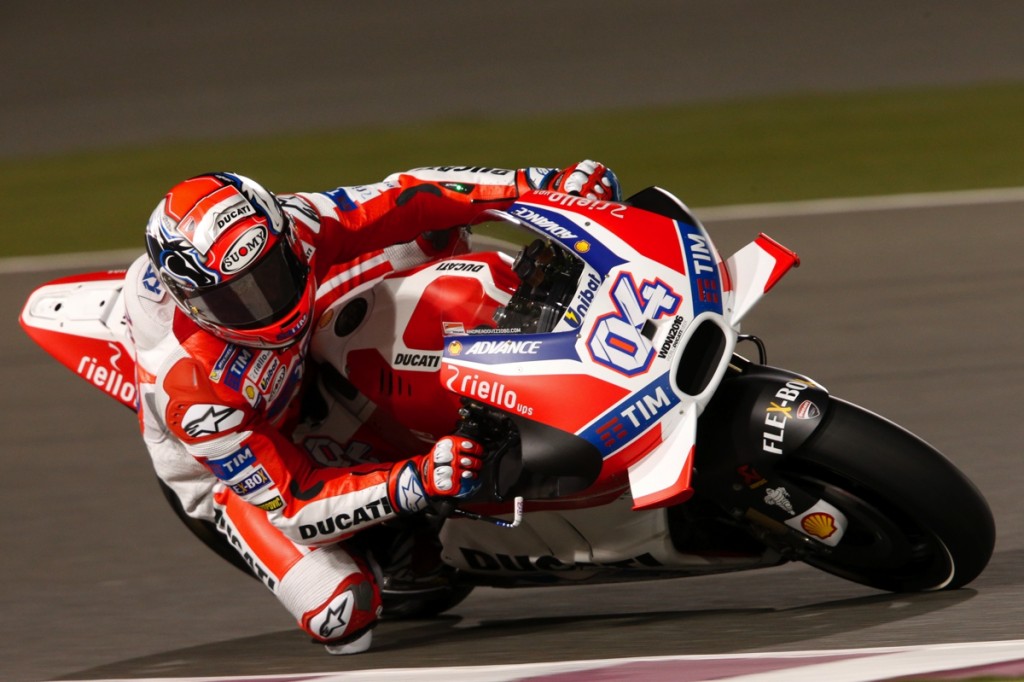 Fresh from announcing his two-year extension with the Movistar Yamaha Factory Team, Valentino Rossi took the second factory Yamaha machine to finish fourth. Rossi has already shown his ability to adapt himself with the new tyres and electronics, and is hungry for his tenth world title this year, making him one to look out for this season indeed. 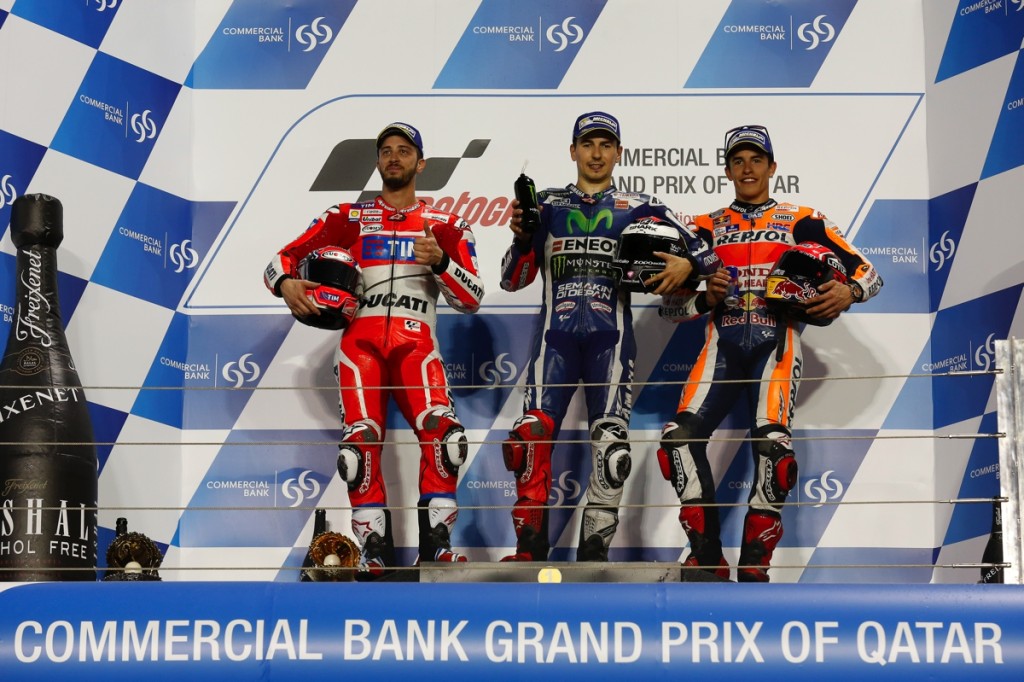 As the field leaves the Qatari desert, Lorenzo is on course for his title defence by scoring the maximum 25 points to take the lead in the standings. Ducati’s Dovizioso ranks second with 20 points, followed by Marquez in third with 16 points and Rossi in fourth with 13 points.

MOTO2
The first Moto2 race of the year got off to a dramatic and awkward start. A total of nine riders were penalised for jumpstarting and it included defending class champion Johann Zarco (Ajo Motorsport Kalex) plus several other top flight riders such as Sam Lowes ((Federal Oil Gresini Kalex) and Alex Rins (Paginas Amarillas HP 40 Kalex). All three plus several others were handed ride-through penalties, ending their weekend on a sour note. 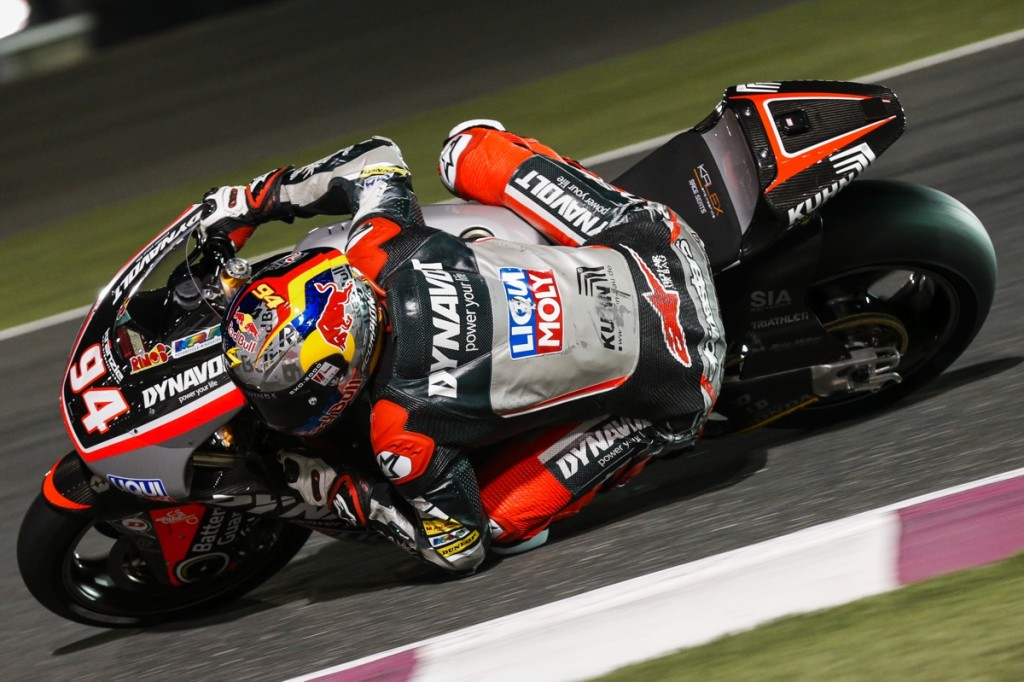 Disaster also struck pole-sitter Jonas Folger. Despite rocketing off with a perfect start astride the Dynavolt Intact GP Kalex machine, the German rider’s run came to an early end after crashing out whilst pushing hard to create a comfortable gap. This allowed Thomas Luthi (Garage Plus Interwetten Kalex) and Franco Morbidelli (Estrella Galicia 0,0 Marc VDS) to charge ahead with their battle electrifying the crowd right down to the last lap. 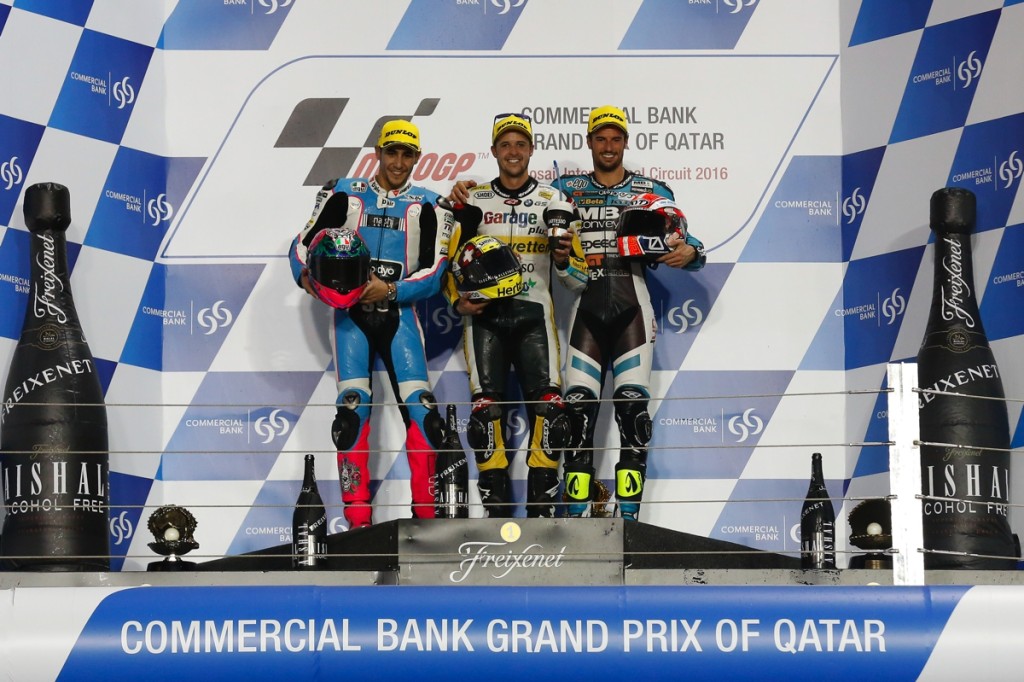 Whilst Thomas would eventually claim the race win, Morbidelli was robbed of his second place podium celebration after a delay with officials in handing out his penalty for a jumpstart. He was penalised with 20 seconds added to his race time instead, dropping him down to seventh thus elevating Luis Salom (SAG Team Kalex) into second and Simone Corsi (Speed Up Racing) into third, followed by Malaysian Hafizh Syahrin (Petronas Raceline Malaysia Kalex) into a sensational fourth place.

As a result, Luthi kicks off his Moto2 season by leading the championship standings having scored the maximum 25 points, followed by Salom in second with 20 points, Corsi in third with 16 points.

MOTO3
Last but not least came the year’s first Moto3 race. Being the first category contested on Sunday, the class once again brought out one of the best races in its history with a six-way battle for the lead between a variety of machines – Honda, KTM and Mahindra. 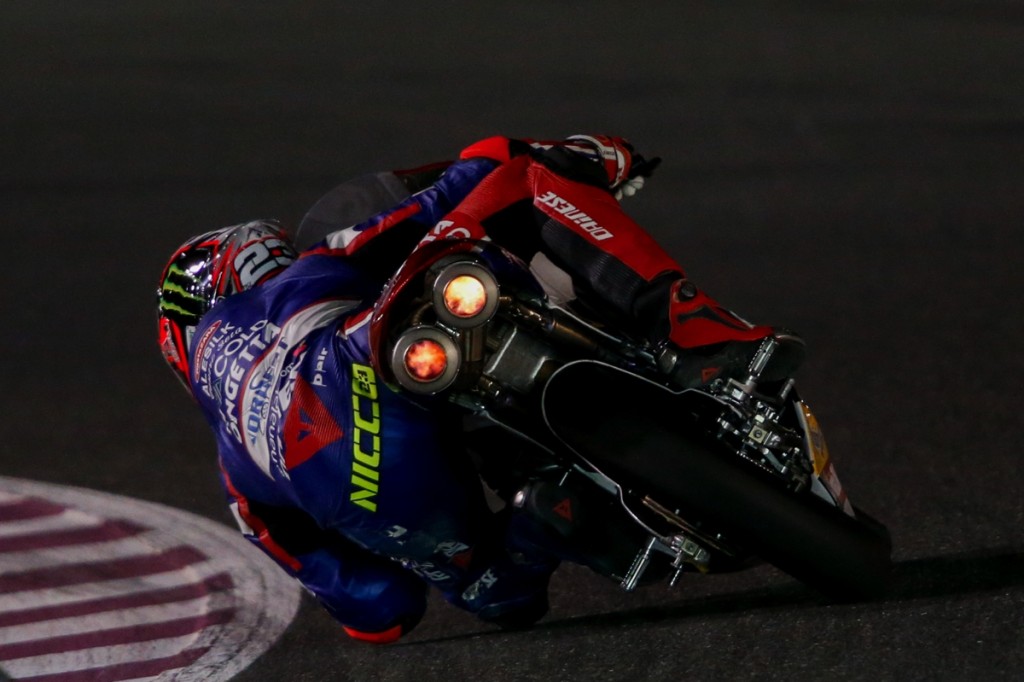 Despite starting further down in seventh, Ongetta-Rivacold Honda rider Nicollo Antonelli capitalised on is perfect start to move up the order and take the race win. His victory didn’t come cheap as he had to fend off the charges from five other riders astride rivalling Honda and KTM machines plus one lone Mahindra bike, all vying for podium spots.

The race eventually came down to the wire with a photo finish as Antonelli won by just 0.007 seconds ahead of South African rider Brand Binder astride the Red Bull KTM Ajo machine. Just 0.148 seconds behind in third was Francesco ‘Pecco’ Baganaia astride the Aspar Mahindra Team machine. 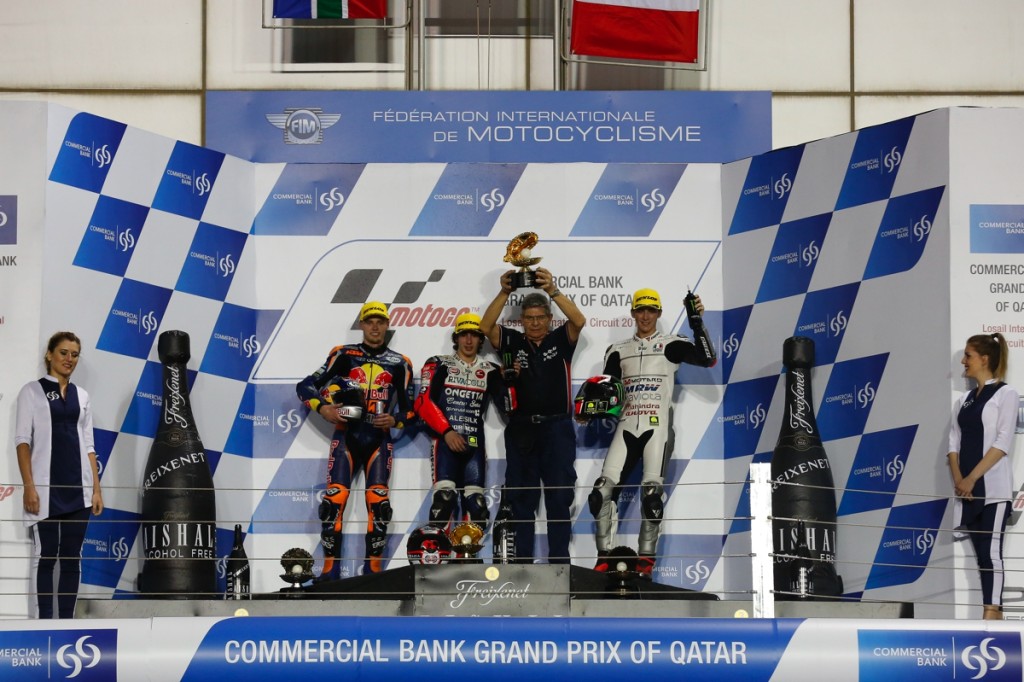 Antonelli leads the standing with 25 points, followed by Binder in second with 20 points whilst Bagnaia sits in third with 16 points.

ROUND 2: Argentina (April 1 – April 3)
Round 2 of the 2016 World MotoGP championships will take place in just a fortnight in the South American nation of Argentina. Sunday’s race schedule begins with Moto3 at midnight*, followed by Moto2 at 1:20am* whilst MotoGP flags off at 3:00am*.