Jorge Lorenzo has been hit with his first setback in his 2016 title defence after crashing out early in the Argentinian MotoGP race. Instead, the weekend’s top glory was snatched away by a resurgent Marc Marquez as the Repsol Honda rider takes his first race win since Phillip Island, Australia last year.

Marquez dominance began on Saturday when he went all out to qualify in pole position. Despite crashing twice, the Spaniard was able to secure his front row start after clocking in his fastest time of 1:39.411. He was 0.375 seconds quicker than Valentino Rossi who qualified in second and 0.533 seconds ahead of Lorenzo who qualified third.

Unpredictable weather conditions and uncertainty in the Michelin tyres that resulted from Scott Redding’s dramatic tyre failure in FP4 forced officials to reduce the race distance to just 20 laps. On top of that, a mandatory bike swap was also enforced, leading to riders strategising their race according to the window set by race official to pit in – from the end of Lap 9 until just before the start of Lap 12.

Drama began in the opening laps when Repsol Honda’s Dani Pedrosa was forced wide after making contact with another rider, which subsequently hampered his pace until the mandatory bike swap. However, it was defending world champion Jorge Lorenzo that felt the most gutted as he low-sided out of contention at Turn 1 on Lap 6, bringing his weekend to an early halt.

Marquez and Rossi’s battle kept fans in the Autódromo Termas de Río Hondo on their feet right up until both riders pitted in to make their bike swap. However, it was Marquez that got the edge thanks to a flawless swap that allowed him to maintain the lead coming out of the pits. From here, the Repsol Honda rider pressed on to create a significant gap ahead of the rest.

A less than ideal setup in his second bike saw Rossi’s pace dropping after the swap, and he soon got himself tangled in a battle with the two factory Ducati riders and Suzuki’s Maverick Viñales for the remaining podium positions. Viñales was the first to fall, ending his weekend early too, but the final drama came when the two factory Ducati riders – Andrea Iannone and Andrea Dovizioso – collided with each other on the last lap at the last corner.

Whilst Marquez took a comfortable victory, Rossi capitalised on the two Ducatis crashing out in front of him to take second, whilst Marquez’ Repsol Honda teammate Dani Pedrosa finished in a well deserved third place after what seemed like a dismal start to the day for him.

With his win, Marquez has overtaken Jorge Lorenzo in the race for the title as he now leads the standings with 41 points. Rossi is second with 33 points whilst Dani Pedrosa elevates himself up into third with 27 points. Now ranked in fourth with just 25 points, Lorenzo will need to work harder to regain the lead and advantage to defend his title. 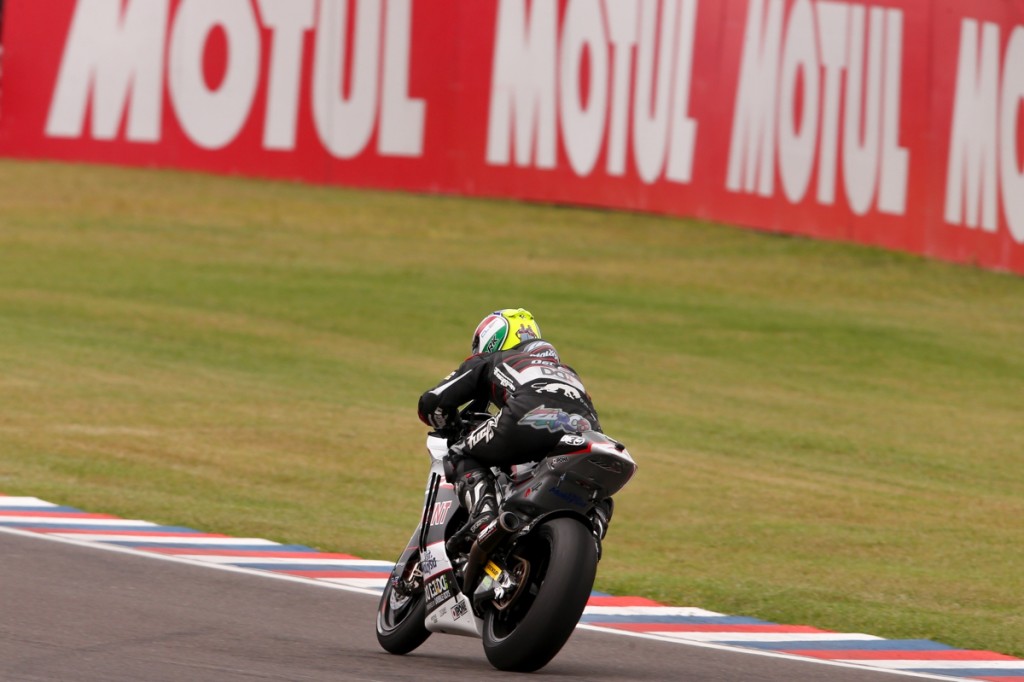 The weekend’s supporting Moto2 race got off to a smooth start with plenty of close and intense racing action. But the day belonged to defending class champion Johann Zarco as the Frechman rode his Ajo Motorsports Kalex machine to take a comfortable win – his second win in a row at the South American circuit. 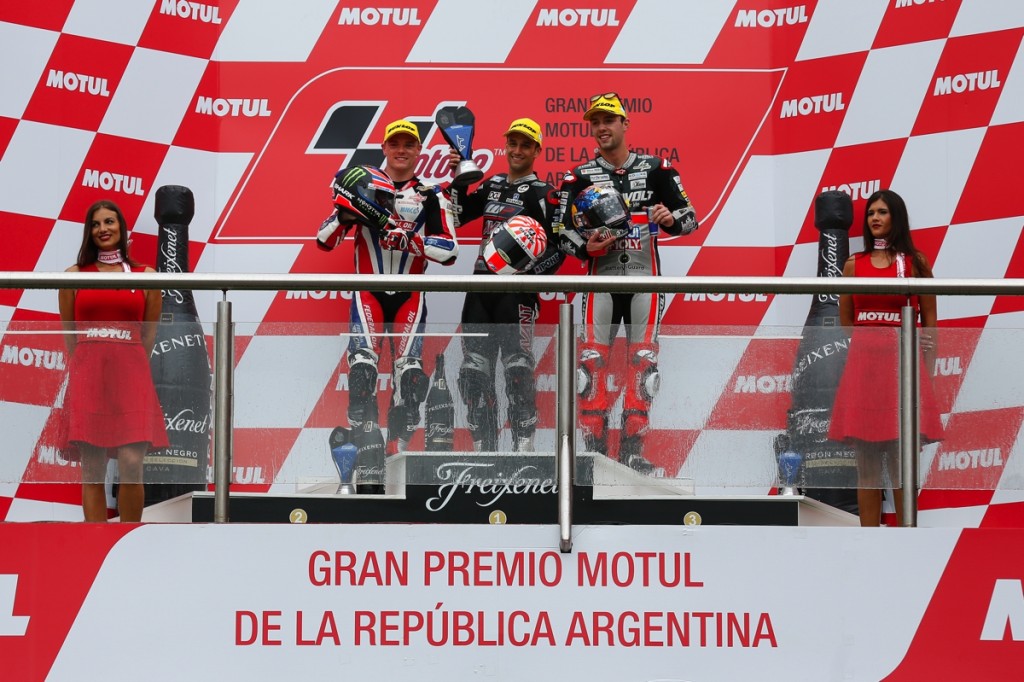 Joining him on the podium was Briton Sam Lowes astride the Federal Oil Gresini Moto2 Kalex bike whilst German rider Jonas Folger astride the Dynavolt Intact GP Kalex finished third. For all three podium winners, this was sweet vindication after the sombre outing in Qatar previously where Zarco and Lowes dealt with jumpstart penalties while Folger dealt with an early crash whilst leading the desert duel.

Swiss rider Thomas Luthi still leads the Moto2 standings with 34 points, but defending champion Zarco is back on track and now sits in second with 29 points, followed by Lowes in third with 27 points.

Petronas Raceline Malaysia Kalex rider Hafizh Syahrin also celebrated yet another strong performance. The Malaysian speedster clawed his way up the order from his 12th place starting position to finish in sixth. Hafizh not only put on a strong performance, he also collected valuable points and remains in fourth place of the standings with 23 points.

History was made in the Argentina GP Moto3 race after rookie Malaysian rider Khairul Idham Pawi stormed to a sensational race win astride the Honda Team Asia bike. Starting from fourth position on the second row, Idham’s perfect start saw him rocketing ahead and led from start to finish with an unbelievable gap ahead of second place finisher Jorge Navarro.

Also worthy of praise here was the performance of yet another Malaysian rookie, Adam Norrodin. The Drive M7 SIC Racing Team rider was able to perform a brilliant start too from 17th place, moving up to second place by the second lap and battling out against the other front runners before crashing out dramatically on the last lap at the final corner.

Broadcast times remains the same as Argentina with Moto3 flagging off at midnight, followed by Moto2 at 1:20am and MotoGP at 3:00am. (All times are on early Monday morning, April 11)