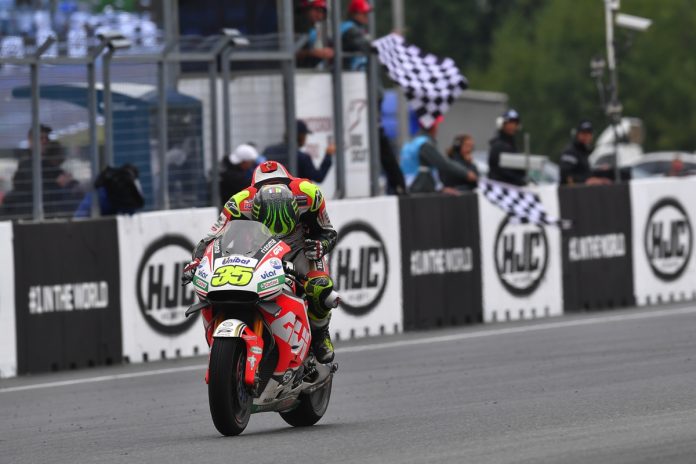 Round 11 of the MotoGP 2016 season got underway last weekend in yet another iconic location for the sport – Brno, Czech Republic. Having started the weekend under clear weather, rain eventually rolled in and reeked havoc on Sunday. 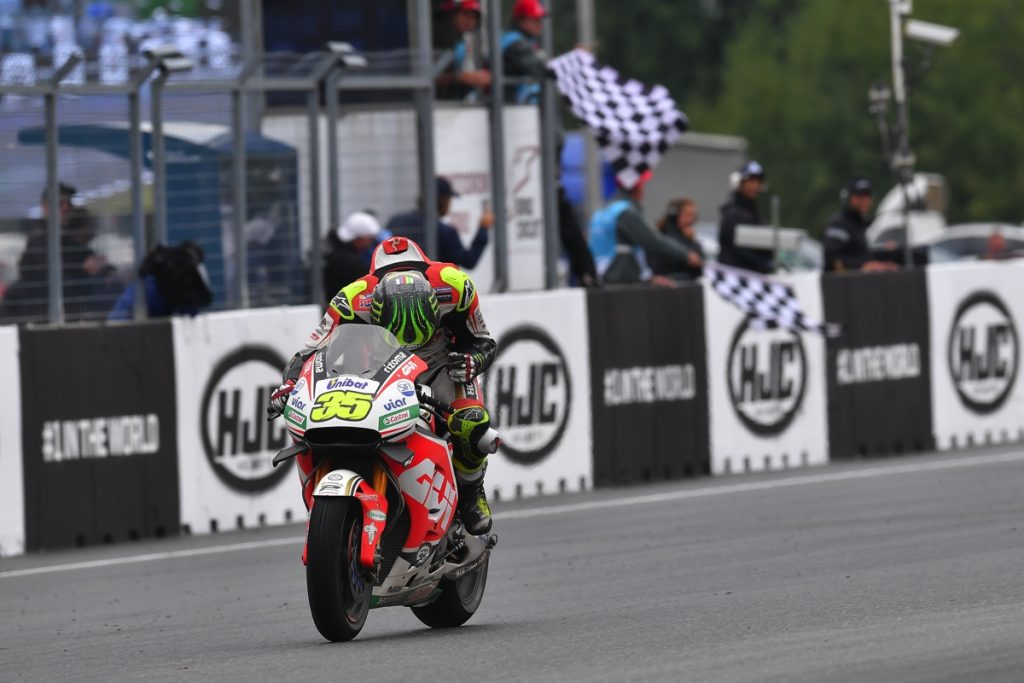 What was initially thought to be a flag-to-flag race didn’t pan out as such, and fortune favoured the two riders that took a huge gamble on their tyres – Valentino Rossi and Cal Crutchlow.

As many of the front-runners, including pole-sitter Marc Marquez, saw their soft compound tyres degrade towards the parts of the race, Rossi and Crutchlow’s gamble on harder compounds paid off. 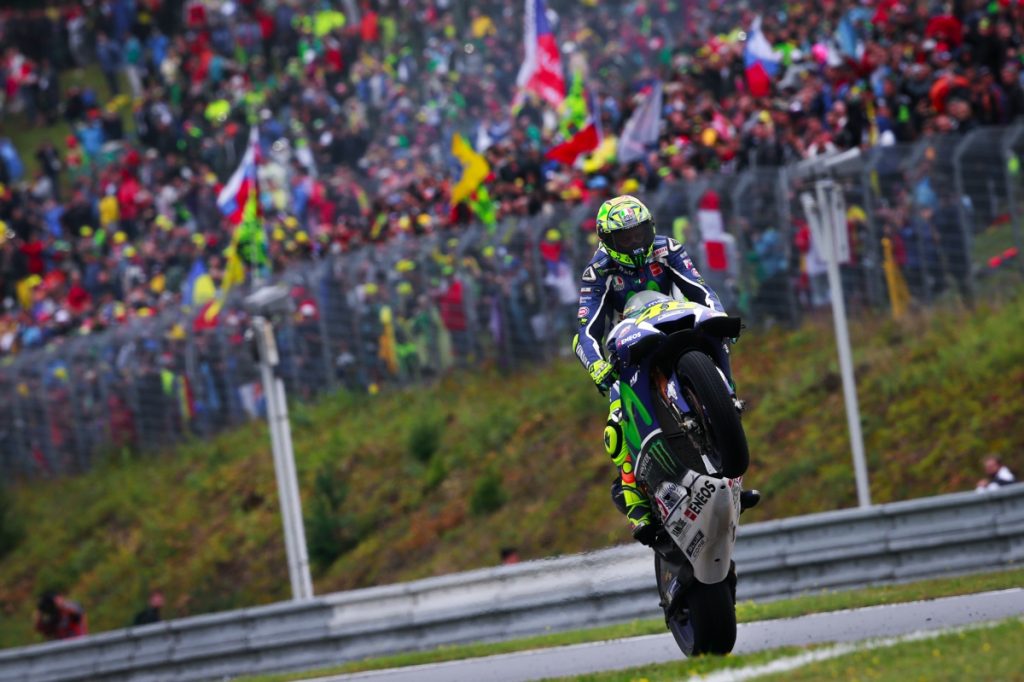 “At first I thought we made a mistake, and I was very desperate. But after the tyres warmed up, I slowly moved up lap by lap,” so said Movistar Yamaha Factory Racing’s Rossi. Despite dropping down the order to 13th early on, Rossi was able to charge up the order after lap 7, finishing the race in second.

Ultimately, the day belonged to LCR Honda’s Cal Crutchlow instead. Starting from 15th on the grid, the Brit opted for the hard compound tyres front and aft of his Honda RC213V satellite machine. It was a gamble that paid off when the front runners faltered as their soft compound tyres began degrading. 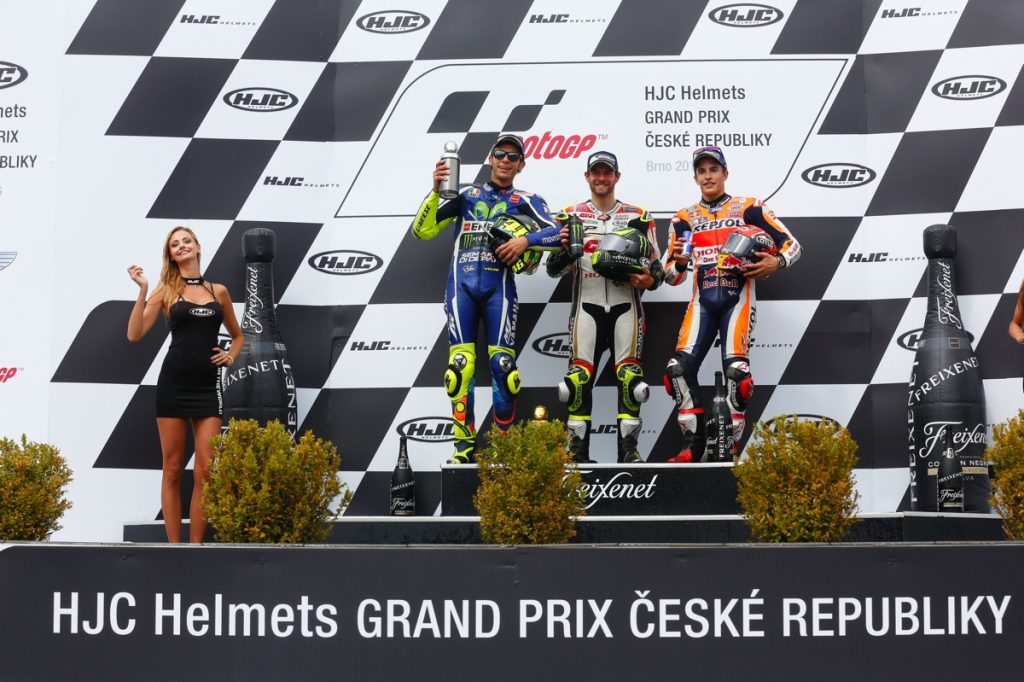 Already chasing the lead group by Lap 12, Crutchlow snatched the race lead on Lap 16 where he stayed until the chequered flag. Crutchlow won with a significant gap of 7.298 seconds ahead of Rossi, becoming the first British rider to score a MotoGP race win since the legendary Barry Sheene in 1981 in fact. 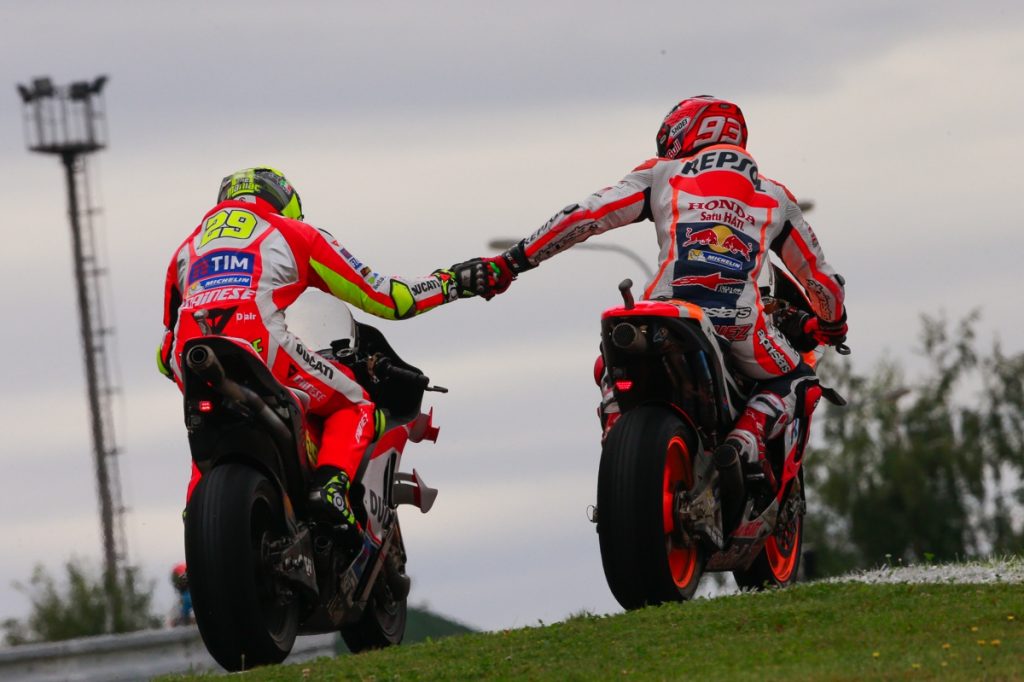 For pole-sitter Marc Marquez, all is not lost for the Repsol Honda factory team rider as he settled for third place. With 197 points, the Spaniard was indeed elated at the fact that he still holds a 53-point lead over Rossi who elevated himself into second. 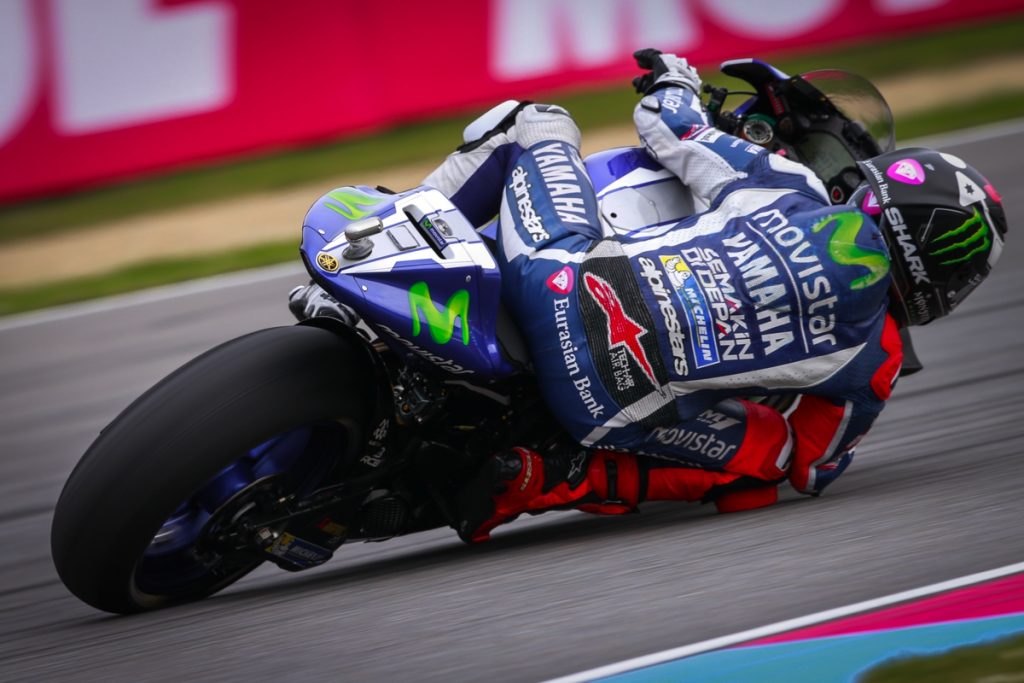 Defending champion Jorge Lorenzo, on the other hand, had a dismal outing in Brno. Having failed to score points here, Lorenzo drops down to third with just 138 points. No doubts, Lorenzo’s title defence looks very bleak for the moment, and Lorenzo might need a small miracle to retain his title. 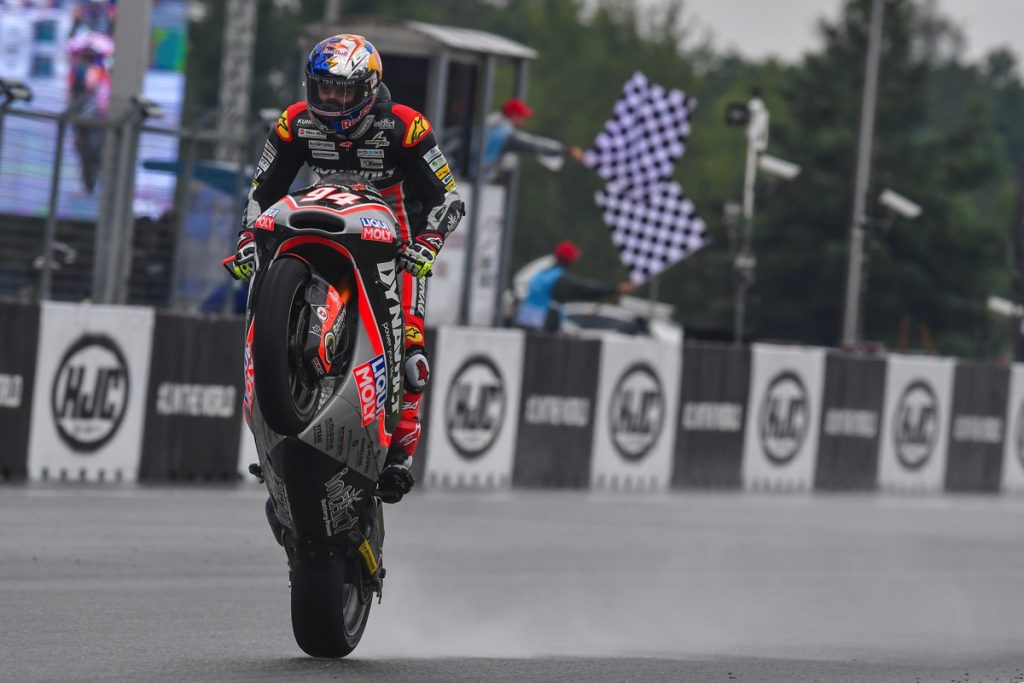 In the supporting Moto2 race, the day belonged to German rider Jonas Folger. The Dynavolt Intact GP rider, along with a few others, capitalised on defending champion Johann Zarco’s struggle to race at Brno under wet conditions.

Putting in a perfect start, Folger commanded the race from start to finish, winning the race with a comfortable 5.175-second gap over second place finisher Alex Rins astride the Paginas Amarillas HP40 team machine. 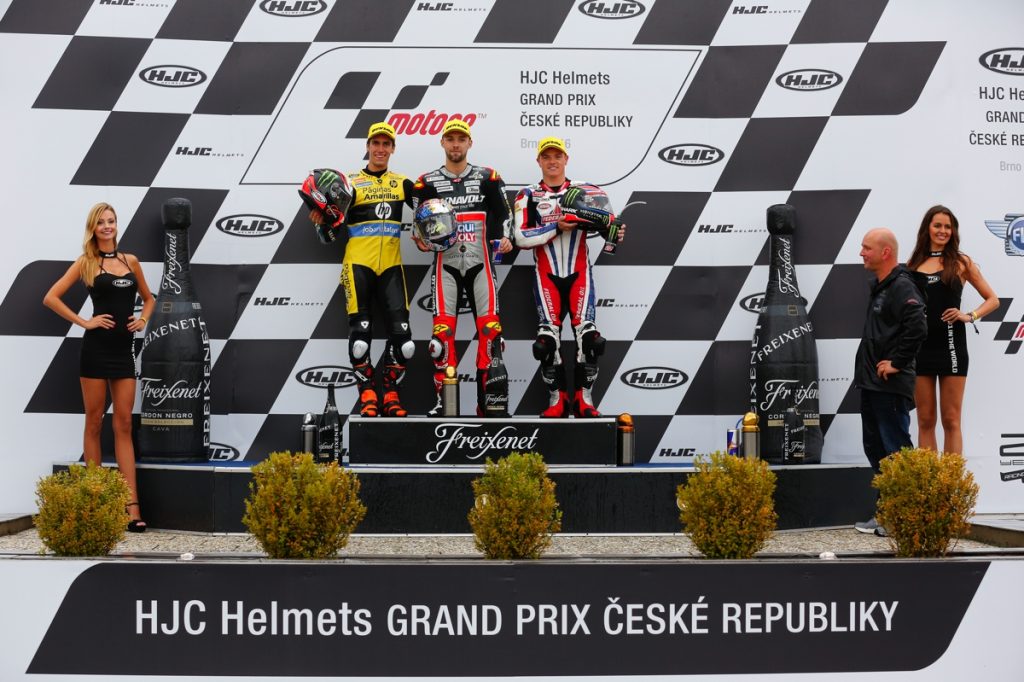 Completing the all-Kalex podium was Sam Lowes as the Brit raced his Federal Gresini Moto2 Team’s machine into third place. Pole-sitter Zarco, on the other hand, could only muster an 11th place finish, but the Ajo Motorsports rider still leads the standings with 181 points. 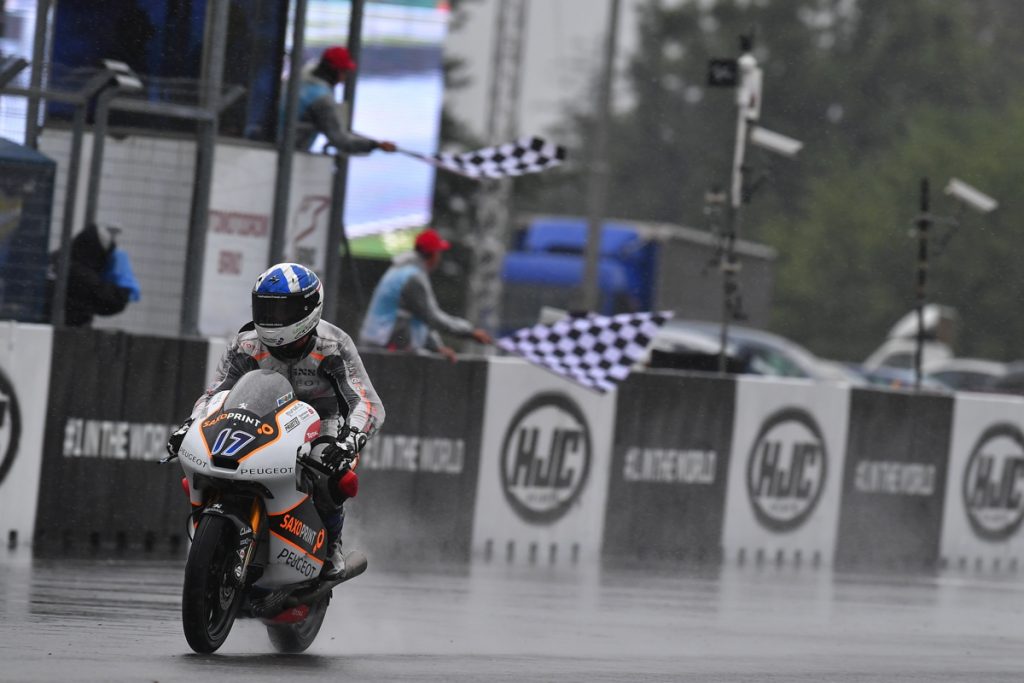 Last but not the least came the first race of the day in the form of the junior Moto3 class. The wet weather conditions initially favoured Malaysian rain mastrer Khairul Idham Pawi. Sadly, the Honda Team Asia rookie pushed a little too hard whilst chasing for a podium finish and crashed out wit five laps left.

Instead, the day belonged to Scot rider John McPhee astride the Peugeot MC Saxoprint machine. Starting from seventh on the grid, John kept calm and cool as he picked his way up the order. He was third by Lap 4, second by Lap 6, eventually taking lead on Lap 15 and won with a comfortable 8.806-second gap. 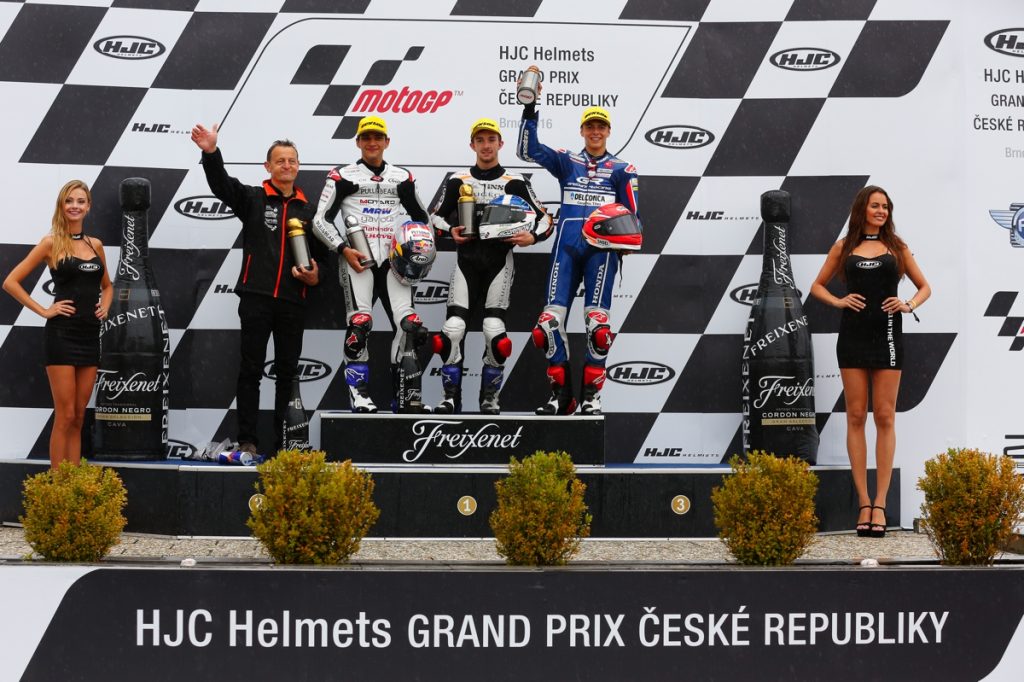 Completing the podium were Jorge Martin astride the Pull & Bear ASPAR Mahindra Team machine in second, followed by Fabio Giannantonio in third astride the Gresini Moto3 Team’s Honda machine. 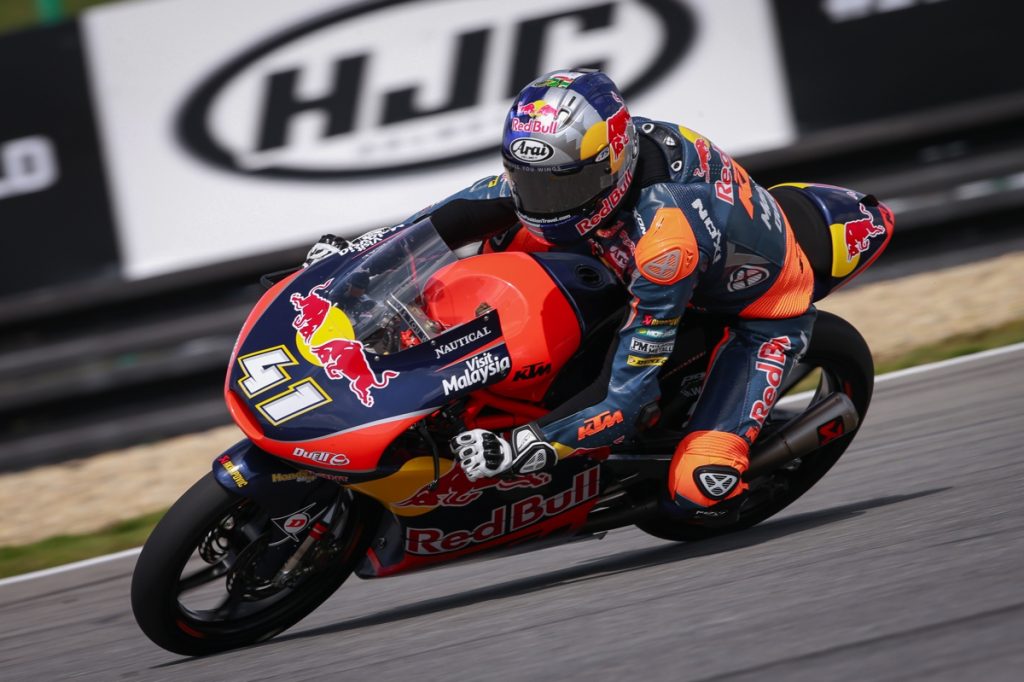 Round 12 – British GP
Round 12 of the 2016 MotoGP championship takes place in the historic Silverstone circuit for the British GP that’s coming up in less than a fortnight’s time from Sept 2 to Sept 4.