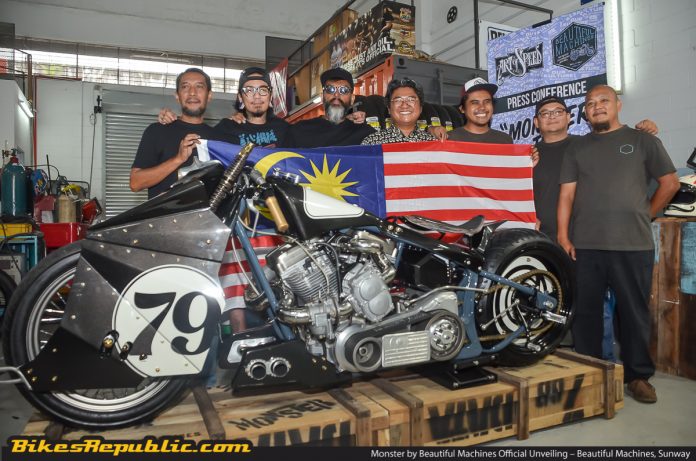 Remember the radical and outrageous custom Harley-Davidson that is Monster by Beautiful Machines? Well today, the Sunway-based team of custom builders has finally completed the bike’s build and is set to make history with it. 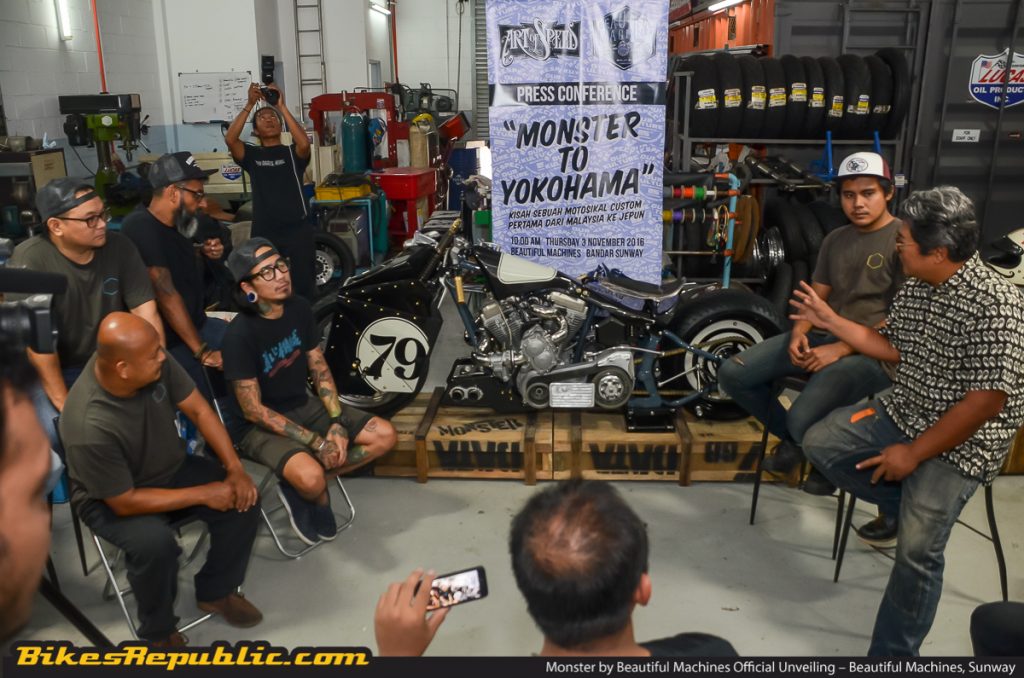 During the official unveiling held earlier today, the Beautiful Machines and Art Of Speed Malaysia team debuted the bike and stated their missions with it. First of which will be Monster’s show debut at the 25th Annual Yokohama Hot Rod Custom Show 2016 in Japan in December. 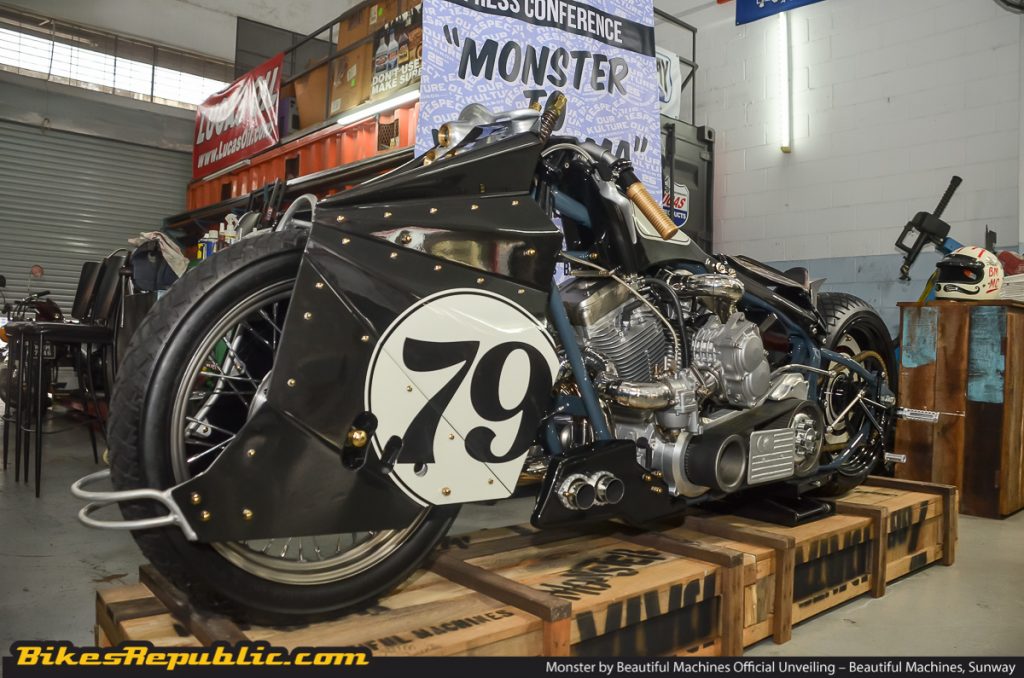 Through Monster, Beautiful Machines will make history as the first Malaysian-based custom bikes outfit to be featured in one of the region’s most prestigious custom vehicles exposition. And the plan doesn’t stop there either. 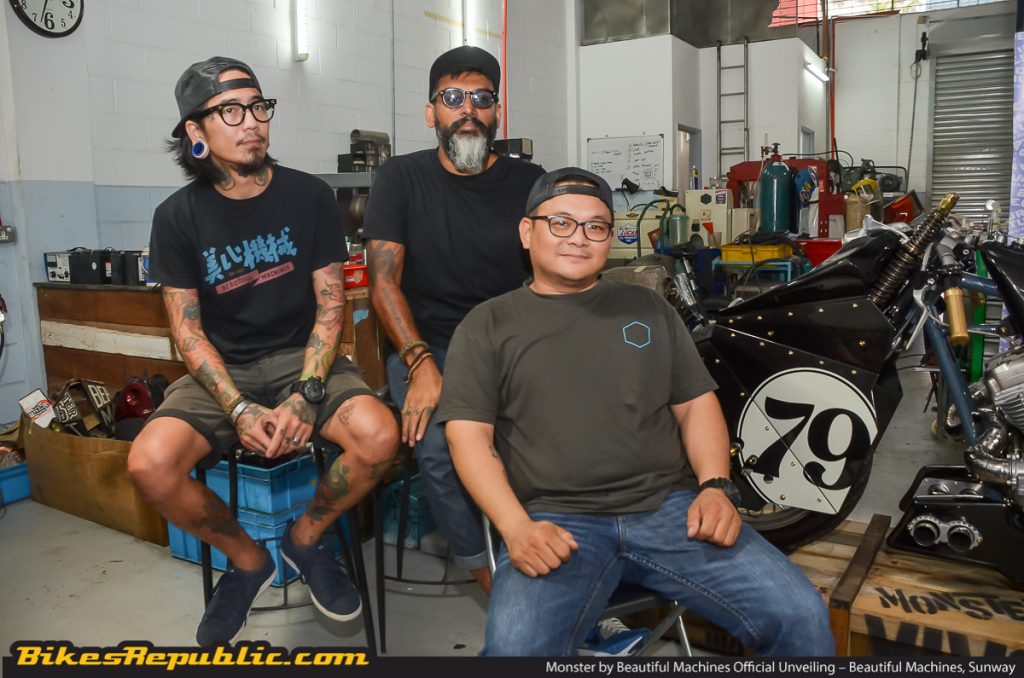 “After putting Monster on display at the show in Japan, our next mission is to take it for a speed record run at the Bonneville Salt Flats next year,” said Beautiful Machine’s owner Rajay Singh during the unveiling. 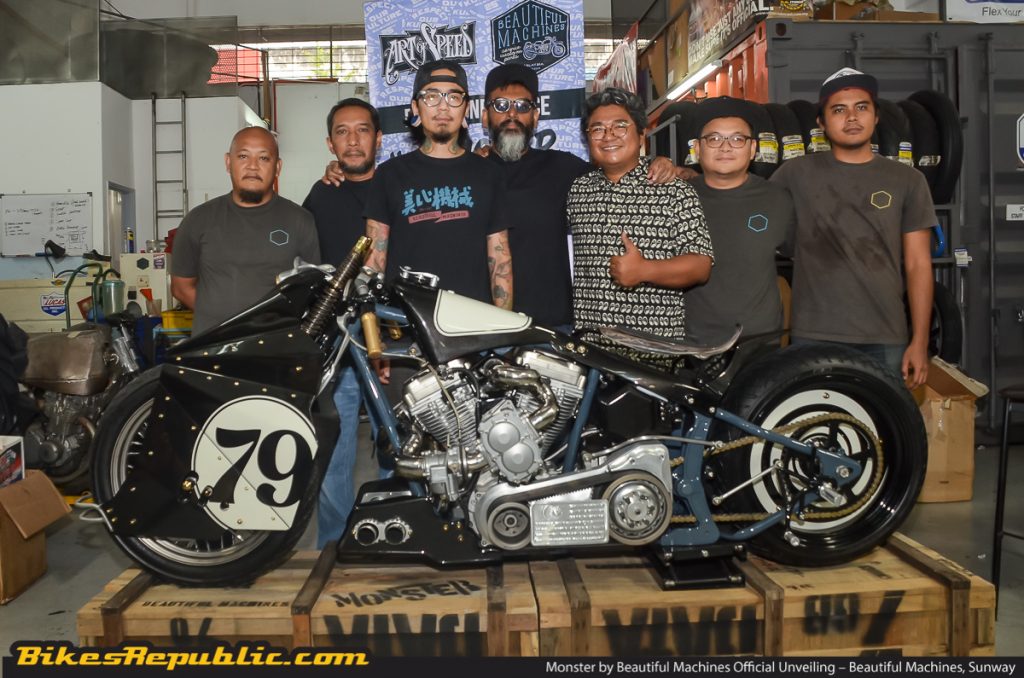 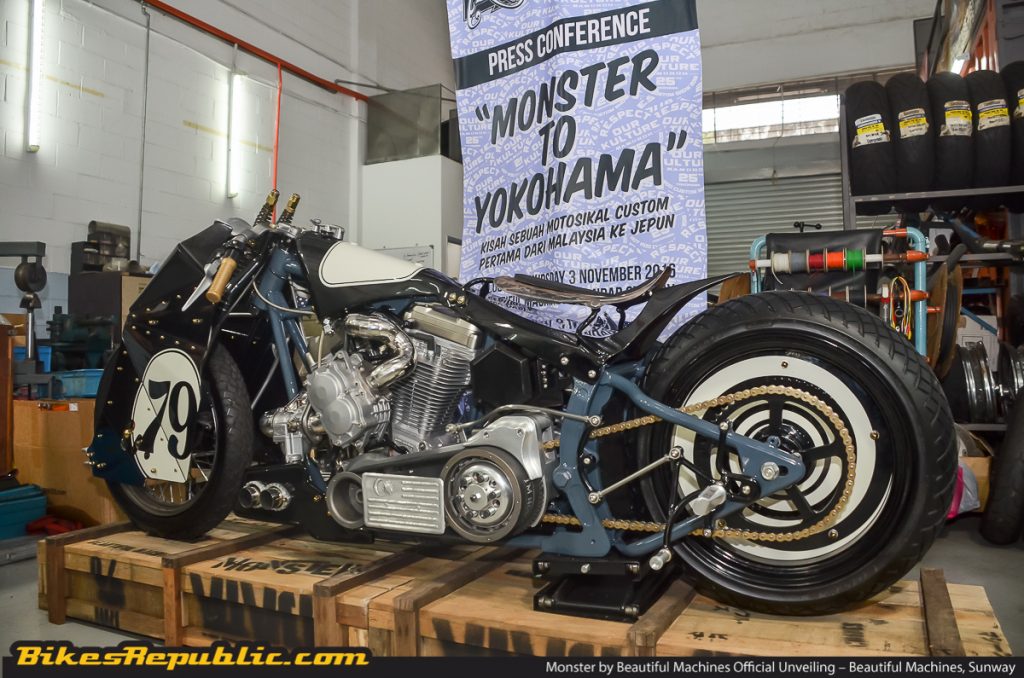 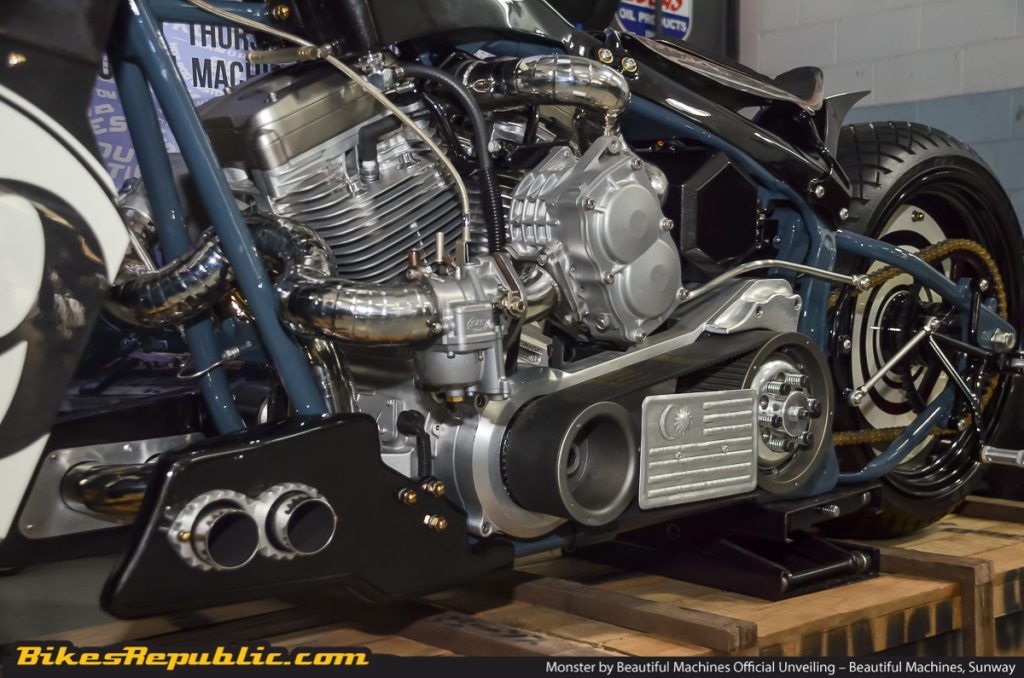 Besides boring out the original V-twin mill, swapping its belt-drive for a custom chain system and extending its wheelbase, Beautiful Machines have also given Monster a racier stance and ergonomics to Monster. The piece-de-resistance however has to be the custom-built and fabricated supercharger system fitted.

You can find out more about Monster by Beautiful Machines in an episode of our video series through the featured video posted above. 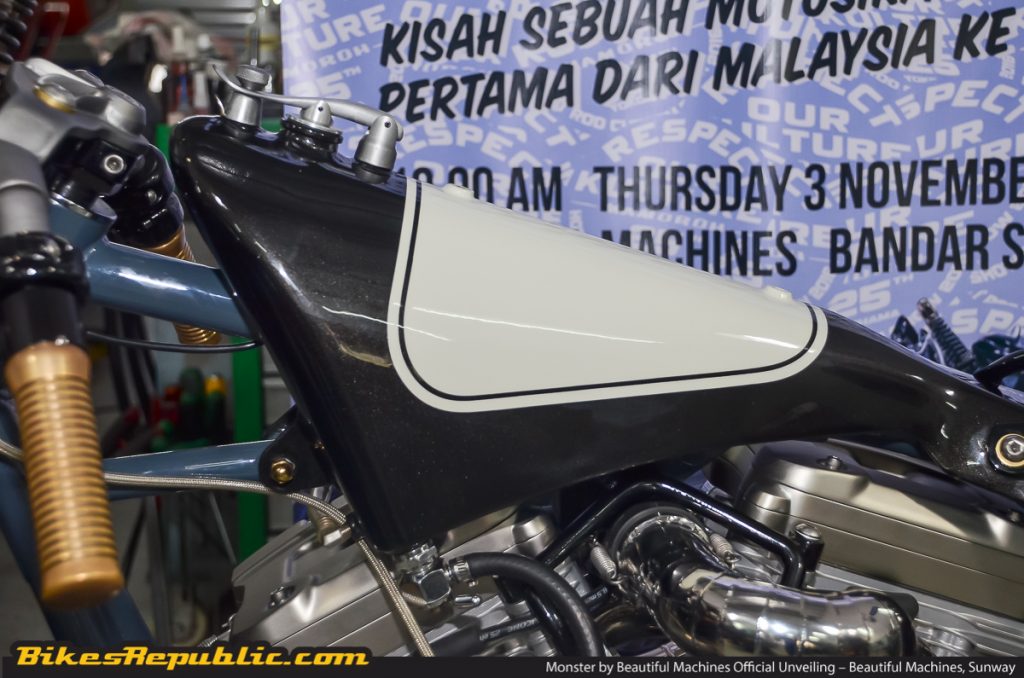 “This is a huge milestone for the local custom vehicles movement. With Monster and the Beautiful Machines team’s efforts, we hope it inspires more young locals to break into this mechanical art movement,” added Art Of Speed Malaysia founder Asep Ahmad during the bike’s presentation. 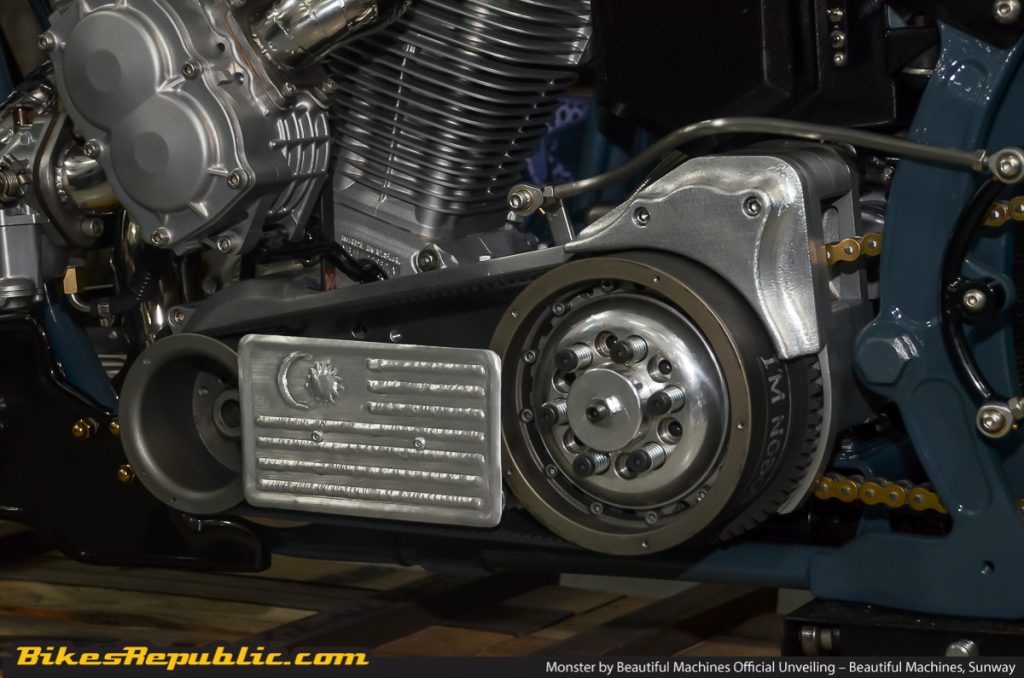 Art Of Speed Malaysia will be bringing a group of 24 participants to support and cheer for Monster by Beautiful Machines come Dec 4 at the 25th Annual Yokohama Hot Rod Custom Show 2016.

As far as hopes as aspirations for the show in Japan, Rajay adds, “A trophy would definitely be a sweet reward but for us, the fact that we will be the first from Malaysia at such a stage is a huge achievement already and we strive to make our local scene proud whilst there.”