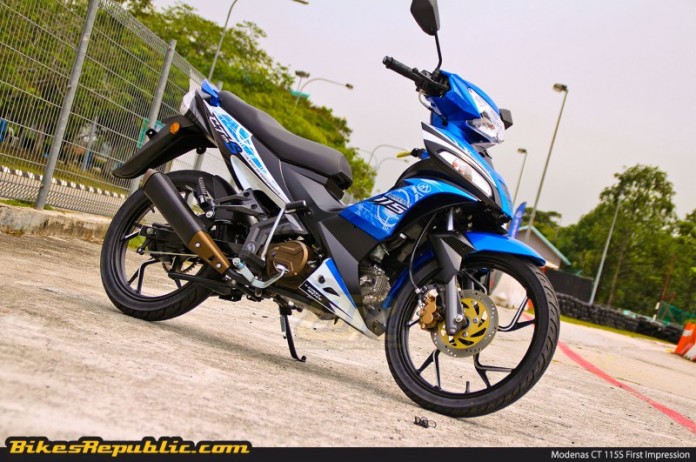 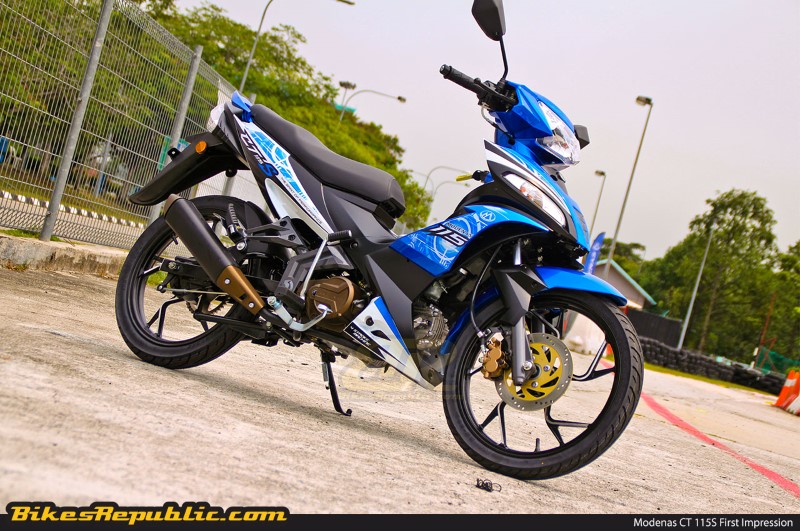 When national motorcycle manufacturer Modenas unveiled the Kriss 110cc underbone in December 1996, it  was off to a good start, becoming one of the most popular four-stroke ‘Kapcai’ motorcycles in a few years. In fact, the model held almost 50 per cent of the market share by the year 2001.

Believe it or not, a total of 99,800 units were sold the year it made its debut itself, thanks to factors like its affordability, reliability, spare parts availability, and also good performance. It’s design was also not too bad for its time. 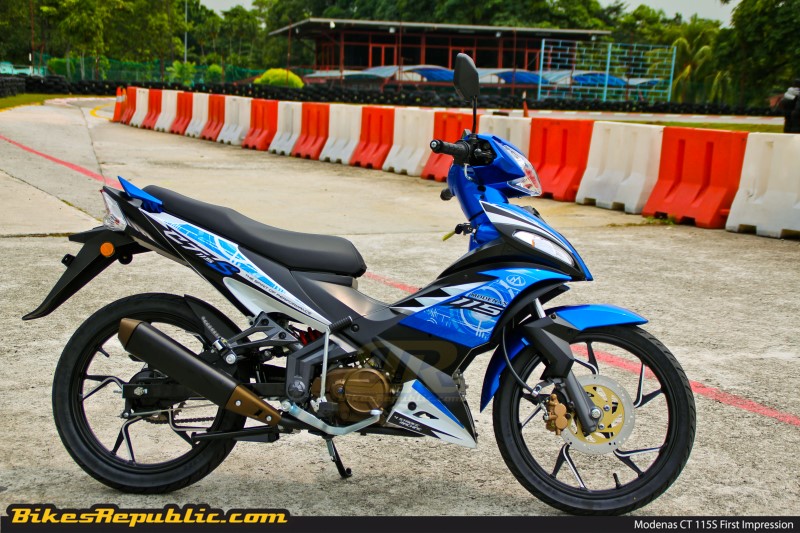 However, after the Kriss was discontinued, things were not looking very promising for Modenas. Almost every model that succeeded the Kriss, including the Kriss SG, Kristar, and the CT Series were unable to replicate the level of success the Kriss achieved.

According to the guys at Modenas’ product planning department, the Kriss’ successors were struggling purely due to the design which was rather traditional. As newer models with scooter-inspired styling cues became all the rage as time went on, younger buyers were going for rivals that looked simply more futuristic. 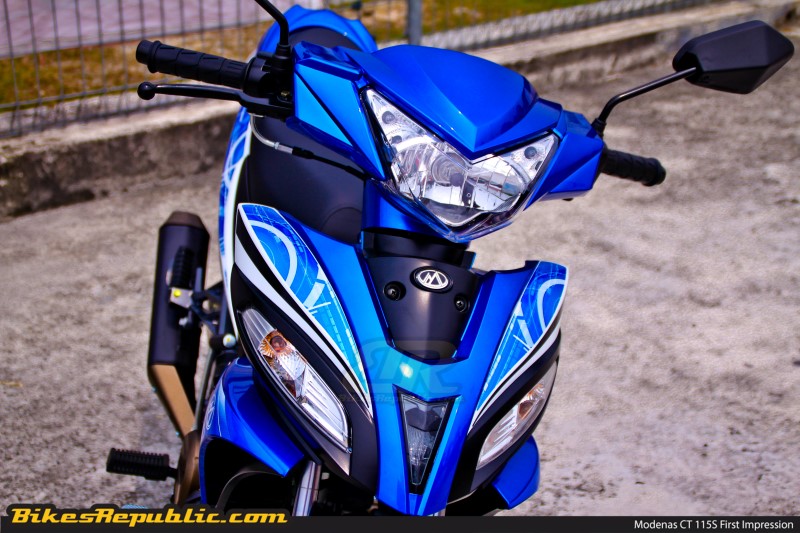 It was not that Modenas bikes were unreliable or they were lacking in the performance department. They were just lacking the visual appeal to attract young bike owners, who make up a majority of the moped market in Malaysia. Realising the change in market trend, the brand introduced the Ace 115 in 2012, which is doing quite well in the market at the moment.

In an effort to keep the momentum going, Modenas has unleashed the CT 115S which will be replacing the CT 100 and CT 110, and we were lucky enough to get our hands on the new model two days after it was unveiled. 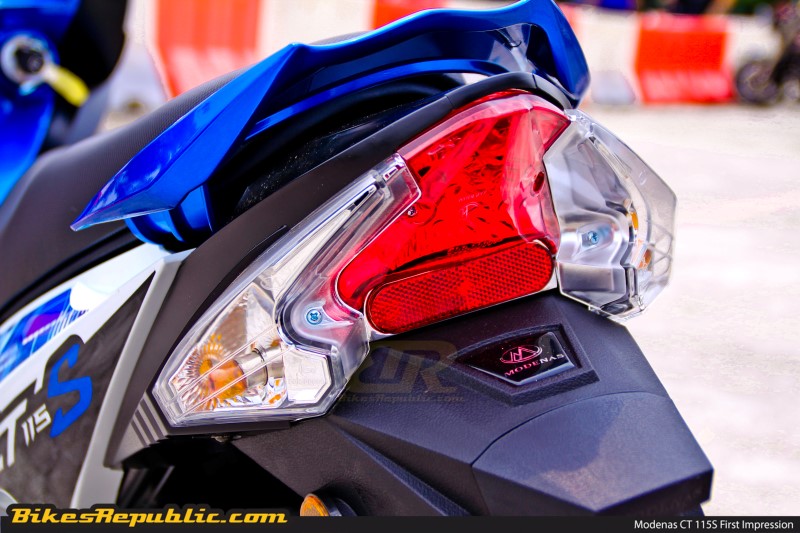 Targeted towards riders aged between 16 and 35 years old, the Modenas CT115S is powered by a 115cc four-stroke, carburetor engine which produces a maximum output of 8.8hp at 9,000rpm and 8.1Nm of peak torque at 5,000rpm. The engine is paired with a four-speed transmission.

Fitted with a 4.8-litre fuel tank, the Modenas CT 115S also comes with a few notable features such as a five-step adjustable Monoshock suspension, a 12V electrical charging socket under the seat for owners to charge devices like smart phones (first in class) , a trailing rear swing arm, front disc brake, and an electric starter. 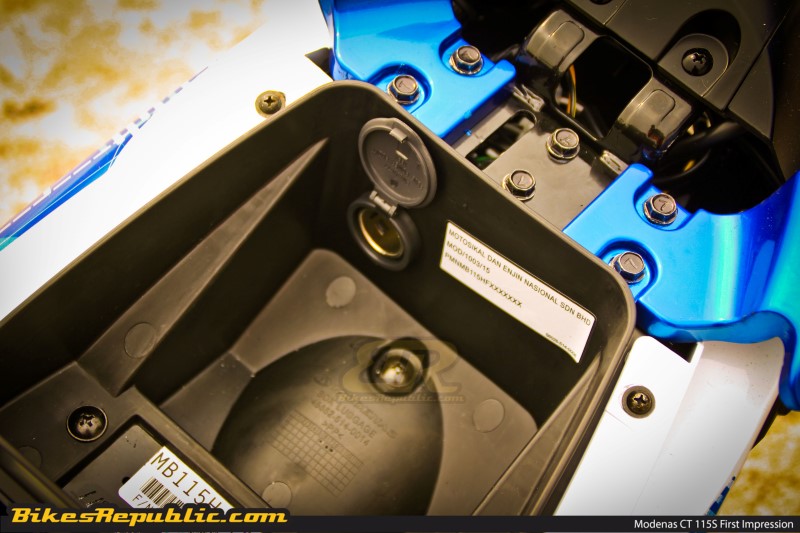 As much as the design of the bike is concerned, Modenas has nailed it with the CT 115S. Built from scratch at the Modenas’ plant in Gurun, Kedah, the CT 115S is basically the sportier variant of the CT range, featuring an improved, more aerodynamic design than the CT 100, which was launched two years ago.  Featuring a sharp, bold and modern design, the CT 115S is arguably the best looking Modenas to roll out of the factory to date. Available in two colours, the bike looked good from any angle we looked at it.

In terms of riding experience, the 115cc engine powering the bike did a good job in delivering power seamlessly, and churned out decent amount of torque. Throughout our stint at the Elite Speedway, never once did the bike showed signs of struggling, even while being ridden by lanky riders. Complementing the smooth engine was the smooth gear-shifting, which added to an enjoyable riding experience. 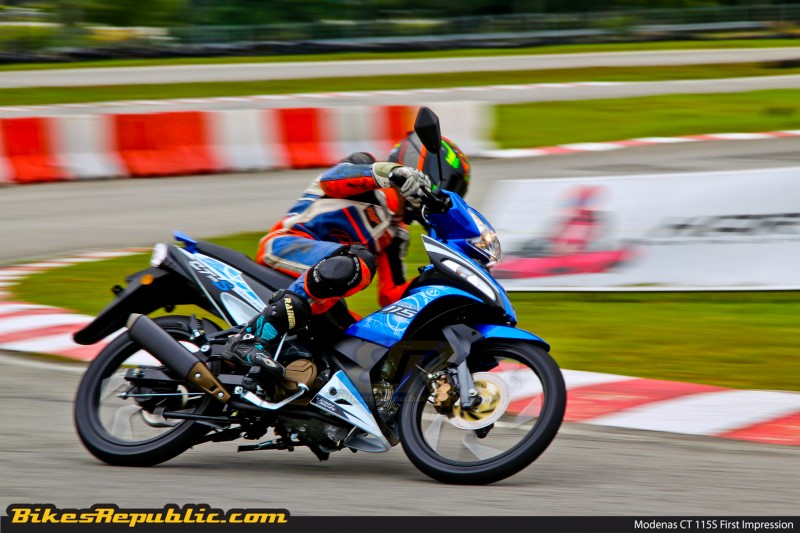 Handling wise, the CT 115S was very agile, allowing us to change directions and manoeuvre it as we wished without breaking a sweat. Even in terms of build quality, Modenas has done a good job as it didn’t feel cheap, and had no unnecessary vibration while riding.

As nice as the CT 115S was, there are a couple of things which could have been better in our opinion. Firstly, the bike’s seat is ideal only for small and medium sized riders. If it was slightly wider, it would be nice for big sized individuals. Besides that, the handlebars could have been positioned slightly higher as well, in order to appeal to taller riders. These minor hiccups aside, things were fine and dandy with the CT  115S. 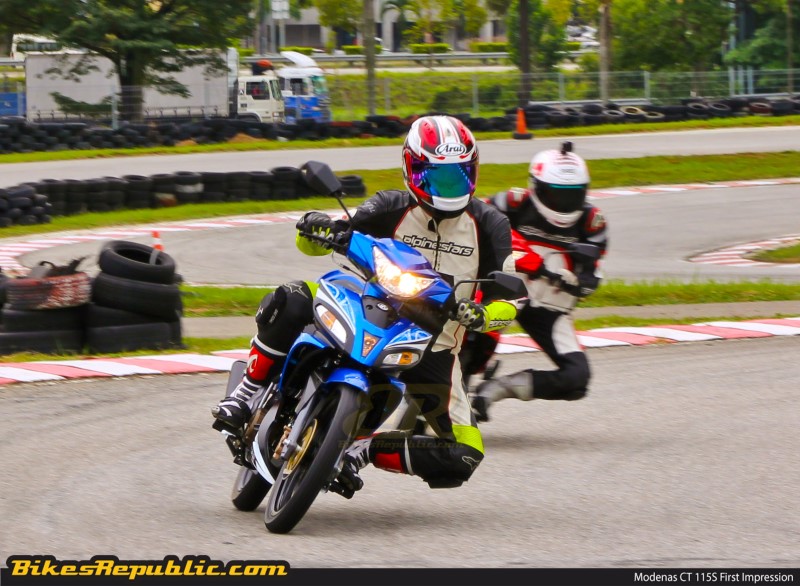 Overall, the CT 115S is a testament to the fact that Modenas is serious about what they are doing, and shows that a lot of thought and effort has gone into the bike. For a product that is 100 per cent Malaysian, it is definitely up there among the Japanese. Besides that, the fact that it costs slightly more than RM5,000 makes it a very attractive proposition, compared to some of its rivals that ask for at least a couple of thousand Ringgits more.