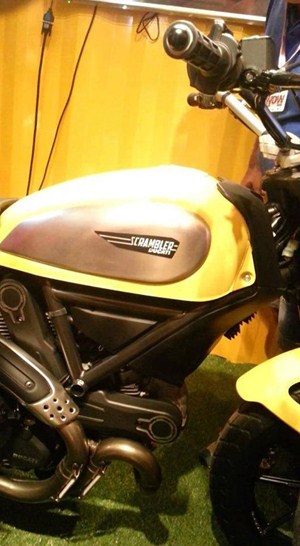 This picture is said to be the new Ducati Scrambler, purportedly leaked when the Italian bike builder showed off its latest model to some fans at the recently concluded World Ducati Week in Italy.

The room in which the Scrambler was revealed was supposed to be a no mobile phone area, but obviously that didn’t work. This shot ultimately emerged at the Ducati Corse unofficial Facebook page.

The is also supposedly the second time the Scrambler has been revealed in yellow, which is a throw back to the classic Ducati Scrambler of the 70s.

It is believed that the new Scrambler will be powered by the V-twin engine from either the Monster 696 or the 796, with around 80hp.

The bike will be revealed at the international motorcycle show in Cologne, Germany.