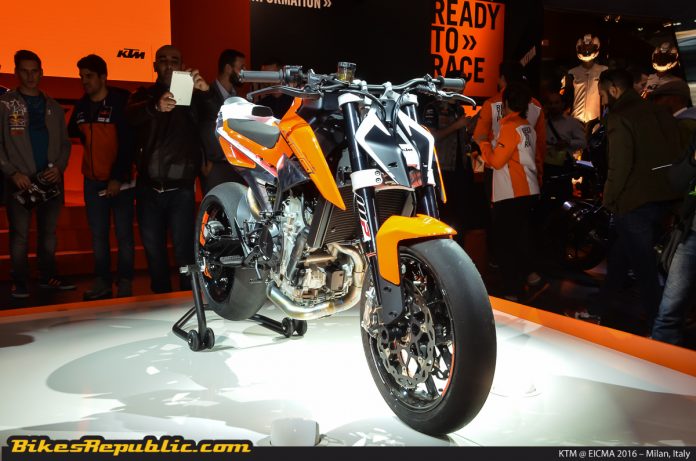 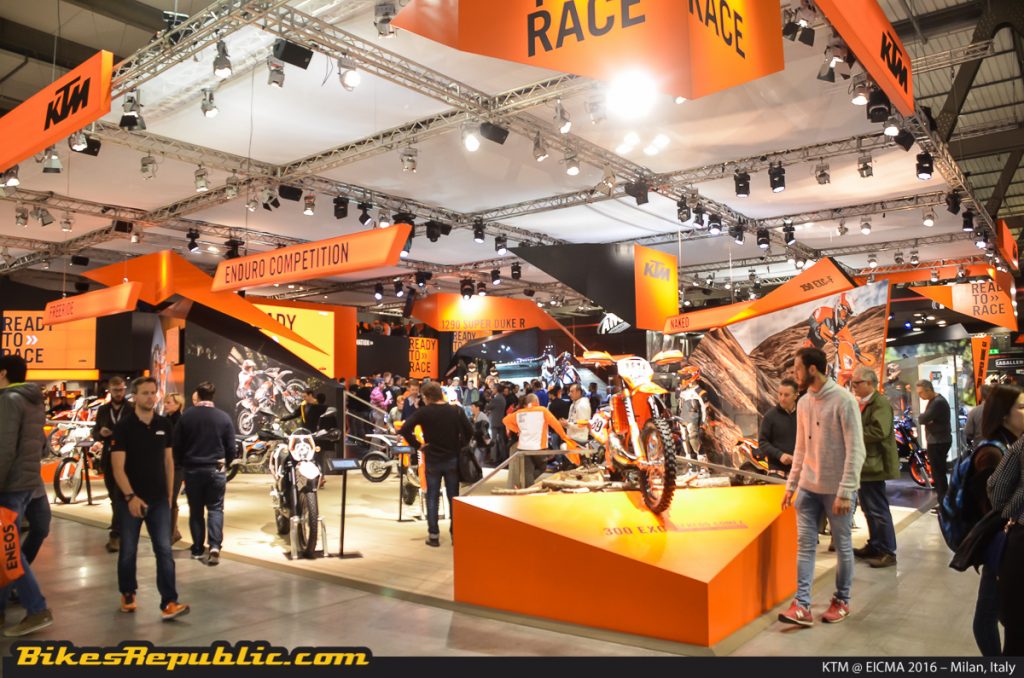 Team Orange was one brand hard to miss at EICMA 2016 not just for its eye-catching tangerine hue, but also for the radical new face of a number of its models. Here are the sights from KTM @ EICMA 2016. 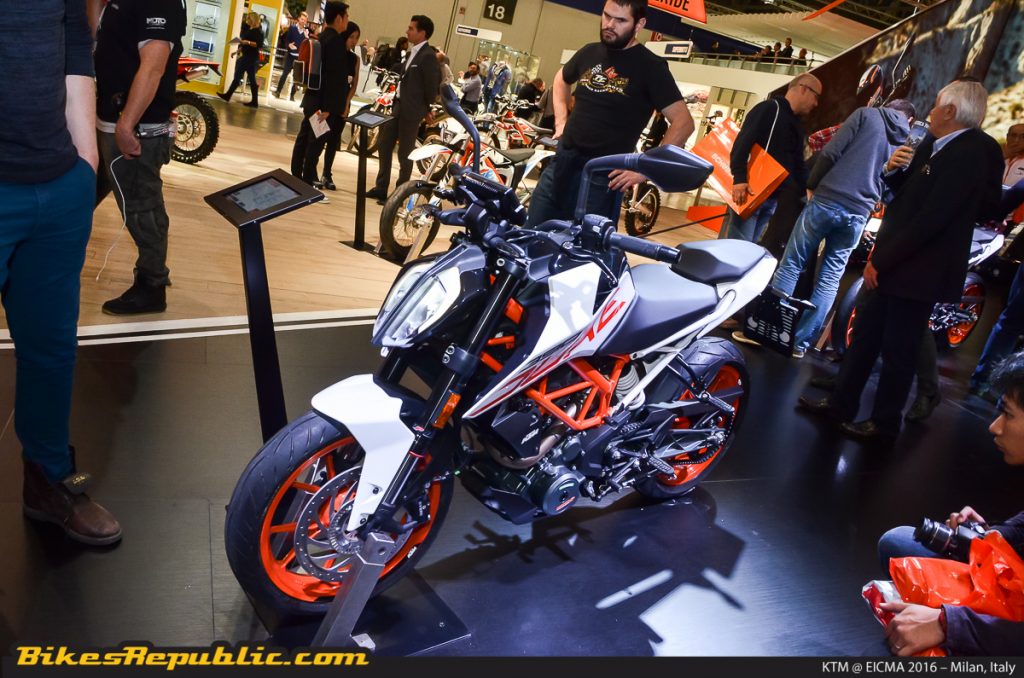 390 Duke
We’ll start with something we’ll see on our shores hopefully soon, the updated 2017 KTM 390 Duke naked bike. True enough, the new ‘face’ KTM teased last week has been applied to a number of models including this pint-sized naked. 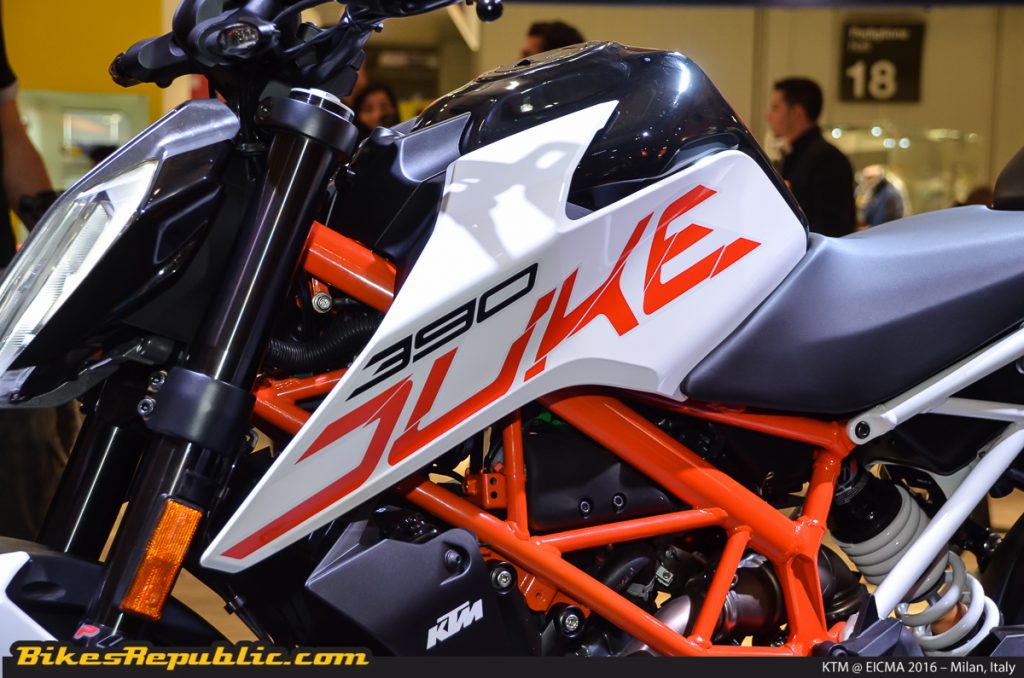 The powertrain is supplemented with a newly added ride-by-wire throttle whilst ABS comes as a standard feature too. The latter is paired with a larger new 320mm single front disc brake. Together with the new WP front forks set plus adjustable clutch and brake levers, KTM promises improved ride and handling. 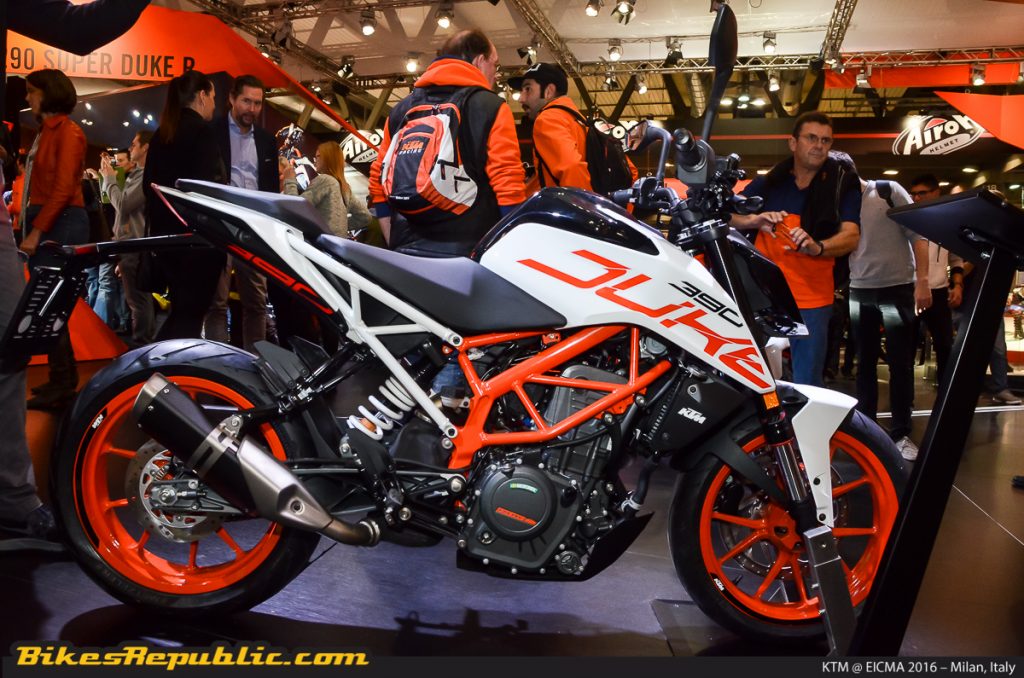 Additionally, the chassis gets a new subframe and sees the 390 Duke gaining a racier stance and ergonomics plus a new split seat design. The facelift is fronted by a new split-LED headlamp design and there’s also a larger new 13.4-litre steel fuel tank in the mix.

Weighing in at 149kg, the lightweight 2017 KTM 390 Duke will continue to offer loads of fun and excitement in its new form. 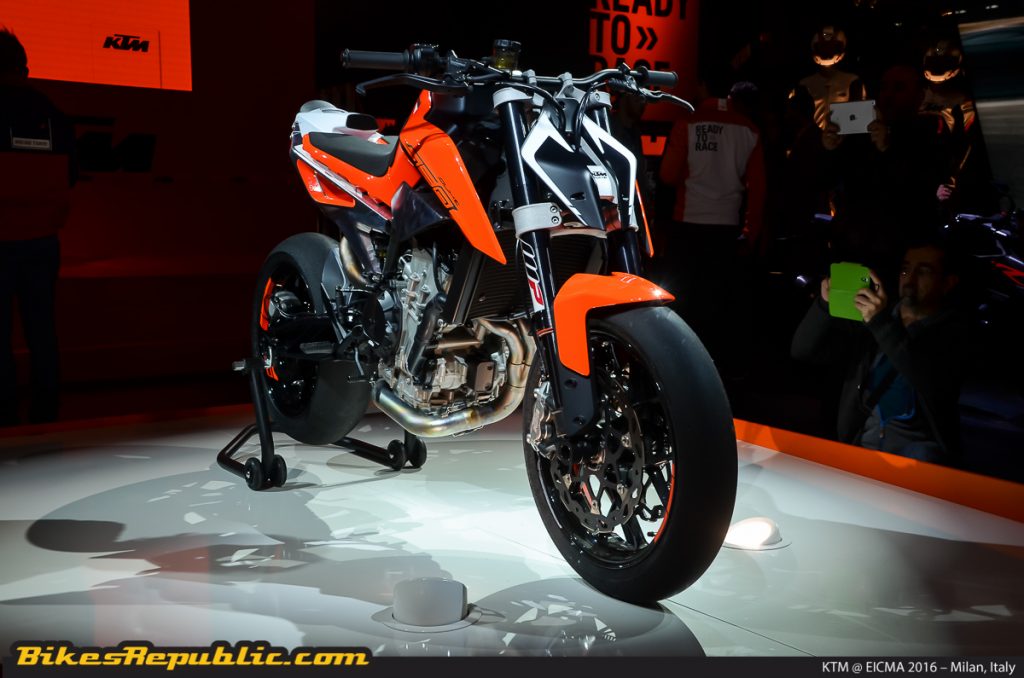 790 Duke Prototype
The next bike that created plenty of buzz for KTM was its 790 Duke prototye. Though a complete and production-ready bike was predicted initially, KTM opted to show off this new model in a race concept form instead, suggesting that its market arrival is scheduled for later. 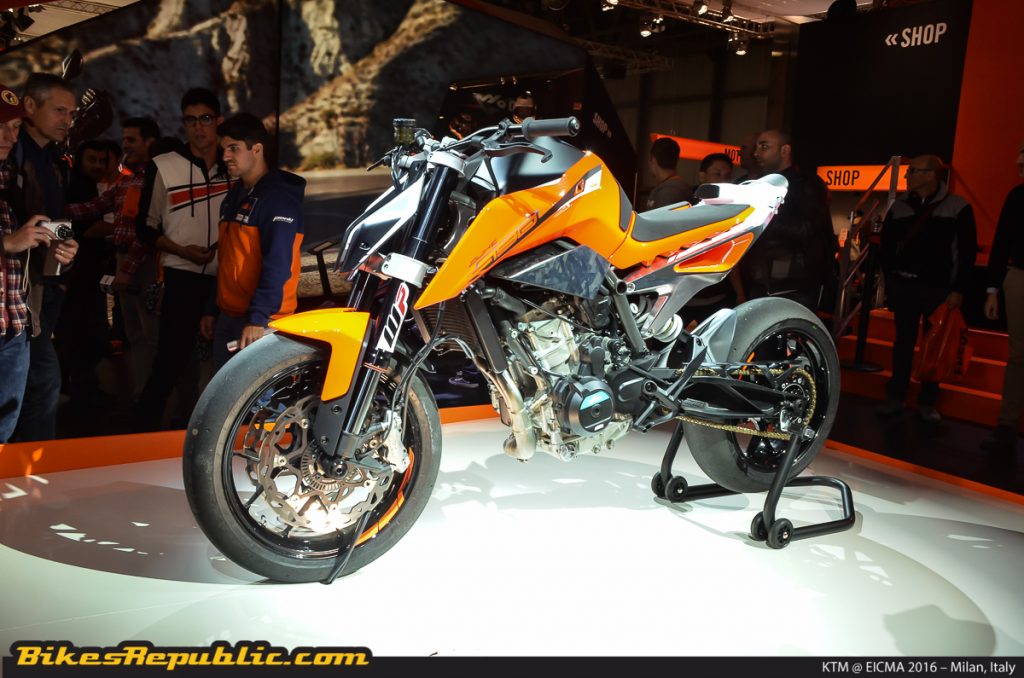 Nevertheless, Team Orange is breaking new grounds with the 790 Duke prototype, particularly with its new LC8c 800cc parallel-twin powerplant – the first of a new family of engines. The eventual production version of the 790 Duke prototype filling the gap between the 690 Duke and 1290 Super Duke R. 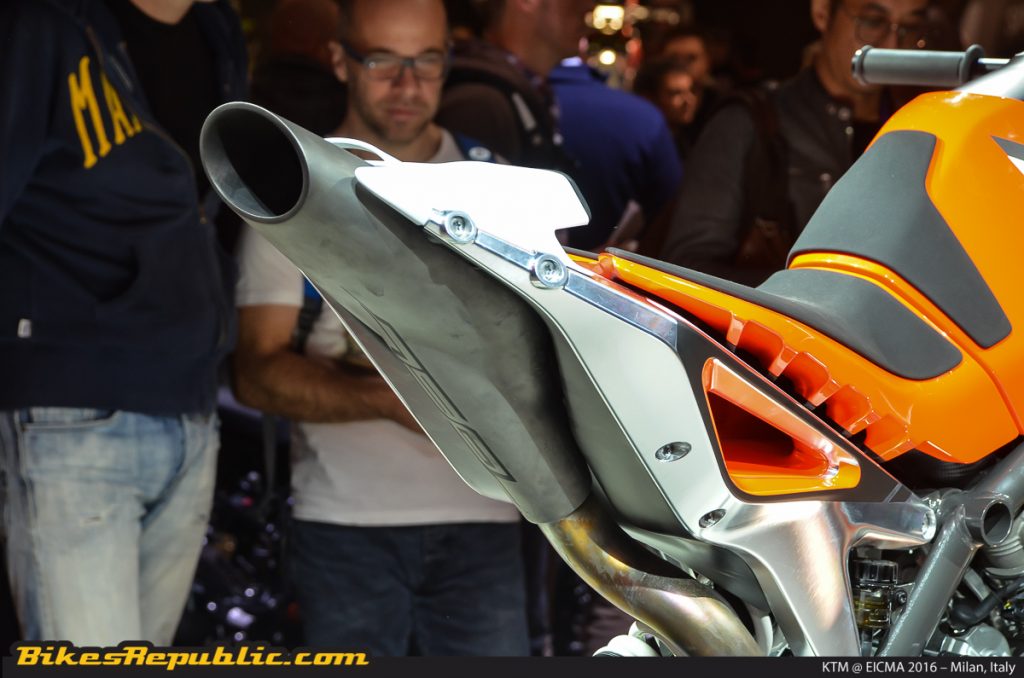 KTM plans to supplement the new powerplant with ride-by-wire, multiple ride modes, multi-level traction control plus enhanced connectivity through its ‘MY RIDE’ suite. KTM targets to introduce the final road-going version of the 790 Duke prototype sometime in 2018. 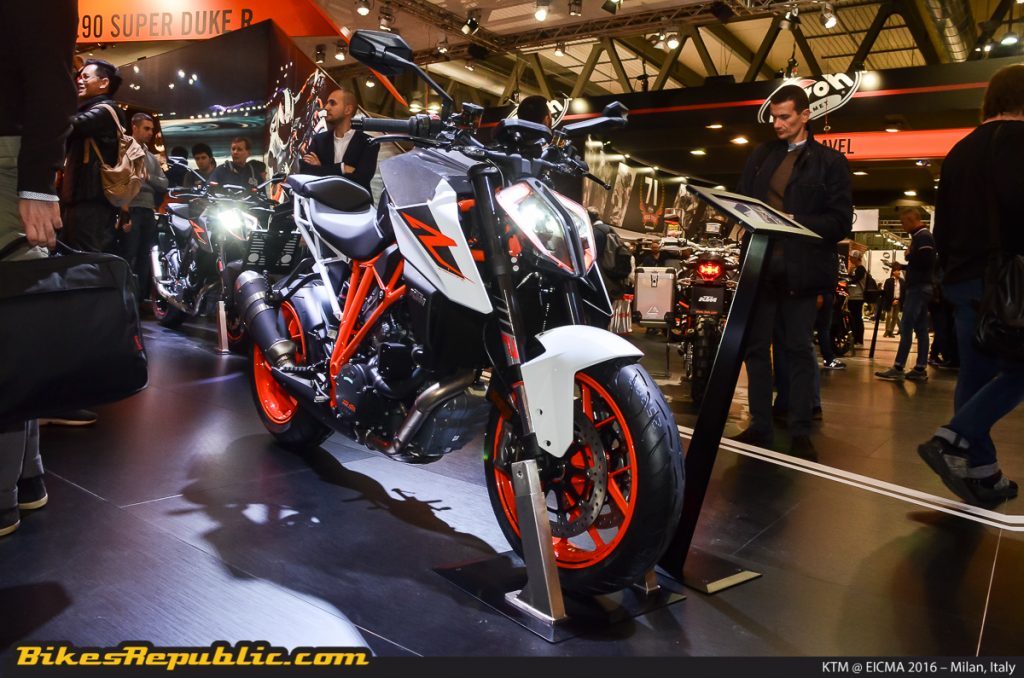 Upgraded 1290 Super Duke R
Having undergone light refreshments last year, the KTM 1290 Super Duke R supernaked has bee upgraded for 2017. The updated LC8 V-twin now pumps out mind-boggling 177hp. This should help even out its 6kg weight gain as it now tips the scale at 195kg. 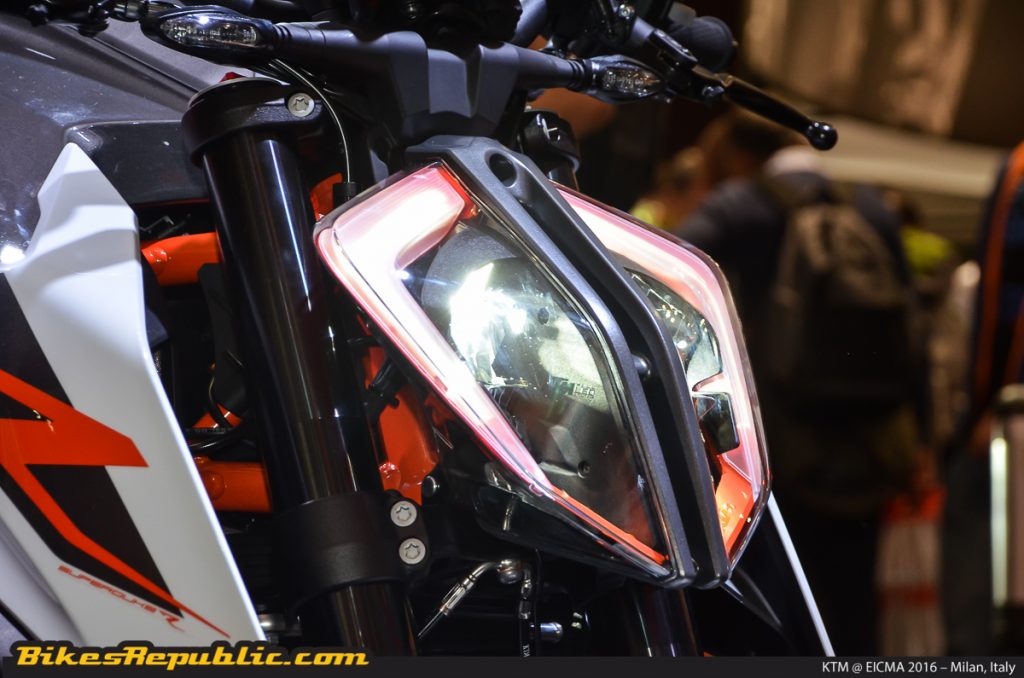 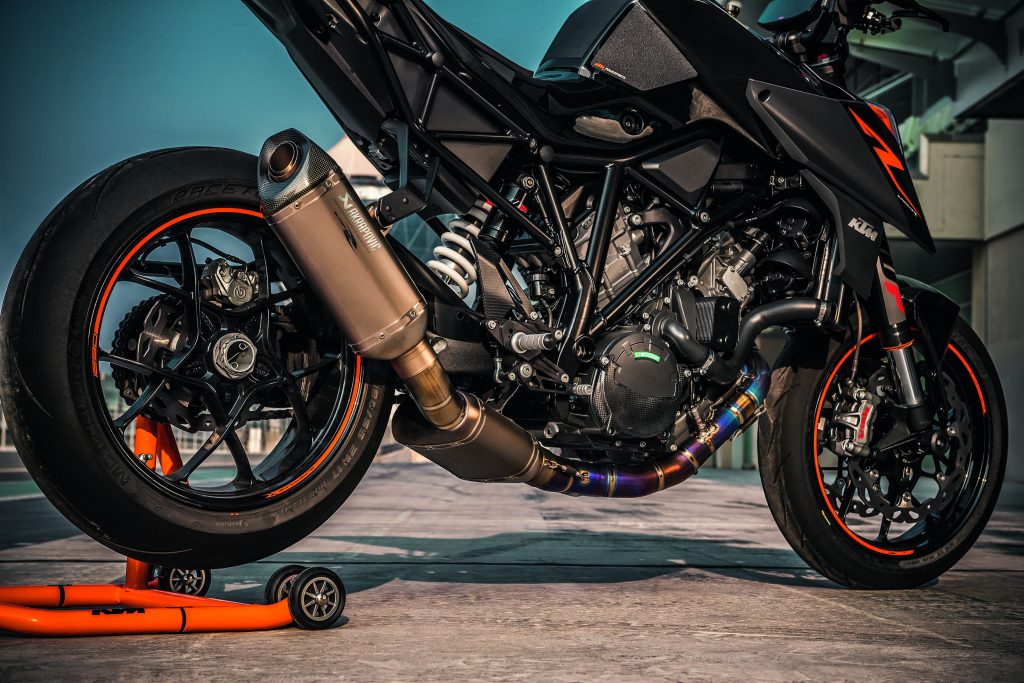 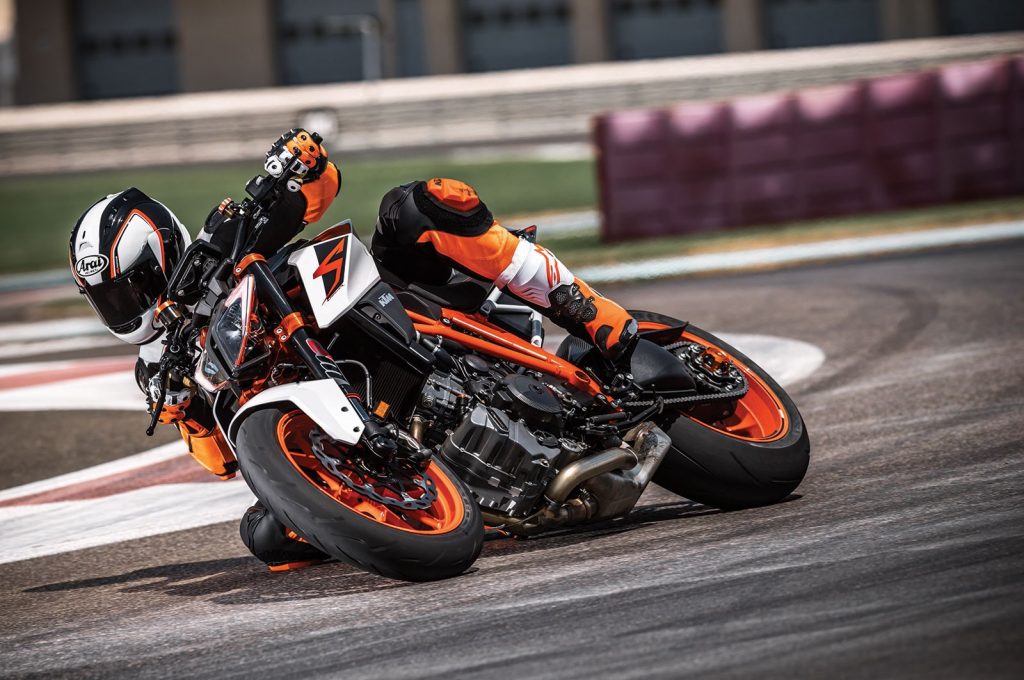 Lastly comes the revised list of optional upgrades. Highlights include Motor Slip Regulation and a quickshifter+ in the Performance pack. The Track pack, on the other hand, adds selectable engine mapping, switchable anti-wheelie, as well as MTC slip control and a launch control function. 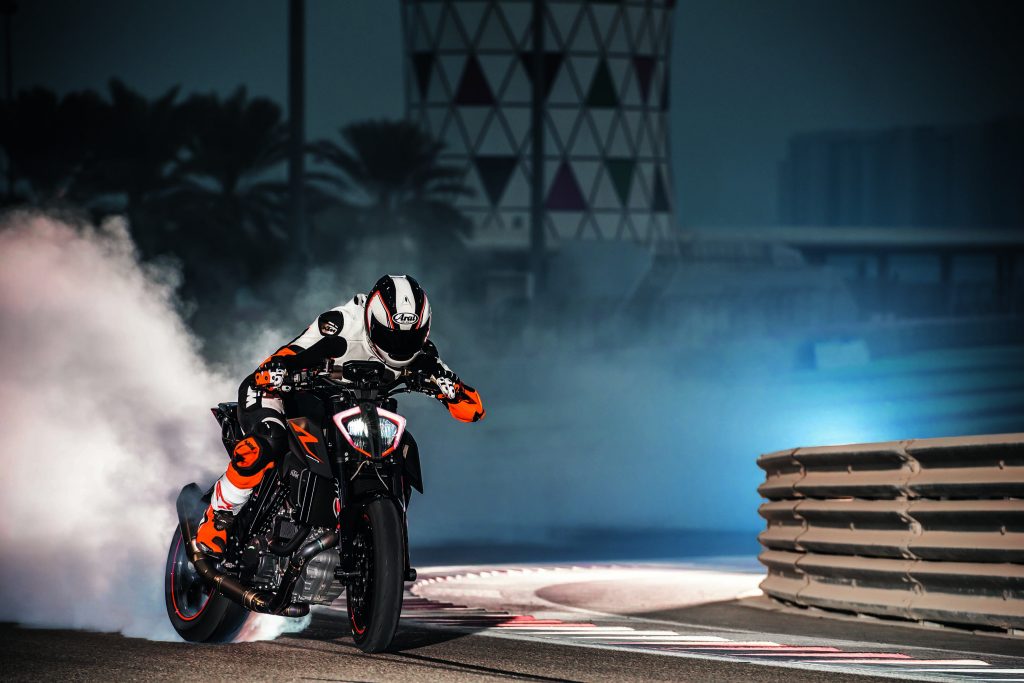 Minus the controversial new face, the orange naked beast that we all know and love has indeed gotten much wilder and smarter at the same time for 2017.