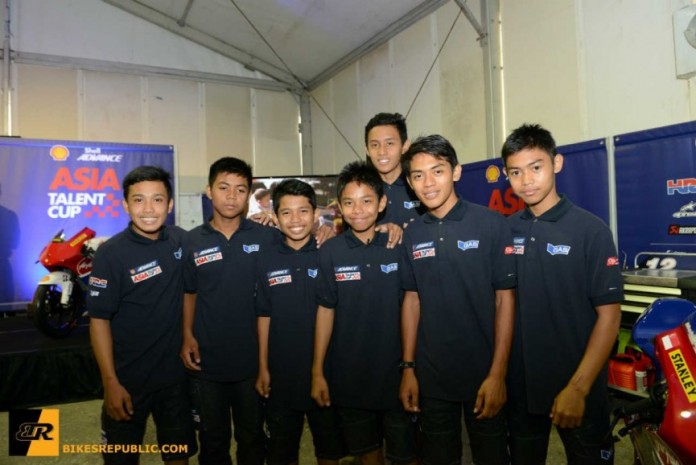 The Shell Advance Asia Talent Cup is an exciting new competition for 2014, which will act as a feeder series to the world of motorcycle racing. The new project aims to give young talents from the Asian region a formal path into competitive road racing.

Led in part by renowned and successful talent scout Alberto Puig, leader of the successful MotoGP™ Academy and responsible for such talents as Casey Stoner and Dani Pedrosa, the competition will see Asia’s stars of the future participate in a eight-race series (in six events) in 2014 on Honda NSF250R Moto3 machines, powered by Shell V-Power racing fuel and lubricated by Shell Advance 4T Ultra motorcycle engine oil.

Run by Dorna, the rights holders of the MotoGP™ World Championship and the FIM Superbike World Championship, as well as co-organiser of the Red Bull MotoGP Rookies Cup, the competition will provide a spotlight for the most talented young riders in Asia.

The 22 talents who made it through the pre-selection event at Malaysia’s Sepang International Circuit in October 2013 will race in Qatar (Losail), Indonesia (Sentul), China (Zhuhai), Japan (Motegi) and Malaysia (Sepang) – on MotoGP race weekends or in independent events.

The season will start in February in Spain (Motorland Aragon) with a four-day test where riders will be able to ride the official Shell Advance Asia Talent Cup Honda NSF250R Moto3 bikes for the first time.

The selection process to decide the grid of the Shell Advance Asia Talent Cup debut season, took place at the Sepang International Circuit in Malaysia last October, with 22 riders chosen to compete on the Honda NSF250R Moto3 bikes in 2014.

Out of all the riders, seven are Malaysians, we spent some time with them at Qatar, and this is what you need to know about them: 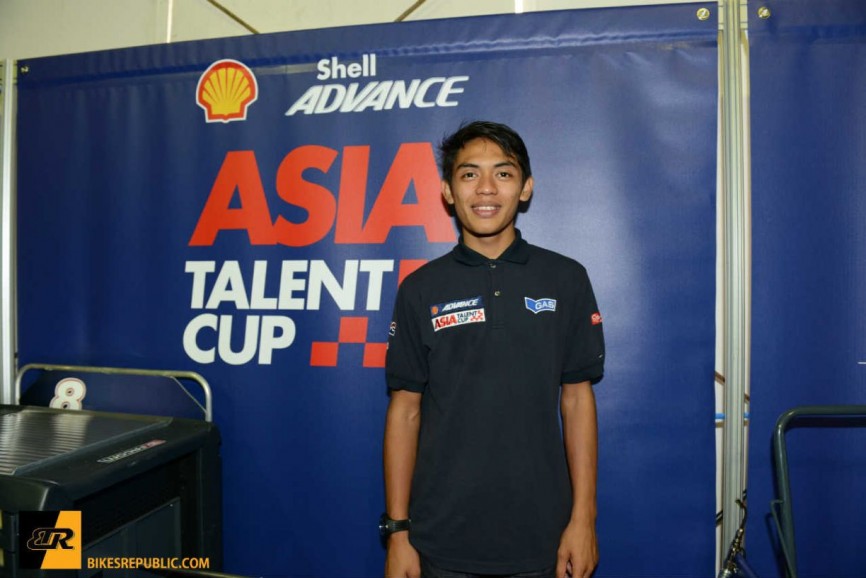 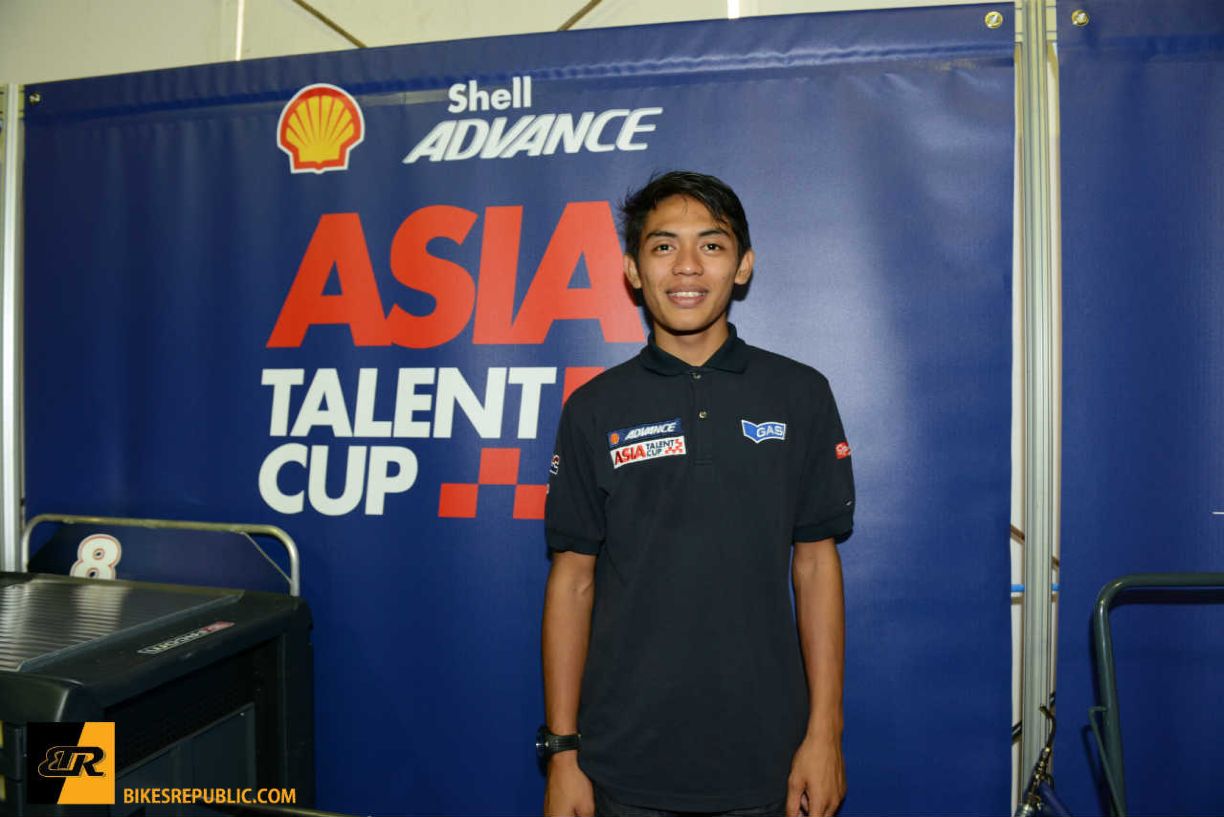 What’s your riding experience?
Not much, just Cub Prix and the Malaysian Super Series.

Why do u want to race?
I have been interested in racing since I was a kid.

Who are your heroes?
Hafizh Shahrin and Marc Marquez

Have you crashed hard?
Yes but I am used to it now. It doesn’t hurt me.

What are your favourite circuits?
Of all the circuits I have been to, I like Sepang the most. 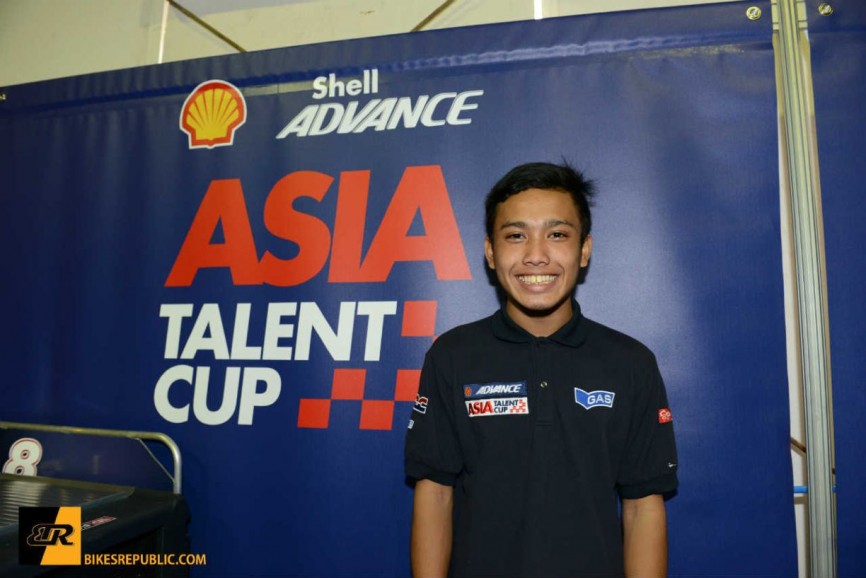 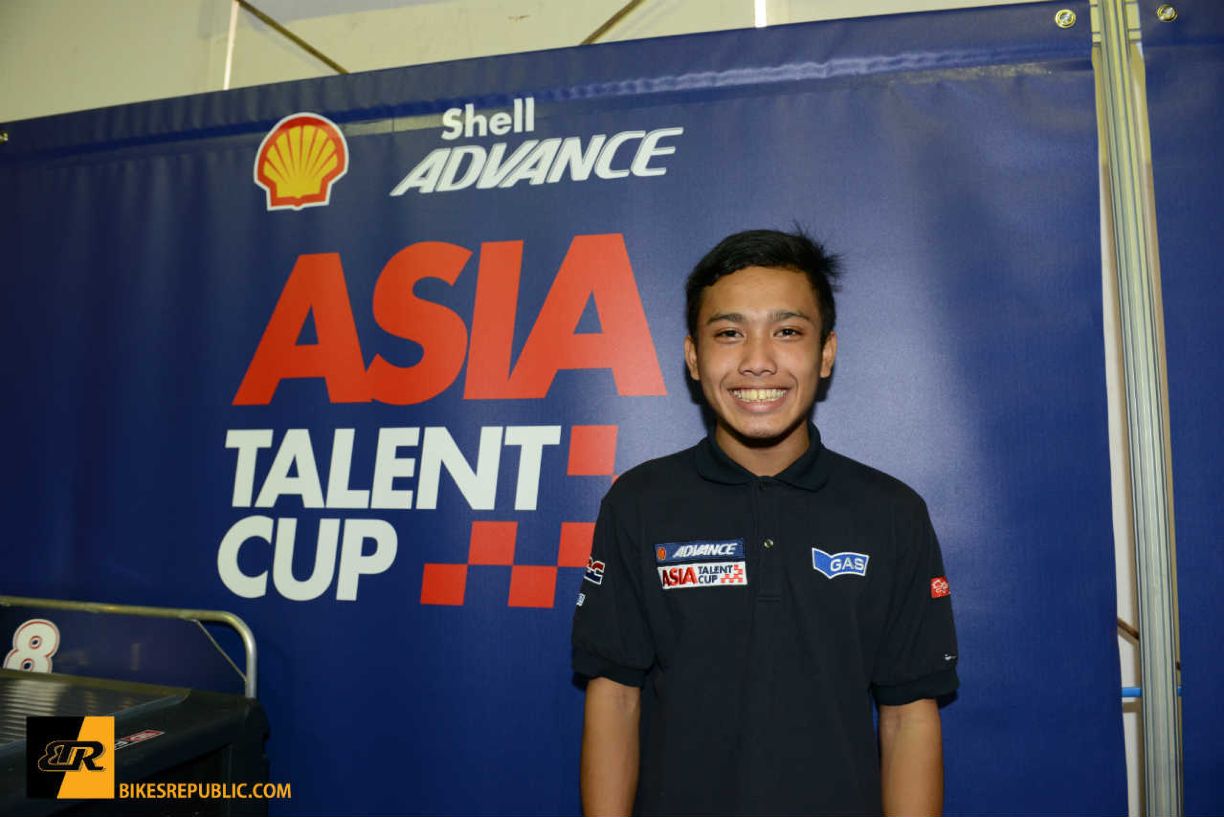 Have you crashed hard?
Yes, many times but I am not scared of crashing so it doesn’t hinder me.

What’s your favourite circuit?
It has to be Sepang, I love the challenge and it is my home circuit.

Who are your heroes?
Rossi and Zambri Barbe. 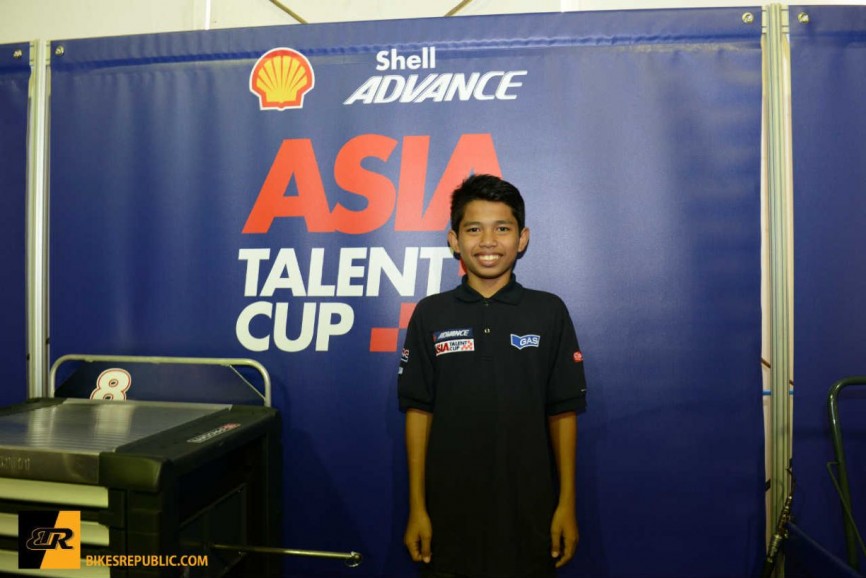 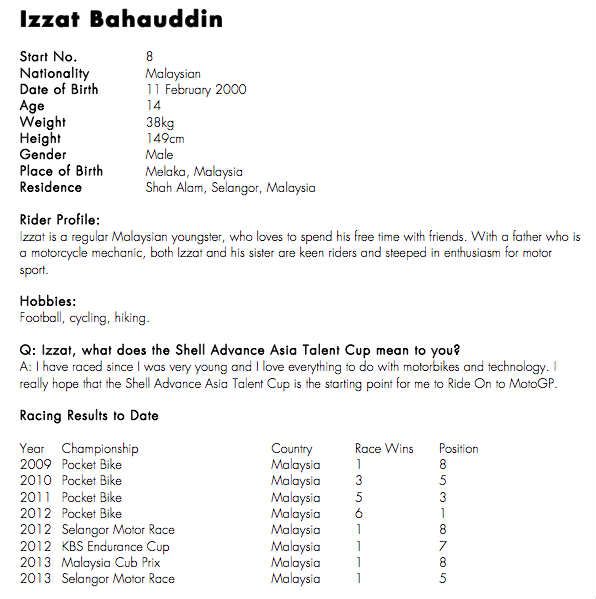 Why do u want to race?
I have a lot of interest in racing from younger, and want to make it to motogp

Who are your heroes?
Valentino Rossi, Afiq Azmi, and Zulfahmi Khairuddin

What’s your ridding experience?
Not much, just with pocket bikes and some races at cub prix.

Have you crashed hard?
Yes, I fell hard at Spain and Sepang.

Is the crash going to deter you?
Well I twisted my ankle and such but I am not scared. I am not going to let it deter me from achieving my dream. 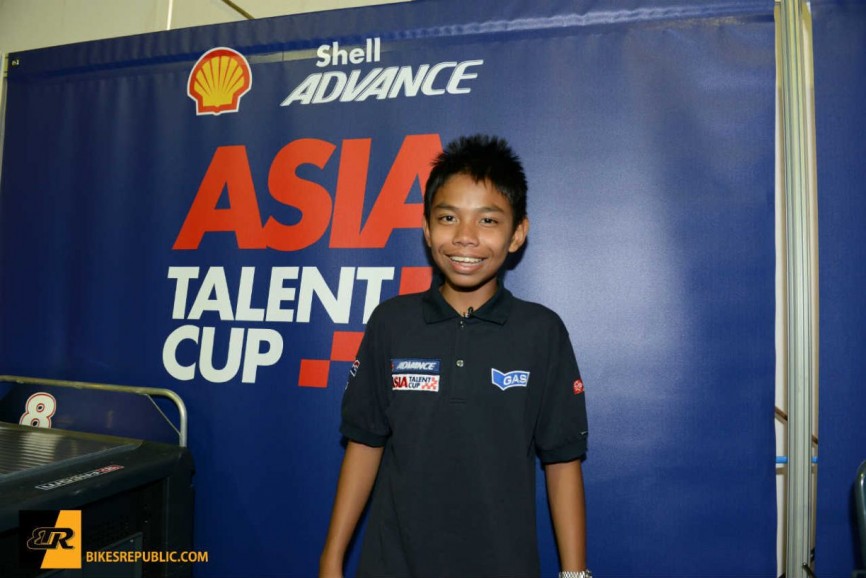 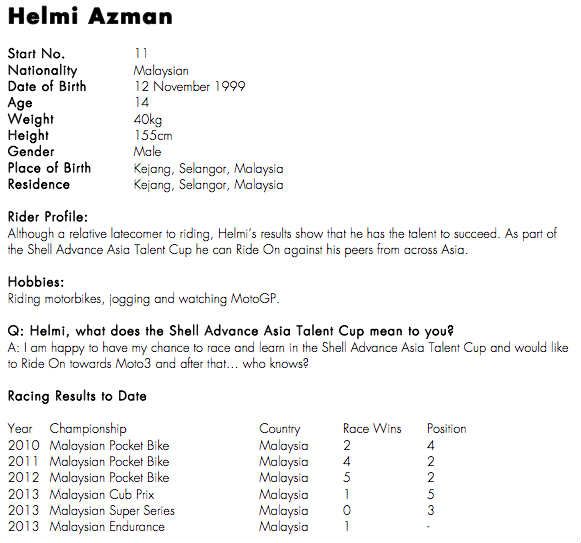 What is your riding experience?
So far I have only done Cub Prix.

Why do you want to race?
It is my interest and dream since I was a young boy. I love bikes.

Have you crashed?
Yes I crashed hard a few times during races but I have almost always got up and raced again.

What’s your favourite circuit?
Aragon, Spain. I fell there too.

What’s your plans next?
I am focused on getting up to MotoGP hopefully. 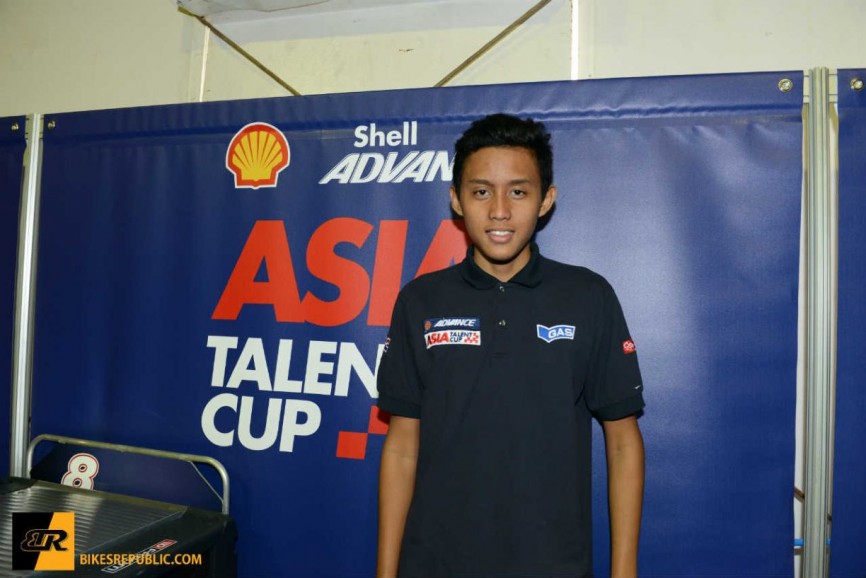 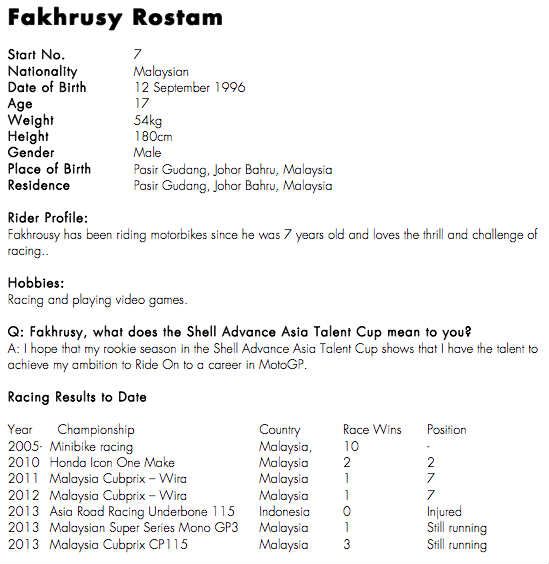 What is your riding experience?
I started off with pocket bikes when I was 7 and in 2012 I started Cub Prix and MSS in 2013

Have you crashed hard?
Yes many times so I am not worried about that.

Who are your heroes?
At SAATC it has to be the Japanese riders. And I have no heroes in MotoGP but Adam Nordin as my local hero.

What are your inspirations?
I want to train even harder than what I do now and make it to the top of saatc now. 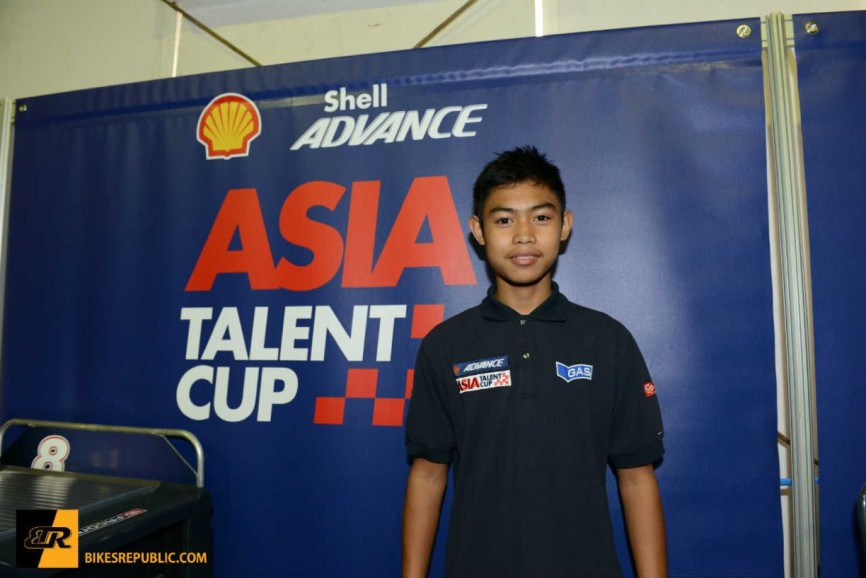 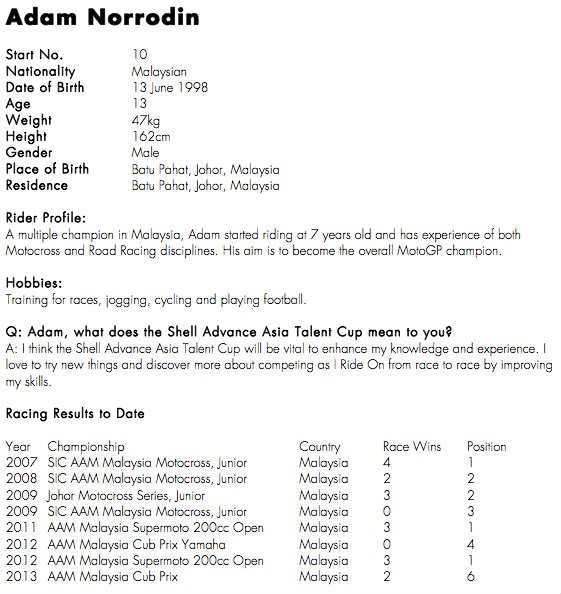 What is your riding experience?
I started from Motocross, then went to racing Motards then ended up at Cub Prix and now I am here.

Have you crashed hard?
Yes I crashed quite hard at Aragon, Spain

Is that stopping you from pushing hard?
I think it is quite normal to crash.

Who are your heroes?
Zulfahmi and Marc Marques, I have followed him from young.

What are your inspirations?
I want to make it to Moto3 and take it one step at a time from there onwards. 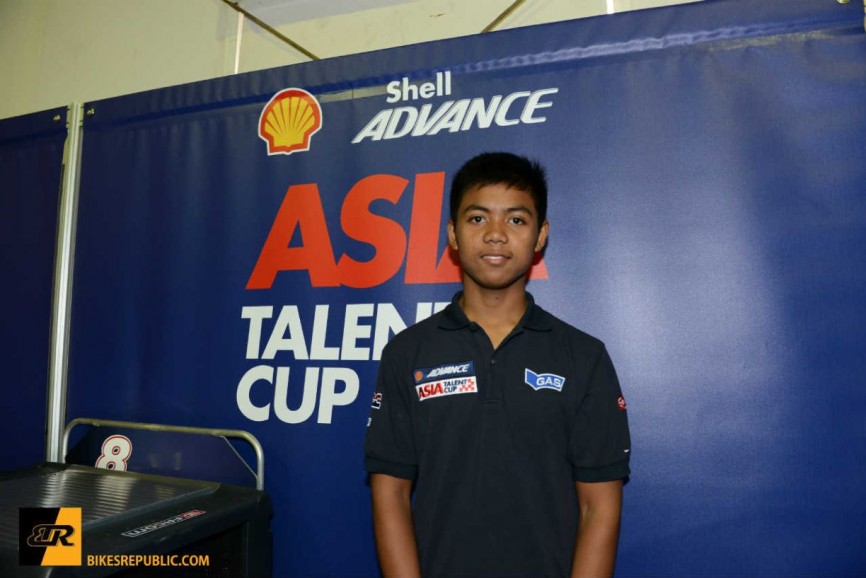 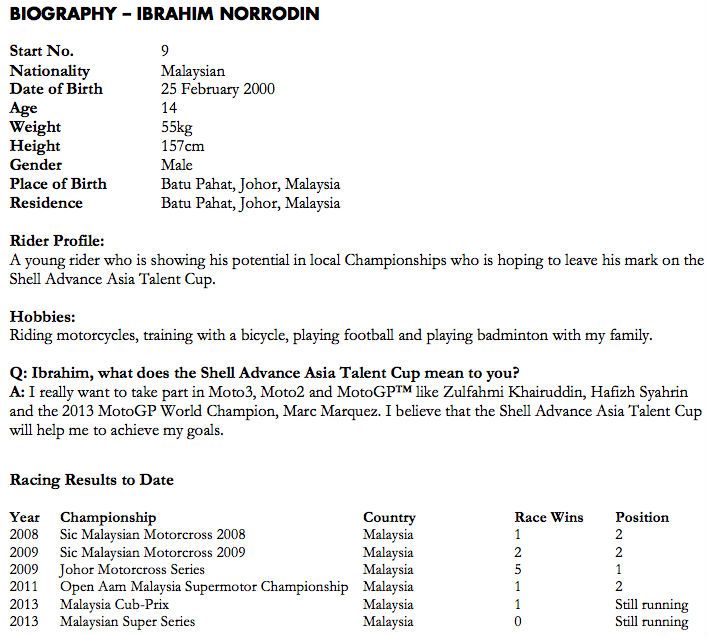 What’s your riding experience?
Not much, this is my first year racing. The rest have been training at Spain but this is my first experience here. So I am a bit nervous and a bit honoured because my timing is not that far off from the rest.

Have you crashed?
Nope, I have not crashed so I am a bit nervous. But I have crashed during Cub Prix before.

Who are your heroes?
Marc Marquez and Zulfahmi Khairuddin

Your goals?
I want to make it to Moto3 and lets see where we go from there.