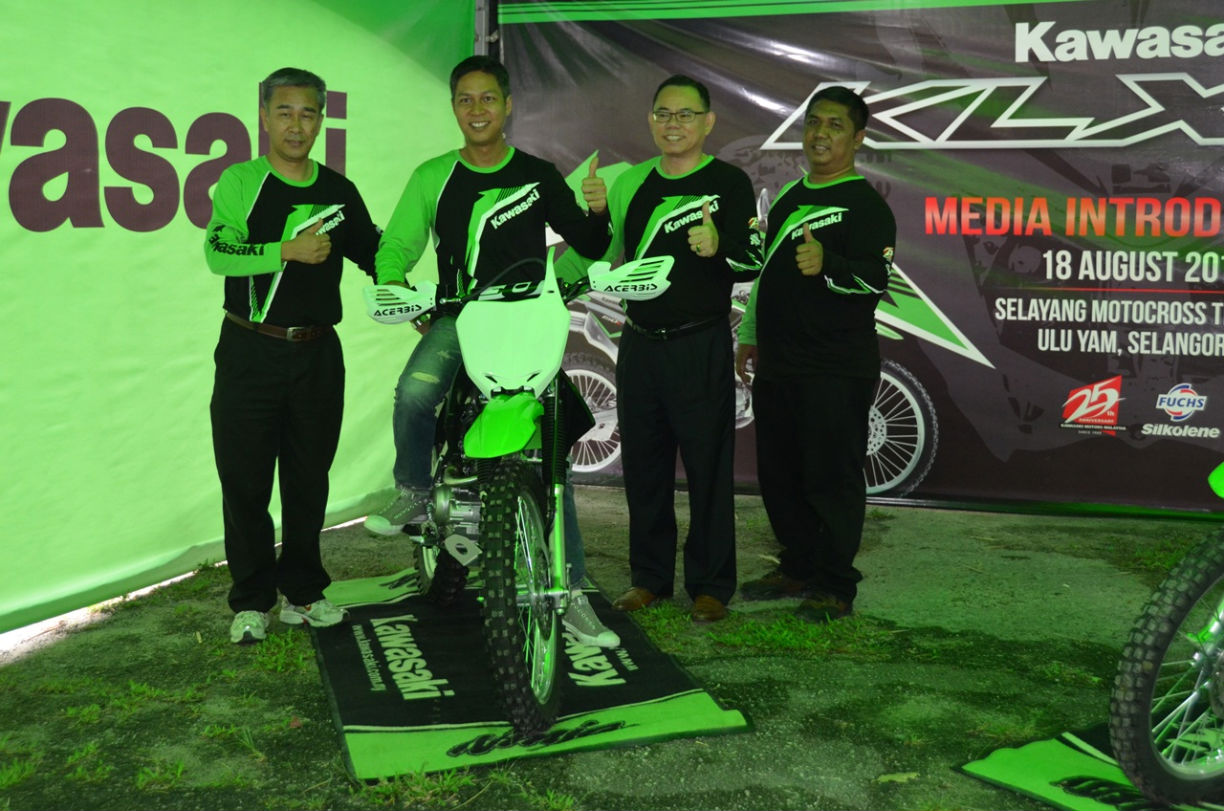 Kawasaki Motors Malaysia (KMM) had just launched the newly improved KLX150L. Taking feedbacks from customers, Kawasaki decided to updated the KLX150S that was launched to the Malaysian market back in 2009. 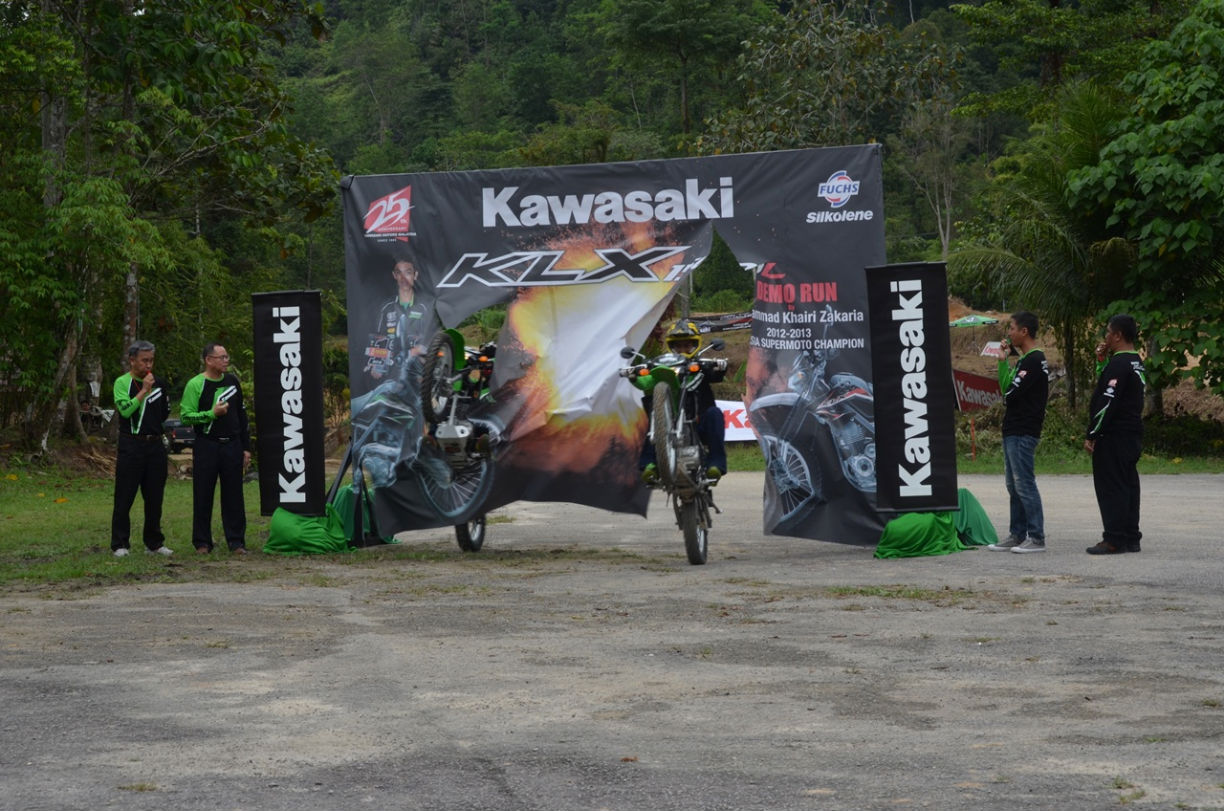 The strong points of the bike were kept with things like the slim and rigid perimeter frame along with the highly reliable engine.
The biggest change is the wheels, its bigger now with 21inch up front and 18inch on the rear, both are alloys to keep the weight down. Matched to the new wheels are uptrated forks and a longer swing arm. Also changed to match the new wheel size is the top gear drive on the 5-speed gearbox. 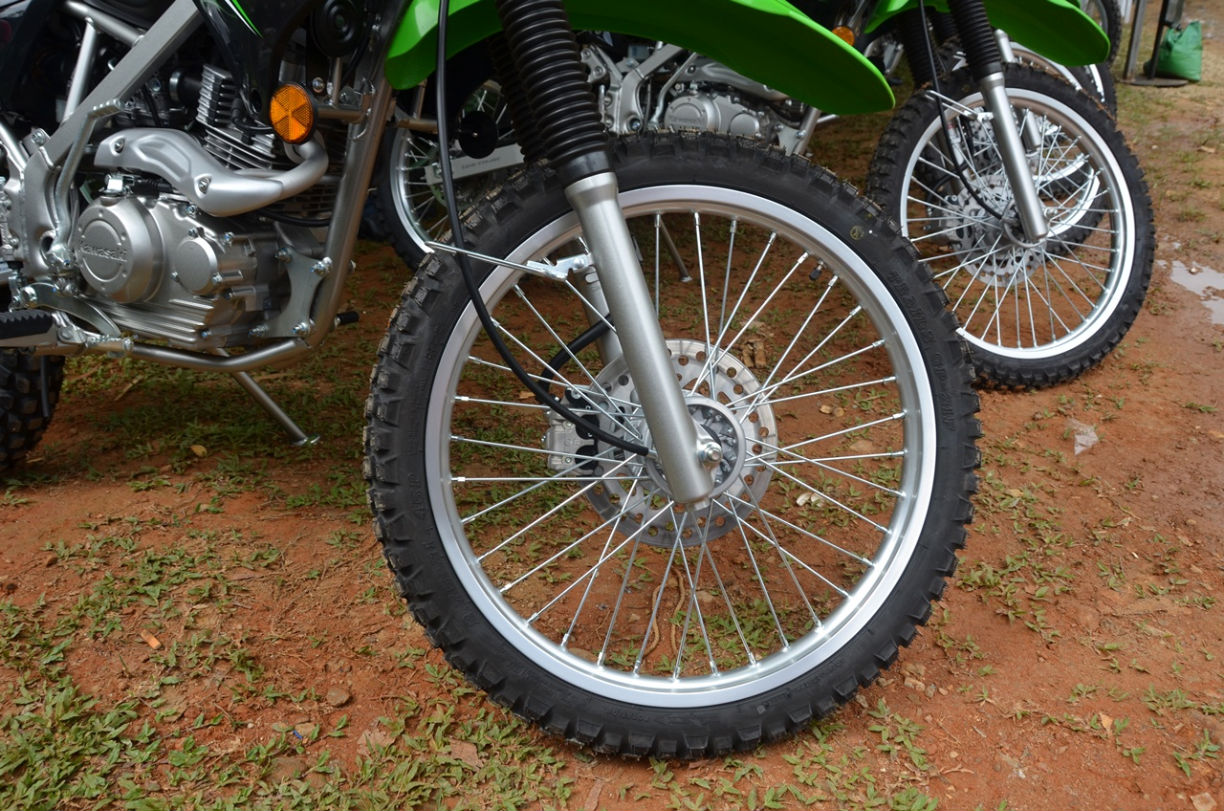 As mentioned the 144cm air-cooled four-stroke engine remains the same but this time it comes with both electric starter and kick starter just in case the battery fails after riding in rough conditions.

In conjunction with the launch, we were given a chance to try the KLX150L for a few laps on the Ulu Yam motorcross track. 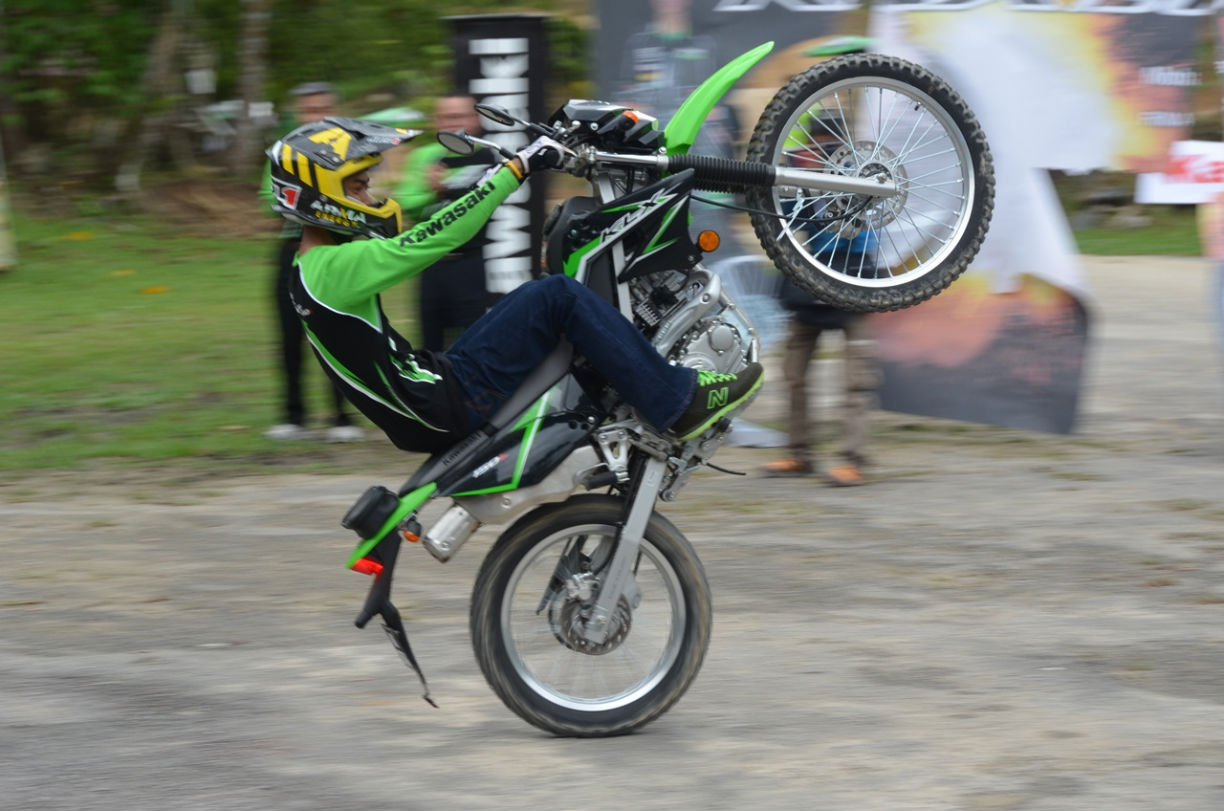 The track is 800 metre long with the usual jumps and tight turns typical of a motorcross track. Though only 12hp, the KLX150L was able to chug along with this heavy weight test rider on board. 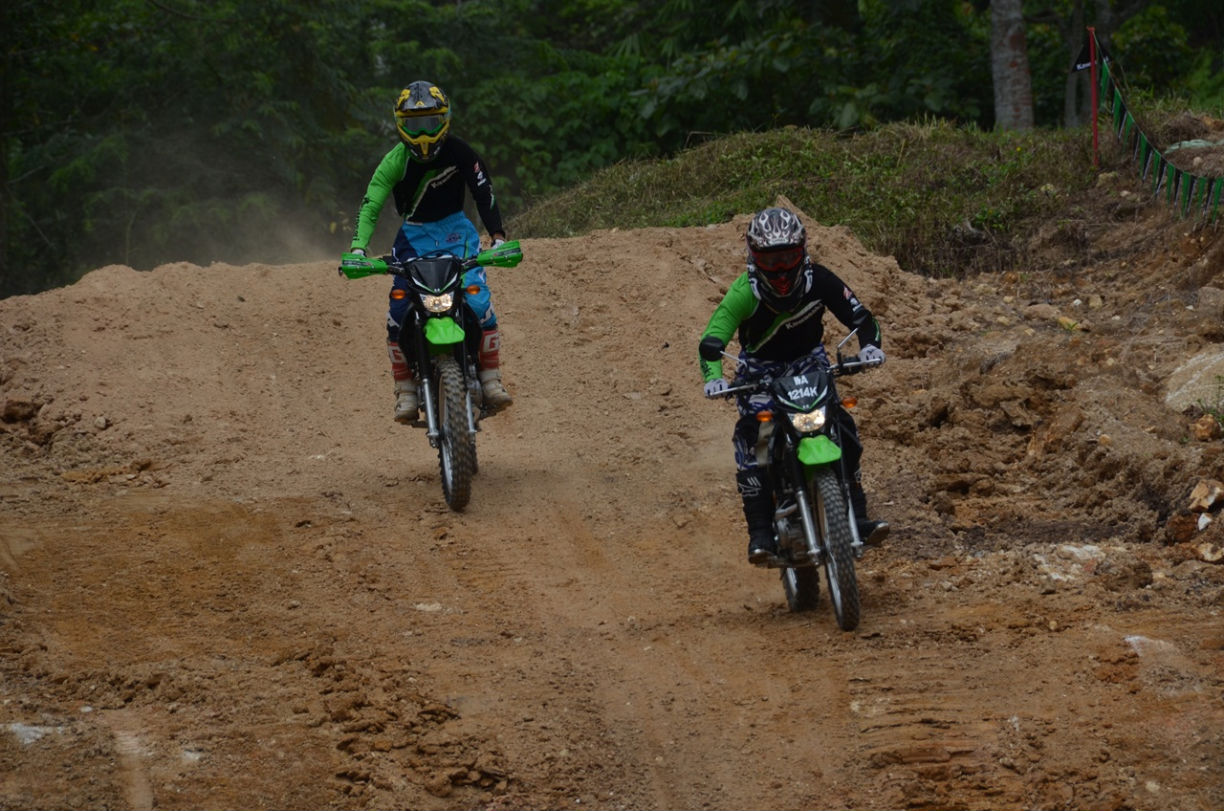 The steep ramps were easily conquered with either first or second gear and it didn’t bog down so much or get stuck as the big diameter wheels makes it easy to roll over soft sand.
Though said to gain about 50cm of ground clearance, the bike is still low enough for a five-and-a-half foot tall person to flat foot it.

But as good as we were rolling around on the track. Luckily, Kawasaki had brought along their expert rider, Mohammad Kairi Zakaria who is the 2012-2013 FIM Asia Supermoto champion for a proper demo. 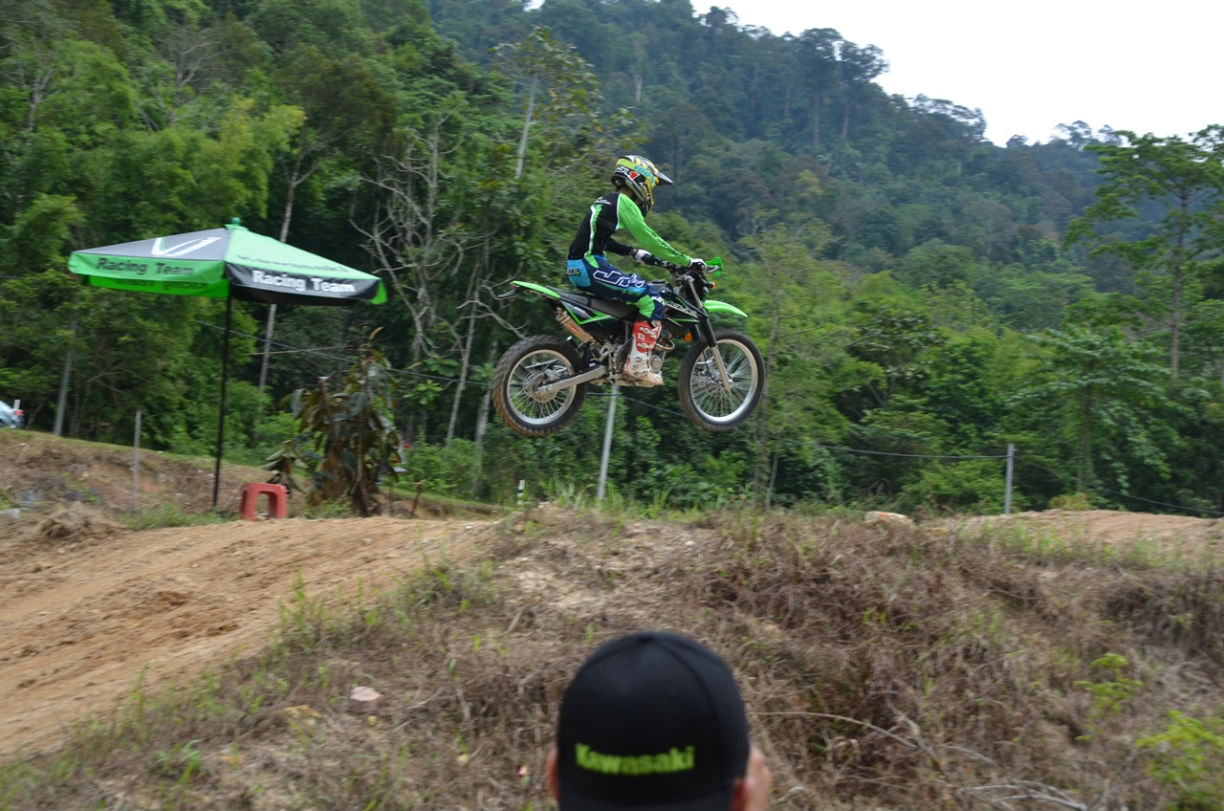 It was obvious that though the engine’s 12hp seem puny, but combined with a lightweight body, Kairi was able to catch some air with the KLX150L.

Apart from the track, we were also given the opportunity to try the KLX150L on a short 600metre trail. Though most of the parts were just rolling over ruts and roots, zigzagging between trees which showcases the KLX150L’s small and nimble size makes it ideal for tight trails. Some parts of the trail were a bit harder with deep mud crossing but it was no big deal for the bike.

Jeffrey Lim Chee Sing, GM of KMM is confident that the KLX150L will be more popular then the discontinued KLX150S and targets to be at 2500 units or 25percent of the small 150cc DP segment as compared to 900 units or 19percent on the previous model.

For now the KLX150L comes in two colours, Kawasaki green or black and priced at RM9389.00. A small increase over the previous model.