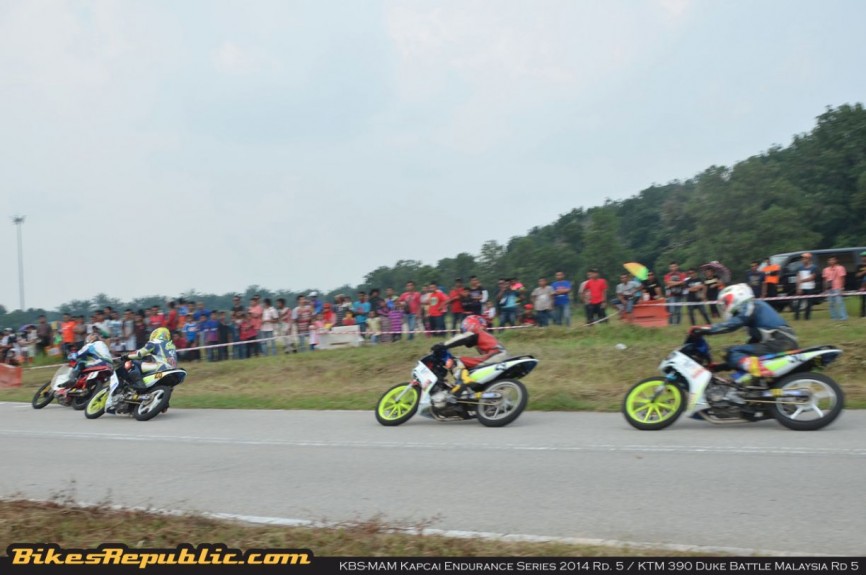 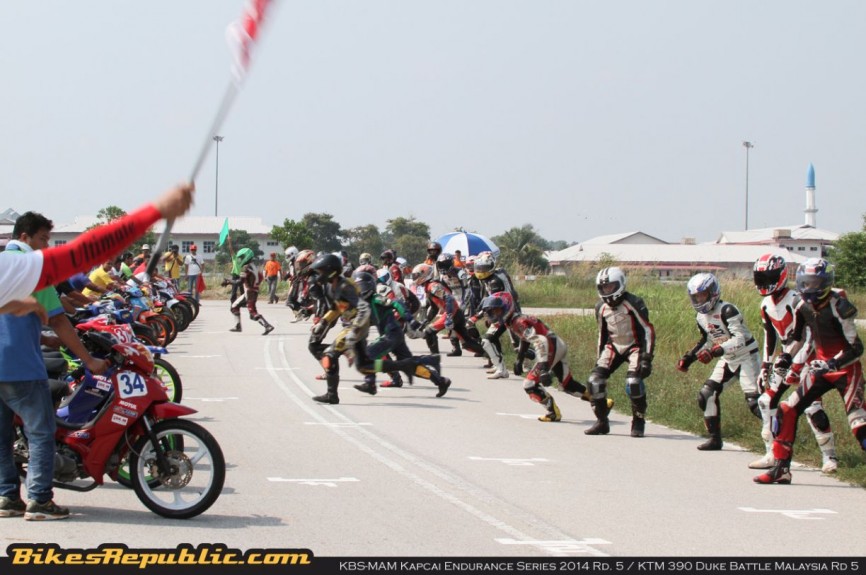 The KBS-MAM Kapcai Endurance Series held its fifth round last weekend in the bustling township of Muar, Johore. Unlike the series’ usual locales, whereby organisers use purpose-built or go-kart circuit, the fifth round was held in the Maktab Teknik PDRM Bakri. 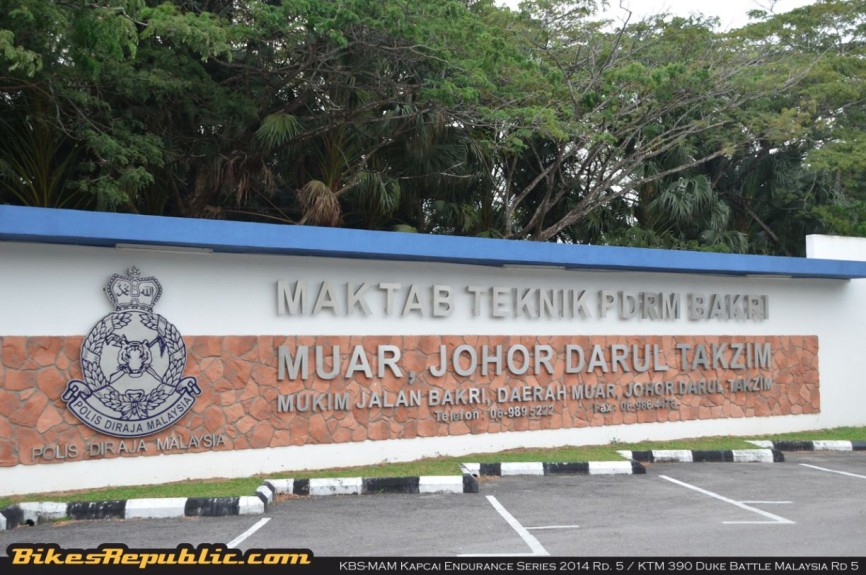 With the support of the Royal Malaysian Police (PDRM), the police academy’s training circuit, used for various vehicular training purposes, was converted into a makeshift racing circuit. The marks the series’ second appearance in the unique location. What was commendable was the higher than usual number of crowd in attendance to catch the kapcai and the supporting KTM 390 Duke Battle racing action on track. 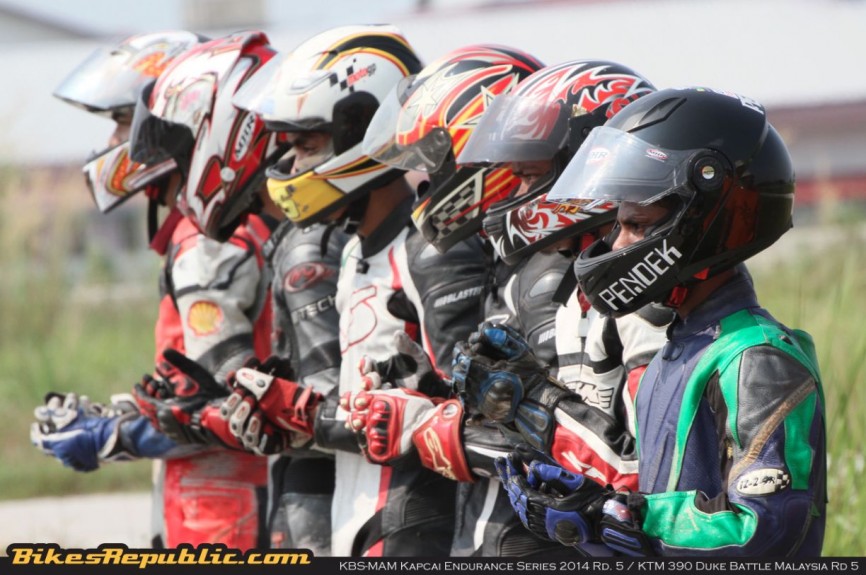 As per local Islamic customs, the weekend started with practice and qualifying on Friday instead of Saturday. With the entry list totalling at 118 riders, this is one of the series biggest round to date, two races were held on Sunday, each lasting two hours respectively. 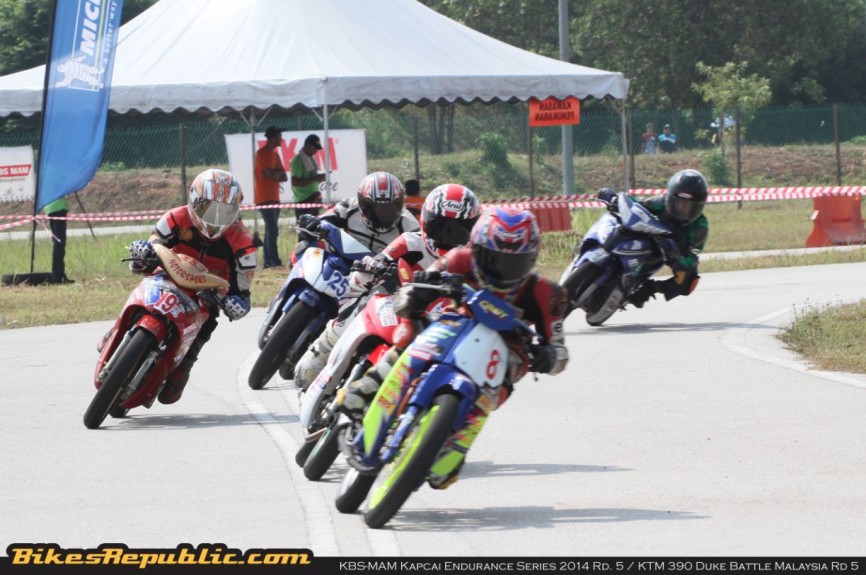 Overall victory in Race 1, where Class 1 and Class 2 were contested, was claimed by the Cenoni Racing Team. The Class 2 team and its riders Mohd Azrien Bin Osman and Muhd Azlan Shah set the pace throughout the race, completing 94 laps of the 1.3km-long PDRM Bakri circuit with their victory. 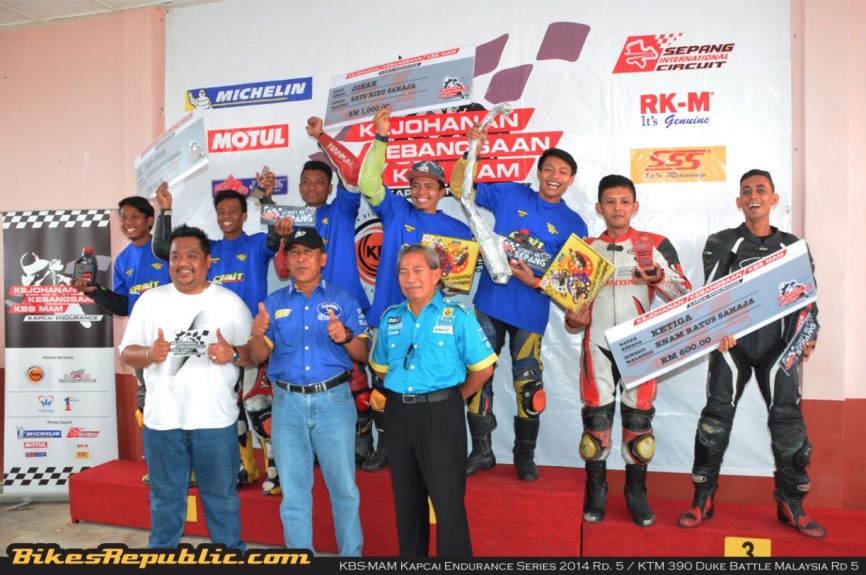 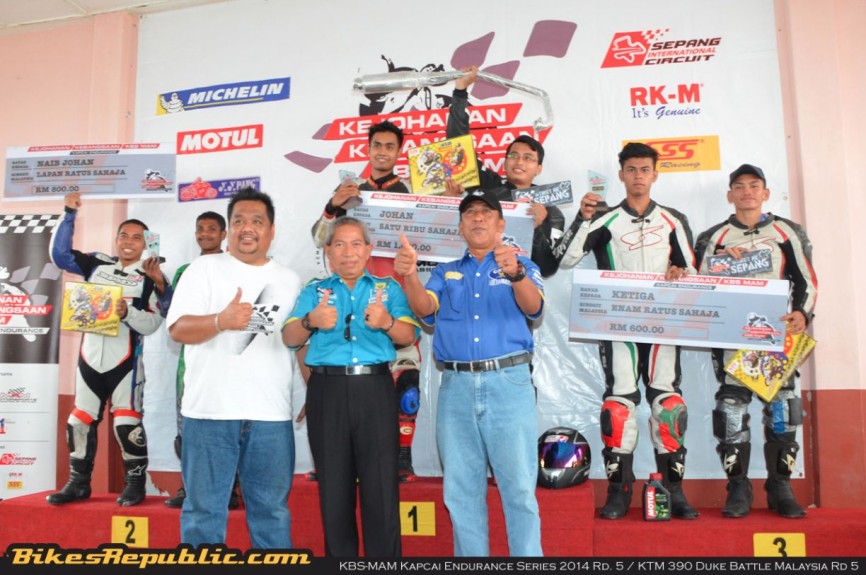 Finally, the class’ final podium spot was claimed by the GB4B (Pekan) POLISAS Racing Team and its riders Mohd Izzat Izzudin and Muhammad Nor Shahiran. 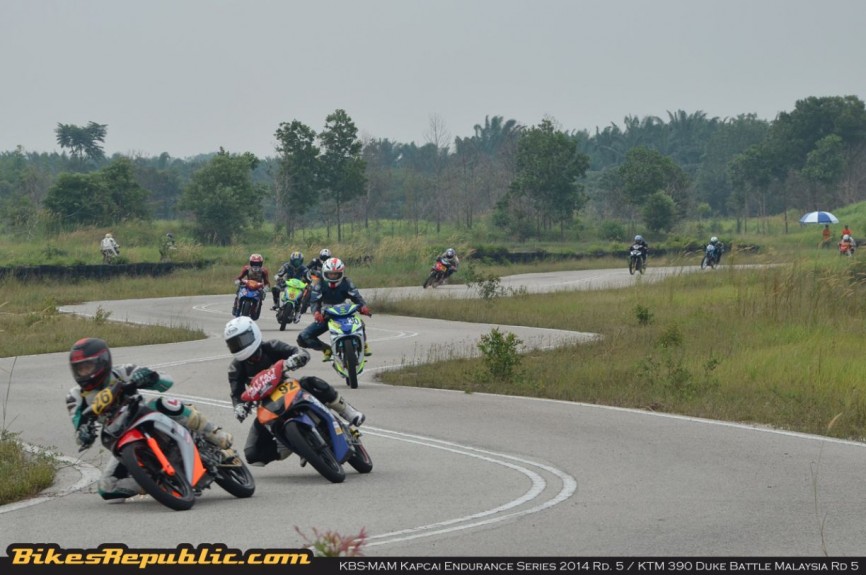 The action continued in Race 2 where the Class 3 and Open Class categories were being contested. Claiming overall race victory here were the Capit Racing Team. The team’s Class 3 outfit, comprised of riders Mohamad Khuzaini Bin Mahmood and Muhammad Shahnizam, completed the two-hour enduro with 95 laps. 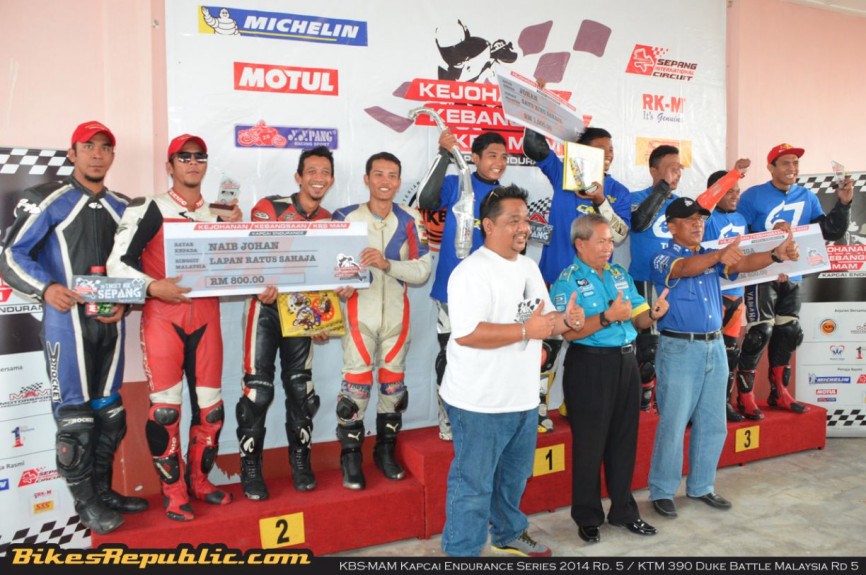 With their overall race win, the Capit Racing Team 3 were also classified as winners in Class 3. Earning the second podium spot in the class was the PMC Cheetah Power and its four-strong riders line up of Muhamed Khairul Izzad, Muhammad Ammar, Muhammad Khairil Hamizan, and  Mohd Hariss Fadhilah. 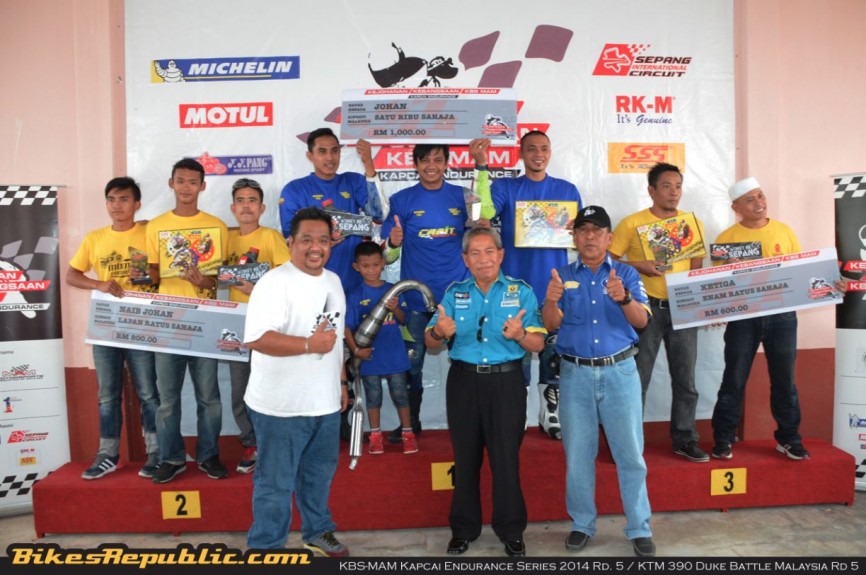 Last but not least, victory in the Open Class was claimed by another arm of the Capit Racing Team, this time with riding trio of Muhammad Razzi Hafizi, Safrizan Bin Buang, and Mohd Nazree. 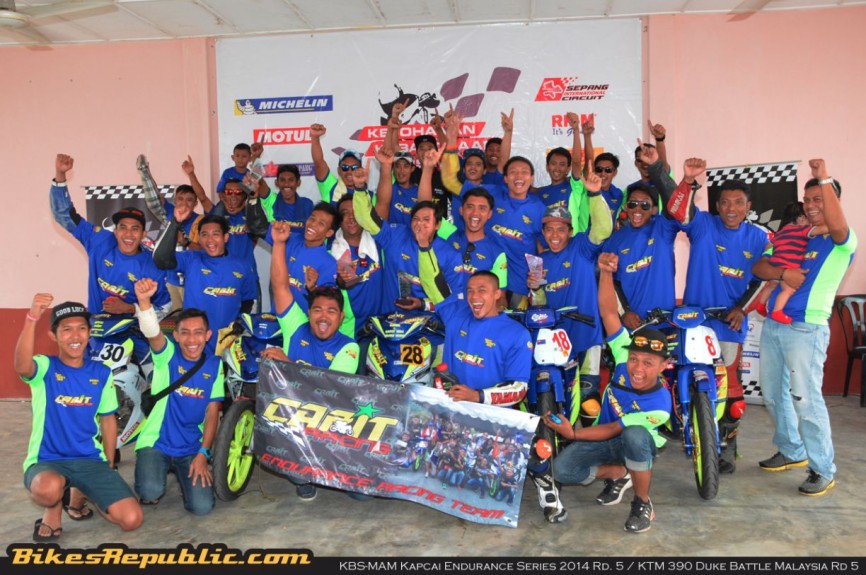 With multiple class victories and podiums hauled from the weekend, the biggest winners of this round undoubtedly were the local Johore-based Capit Racing Team. As you can see in the photo above snapped shortly after the podium ceremony, the team’s significantly large manpower proved to be a their winning asset for the weekend.

Next, the KBS-MAM Kapcai Endurance series will hold its sixth round in just a few weeks time in the township of Pekan, Pahang.

Don’t forget to check out our report of the supporting KTM 390 Duke Battle event as well. In the meantime, check out the extensive picture gallery below or visit the official BR Facebook page for more.