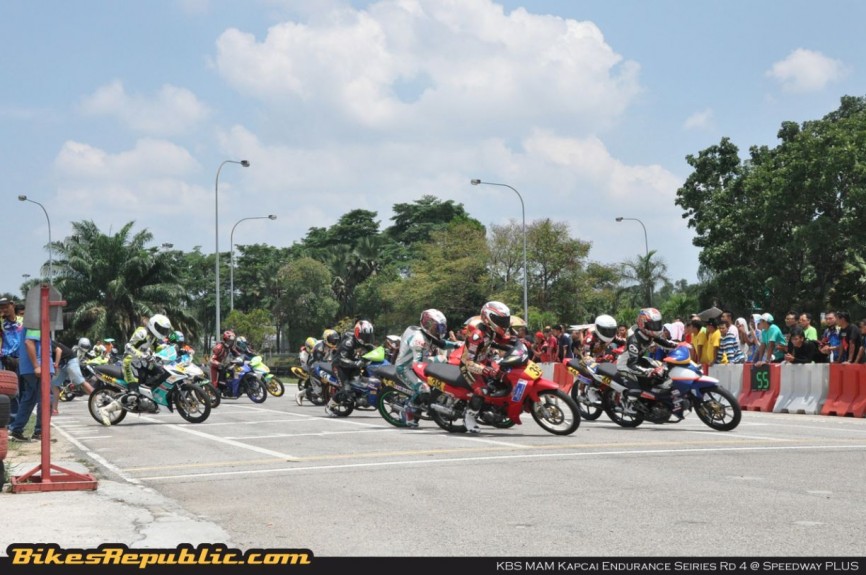 After a two-month Ramadhan and Aidil Fitri brake, the KBS MAM Kapcai Endurance series returned with a bang for its third round last weekend in the Speedway PLUS Circuit, Subang. 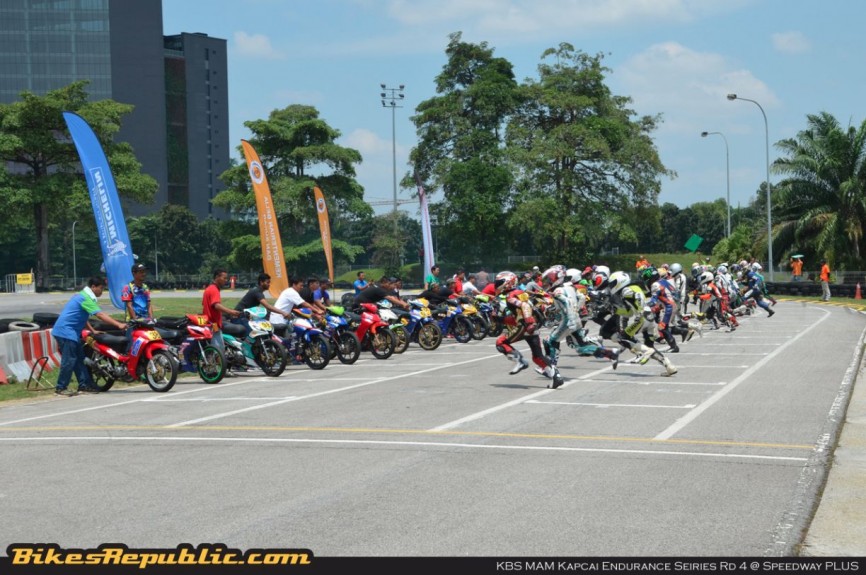 Despite the long break, it  did little to hamper the weekend’s high-level of energy, testosterone, and excitement. The Kapcai Endurance Series’ third round of the year was also supported with the third round of the inaugural KTM 390 Duke Battle Malaysia one-make series as its support event. (Read more about the ‘Orange Fever’ that made its own waves during the weekend) 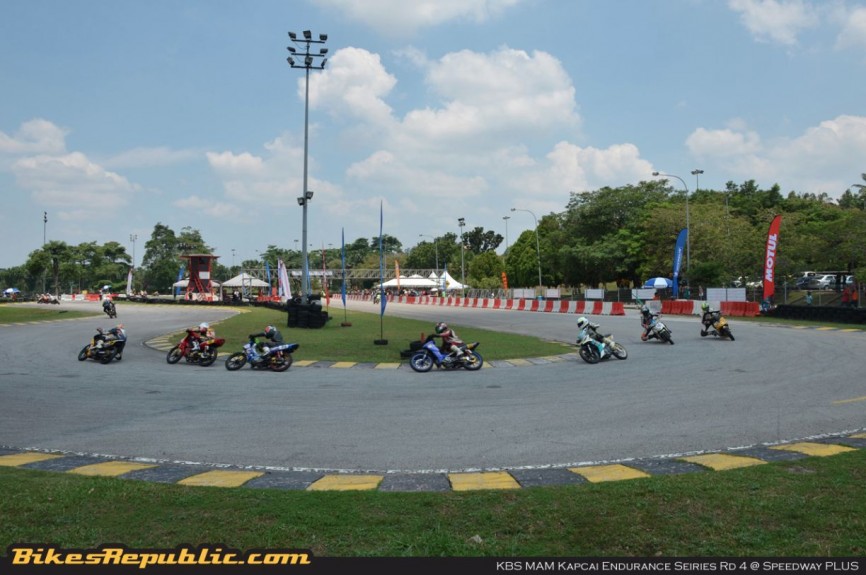 As always, the weekend began early on Saturday morning with registration and scrutineering, followed the practice and qualifying sessions that filled most of the day. Once again, youths from as young as 13 years old coming from all over the nation donned their gears to conquer the 1km-long circuit situated in Subang. While several sizable dark clouds did threaten to unleash itself, all sessions on both Saturday and Sunday remained dry fortunately, giving participants ideal conditions to pit their skills amongst each other in the four categories competed. 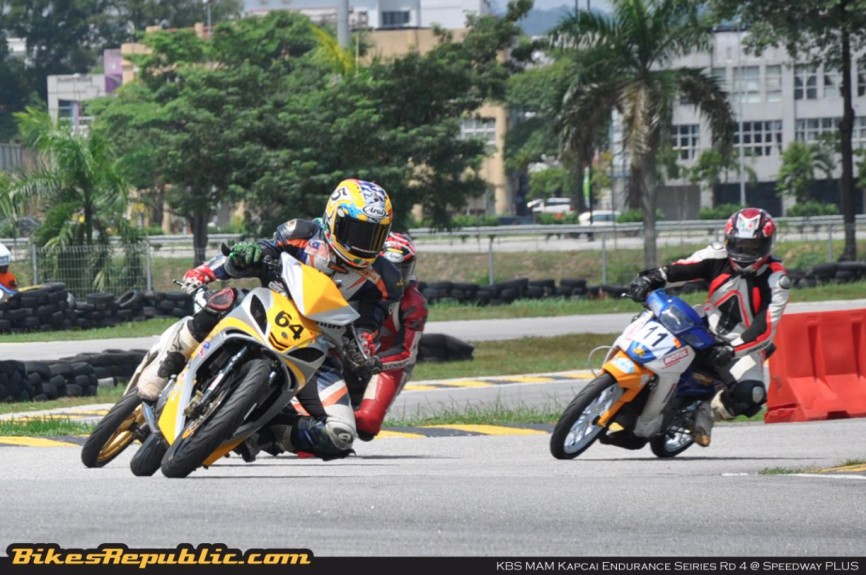 But like any race weekend, it all concludes late on Sunday afternoon where three teams from each category rightfully earn their spots on the podium, as well as their entry into the series’ finals scheduled for later this year. Besides their trophies, top three teams and riders also end the weekend with sizable prize money rewards, plus accessories and gifts from sponsors such as exhaust pipes and motor oil. 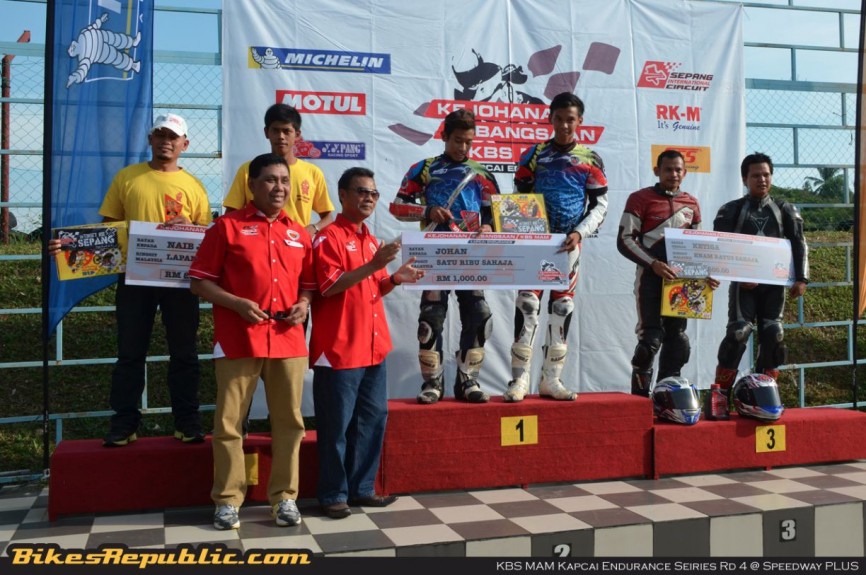 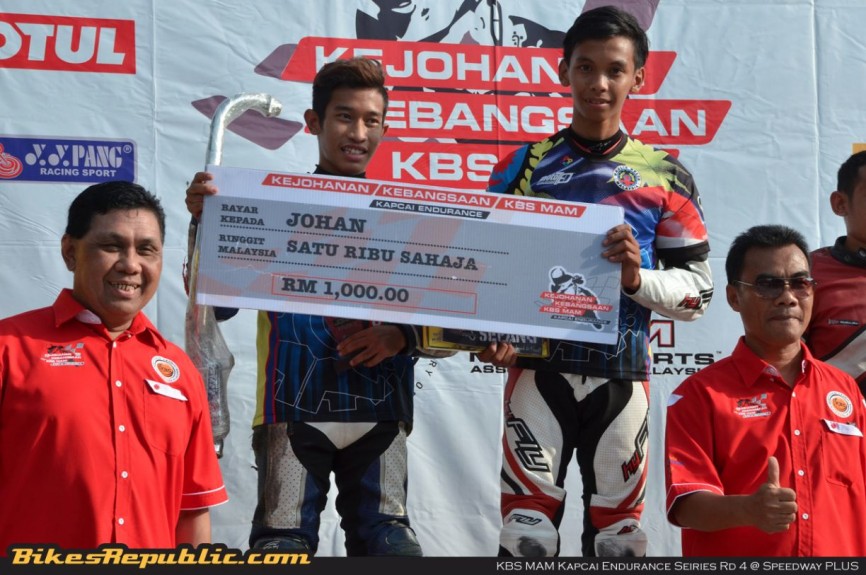 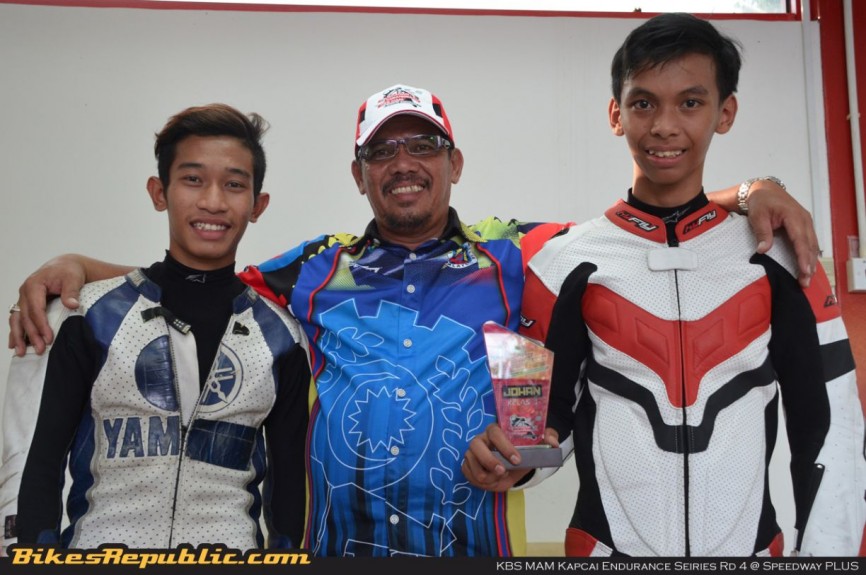 Friends for just about a year, 17-year-old Farriz and 15-year-old Effendy showed good chemistry at conquering the weekend in their category – a remarkable feat given that this is their first year actively competing in the series. “I feel very happy and excited to have won this weekend with my teammate (Effendy), and we are looking forward to the finals later this year,” said Farriz when we spoke to him shortly after the podium ceremony. 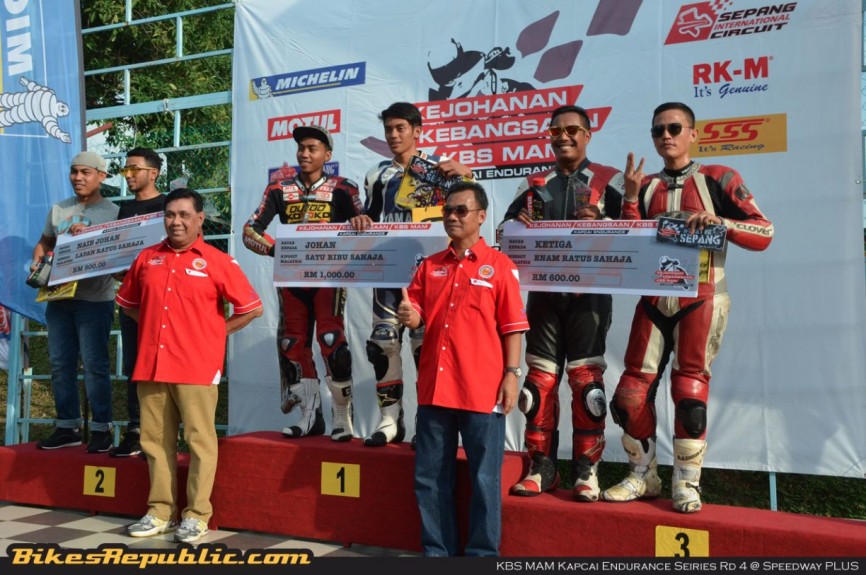 Moving on into the Open Class, top honours was claimed by team Sham Amat Yam Motor and its riders Mohamad Azhar Bin Abdul Jalil and Shafiq Rasol after successfully completing 95 laps in the two-hour stint. 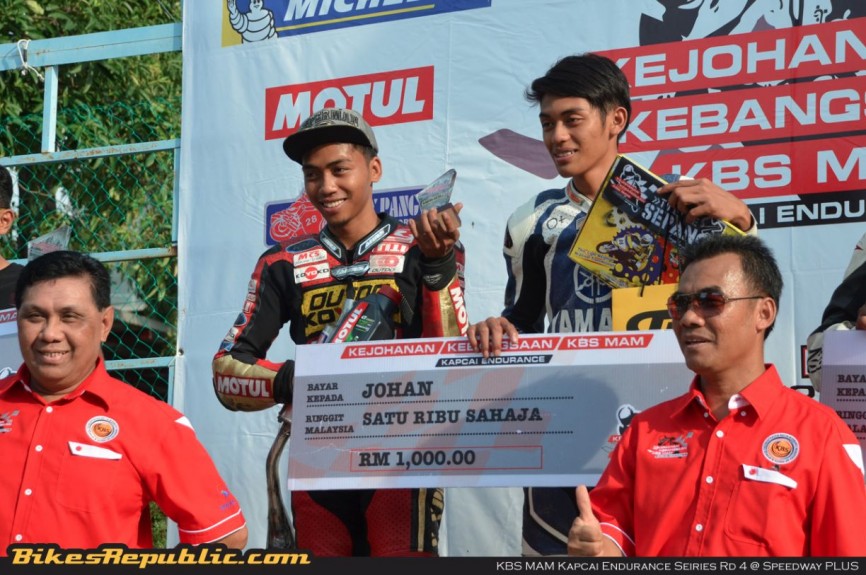 No stranger to the local racing scene, Shell Cup rider Shafiq Rasol was definitely at the top of his game. We caught up with the soft-spoken 18-year-old Malacca native and got some of his thoughts about his weekend. “This is my second KBS MAM race this year, and I am extremely happy to win this weekend. In my last entry earlier this year, I had to retire after the bike I was racing suffered mechanical issues while I was leading. This victory is special for me,” said Shafiq, who entered the weekend with an older and much more experience teammate Azhar. Shafiq also shared that the KBS MAM acted a good training ground when not astride the Shell Cup’s Honda NSF250R machine. 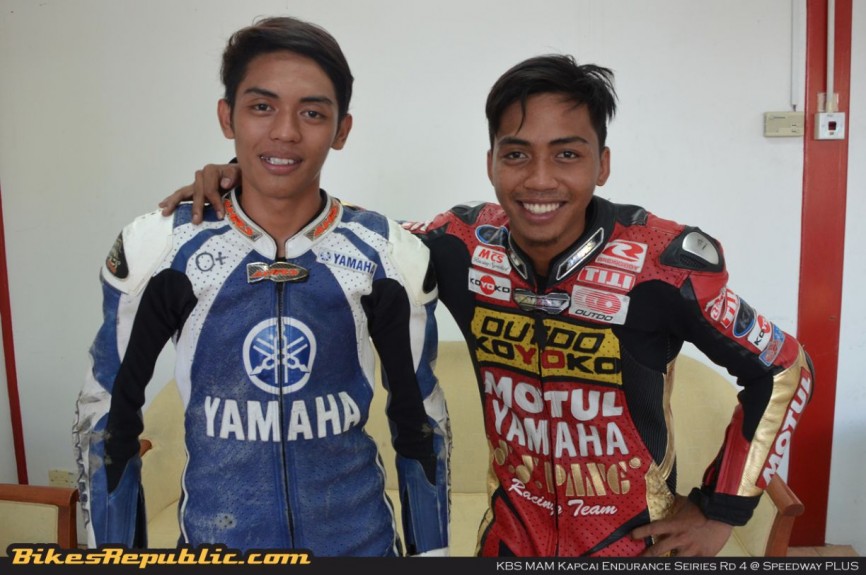 “To be honest, I felt very honoured to have a Shafiq as my teammate this weekend. We learned and taught each other a lot throughout the weekend, and our top step result could not be a better reward,” said Azhar, who currently races in Cub Prix as well. Azhar and Shafiq will ride again in the finals later this year, with aims of clinching another victory as well. 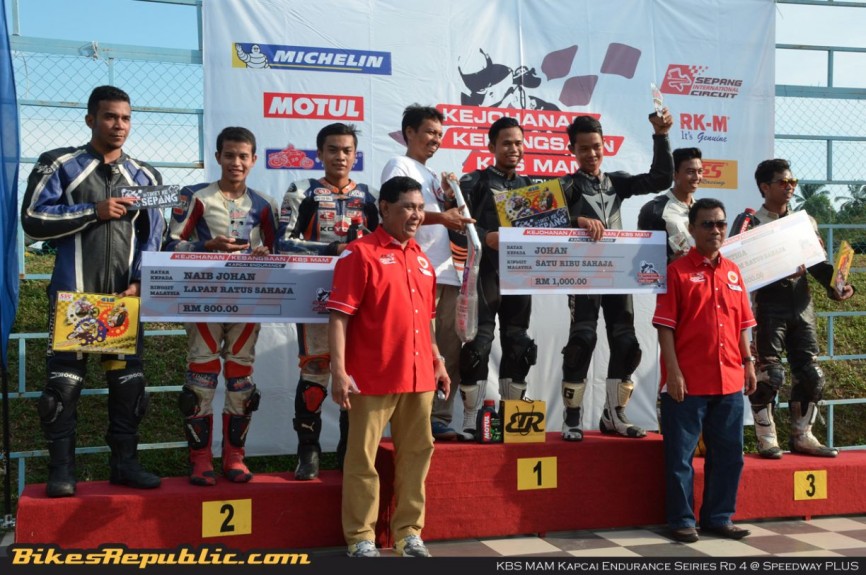 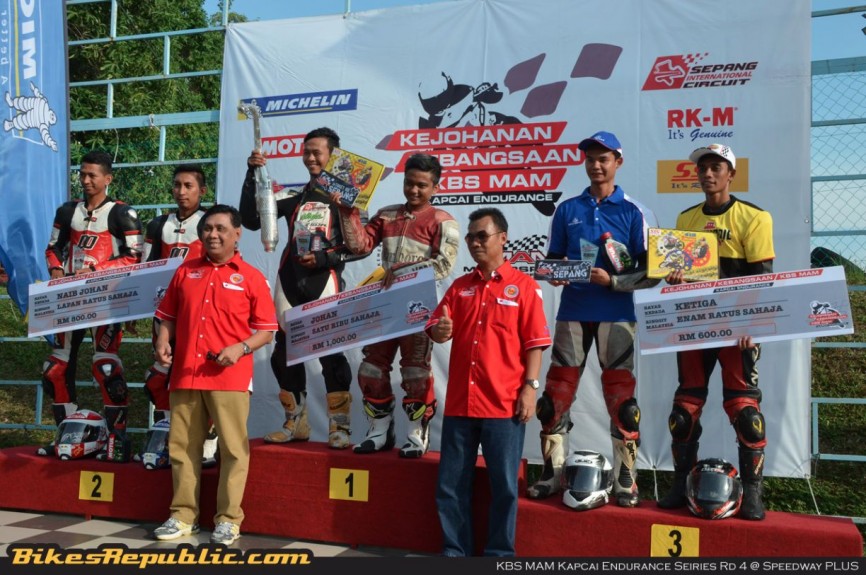 The KBS MAM Kapcai Endurance series will gear up once again next month for its fifth and sixth rounds. Round 5 is scheduled to take place in the Dato’ Sagor Circuit, Perak on September 6 and 7 whilst Round 6 will be held towards the end of September in Pekan, Pahang on September 27 and 28.

Check out the thrills, spills, and close racing action from the weekend in the gallery below.