She’s blonde, pretty and loves all things custom and retro. Get to know Miazil Jores in this edition of our Most Interesting Biker segment. 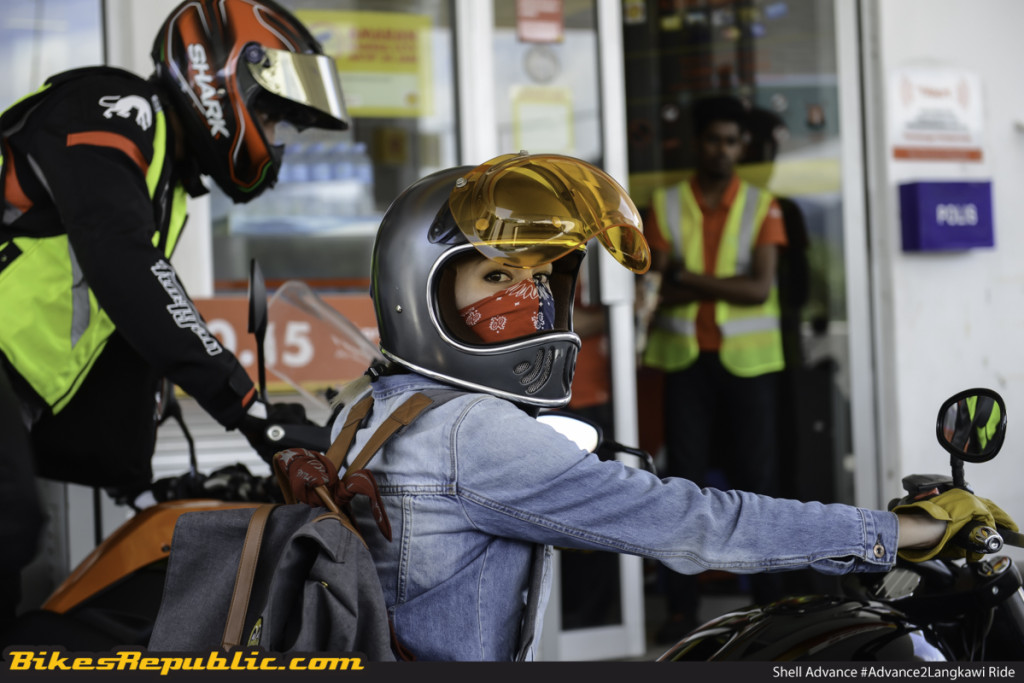 Ladies who ride custom and retro bikes whilst passionately indulging in the genre’s culture and lifestyle are rare. But that’s exactly what our friend and fellow biker Miazil Jores is.

You may remember this French blonde bombshell as one of the winners of the recent Shell Advance #Advance2Langkawi roadtrip that we organised not too long ago.

We recently took the time for a chat with Mia to find how she came to call Malaysia – or more specifically Johor Bahru – her home, and to find out how her love for custom bikes came about.

About Mia
Based out in the peninsula’s southern gateway city of Johor Bahru, Mia currently works as a freelance graphic designer and independent trader of sorts. She’s even dabbled as a model and commercial actress for a bit too.

When she’s not working, Mia is more often seen riding out astride her beloved custom 1998 Harley-Davidson Sportster Rigid – the carburetted version.

With nearly 25,000 followers on her Instagram page alone, it is no surprise to see Mia as one of the local custom bikes scene’s most prolific figures and influencers.

Keep scrolling to know more on how Mia got into biking, and to know more about what makes this riding bombshell tick.

Tell us about how you found your ‘home’ here in Malaysia.
It all began when my family first moved to Singapore when I was 9 years old. From there, we moved to Malaysia, and Taiwan as well for a few of years. I later returned alone to Singapore to complete my university studies, but I found myself back in Malaysia soon after. It is the place I felt more at home and my folks have moved to other countries since.

How did the motorcycling bug bite you?
I found my love for bikes through my godfather who took me for a ride around the neighbourhood on his motocrosss bike when I was about 7 years old. I grew up wanting to ride a KTM! Since then, I’ve always wanted to be that girl with her own ride!

My mom was too worried about me being on a motocross bike at first, but I soon settled for a Yamaha scooter when I was 17 while we were living in Taiwan for a year. With the scooter, I rode from home to school daily and on the weekends through the Taiwanese mountains. It was here that I tasted the road, and there was no turning back from there – the ‘damage’ was done!

What got you into the custom and retro bikes scene?
I’ve always been an artistic person myself, so when it comes to motorcycles, I naturally leaned into custom bikes. My riding passion deepened while was in the process of building my machine. I have so much admiration for all the talent, skills and art put into customising and building motorcycles.

Each motorcycle is a work of art, so much knowledge goes into building parts, putting together a bike and making each and every machine unique. It’s a work of art in its own, and represents the vision of one or more people: the owner, the builder or both.

If you think about all the parts needed to build a bike, you can imagine how much talent can be put together in the realisation of one bike: metalwork, leatherwork, body paint and embellishment made by pinstripe artists or hand lettering artists, wood makers, metal engraving, welders, machinists and not forgetting the mechanic that works on more often than not old engines. Think of a bike as a blank canvas, all you really need is the bare minimum and build around the motor.

Riding such a bike, which is the laborious fruit from so much talent then becomes an honour. It’s also an expression of individuality. But I will also add that it is an addiction, as you are never truly done customising your motorcycles!

How would you describe your style?
It would be so hard to put me in one box! I’m a flexible rider and adapt depending on situation, mood, and the bike I am riding. I ride daily, so which makes my bike my main form of transportation. Its also a great way to wake myself up in the mornings and to de-stress in the evenings. I tend to “blow steam” a lot on the highways where I often go full throttle, racing my own shadow.

But on weekends I love to travel the old roads and through ‘kampungs’. You could say that I’m much more of a relaxed cruiser rider. I often prefer travelling through these roads, and I have a passion for discovery. I love to get lost and imagine myself on a great adventure. I don’t mind going off road either so as long as the bike I’m riding can handle it.

What was the most memorable riding experience you’ve had recently?
I was riding off road in the mountains of Bandung in Indonesia just last month with the guys from Unionwell, Riders and Rules and Picker Store. It was such a beautiful sight, the kind that make you feel miserable for not having a GoPro to capture the views and trails!

The best part was that I rode with 15 other bikers who ride bikes of all kinds ranging from motocross to custom scramblers, as well as vintage motorcycles plus a classic Harley-Davidson rigid. Despite the differences, we all managed to ride together and share this beautiful experience and had so much fun doing so.

What’s on your motorcycling bucket list and how much of it have you completed?
I have accomplished much more than I could dream of as a person who works practically every day. I’ve been lucky to find time or get sponsored to ride. I’ve travelled both solo and with friends to so many places in Malaysia and I am currently enjoying exploring my home state of Johor in greater depth.

I’d love to go on a long riding trip across Indonesia. The scenery is breathtaking, not to mention the huge classic and custom bikes scene there that makes it even more interesting to ride from one end to the other. I’d also like to meet all these amazing talents, collectors and passionate enthusiasts.

Also, I’ve never been to Kelantan, and somehow that bothers me a lot! I did plan a One Malaysia solo trip using old roads starting from the West coast coming down by East coast. I had to cancel this because of work, but that’s definitely one of my pending trips. I just wish to keep being on the road exploring until the day my son can ride with me. I guess I don’t have huge fancy dreams when it comes to riding. And owning a few custom and classic bikes of every kind, about 20, that’s not too much to ask for right?

Is there something you’d like to say to all your fans and followers?
Yes! For those who wish to ride, don’t choose your bike based on the type your friends are riding. For those already riding, just know that it’s ok to ride with your friends who ride totally different bikes as you do. I don’t see mixed groups often enough.

I too, have my own group of friends who ride similar rigid bikes, but I often ride with other bikes. I’ve ridden my chopper with caferacers, vespas, superbikes, Japanese bikes and more. The most important thing is that the people you ride with enjoy the same things in riding as you do, the same roads as you do, the same scenery, the same mindset. And more often than not, they’ll make you ride much more enjoyable.

So ride with everyone regardless of the make of their bikes, and support those in the scene based on their talents and not on their taste of bikes. Embrace the difference because at the end of the day, we all share the same passion for motorcycles, in our own way.

You can follow Mia on Instagram (@miazil) to see more of her exploits in the local custom and retro bikes scene.