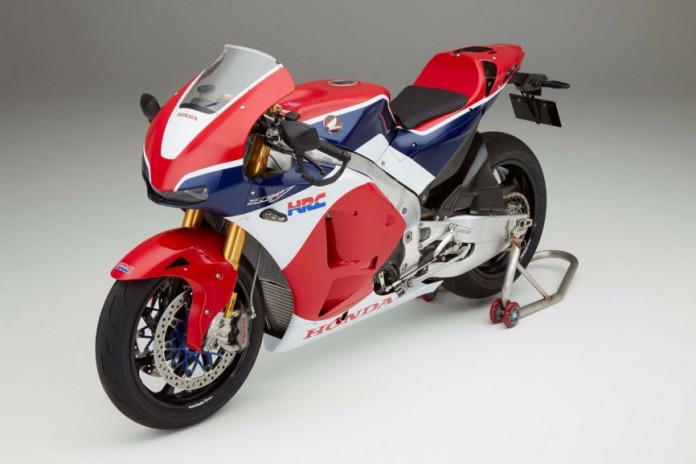 It has been a long time coming, but the mighty red-wing H-brand has finally unwrapped its new street-legal hyperbike. And, at first glance, the new Honda RC213V appears to have all the right attributes of a proper hyperbike indeed.

As previously reported, Honda has made its road-going MotoGP bike available in two forms starting with a ‘basic’ RC213V-S, followed by a more powerful RC213V-S fitted with an optional ‘sport kit’ meant for track use only. Each unit will be built exclusively in Honda’s Kumamoto factory with a reported production pace of one motorcycle per day. Though unconfirmed, we reckon production may be limited between 200 to 300 units only with first deliveries slated towards the end of this year.

Two colour choices will be offered, one being the ‘tricolor’ scheme seen in the featured images, whilst the other being finished in plain carbon fibre, with both scheme available with carbon fibre fairings as well. Unlike the race bike it is based upon, the road-going RC213V-S has been changed slightly to make it more street-friendly. Amongst these changes include the adoption of coil spring valves instead of pneumatic ones seen in the race bike, followed by the adoption of different gearbox, tires, and brakes, plus a recalibrated maximum steering angle.

Some items from the race bike are retained though. These include the slipper clutch, the swingarm, the 17-inch Marchesini magnesium wheels, the pressurised Öhlins forks, adjustable footrests and foot controls, and the bulk of the Brembo-supplied braking hardware with steel discs instead of carbon. Also unchanged is the fuel tank’s position being hidden behind the carbon fibre bodywork underneath the rider’s seat.

The RC213V-S’ electronics will offer a total of five riding modes, which is then matched with a ‘sophisticated’ traction control system. Other notable race-derived features primed in the RC213V-S include engine braking control, a quick-shifter, and an inertial measurement unit (IMU).

All in all, Honda claims that the RC213V-S tips the scale at 170kg dry, with the optional ‘sport kit’ reducing that further to 165kg. All that mass is propelled by the RC213V-S’ race-derived 999cc DOHC 90° V4 heart primed with Honda’s signature PGM-FI electronic fuel injection system, plus titanium connection rods and sand-cast aluminium crankcase.

Unfortunately, the mill’s output is regulated depending on which market it enters. For example, American buyers will have to make do with just 101hp and peak torque of 89.4Nm – both generated at 8,000rpm. In other markets that allows, the RC213V-S will offer its full potential of 156.8hp developed at 11,000rpm and peak torque of 102Nm generated at 10,500rpm.

The optional ‘sports kit’, on the other hand, offers greater power of course. Honda claims that the kit will allow the mill to develop ‘over’ 212hp at its limit of 13,000rpm, and ‘over’ 118Nm of peak torque developed at 10,500rpm. Unfortunately, Honda will reportedly not offer this option for American buyers, whilst buyers in countries where it will be offered will have to likely deal with a voided warranty.

Presently, Honda is offering the RC213V-S to buyers in its domestic Japanese home market, followed by America, Europe, and Australia. Interested buyers will need to first register their intent via a special site, www.rc213v-s.com. Honda states that customers outside these regions will be issued a special set of instructions sometime next month instead.