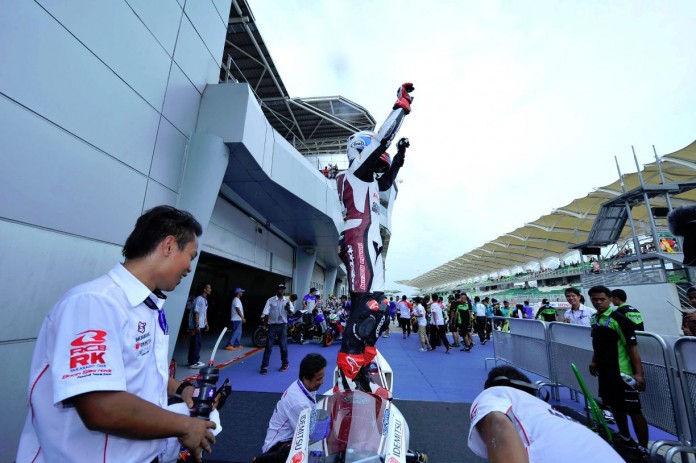 Musashi Boon Siew Honda could not have asked for a better start to their 2015 campaign as riders, Yuki Takahashi and Zamri Baba each secured a victory in the gruelling SuperSports 600cc class in the opening leg of the FIM Asia Road Racing Championship at Sepang on Sunday.

Yuki lived up to his name as a former Moto2 rider as he cruised to victory in Race 1 with minimum resistance from the field, completing the 25-lap race in 27’31.626s followed by Zamri in second place with 27’33.199s and Ratthapong Wilairot (AP Honda Racing Thailand) third, 27’43.481s. 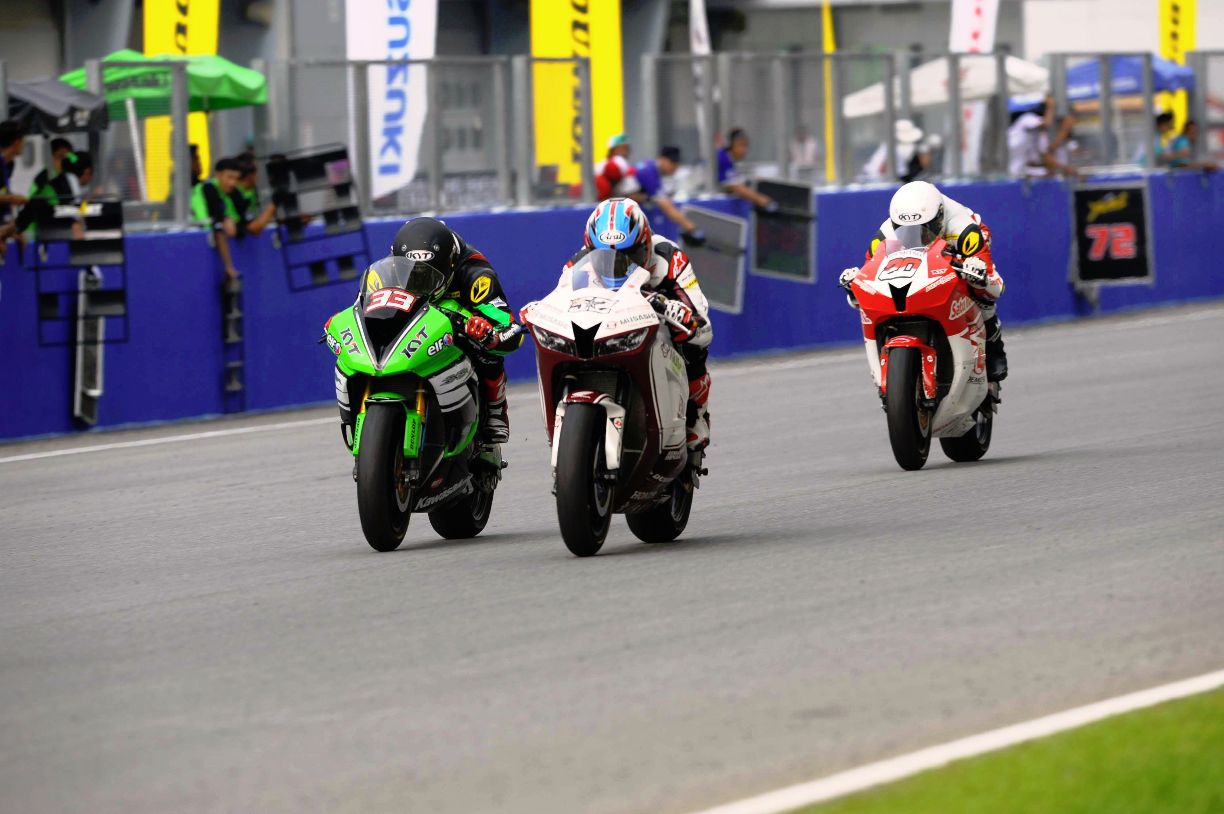 Zamri went on to win a dramatic Race 2 that saw countless overtaking and daredevil maneuvers from start to beginning, crossing the finish line first in 27’53.707s, 0.774 seconds ahead of Yudhistira (Manual Tech KYT Kawasaki).

Dimas Ekky (Astra Honda Motor Racing) who initially finished third was demoted to fourth after Race Direction found him guilty of overtaking during a yellow chequered flag. Following that decision, Tomoyoshi Koyama (NTS TPro Yuzy Honda) was moved up to third with 27’54.790s.

“I feel proud winning one of the two races here today at my home track and in front of my family, friends and supporters,” said Zamri. 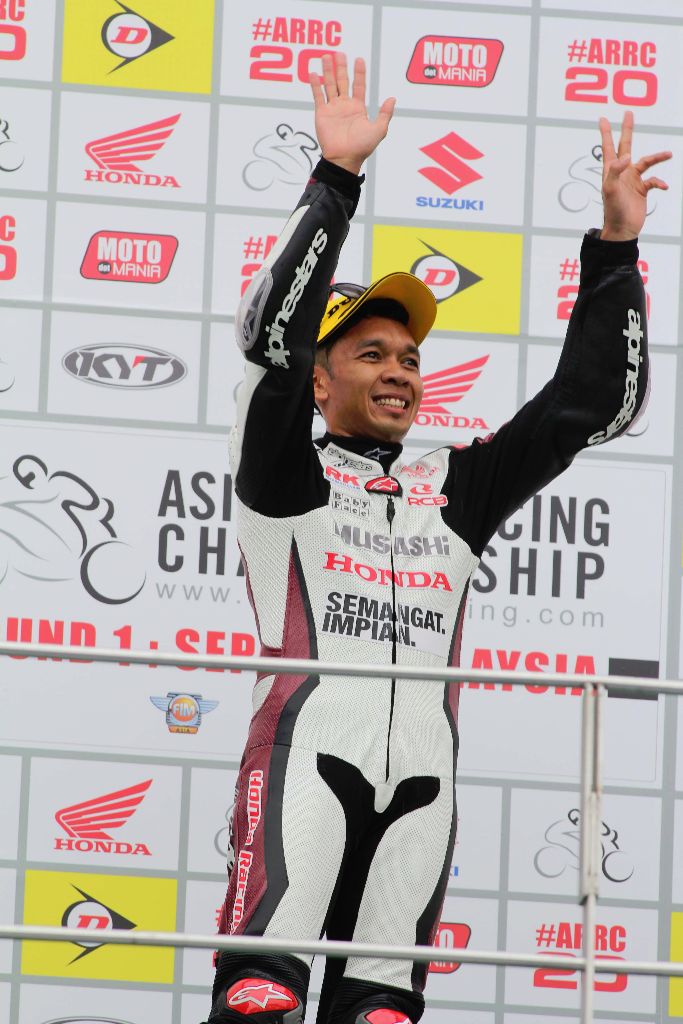 “I knew it was not going to be easy to repeat last year’s double win but at least I managed to finish both races on the podium. In fact, I believe this year’s competition is a lot more harder than the previous seasons,” he added.

Reflecting back on his outing during both races today, Zamri added, “Race 1 did not go too well. I missed a gear at the start and for the rest of the race I was playing catch up with Yuki who had a menacing consistency.” 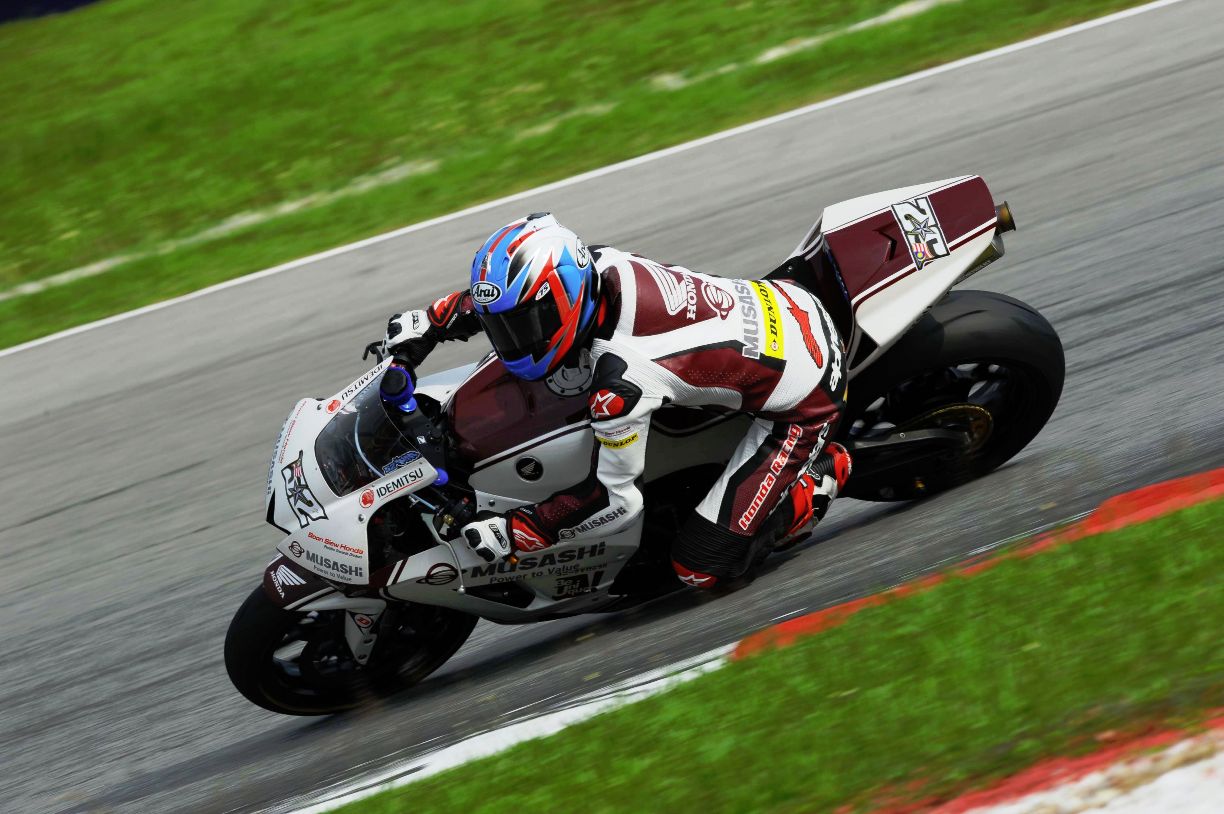 “Things were better in Race 2, I enjoyed a smooth start when the lights went out and was able to steal the holeshot immediately. But I did not expect to be fighting throughout with Yudhistira throughout the race. We swapped the lead several times until it started raining at several turns. I did not want to take any unnecessary risks and slowed down my pace and this was when the rest of the field caught up. But once the track dried up I started pushing and managed to pull a slight gap from my rivals. I am very happy with this win and I would like to say thank you to the team and our sponsors for supporting us.” 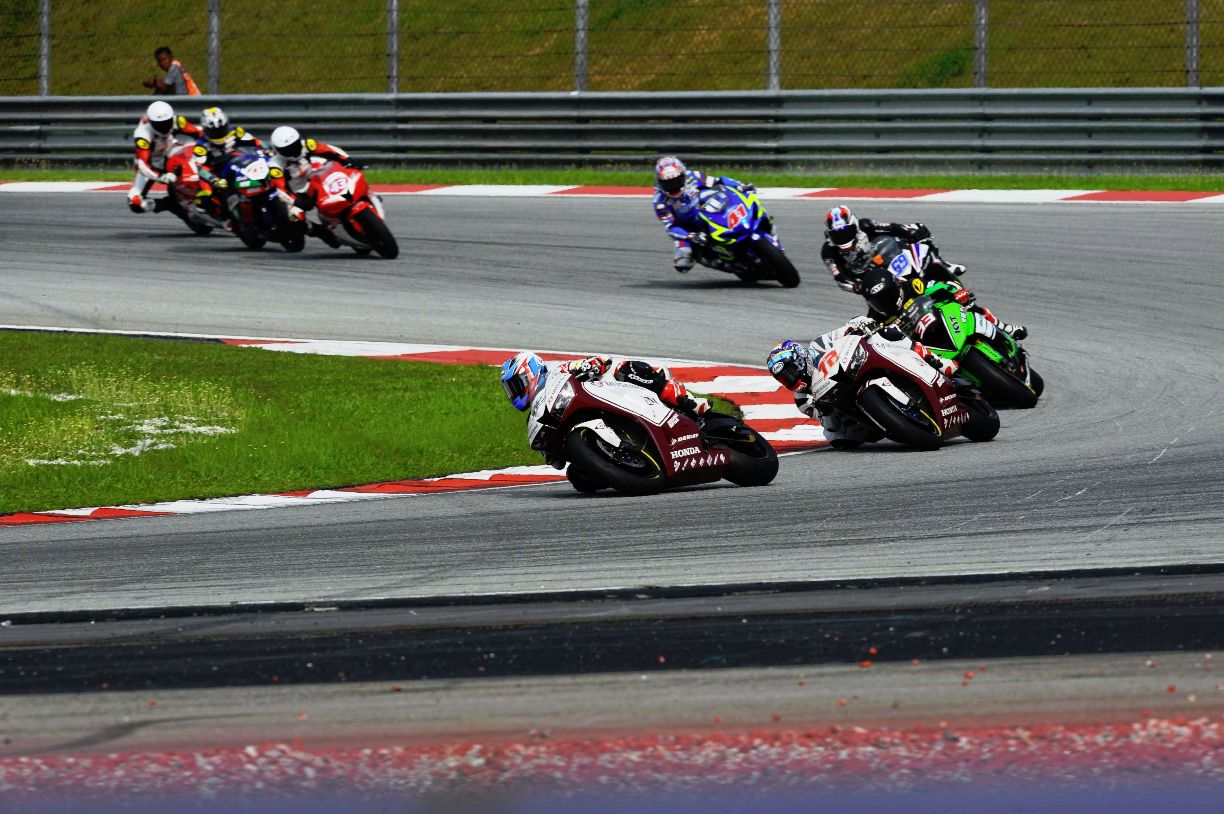 Race 2 saw all three Thai riders, Apiwat, Vorapong and Nakarin Athiratphuvapat pressured Takehiro into making a mistake at the final turn, making it a Thai affair. Apiwat clinched the chequered flag in 20’45.779s followed by Vorapong with 20’45.865s and Nakarin third, 20’45.870s.

Apiwat now leads the Asia Production 250cc standings with 45 points with Takehiro and Vorapong in tow, bagging 38 points and 36 points. 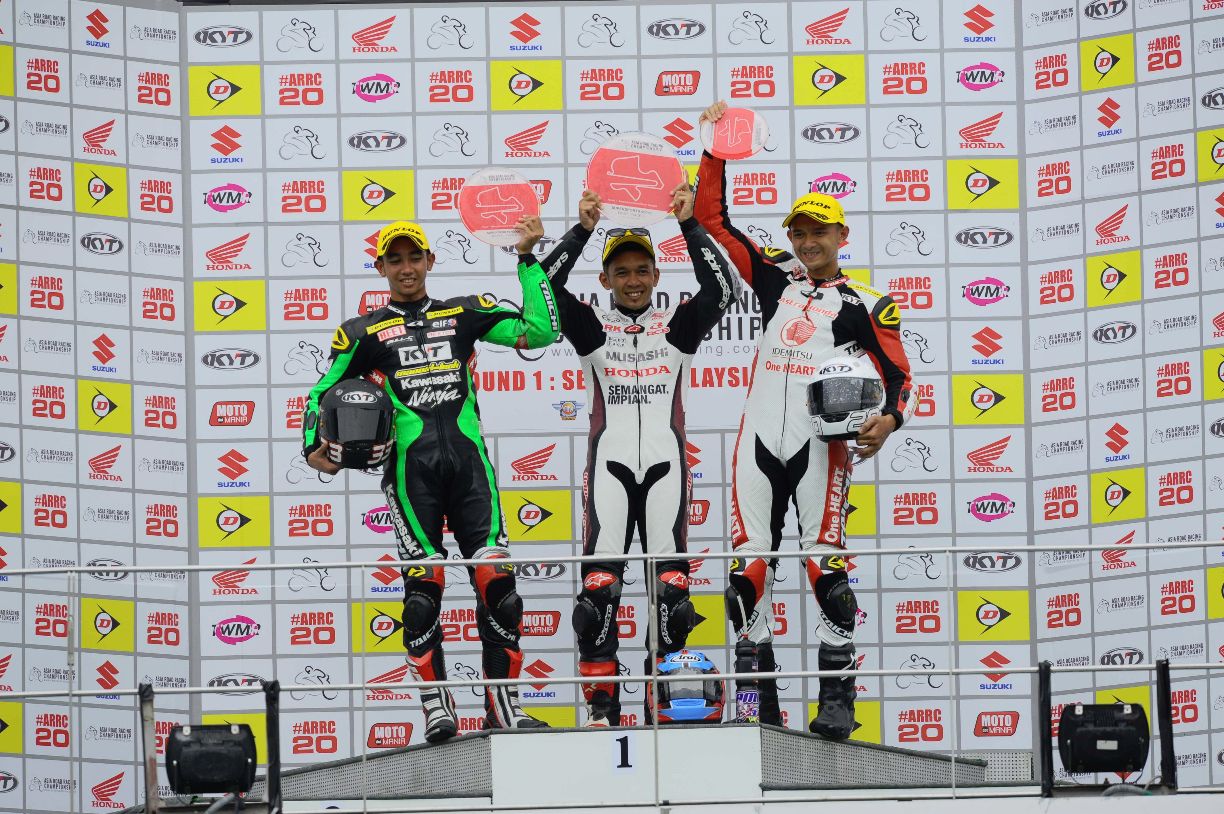 In the last of the open-make category, wildcards Abdul Muhaimin Rosland and Ahmad Fazli Sham did their supporters proud as the PETRONAS Yamaha Maju Motor each took a win in the Underbone 130cc category.

The seasoned contender was hoping to score another win in Race 2 but his engine gave in with three more laps to go and this gave Muhaimin the perfect opportunity to steal the chequered flag in 19’17.609s. Norizman Ismail (Harian Metro Y-TEQ SCK Honda Racing) made up for the crash he suffered in Race 1 and finished second in 19’17.642s while reigning Underbone 130cc champion, Gupita Kresna (Manual Tech KYT Rextor) took third in 19’17.732s.

Having finished both races on the podium, Muhaimin leads the Underbone 130cc standings with 41 points ahead of Hokky and Fazli Sham with 33 points and 25 points respectively.

Moving to the developmental series, female racer, Muklada Sarapuech put on a brilliant show to overpower her superior male rivals and win Race 2 of the Asia Dream Cup (ADC).

Muklada won the 14-lap gruelling race during the sprint to the finish line, wrapping it up in 19’04.764s ahead of Japanese duo, Yusuke Nakamura and Hiroki Nakamura who had to settle for runner-up positions with 19’04.780s and 19’04.918s.

Earning 41 points from this weekend puts Muklada on top of the overall standings, at a tie with Hiroki followed by Yusuke in third place with 40 points.

Lastly Race 2 of the Suzuki Asian Challenge (SAC) saw Indonesia sweep the podium steps while the dominant Patis Chooprathet who aced the practice, qualifying and Race 1 on Saturday retired after two laps.

The race that was restarted with 11-laps after a heavy crash involving Zulhilmi Yazid and Jagan Kumar shortly after the lights went out saw Andreas Gunawan win with 16’15.754s followed by compatriots, Adhi Chandra second and Dedi Kurniawan third in 16’15.758s and 16’16.257s respectively.

Having finished Race 1 second and Race 2 as winner, Andreas now leads the SAC standings with 45 points, two points ahead of Adhi with Patis coming in third with 25 points.

Round 2 of the FIM Asia Road Racing Championship will be held at the Sentul Circuit in Indonesia from 4 to 7 June.