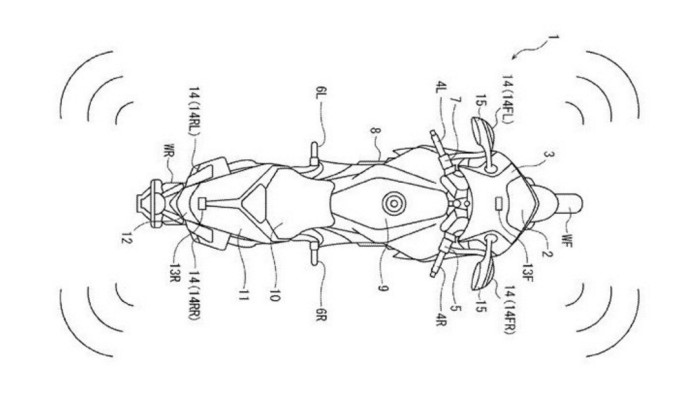 Besides the next generation Honda DCT, the might red wing marque is currently pressed at developing yet another piece of motorcycle technology, this time focusing on safety instead in the form of a Blind Spot Warning System for bikes.

Honda recently filed a patent (featured image) for a system that utilises both cameras and short-range radars designed to detect vehicles in a motorcycle’s typical blind spot areas and warn its rider about it. Based on the patent sketch, the system appears to be an independent unit as it does not rely on communication with other vehicles or existing traffic infrastructure, thus fuelling its dependability further.

However, it is worth noting that Honda isn’t the first manufacturer dwelling into this safety tech. Rivals BMW Motorrad spearheaded this first with its BMW Side View Assist system that is primed in the updated EU-spec 2016 BMW C 650 Sport and C 650 GT maxi-scooters. (PS, both scooters just arrived in our market  this week. Read about them here.)

The system developed by BMW Motorrad differs from Honda’s as it uses a series of four sensor arrays, which is similar to the marque’s parking sensor system’s hardware – likely radar based. The effective range of each sensor is about 5 metres at speeds not exceeding 10km/h over the scooter’s current speed, with two placed at the scooter’s front end and another pair in its tail section.

The principles remains the same with Honda’s system, but it is reportedly capable of detect motorcycles, passenger cars, vans, trucks and other vehicles in the rider’s blind spot. Then, warning lights placed in the handlebars or dashboard will warn riders of the danger and allow riders to take appropriate measures and reaction to avoid collision.

Rumours also indicate the possibility of haptics feedback integrated in Honda’s Blind Spot Warning System. The rumours indicate that alerts are being set as vibrations that will be triggered in the corresponding grip of the bike or perhaps other parts that are in contact with the rider’s body.