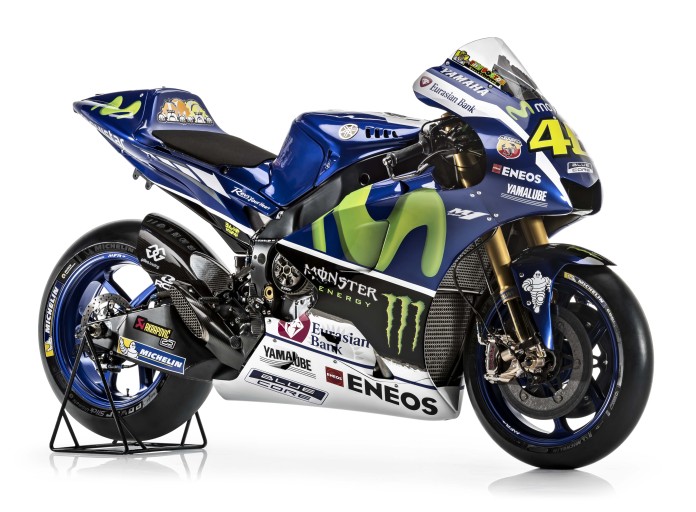 Besides its WSBK program, Yamaha also unravelled its updated 2016 MotoGP team colours in Spain. Besides its new set of 17-inch wheels and accompanying Michelin tyres, it appears little has changed with for the Movistar Yamaha Factory Racing team’s overall outlooks.

Here is a full technical readout of the lightly updated Yamaha YZR-M1 GP bike that both Valentino Rossi and Jorge Lorenzo will master this season:

Of course, much of the changes lie beneath the YZR-M1’s pretty carbon fibre skin, most notable here being the FIM-controlled Magneti Marelli ECU running the unified team software. For most teams and riders (Yamaha included), the biggest hurdle lies in coming to terms with the new regulated electronics.

The other challenge comes from new-for-2016 Michelin tyres that replace the previous spec-tyre supply from Bridgestone. Winter testing reports indicate that the new Michelin tyres offer tremendous rear grip levels whilst front-end grip is somewhat lacking ¬– this being the total opposite nature of the previous Bridgestone spec-tyres.

Nevertheless, the true test lies in the upcoming Sepang test session next month. This is where we’ll see which rider has managed to master his riding style with the new tyres and electronics.

Whilst Spaniard Jorge Lorenzo sets himself to defend his world championship title, teammate Valentino Rossi will likely mount a good challenge this season. Rossi’s contract with the Movistar Yamaha Factory Racing outfit reported lasts until the end of this season, and word has it that this could be the Italian superstar’s final season. Rossi could be looking to go out on a bang by claiming his elusive 10th world title here as well.

With the aforementioned changes in tyres and electronics, it will be interesting to see how Lorenzo and Rossi will fair against each other this year. We’ll have more once we gauge the performance of both Lorenzo and Rossi during the upcoming test session in Sepang.

In the mean time, feast your eyes on the extensive (and hi-res!) images we’ve prepared below for your viewing pleasure.