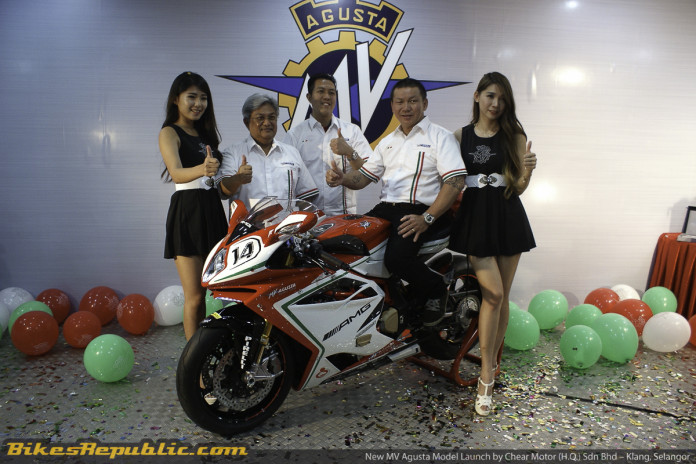 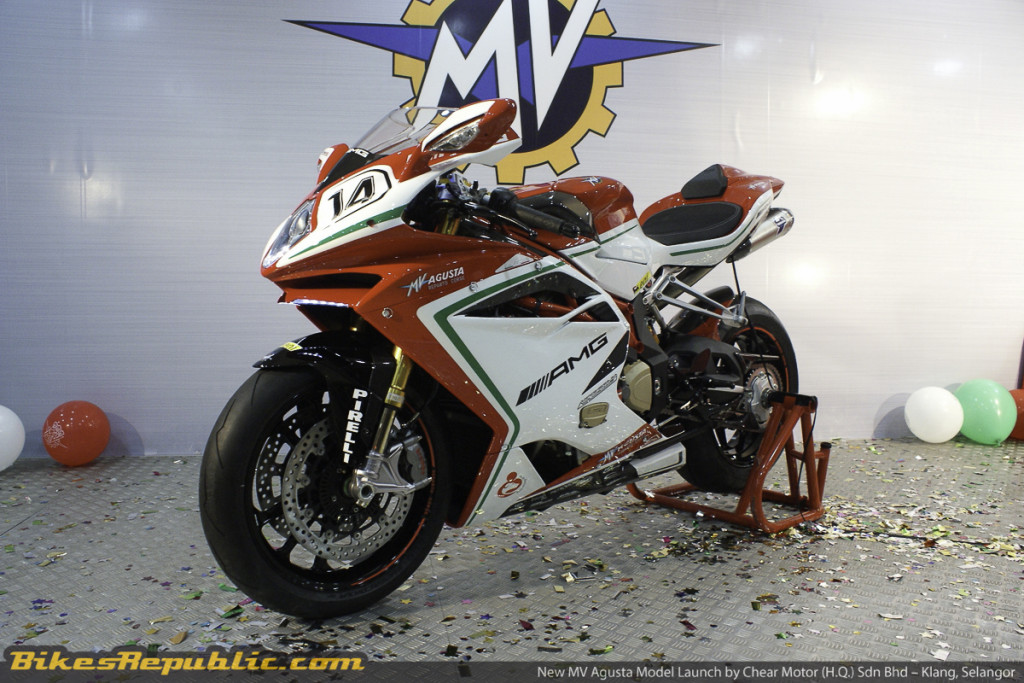 The sexy foursome of bikes is comprised firstly with the Stradale 800 sport-touring model, followed by the Turismo Veloce 800 and Turismo Veloce 800 Lusso sport-adventure twins, whilst the Italian brand’s flagship F4 RC superbike caps things off.

All four models were launched in Chear Motor’s main outlet in Klang, Selangor during a specially organised event for press members and selected customers. Here’s a detailed look at all four new models.

Unlike the Rivale, the Stradale boasts revised rider ergonomics with a lowered height, an adequately larger plexiglass windscreen for increased rider comforts and a pair of bags for added practicality. 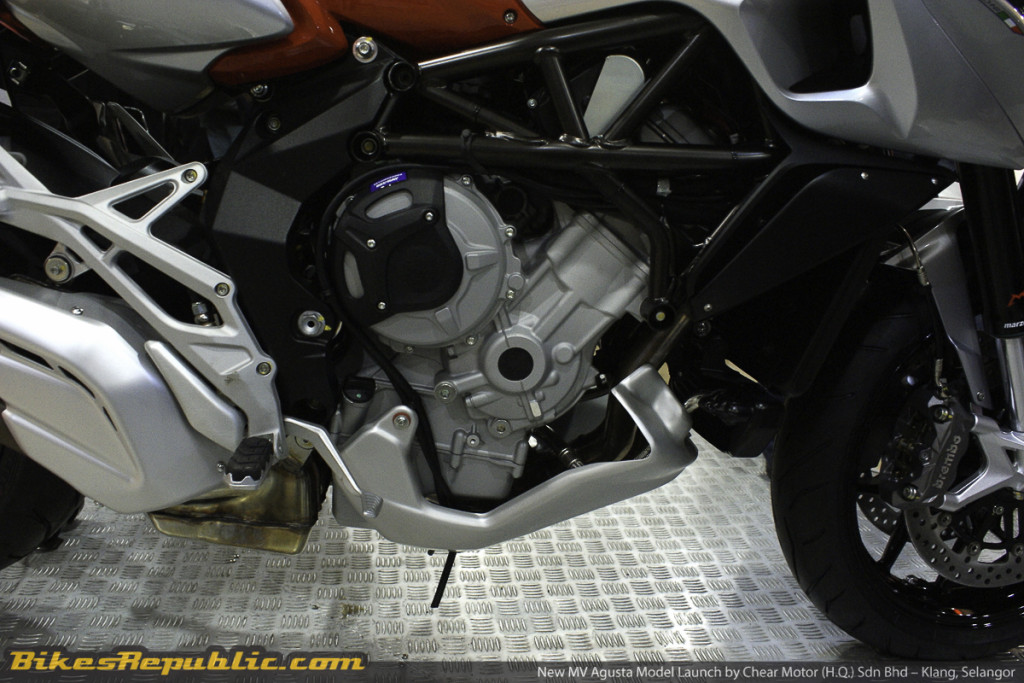 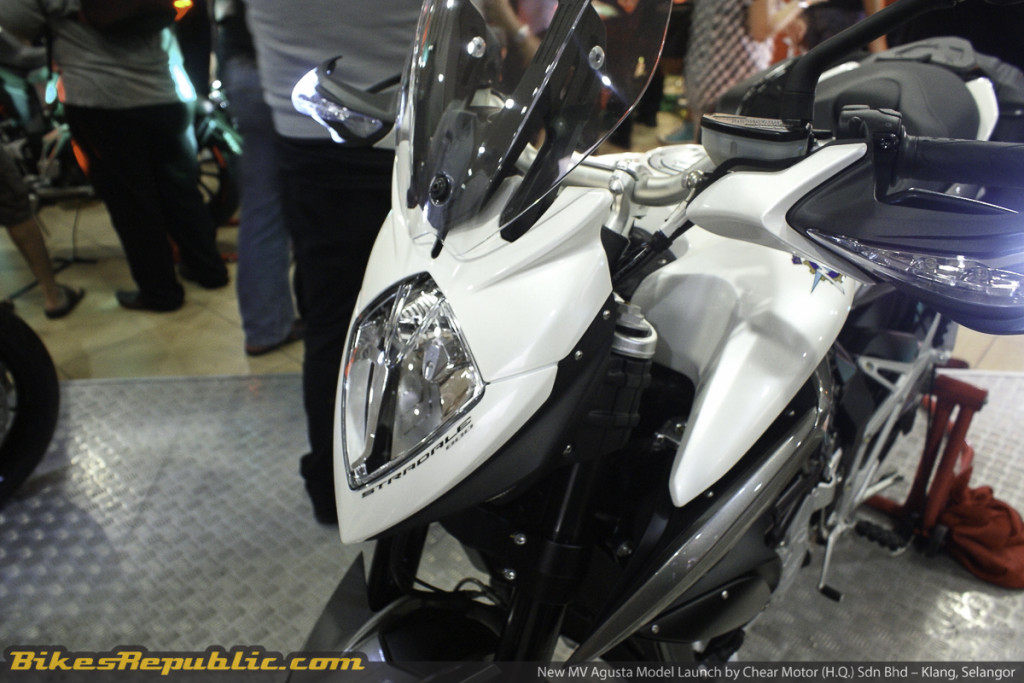 The mill is encased within a specially designed chassis that features a single-sided swingarm, with its wheelbase extended by 30mm over the base Rivale, plus a larger 17-litre fuel tank that offering increased range. Suspended with a pair of adjustable upside-down Marzocchi forks up front and an adjustable rear monoshock, both units offers up to 150mm of travel, offering increased comfort and handling versatility. 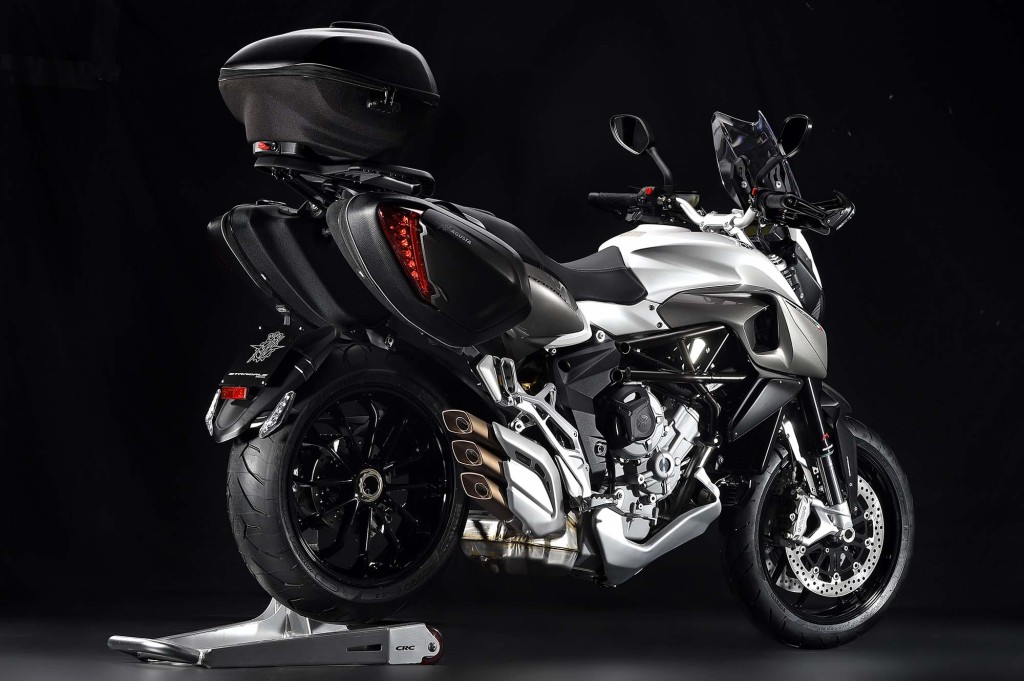 Other highlights in its features list include the Bosch 9 Plus ABS braking suite with Rear wheel Lift-up Mitigation (RLM), MV Agusta’s MVICS ride-by-wire electronics suite, as well as the EAS 2.0 quick-shifter unit.

Available for booking and purchase via Chear Motor, the MV Agusta Stradale 800 is priced on-the-road with insurance and registration costs at RM99,917.

Featuring design cues from both of MV’s flagship superbikes, the F3 and F4, the stylish new entry in the sport-adventure segment is set rival against favourites such as the BMW F800 GS and Triumph Tiger 800. 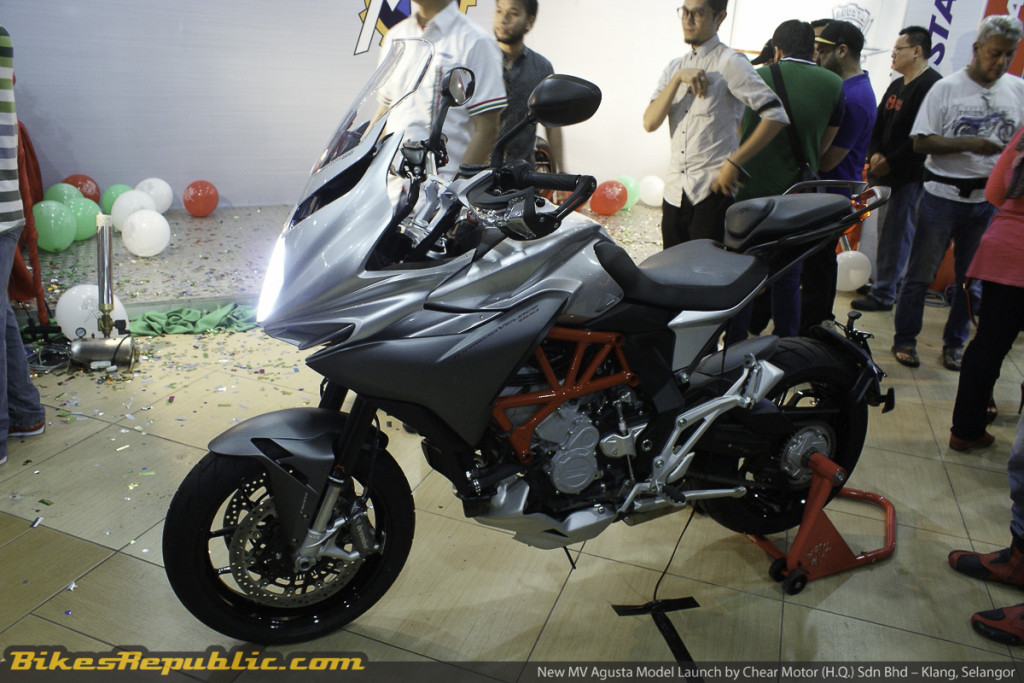 Again, the MV Agusta brand’s signature 798cc triple-cylinder mill powers both bikes, offering 110hp and peak torque of 80Nm instead in this pair of sport-adventure models. Paired to the mill is a six-speed transmission whilst electronics aids such as EAS 2.0 quick-shifter, traction control and the MVICS 2.0 suites plus a 5-inch TFT colour screen with Bluetooth connectivity and a 12-volt socket are standard in both variants. 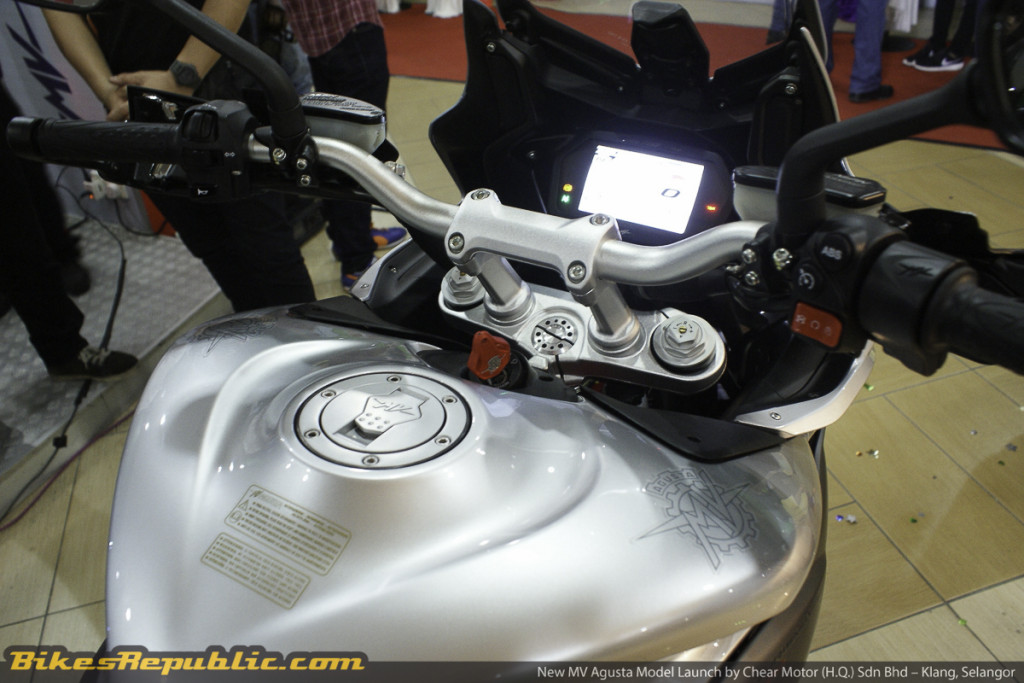 The biggest difference between the standard and ‘Lusso’ (Luxury) variant lies in the suspension system. The range-topping Turismo Veloce 800 Lusso is primed with semi-active electronically controlled suspension that offers increased versatility and riding comfort levels. Besides that, the Lusso variant also adds heated grips, a centre-stand, as well as a built-in GPS sensor added into its package as well. 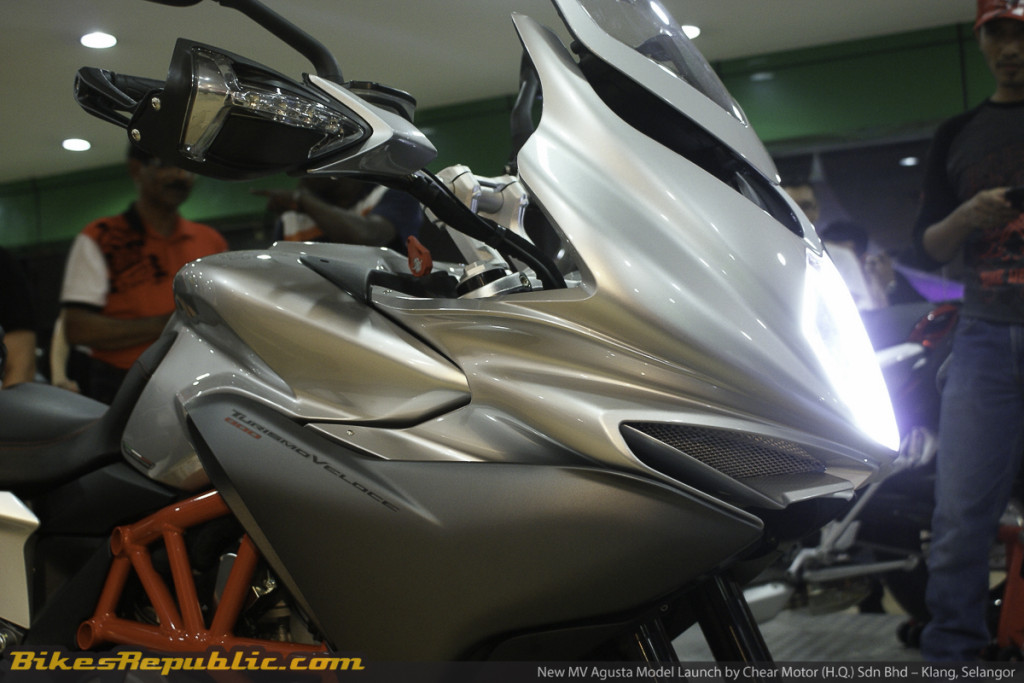 Sans the optional panniers, Chear Motor has set the on-the-road prices for the MV Agusta Turismo Veloce 800 and its higher-spec Lusso sibling at at RM111,129 and RM121,146 respectively. 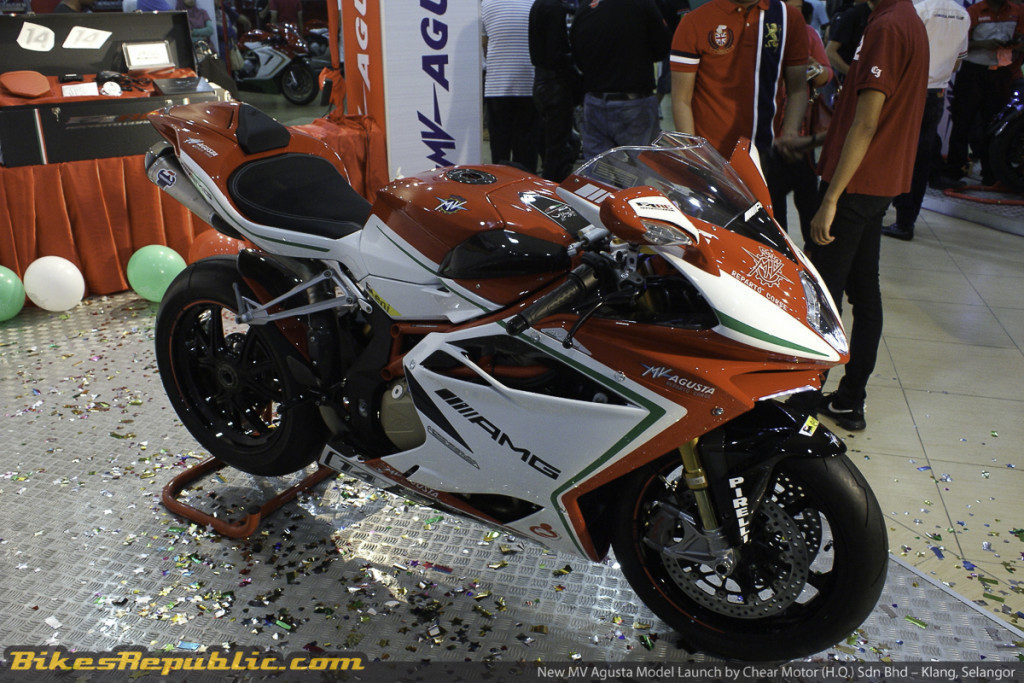 Highlights include carbon fibre fairings, titanium connecting bolts and exhaust, a lithium-ion battery, forged aluminium wheels, as well as the adoption of magnesium casings. All this sees the RC tip the scales at just 175kg (dry) – nearly 15kg lighter than the brand’s F4 RR model. 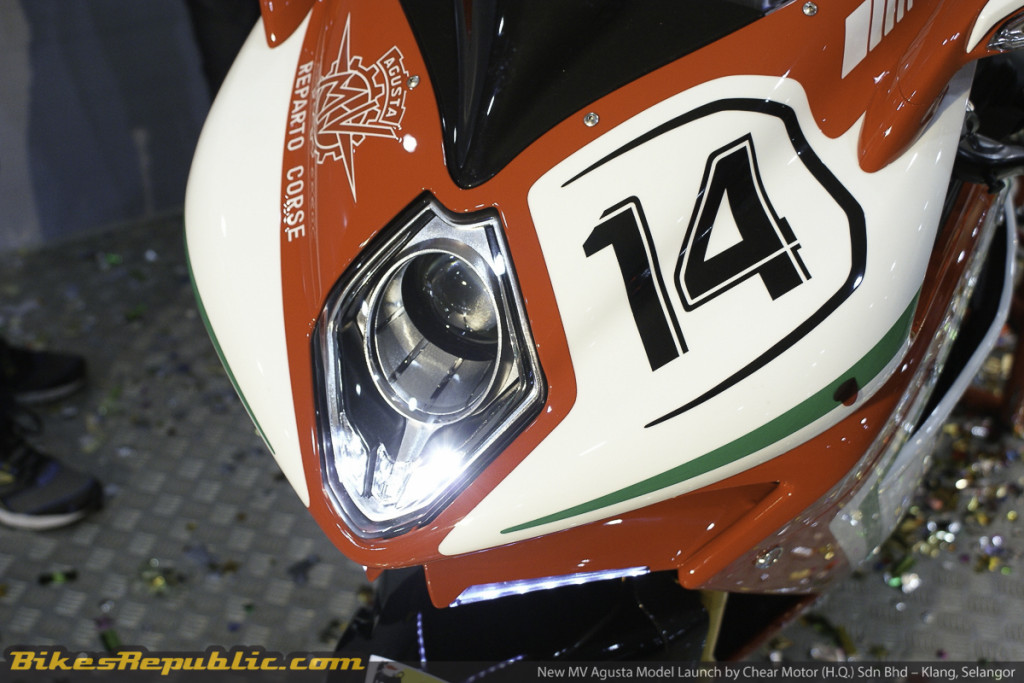 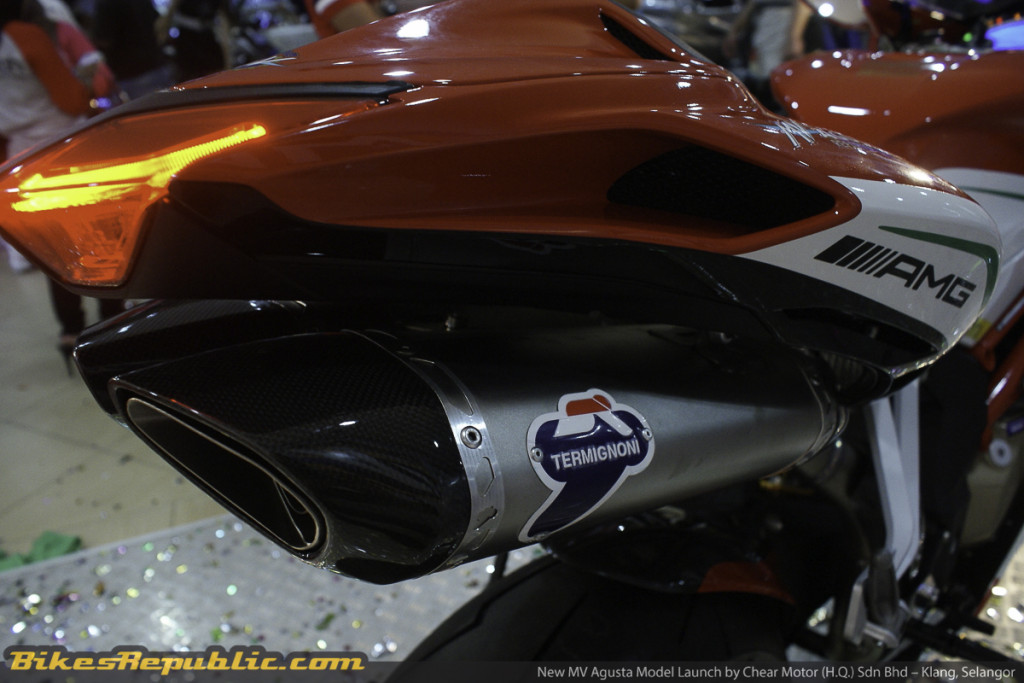 Of course, the highlight of the F4 RC is its highly tuned powertrain. develops a total of 212hp as a result of a new Termignoni race exhaust system. A street variant is also available, but it makes just 202.5hp sans the aforementioned Termignoni pipeworks. Both trims however share the same peak torque output of 115Nm.

Limited to just 250 units worldwide, Chear Motor only brought in two units for the Malaysian market, but did not directly disclose a sale price. However, our sources within Chear Motor suggest that the MV Agusta F4 RC is able to fetch an estimated asking price of around RM200,000.