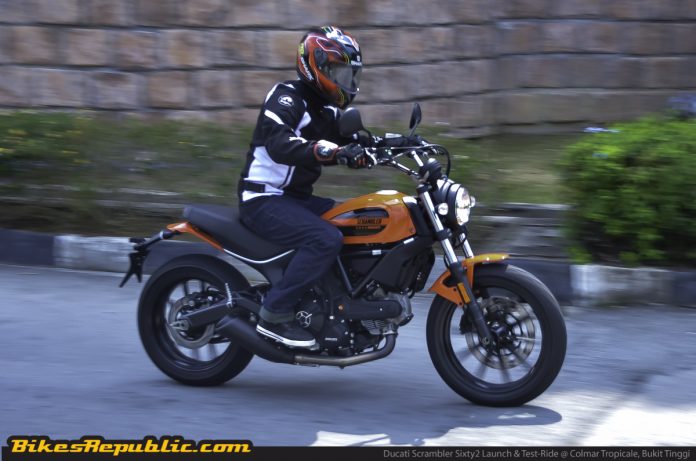 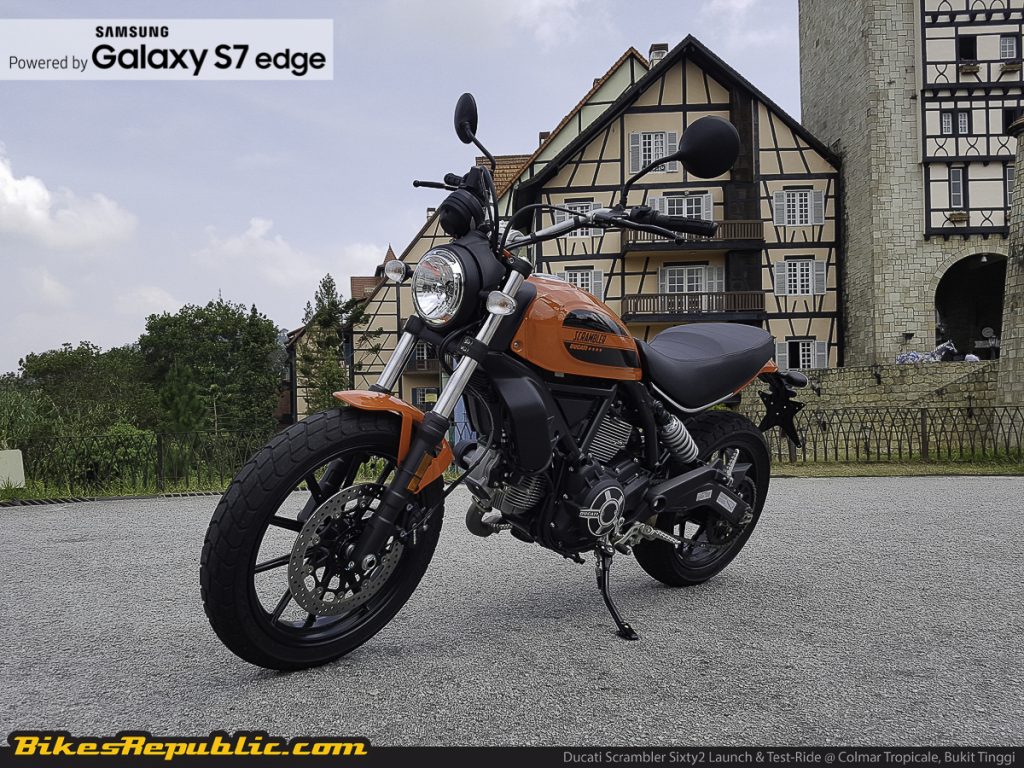 Loyal followers would’ve probably seen our quick walkthrough videos posted on both our Facebook and Instagram pages from the brief test-ride session we took part in shortly after the launch. 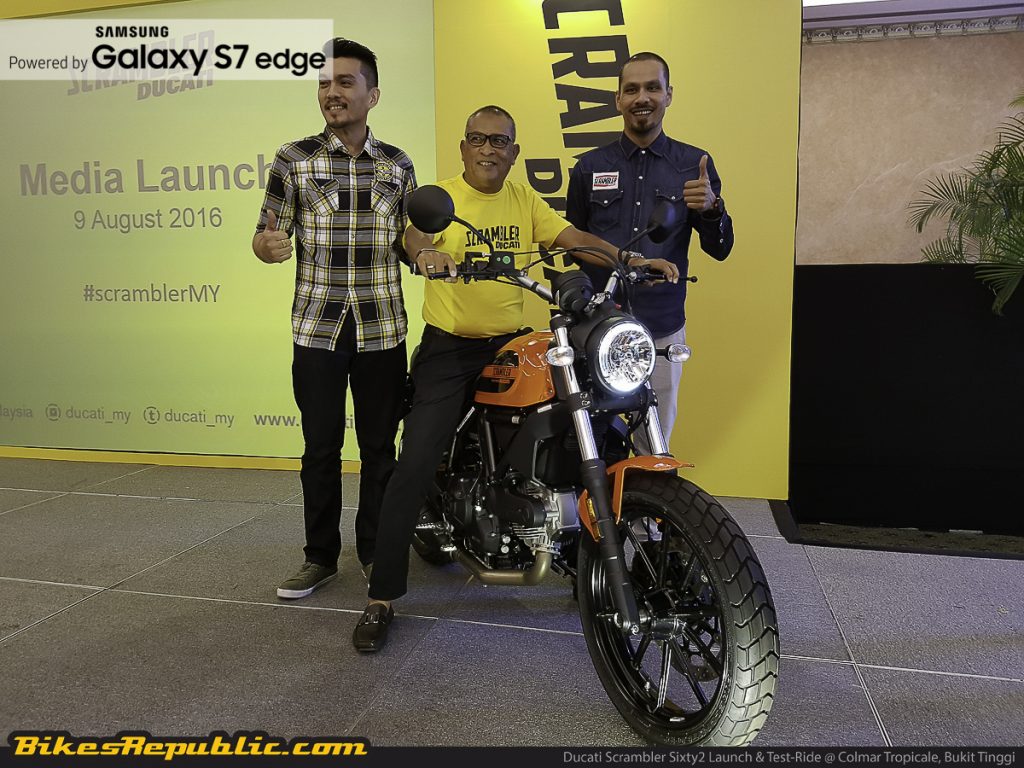 The baby Scrambler arrives with a princely price tag that starts from RM49,999 without GST. Yes that’s a lot of money for a seemingly ‘small’ bike with an equally small 399cc V-twin (or L-twin to all you hardcore Ducatisti).

But before you jump to any conclusions, here’s what you ought to know about the new baby retro bike from the famed Italian marque’s lifestyle sub-brand. 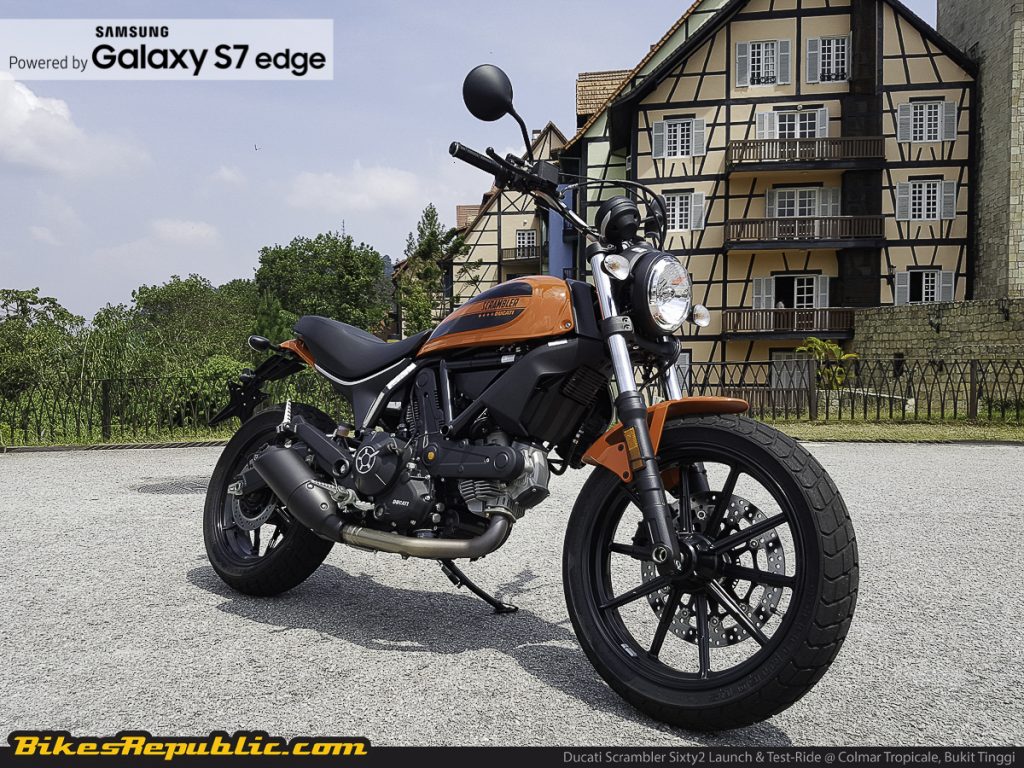 For starters, the Scrambler Sixty2 isn’t as small as you might think. This baby model retains the same tubular steel trellis frame as its larger 803cc siblings. It does benefit with a 15mm wheelbase extension at 1,460mm, followed by a slightly larger 14-litre fuel tank instead of the 13.5-litre unit its siblings has. 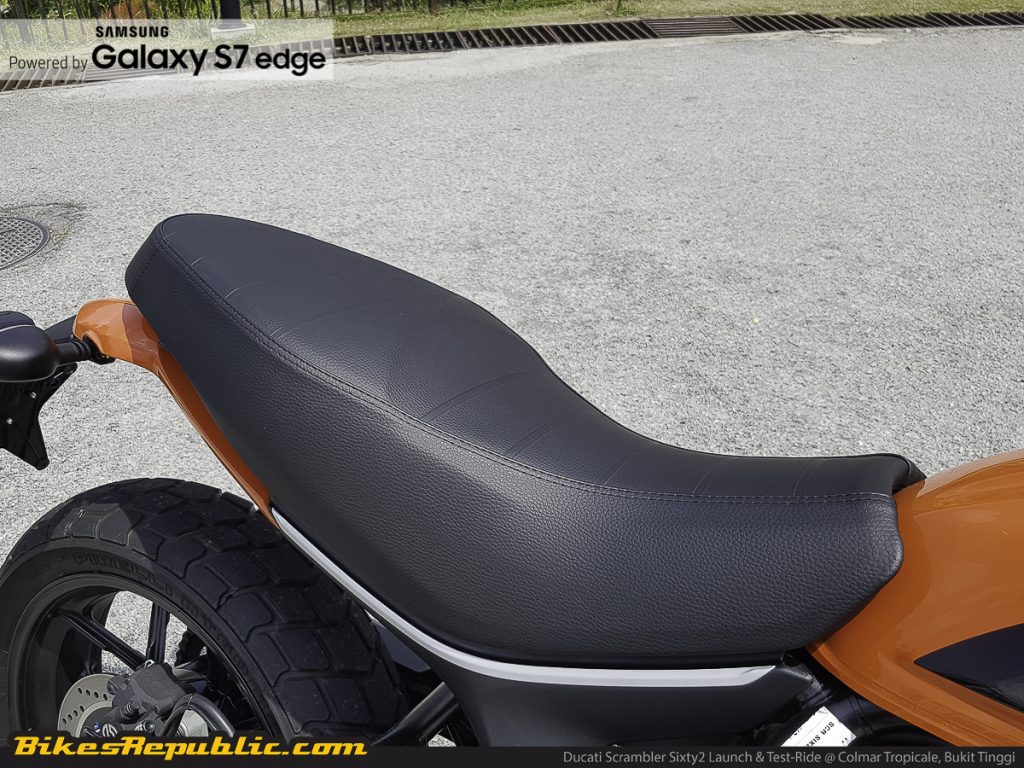 The low seat height of 790mm and the overall ergonomics also remains unchanged in this baby model, welcoming just about anyone to hop on and go – ladies or Desmodonnas included. What felt good here too were the tall and wide handlebars plus the seemingly natural positions of the footpegs. 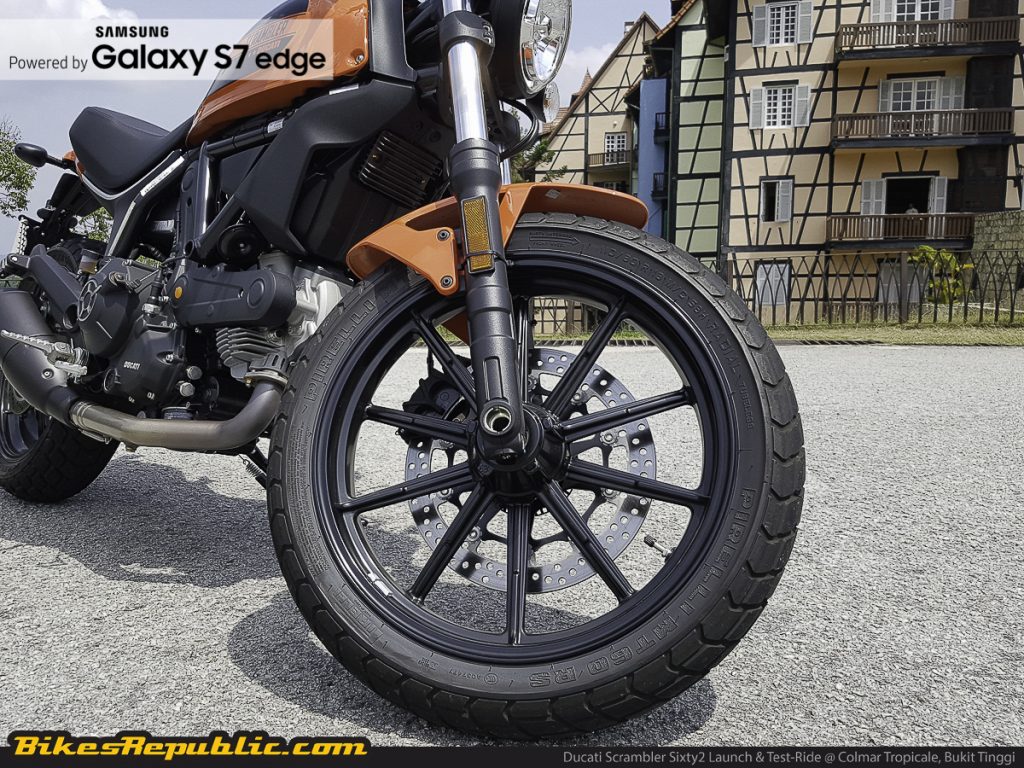 Upon closer inspection, the Scrambler Sixty2’s  differences from its siblings lie in some of the major hardware primed on board. Notable differences include the smaller 320mm front disc brake, the narrower and smaller 160/60R17-profile rear tyre, as well as the adoption of traditional Showa 41mm front forks. 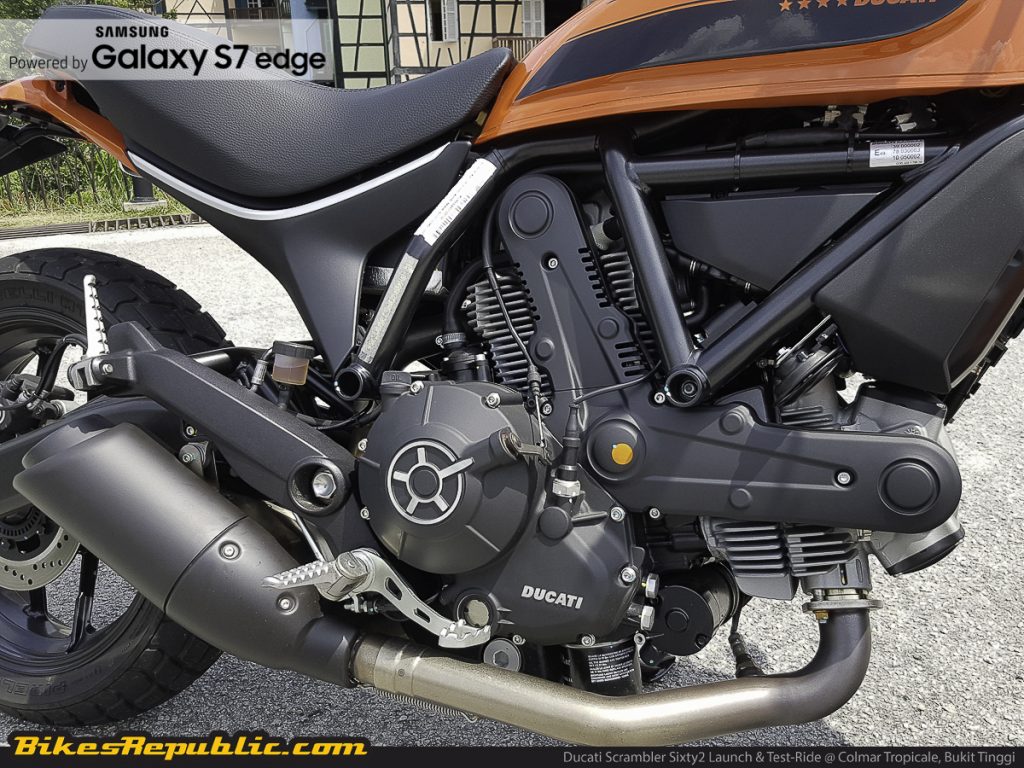 The biggest difference of course is the downsized 399cc air-cooled Desmo L-twin powerplant. This, along with other small changes all round, grants the Scrambler Sixty2 with a lighter claimed kerb weight of 183kg – 6kg less from the 803cc iterations. Beyond this, everything else remains identical to its 803cc siblings overall.

While it may not sound like much on paper, the 6kg diet made a huge difference once we got the Scrambler Sixty2 going during our brief test-ride session across some of Bukit Tinggi’s twisty B-roads. Unlike its heavier 803cc siblings, the Scrambler Sixty2 felt much more nimble and easier to chuck about, especially in the bends. 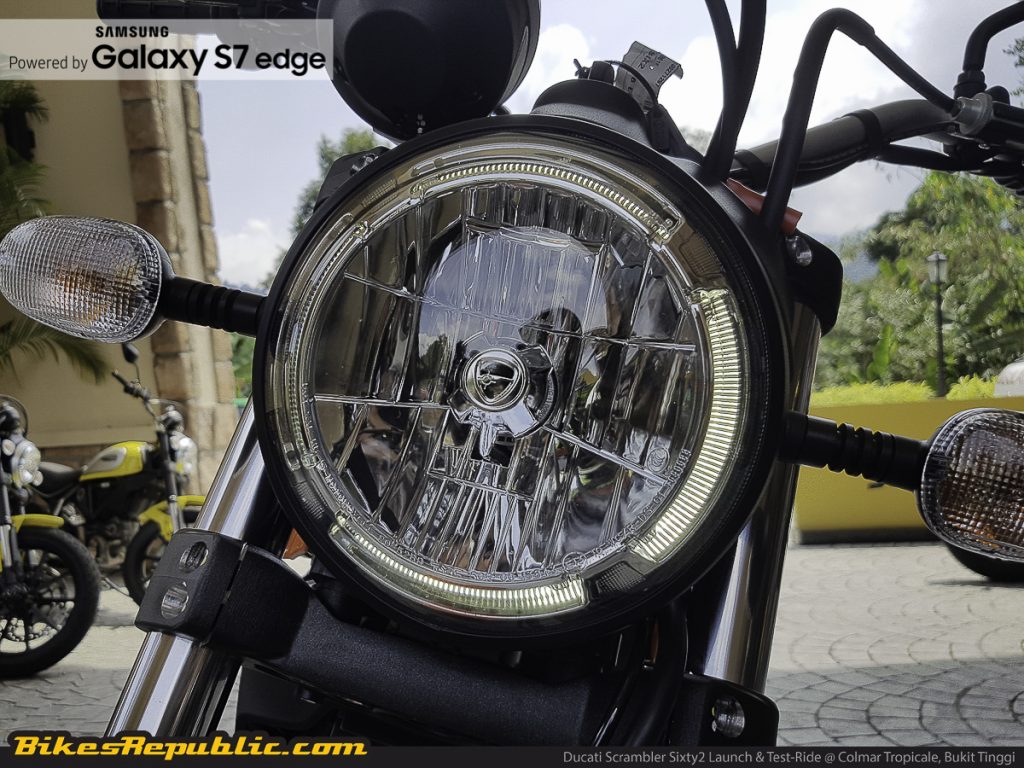 Even with traditional forks up front, the Scrambler Sixty2 still offered a supple ride similar to its 803cc siblings. Grip from the Pirelli MT 60 RS tyres are great too whilst the brakes, though smaller at the front in this variant, offered plenty of bite whilst being easy modulate at the levers.

What felt very equally obvious here though was the downsized 399cc powerplant’s deficit in power and torque. To put it simply, you won’t be baiting Panigales, Monsters or even Hypermotards with the 41hp and 34.6Nm of torque available from the Scrambler Sixty2’s powertrain. 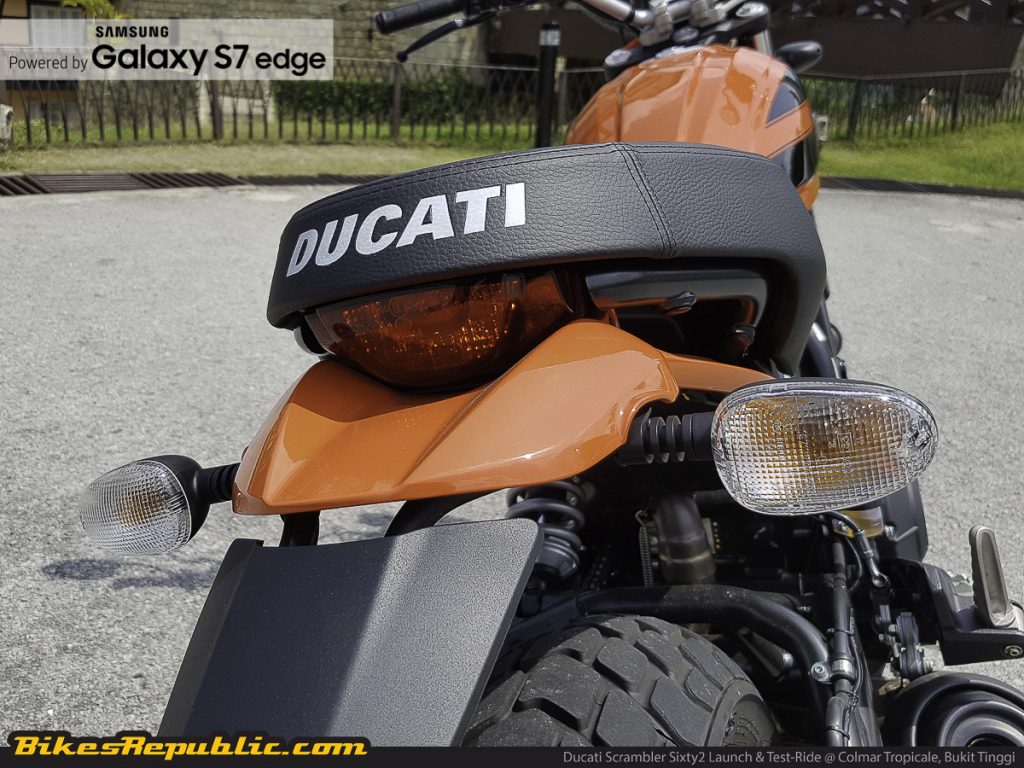 Nevertheless, this is a free-revving V-twin that favours peak power and torque delivery at higher revs, which means you’ll have just as much fun here too. Adding to this is the feather-light action of both the clutch lever and the six-speed transmission’s foot control, granting a stress-free ride as well. 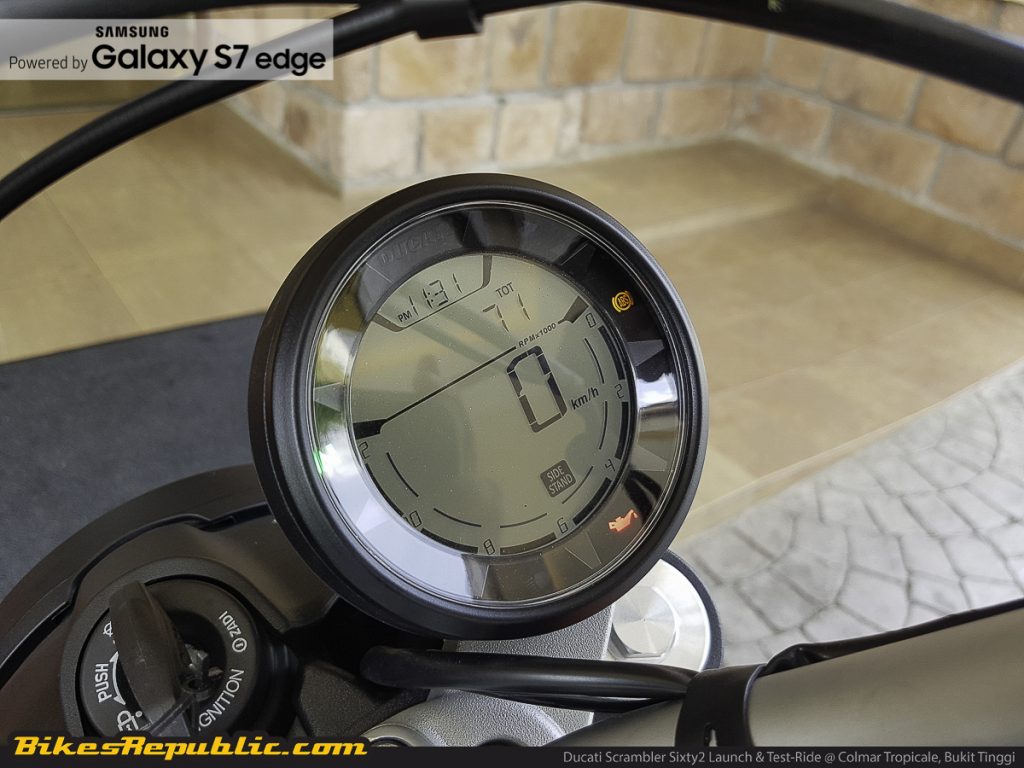 There are still a few niggles though like the non-existent wind protection and the absence of a gear indicator in digital instrument dial. But these quirks, plus the lower performance abilities, are easily offset by to the Scrambler Sixty2’s confidence-inspiring handling and greater controllability over its larger siblings.

Couple this learner/novice-friendly package with the vast catalogue of lifestyle accessories and gear available, the Scrambler Sixty2 will please both hipsters an non-hipster alike indeed. However, the biggest hurdle lies in meeting the steep asking price of RM49,999 (basic without GST) it commands. 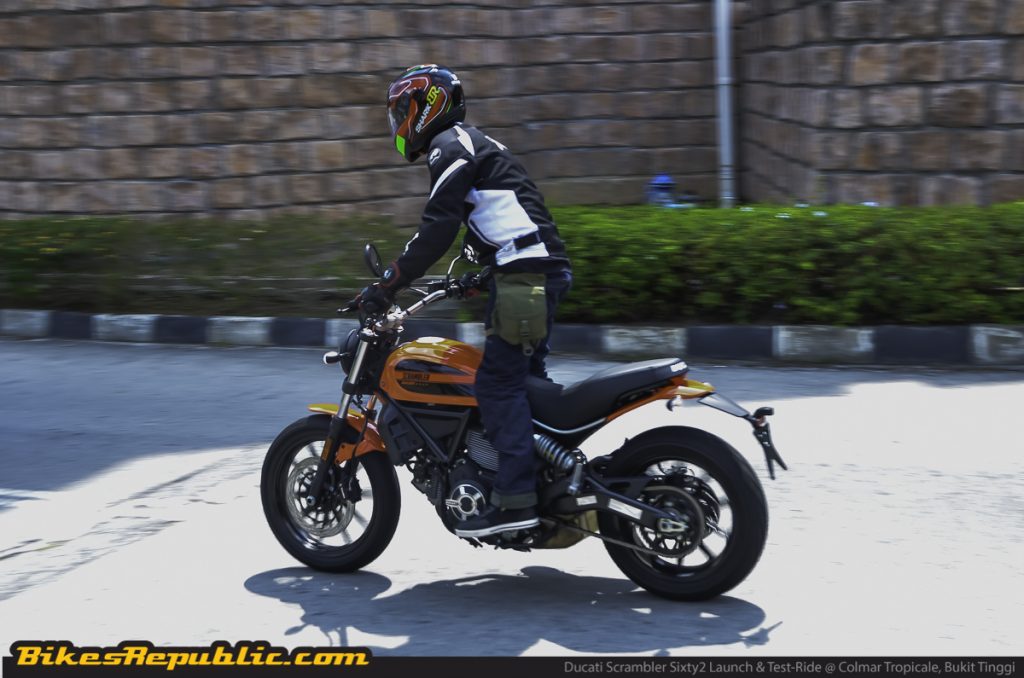 Yes, that’s a lot of money and you’d still need a B-full license to own and ride one. But if you fancied the coolest things in life, and you had a bank account that allowed you have them, then the Scrambler Sixty2 may just be worth the effort of getting your B-full license done.

We reckon the Ducati Scrambler Sixty2 would perfectly serve as an urban runabout for the style-elite with bank accounts to sate their apetite, but we’ll reserve further judgement until we conduct a proper long-term testing stint with it – something we’re anxiously waiting for right now.