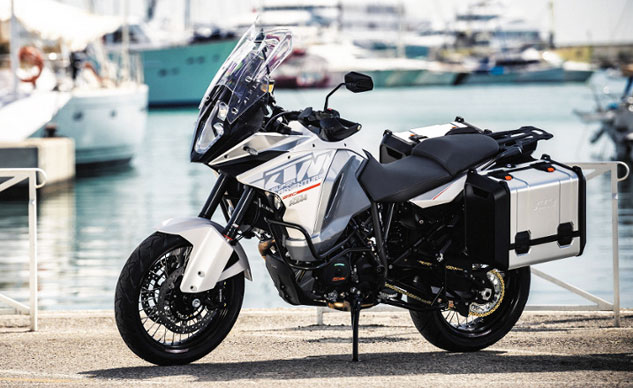 The cat is out of the bag as KTM releases the first official image of its upcoming 1290 Super Adventure.

As the name and image suggests, this new adventure bike will perhaps feature a larger and more powerful 1,301cc V-twin heart derived from the manic Super Duke R. KTM is set to slot it alongside the 2015 1190 Adventure and Adventure R models.

The Super Adventure’s mill will be fed from what KTM describes as “an incredibly large fuel tank” fitted.

It will also be equipped with Motorcycle Stability Control (MSC) sourced from Bosch, engineered to allow riders to brake safely whilst the bike is leant over. Accompanying the system are ABS brakes, and traction control with selectable riding modes.

KTM did not reveal much more after that, but it did state that the Super Adventure will boast “absolutely unique electronically supported riding assistance equipment.” Perhaps KTM was describing what we just stated in the previous paragraph.

The 1290 Super Adventure will make its debut at the end of next month during the INTERMOT show in Cologne, Germany. More details will be revealed then.