We get ourselves into the hot seat of the Harley-Davidson Project Livewire electric bike in Sepang! 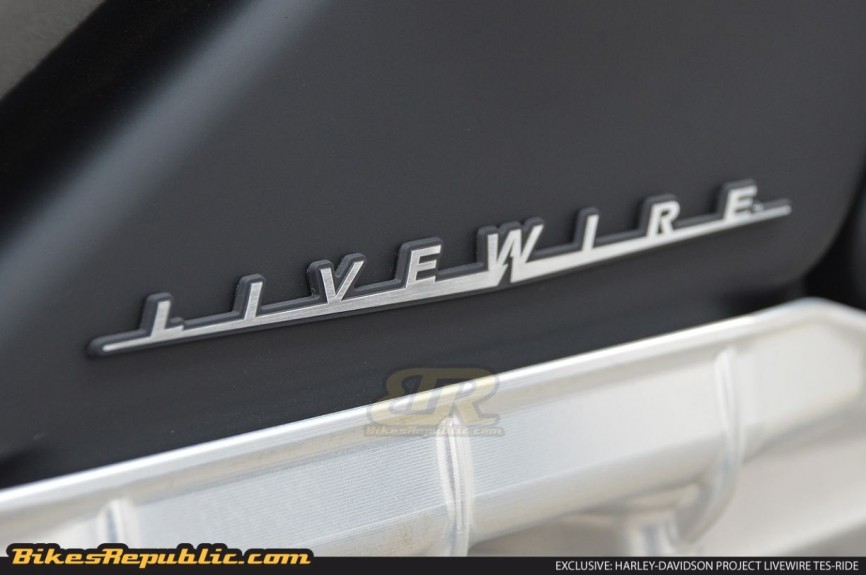 Last year, we brought you news of the Harley-Davidson Project Livewire, the iconic American bar-and-shield brand’s first attempt at making an electric bike. For a brand known traditionally for making perhaps the most desirable petrol-powered highway cruisers and custom choppers, the move was one of the biggest surprises of the motorcycling industry.

Now, before you ask about price and availability, we’ll break the bad news to you first: Project Livewire isn’t for sale… at least for now. Instead, the Livewire is being used by H-D in its ‘Project Livewire Experience Tour’ as a means of presenting and demonstrating the brand’s idea of what an electric bike made by H-D in the near future would be. 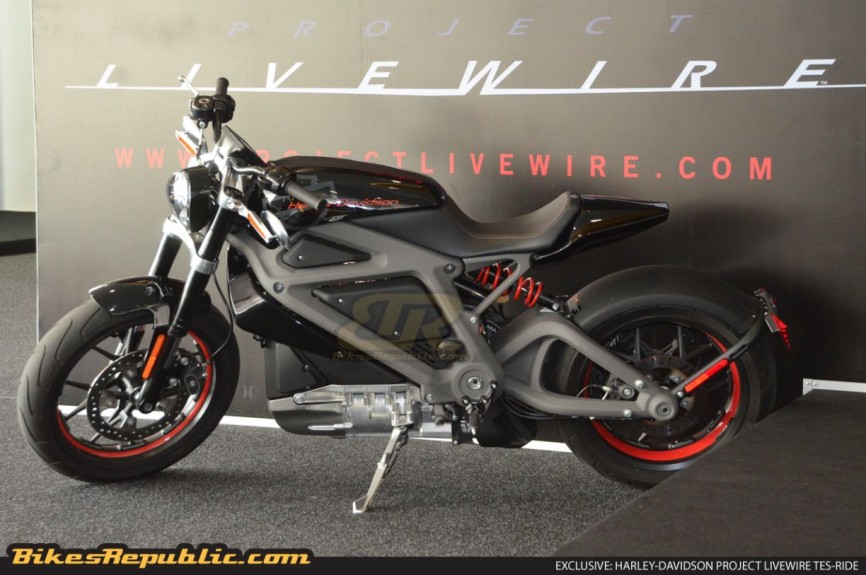 Furthermore, the secondary aim of the tour is to garner real world input and feedbacks from select H-D riders, enthusiasts, and motoring scribes (us included!). All the feedback and input, plus some data, garnered from the Project Livewire Experience Tour would be used by the brand to ‘properly’ develop a desirable and market-able electric-powered series production bike in the future.

So, with an exclusive invite extended to us at the very last minute, we immediately packed our gear and rushed off to the Project Livewire Experience Tour’s only scheduled regional stop in the Sepang International Circuit (SIC) to dissect the hype behind the Livewire first hand. 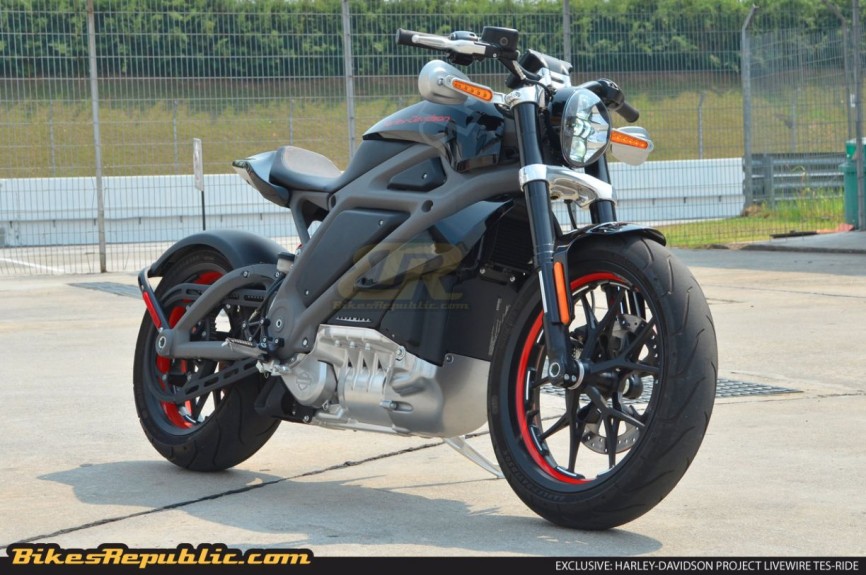 In the flesh, the Livewire demonstrator bike looks good, much better than in pictures really. Though smaller and more compact in size than what we first initially thought, the cool factor here is off the scale. To describe the bike’s overall design, words like ‘radical’, ‘futuristic’, and ‘innovative’ shouts the loudest. While traditional purists may not like it, the Livewire’s design instead appeals better in the eyes of most youths and new generation bikers alike. 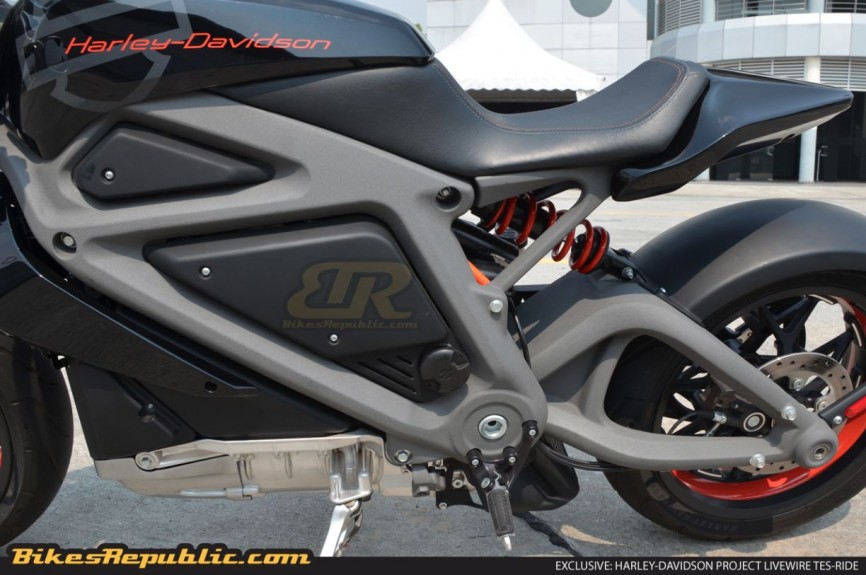 Unlike most other H-D’s, the Livewire sports an exposed cast aluminium trellis frame and swingarm design (H-D’s first all-alloy chassis design), giving it a stance more akin to a streetfighter than a cruiser – very un-H-D-like. 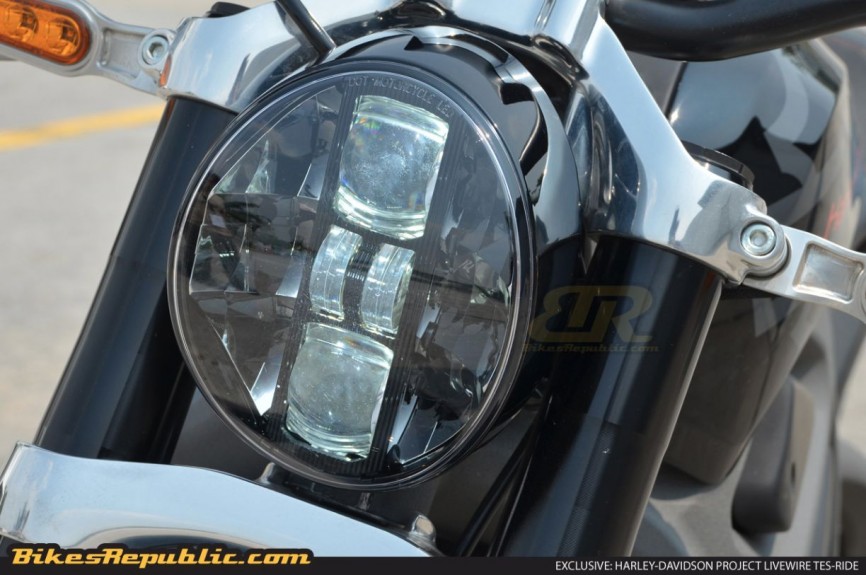 Then comes the rich use of LED lighting, starting with three vertically-stacked in the round headlamp casing, followed by the turn indicator strips housed in the milled billet-aluminium side mirror stalks, and a neatly designed vertical tail light strip in the rear section. 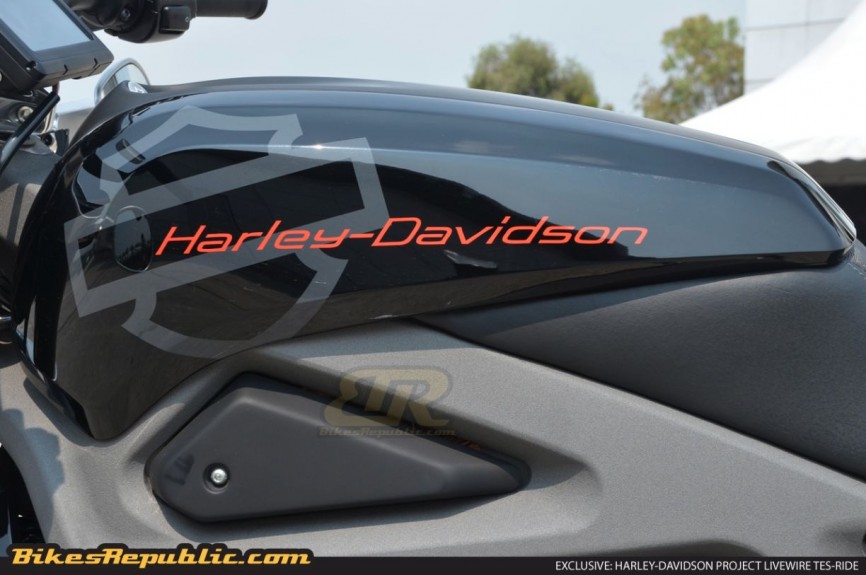 The sharp lines of the tail section, faux fuel tank, and strict single-seater layout further adds to the bike’s overall aggressive stance, matched perfectly with the wide handlebars being mounted low and forward. 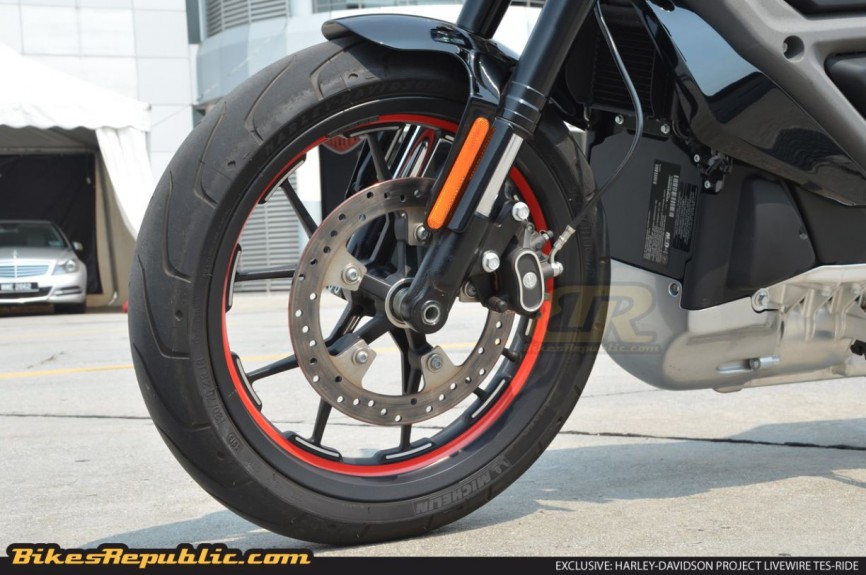 Next comes the set of large alloy wheels measuring 18 inches upfront and 17 inches in the rear. Rounding things off here is the TFT touchscreen instrument panel mounted front and centre, offering clear and bright essential readouts. Fit and finish was also impressive, feeling more like a proper production bike instead of a prototype. 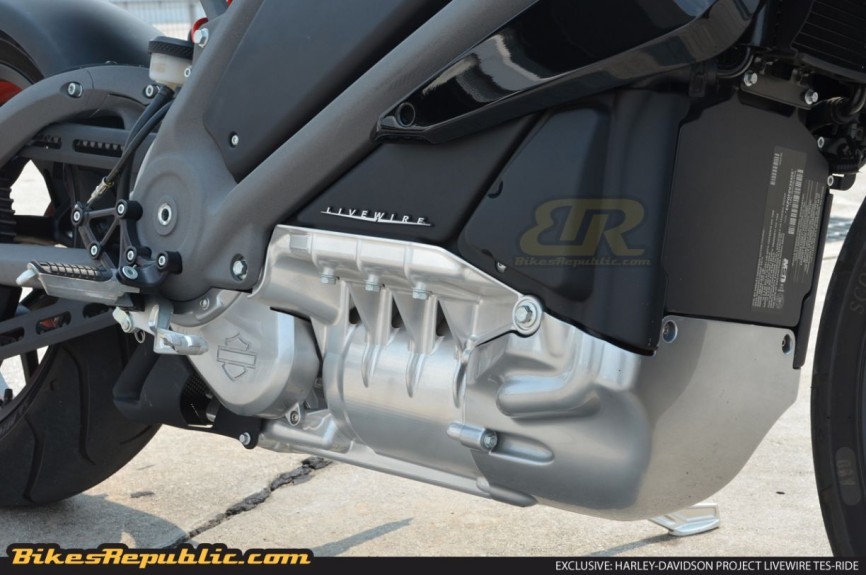 What looks good here too is the electric motor itself. Unlike most other electric bikes that have its motors transversely mounted, the Livewire has adopted a longitudinal mounting orientation instead, resulting its slimmer profile. H-D designers gave the exposed parts of the motor a lot of attention, styling it visually to look more like a traditional mill. Suffice to say, the end result of this actually looks good. 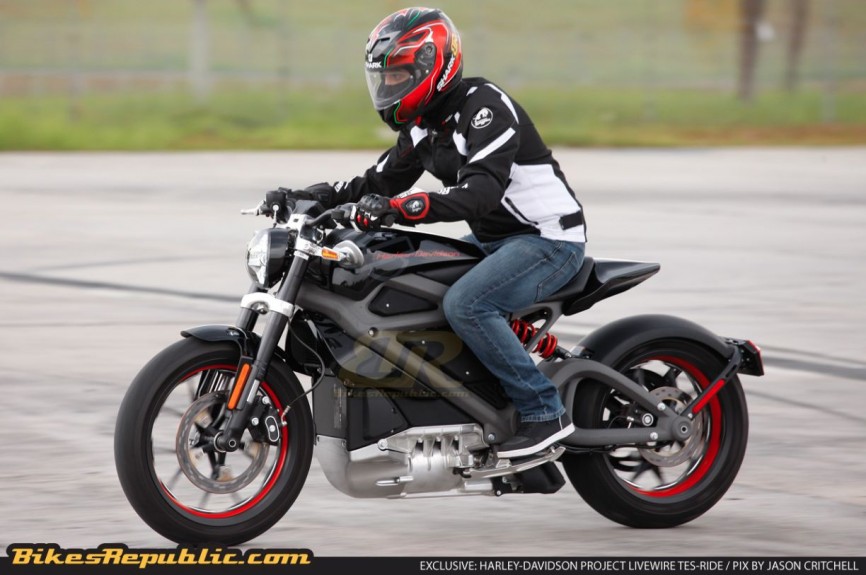 Aesthetics aside, this oil-cooled three-phase induction type or AC electric motor is an engineering revolution. Power is drawn from a Lithium-Ion battery pack stacked above the motor, boasting an estimated capacity of 14kWh given its size and placement. H-D remains coy on the Livewire’s battery specification, but did state that it would take 3 and a half hours to fully charge it via its Level 2, 220-volt input port on the left. 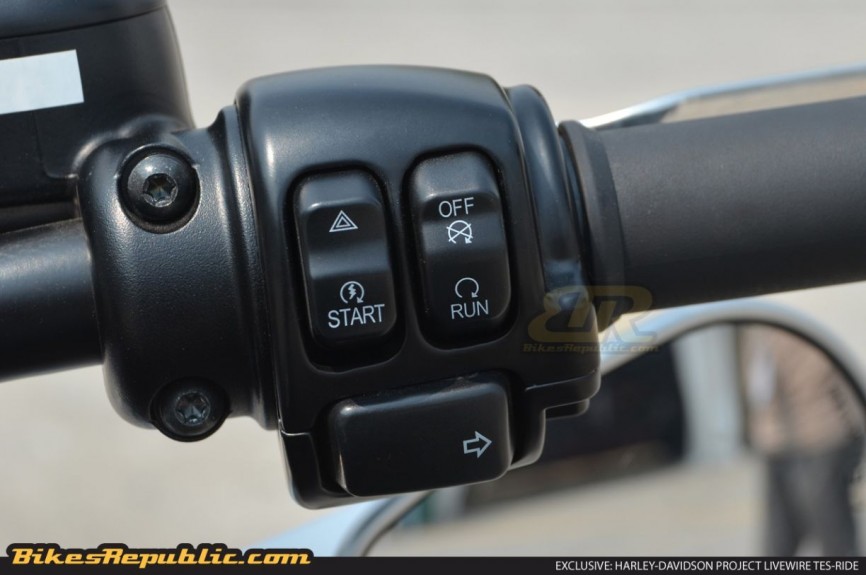 For many, the Livewire’s start-up process is quite an experience. No thunderous ignition here, just the simple push of two buttons, followed by the choice between ‘Range’ or ‘Power’ ride modes via the TFT touch screen. Given the fact it was developed purely as a demonstrator, you’d forgive the Livewire’s somewhat short maximum travel range of 60 miles, or approximately 100km.

The unit generates close to 74hp and 71Nm of peak torque. Power is sent to the rear wheel using a specially designed single-speed transmission unit complete with a bevel gear and signature H-D belt-drive system. Don’t let the figures fool you, the Livewire felt properly quick when we took it for a quick 10-minute ride in and around SIC’s encircling access roads. 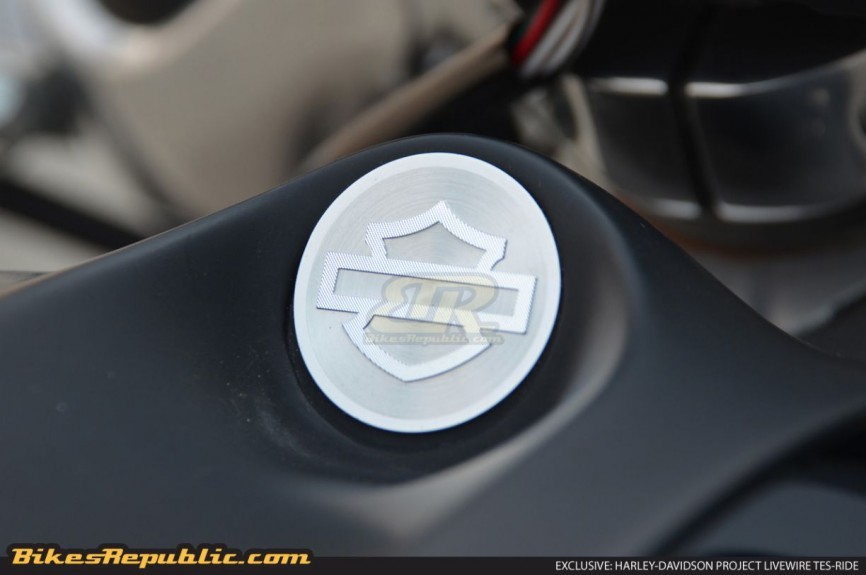 The linear and direct torque delivery sees the bike achieving the sprint from 0 to 100km/h in approximately four seconds, and felt pretty much in its prime when cruising between 100km/h to 130km/h. Throttle response felt pretty precise as well for an all-electric system. At full twist, you’d be thankful that the aforementioned low-mounted wide handlebars, which dictate a more sports-style or café racer-like crouch, are designed that way – it makes hanging on the bike much easier when getting off the line rapidly.

The other interesting bit about the powertrain is its sound, or the lack there of. Instead of the unmistakable thumpy rumble all H-D V-twins are renown for, the Livewire generates a whining sound similar to that of a spinning jet turbine. And believe us when we say that it sounds highly mechanical rather than being artificial or piped-in. More importantly, it sounds unlike any other, making truly unique and distinct to H-D just as how its V-twins are against its peers. 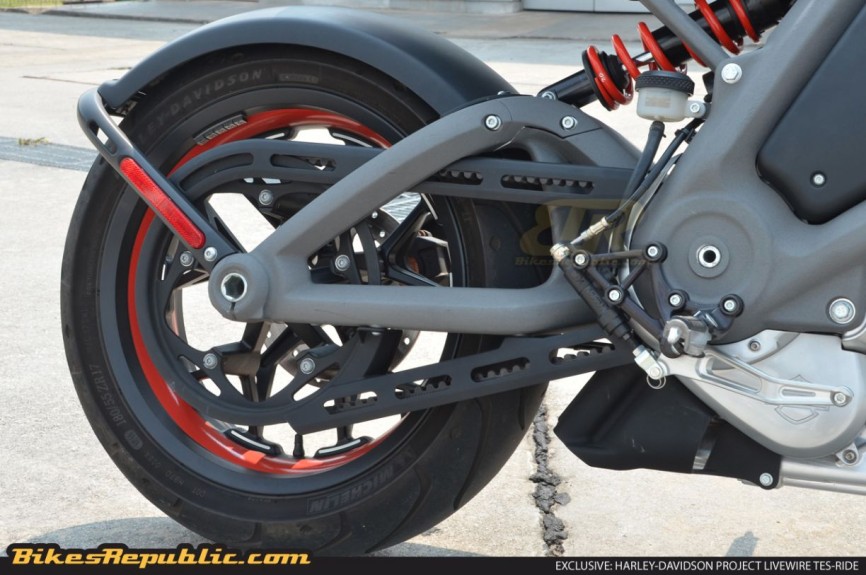 The other thing that needs some getting used to is the electric motor’s regenerative braking system. There is no ‘coasting’ mode programmed for the powertrain, meaning once you release the throttle, you can immediately feel the system kick itself in. Feeling similar to engine braking, it works to racapture energy that is otherwise wasted during deceleration to recharge the battery. This is a pretty neat trait as it helps slow the bike down further without having to apply too much strain on the brakes. 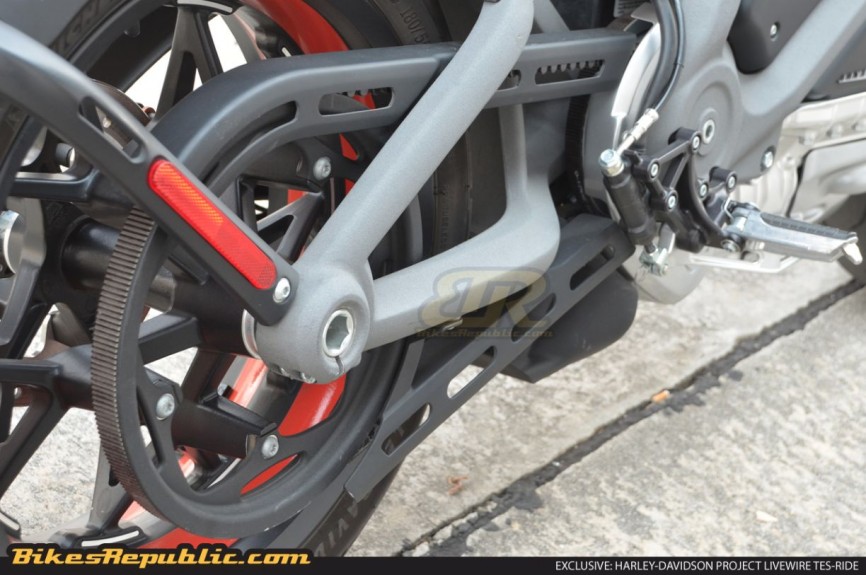 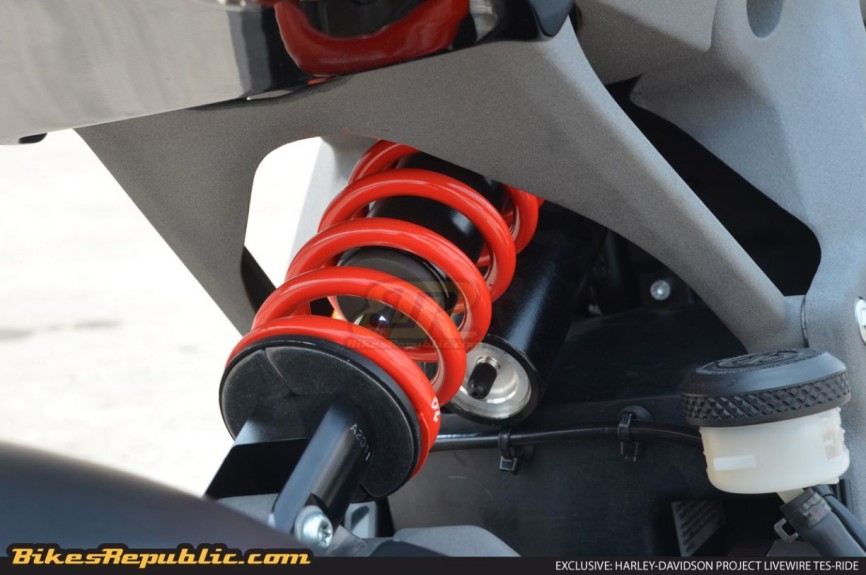 One of the biggest surprises was the Livewire’s handling characteristic, which leaned heavily on the sporty side. The lightweight but rigid all-alloy chassis is primed with a pair of upside-down Showa Big Piston forks up front, and a cantilever shock unit in the rear. Fully adjustable, the suzzies felt somewhat stiff without being too harsh, much like on a sportbike. This, along with the fair amount of ground clearance, and a decently balanced weight distribution, made manoeuvring and cornering the Livewire and its claimed 210kg (dry) mass all the more easier. 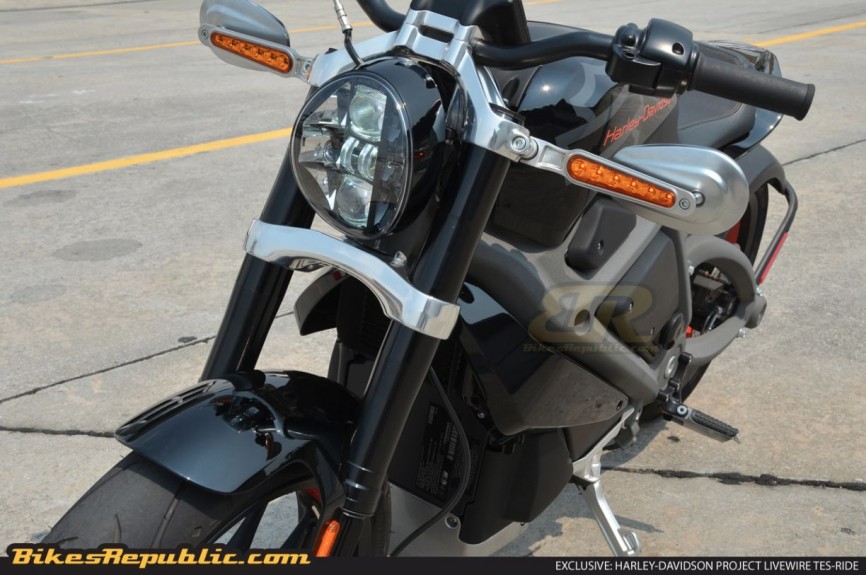 What also felt reassuring were the made-for-H-D Michelin Scorcher rubbers. Measuring 20/70-18 in front and 180/55-17 at the rear, they offered generous grip and traction levels as we rode it on the windy B-roads and access roads around SIC. These grippy Michelins proved to be quite a good match for the Livewire’s surprisingly nimble and agile nature.

Overall, the Livewire demonstrator bike is an impressive piece of design, technology, and innovation. The fact that it was built by a celebrated company that many thought would not have ventured into the zero-emissions arms race adds further to the Livewire’s cause. 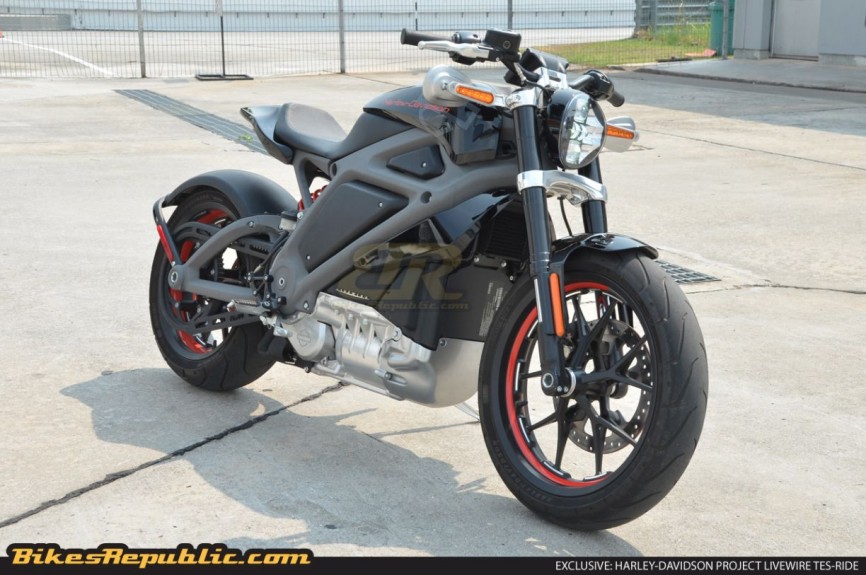 While many die-hard fans would rather not see H-D ditch its roots and traditions, we strongly agree on the notion for it to keep pressing on with developing the Livewire. With the Livewire, H-D’s prospects in the future looks certainly bright, but almost certainly electrified. 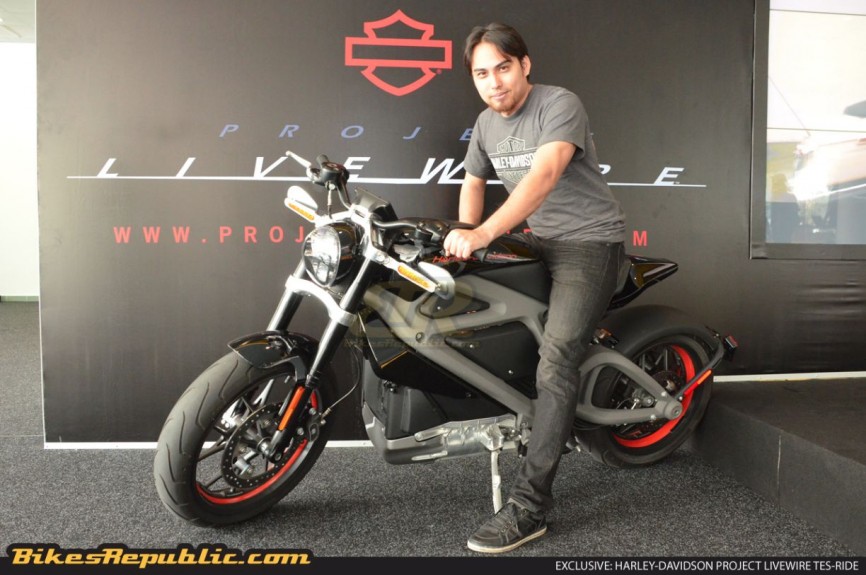 Check out our extensive gallery below for more photos of the Harley-Davidson Project Livewire from our exclusive test-ride in the Sepang International Circuit (SIC). Visit our official Facebook page to watch our exclusive video chat with local celebrity and H-D owner Jehan Miskin about the livewire. 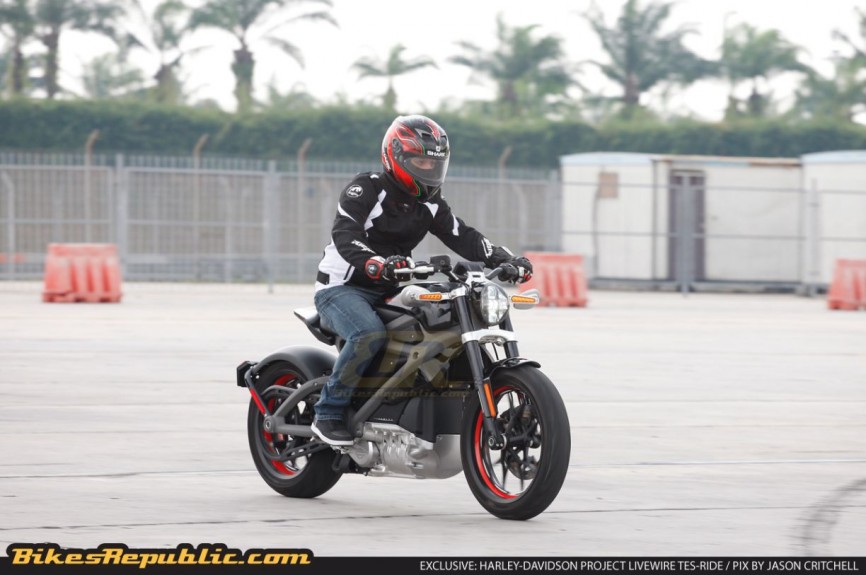