In conjunction with its 90th anniversary next year, Ducati has taken the wraps off nine new models for their 2016 range ahead of the EICMA show in Milan, Italy.

The nine models were:

The Scrambler Sixty2, which Ducati is targeting towards new riders and new markets, is powered by a 399cc, 41hp desmodromic air-cooled L-twin, with styling largely identical to its larger capacity siblings in the Scrambler range. Its Sixty2 moniker is drawn from 1962, the year of the first Ducati Scrambler. 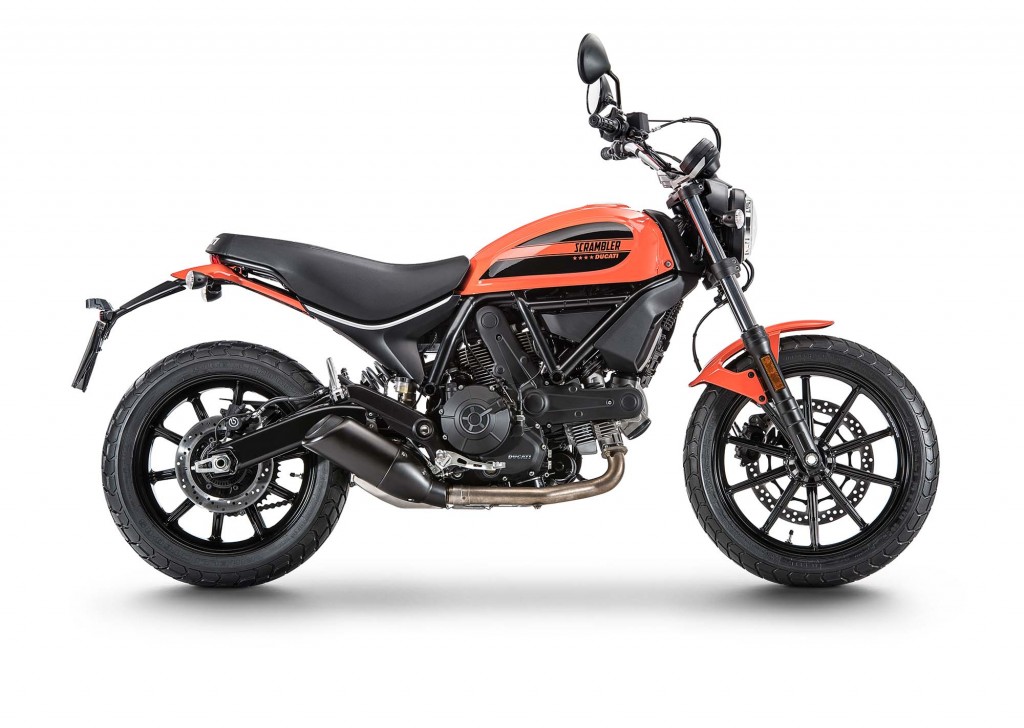 Based on last year’s Scrambler’s 803, the Scrambler Flat Track Pro features a dedicated livery, side panel and seat along with a full throttle exhaust. Inspired by Ducati riders Troy Bayliss and Johnny Lewis at the 2015 American AMA Pro Flat Track championship, the model also comes with low variable section handlebars, a Termigoni exhaust and alloy wheels. 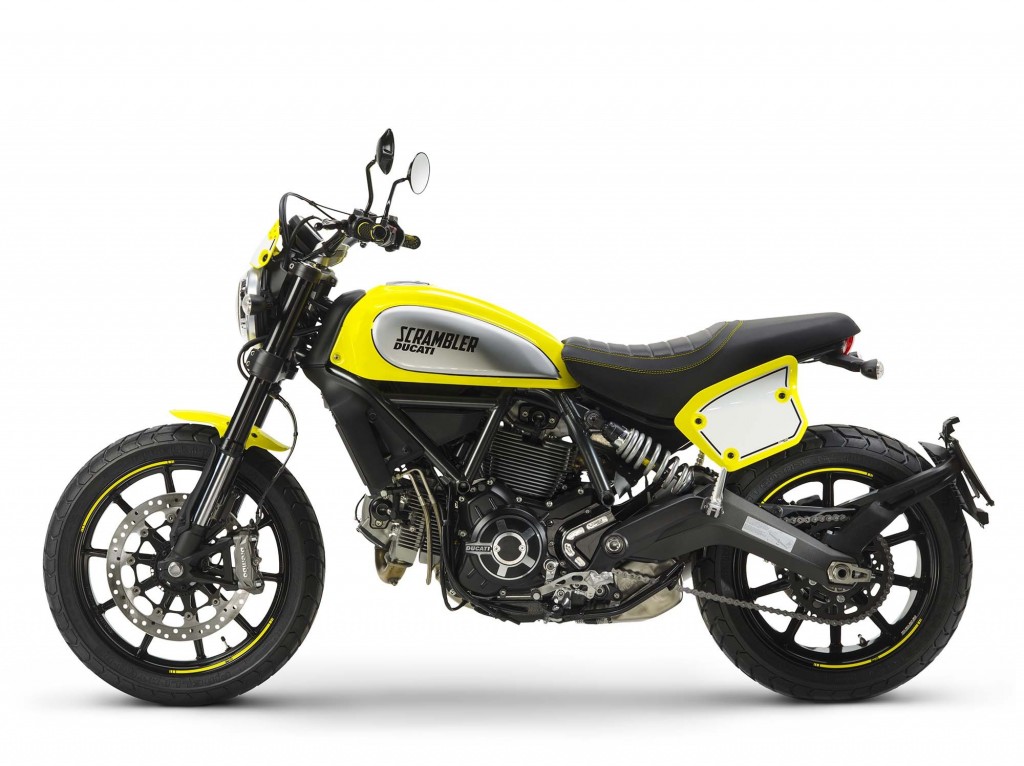 Designed to go against bikes like the BMW R1200GS and the KTM Adventure 1190, the new 1200 Enduro is a reworked machine that was built primarily for off-road use with 19 inch front and 17 inch rear spoked wheels, semi-active Sachs suspension and a massive 29-litre fuel tank, which Ducati is claiming will get up to 448km per tank. According to Ducati, the new Multistrada is its first full-fledged off-roader, and comes with a huge range of accessories designed exclusively for it, including all aluminum panniers and top boxes. 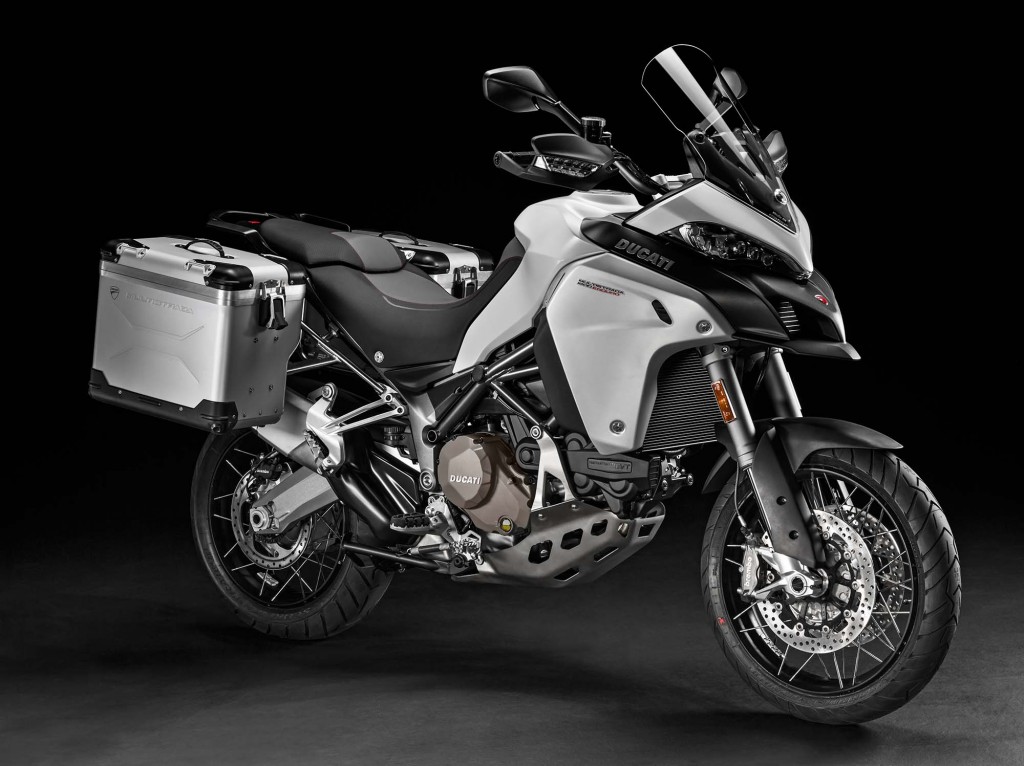 The 2016 Multistrada line sees a continuation of the Pikes Peak nameplate, and the same style of upgrades on the DVT version of the Multistrada 1200. Notable features include an Öhlins fork and Öhlins TTX36 shock, Termignoni mufflers, a carbon fiber windscreen, red stitching on the seat, and stripes on the 3-spoke wheels. 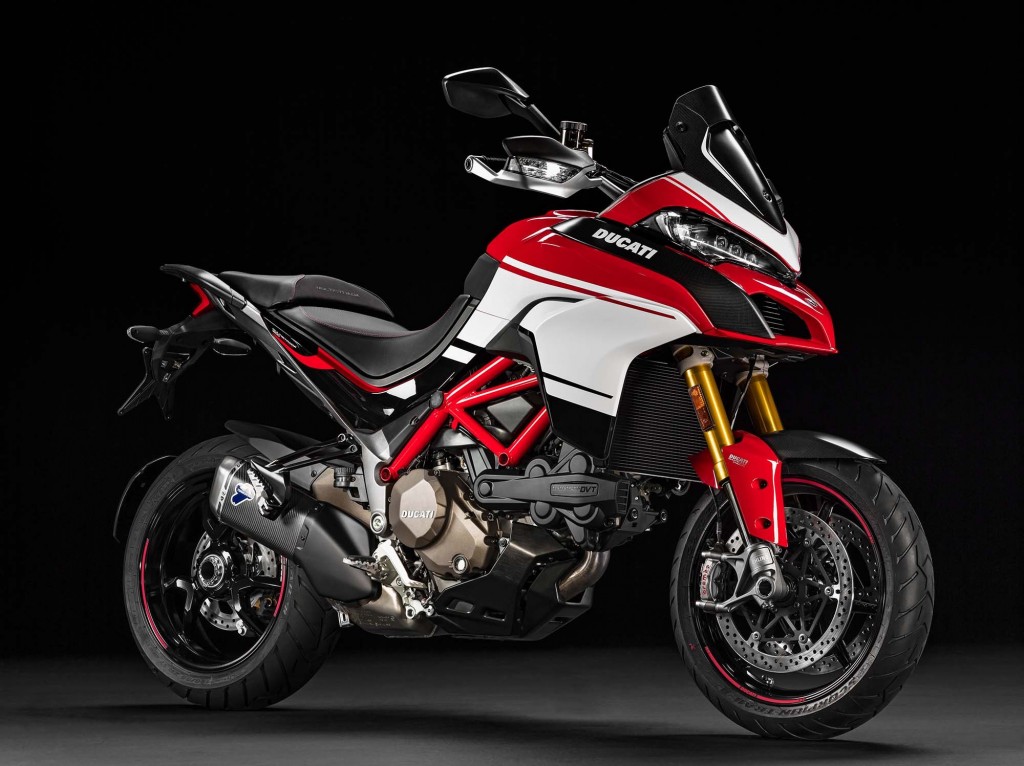 Featuring an aggressive ground-up redesign from the 2011 Diavel, the XDiavel is the first Ducati to come with belt drive, and is aimed at those looking for a cruiser. The main highlight of the XDiavel is that its ergonomics are adjustable up to 60 different positions, with a standard fitment which includes an extended seat and passenger backrest. Power on the other hand, is supplied by a 1262cc Testastretta DVT (Ducati Valve Timing)-equipped L-twin that’s been tuned for massive low-rpm torque. 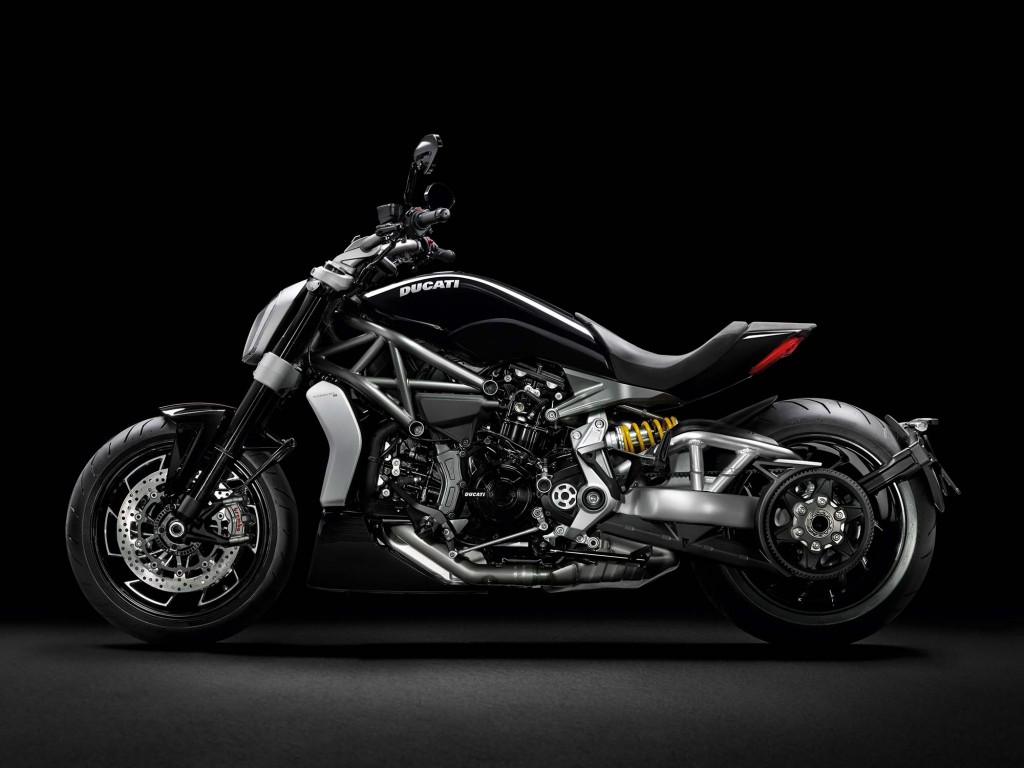 The Ducati 959 Panigale is essentially the updated 899 panigale with bigger engine capacity, more power and some stylistic and feature related changes. Sharing the stylistic features with the bigger 1299 Panigale, Ducati claims that the 959 is a more useable everyday bike which is also a potent race track tool. 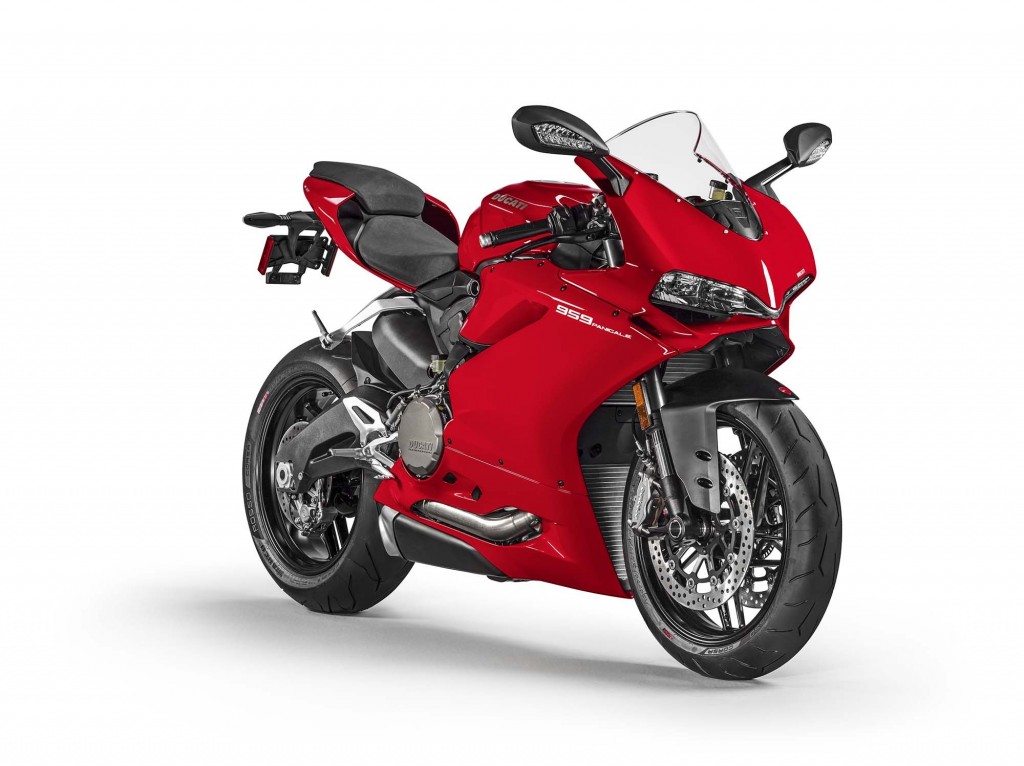 For 2016, Ducati has fitted the Hypermotard with a larger, more powerful 939 motor which will also power the track-oriented Hypermotard 939 SP, as well as the touring-tuned Hyperstrada 939. All three bikes will have fully adjustable suspension, Brembo brakes with Bosch-backed ABS, adjustable traction control, and ride modes. 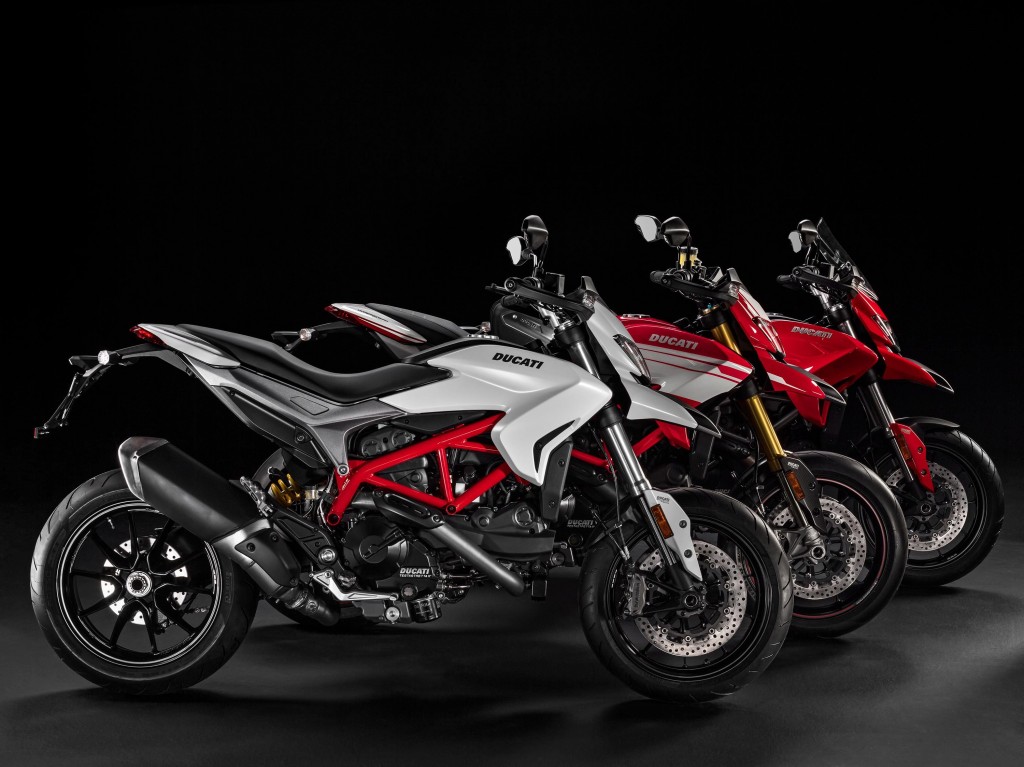 Check out more pictures in the extensive gallery we’ve prepared below.