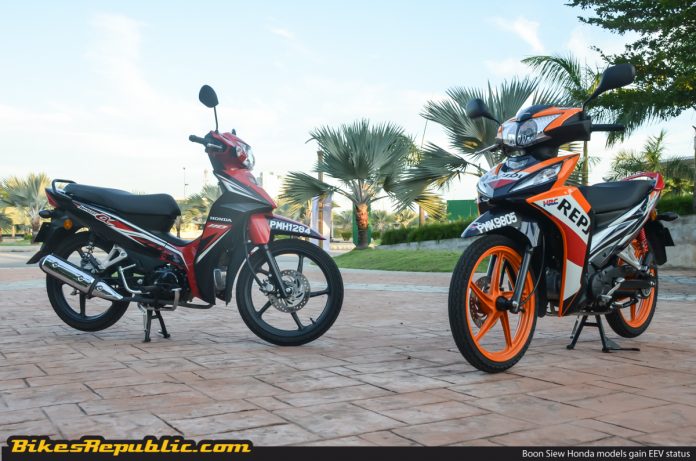 Boon Siew Honda Sdn Bhd marked a major milestone this week after the firm was able to garner EEV (Energy Efficient Vehicle) certification for four of its models that are currently on sale in the local market.

Effectively, Boon Siew Honda has become the first major motorcycle manufacturer in Malaysia to gain EEV status for its products under the New Automotive Policy 2014 (NAP 2014).

The EEV class was announced in NAP 2014 where it classifies vehicle that meets carbon emissions and fuel consumption standards issued by the Malaysian Automotive Institute (MIA) across several categories. For motorcycles with engine sizes between 101cc and 150cc, EEV status is granted if its fuel consumption is less than 2.2 litres/100km.

Instead of just one model, Boon Siew Honda found that four of its cub models with said EEV standards. Included amongst the four are the EX5 Dream Fi, Honda Wave Alpha, Future Fi, as well as the Wave Dash Fi.

(Note: All modes except Wave Alpha are equipped with electronic fuel injection)

Boon Siew Honda were also keen to highlight that it has already produced a total 49,324 units of these four EEV-certified cub models combined between January and July this year. This sees them making up 83% of Boon Siew Honda’s total output within said period as well.

Having been awarded EEV status, Boon Siew Honda further noted that these four models will now feature Honda EEV wobblers on their front headlights when displayed in Honda dealers. This is meant to make them easily identifiable for customers when they walk in to any showroom or authorised dealer nationwide.