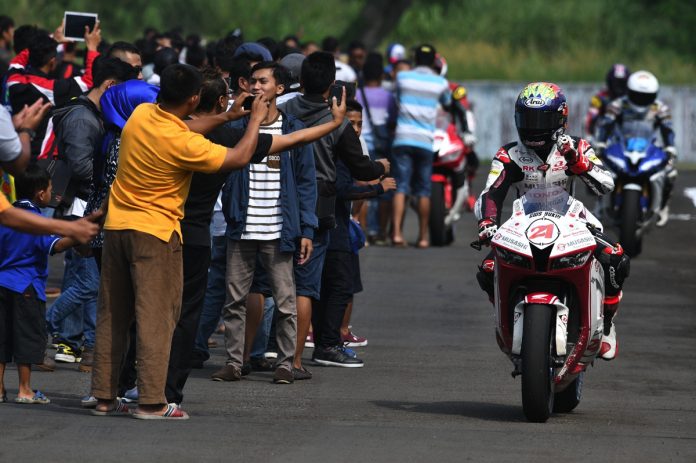 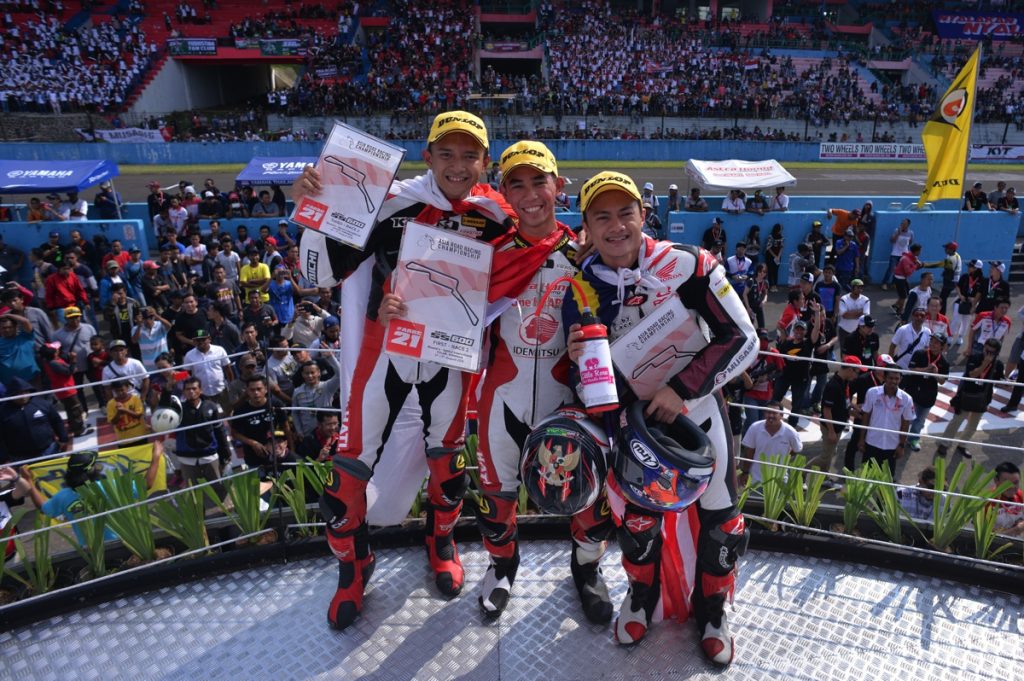 Fresh off his stint in the Suzuku 8 Hours endurance, national rider Zaqhwan Zaidi arrived in Sentul, Indonesia last weekend for Round 4 of the Asia Road Racing Championship (ARRC) on a strong note.

Astride the MUSASHi Boon Siew Honda Team’s CBR600RR race machine, Zaqhwan kicked off his weekend by scoring a third place in Race 1. Sharing the podium with him here was Honda-powered Indonesians Dimas Ekky Pratama and Gerry Salim with the latter rider taking victory in Race 1.

Zaqhwan was on still on a high charge again in Race 2 where he pulled off a sensational overtaking manoeuvre on the final lap and finished higher in second. The race win belonged to Gerry again whilst his teammate Ekky settled for third. 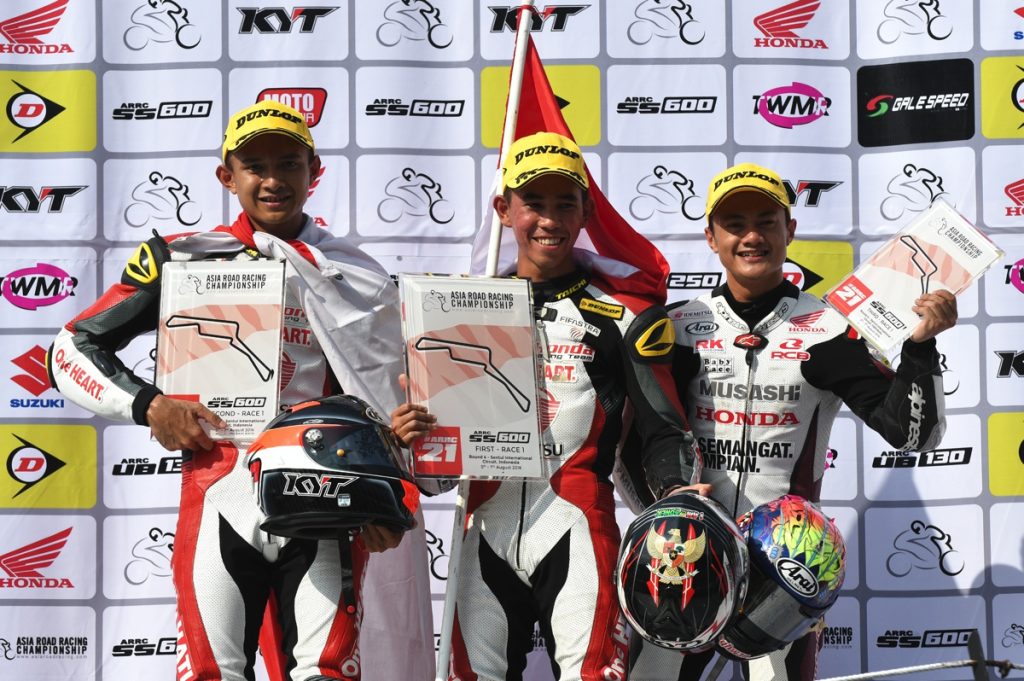 Though Gerry scored two sweet victories on home soil, it was Zaqhwan who came out of Sentul as the biggest winner. The point scored from his double podium finish sees Zaqhwan now tied for the lead in the SuperSport 600 category’s championship standings with Japanese rider Tomoyoshi Koyama with 131 points.

Suffice to say, the race for SuperSport 600 champion’s title this year has only just heated up between Zaqhwan and Koyama with just two rounds left. 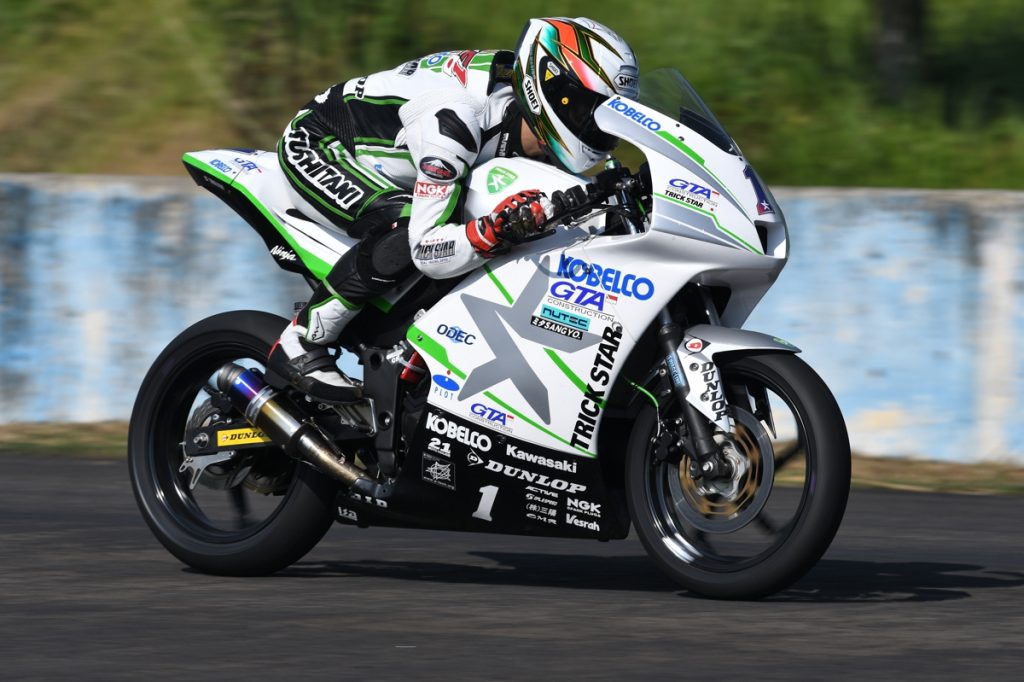 As Race 2 unfolded, Yamamoto settled for second place instead whilst Thailand’s Apiwat Wongthananon took victory astride his Yamaha. Coming in third place here was yet another Yamaha-powered rider in the form of Yusuke Nakamura. With his race win, Apiwat was able to solidify his lead in the AP250 championship standings further with his current score of 171 points.

In the UB130 category, Malaysian rider Helmi Azman took a sweet maiden victory in Race 1 astride his Yamaha machine. Joining him on the podium was Indonesia’s Wahyu Nugrah in second who was also riding a Yamaha, followed by Honda-powered Malaysian rider Md Amirul Ariff Musa in third.

Race 2 saw Yamaha-powered Indonesian rider Wahyu Aji Trilaksana scoring victory instead. Malaysians Ahmad Fazli Sham and Norizman Ismail completed the podium by finished second and third respectively. With his win, Wahyu Aji Trilaksana was able to elevate himself up the UB130 championship standings and now leads it with 88points.

Round 5 of the ARRC 2016 season will resume from Oct 29 to Nov 1 in the Buddh International Circuit, India before the season concludes in Buriram, Thailand for Round 6 that scheduled from Dec 1 to Dec 4.